The Champs-Élysées then and now

The first time that I met Ronan and Erwan Bouroullec was about 15 years ago in their former studio in St Denis, a downtrodden suburb just north of Paris. By then, Ronan had already been fêted for his Cuisine Désintegrée modular kitchen and Erwan for his Lit Clos, an enclosed bed in a box on stilts. The brothers soon began co-signing their work, becoming known for object design and micro-architecture. Today, their spacious studio is in Belleville. The main, two-storey part where ideas are developed and models are made is on one side of the courtyard while a new meeting room displaying some of their maquettes and furniture is on the other side.

Who could have imagined that in 2019 the Bouroullecs would be inaugurating six new fountains for the Champs-Elysées on the most prestigious roundabout in Paris? A rotating verticality of geometric lines, glittering Swarovski crystals, LED lights and flowing water is what the brothers envisioned. Balancing “the monumental and the delicate” and featuring 3,060 crystals cut by Swarovski in Austria, the fountains are the largest project designed by the French brothers. Each is composed of three diagonal branches around a 13m-high bronze, central mast; the water rises through the mast and descends through the branches into the basin.

Balancing “the monumental and the delicate” and featuring 3,060 crystals cut by Swarovksi in Austria, the fountains are the largest project designed by the French brothers. Each is composed of three diagonal branches around a 13m-high bronze, central mast; the water rises through the mast and descends through the branches into the basin.

The roundabout’s history harks back to 1670, when it was designed by André Le Nôtre. Jacques Ignace Hittorff’s first fountain was created at its centre in 1817 but later demolished as it disrupted traffic flow. Adolphe Alphand redesigned the roundabout, making six basins with fountains resembling cast-iron reeds. René Lalique added ornamental glass pieces that were replaced by a more robust design by Max Ingrand. The fountains were shut down in 1998 after being damaged by football fans celebrating France’s World Cup victory.

Costing €6.3m, the project has been financed by Fonds pour Paris, a foundation to restore Parisian heritage and support contemporary art that was set up by Paris mayor Anne Hidalgo; donors include Groupe Galeries Lafayette, Groupe Dassault and the State of Qatar.

A mammoth undertaking, it has involved 40 companies and more than 250 people working on the design and building. The fountains were installed by Atelier Blam Lemunier & Meyer from Nantes.

SayWho spoke to Ronan Bouroullec about his evolving ideas for the project, the decision to inverse the classical notion of a fountain and the growing importance of outdoor public projects in the Bouroullecs’ work.

What initiated the Fonds de Paris contacting you in 2015?

This project began after our exhibition, Rêveries Urbaines, in Rennes about the city and objects for the city. Since this exhibition that has travelled worldwide, the commission for the Fonds de Paris came along.

How much did the final project differ from the original proposal?

At the beginning, I thought that it would be a lot bigger. The first maquettes were 17m high as I originally thought they needed to be closer to the scale of the trees. There was a permanent doubt about the scale for three years, going back and forth between the Champs-Elysées and the maquettes in order to understand how the project would physically feel. The 13m height is one metre higher than the street lights and a few metres lower than the trees, so it’s a balance between the two. In order to grasp the exact proportions and harmony, we made a lot of small-scale maquettes and seven maquettes on a one-to-one scale along the Loire in Nantes where we could pump water. 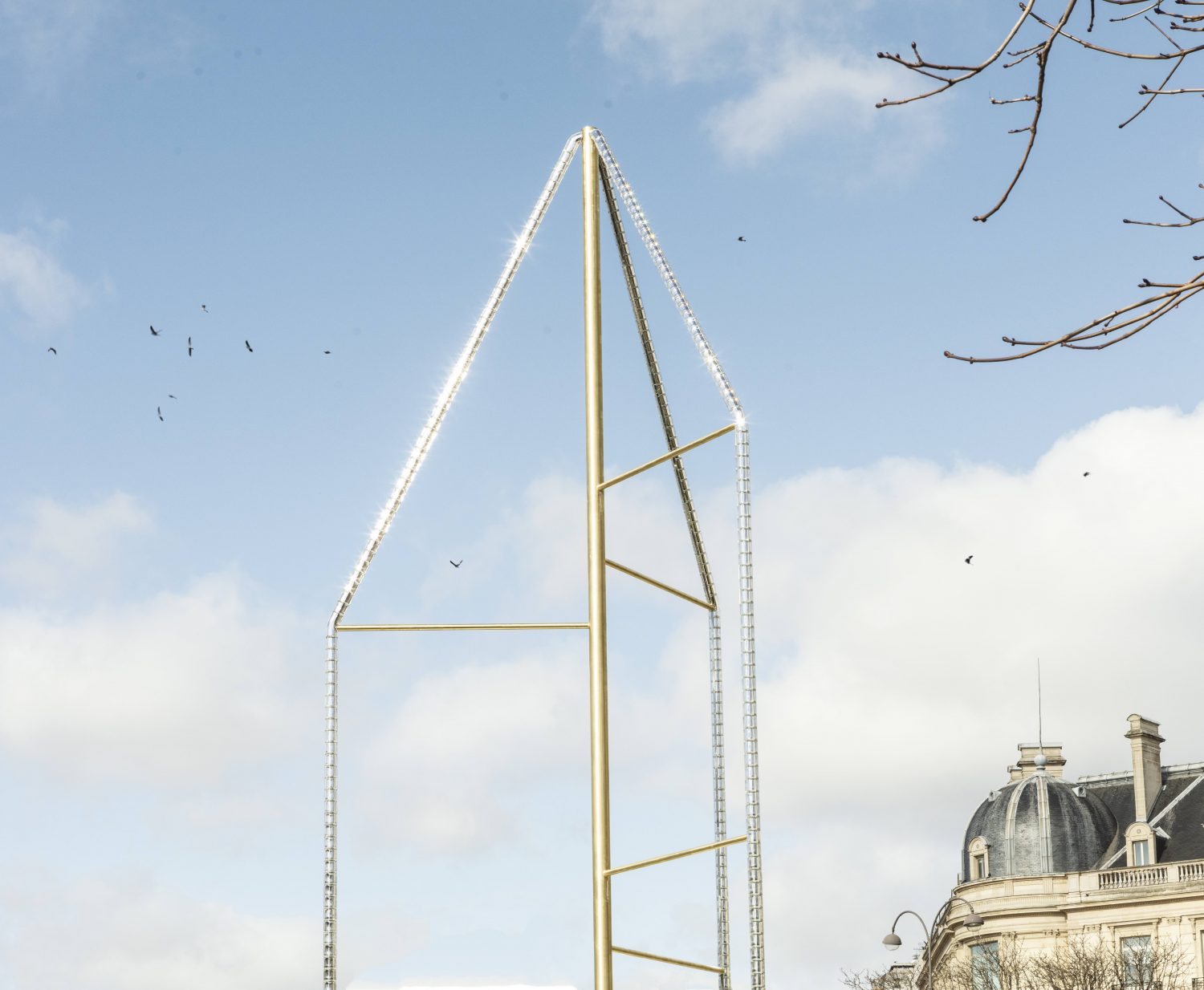 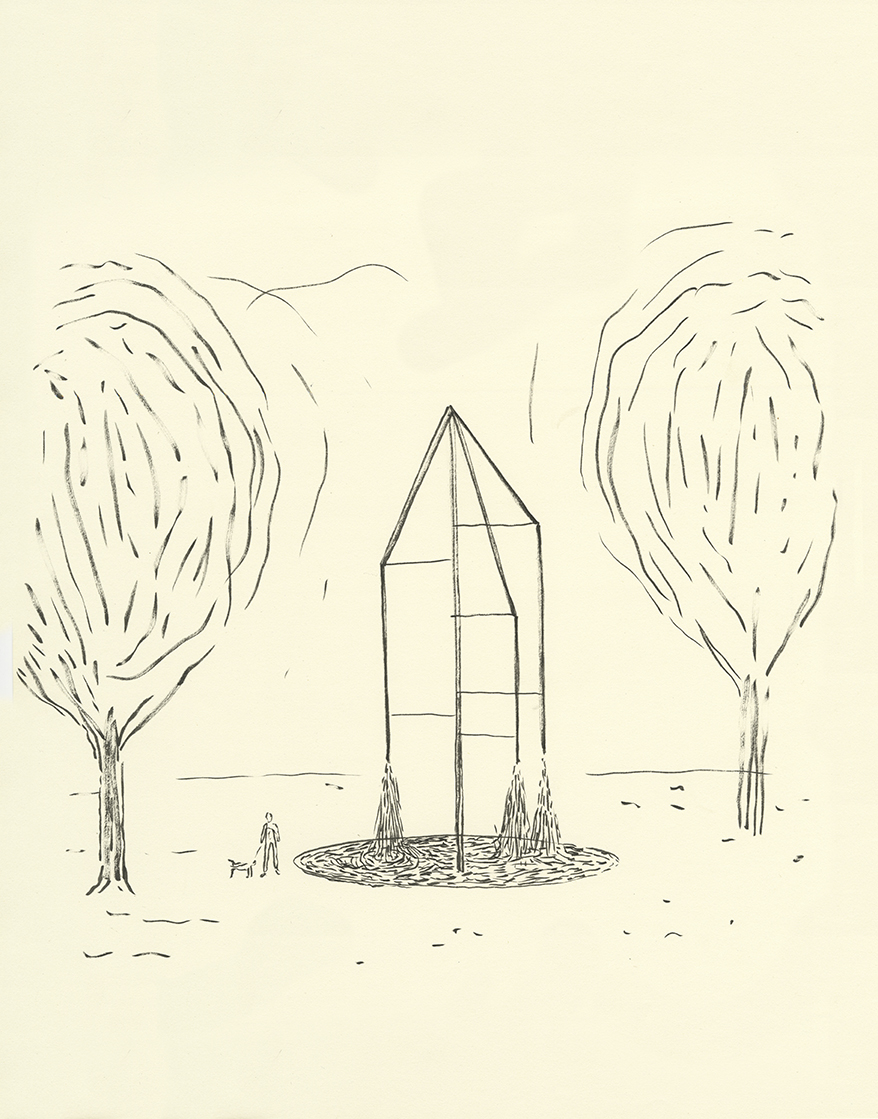 So it was a process of continual questioning?

That’s my permanent process. I’m never sure of myself until the end and even now I’m still asking myself questions.

The six fountains each have three branches of differing diagonal lengths. But your original idea was to have five branches on each. What changed your mind?

Until a year ago, each fountain was going to have five branches. But I wasn’t totally aware of how this would correspond to the quantity of the six fountains. I think it would have been too much to have five branches multiplied six times. Having three branches on each fountain gives more transparency. The idea was to have soft branches that could move a little in the wind but the calculations showed that it was too risky and didn’t correspond to the norms. The verticality and rotation were there from the start but became far more refined. A lot of people who saw the process or the drawings told me that they were more touched by the real object. It’s often the opposite because there’s always something imaginary in drawings. What the drawings didn’t capture was the movement and variety of the different aspects.

What were you aiming for and what considerations did you give to the location?

The aim was to be mimetic, like a chameleon, that at certain moments of the day, despite their size, the fountains could almost disappear into the background, with the reflections of the trees and the sky. When the sky is grey, the fountains are very grey. When the sky is blue, the fountains glitter a lot more. When the sun sets, the reflections are very strong on the vertical side. If one walks up from the Place de la Concorde and sees it from a distance with the sun setting, it’s like there are dazzling flashes from time to time. The idea was to have a softly diffused light which is at 20% of its possible strength because I wanted the mirror to continue to function even when it’s illuminated. At night, it’s another situation again; the car headlights and street lights produce a vibrating, sparkling effect. During the winter, when there’s no water, the fountains will continue to turn and the lights will come on in the evening. We aimed to give symmetry and balance back to this square. What’s striking looking at the 19th and 20th century photos is that the avenue had perfect symmetry and perfectly placed street lights. But when we started thinking about the project, the roundabout seemed chaotic. You no longer noticed the fountains because of the flowers planted around them. The idea was to find the geometry again and make something vertical that gave a precise vision. We were looking for materials with a certain quality, so that if the fountains are still there in 20, 30 or 50 years, they’ll age nicely with a pretty patina, and a historic continuity. 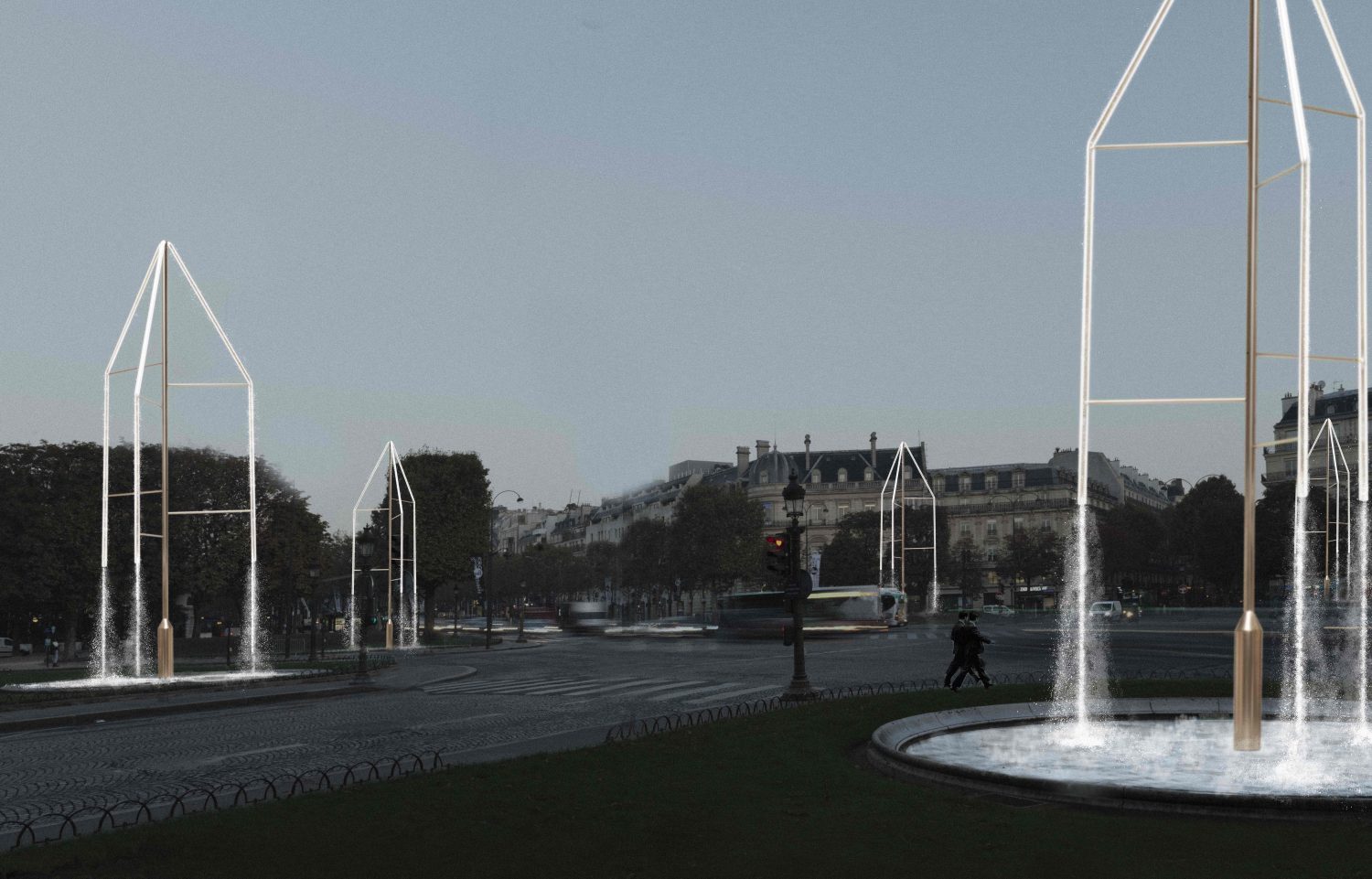 How much did you look at archival material and how did this guide your design?

We looked a lot but without being too crushed by the weight of history. It was more of an organic influence, taking certain elements and observing why they didn’t work any more. Alphand’s fountains were designed in the form of small, pretty reeds. Lalique designed something quite beautiful in glass with pigeons and squirrels and jets of water around them. Then Max Ingrand designed something in bronze. That’s why we used bronze and glass. Normally fountains are small and the water jets out. Here it’s the opposite: they’re very big and the water flows down. It’s an observation I made afterwards! The idea wasn’t to inverse everything but this vertical necessity seemed obvious in order to find elegance and relevance that I had to convince people about. I’ve never had to give so many presentations with maquettes in my life. There’s a certain audacity in deciding to do something the other way around because we could have designed a pretty piece jetting out water and everybody would have been pleased. Now the fountains are there, I have the impression that they’ve always been there.

What obstacles did you need to overcome?

We had to design the project as an iceberg because each fountain’s axis is implanted underneath a basin. There were obstacles and complications everywhere – each mast tube is made from six bronze portions and we had to create patents regarding the crystal’s solidity and how it’s stuck onto the structure.

Were you concerned that the project would be criticised, particularly given the recent Yellow Vest protests on the Champs-Elysées?

Paris is a city that’s very hard with all new proposals and rejects a lot of them. Everybody wanted the Eiffel Tower taken down. People opposed I.M. Pei’s pyramid for the Louvre. Even in the 16th, 17th and 18th centuries, any novelty was considered aggressive for the city. I’m almost disappointed that there hasn’t been too much criticism! Of course there are people that don’t like it, which I can totally understand. If there’s been any criticism, it’s more about the purity and simplicity that associates a certain modernity. But it’s mostly been accepted. It’s intended to serve this site and find a cheerful, pleasurable, joyful solution through rigour and beauty. It’s not about giving myself a personal sense of pleasure. What fascinates me about the Champs-Elysées is the extraordinary variety of the public, from the lowest to the highest level of society, 300,000 pedestrians every day. Nearly a million people every three days, which is crazy. I spent three weeks on site [for the installation]. As soon as the water began flowing and the rotation started, people came to do selfies and be photographed on the lawn for their weddings. That’s a popular success that touches me. 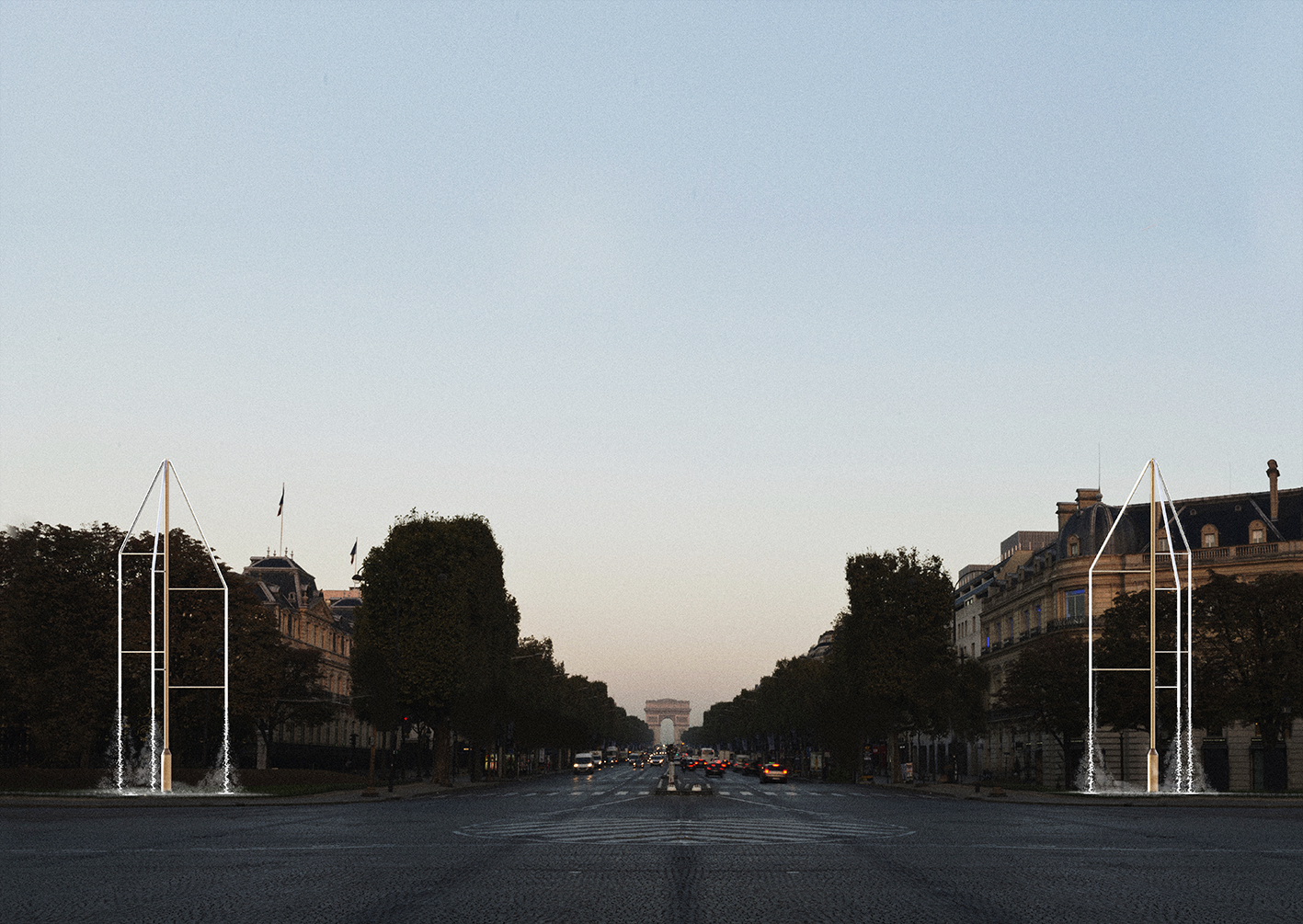 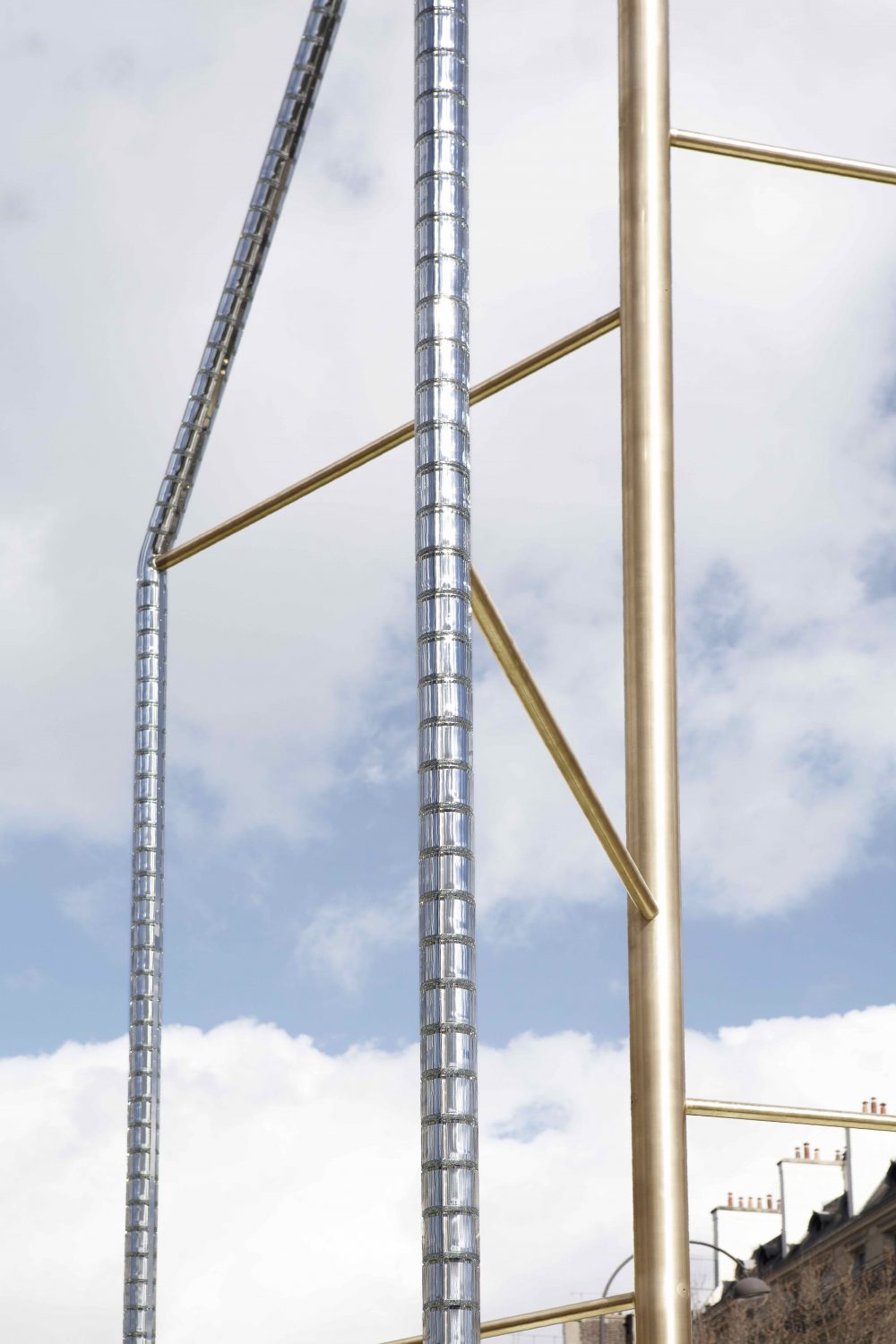 Did you and Erwan have many arguments about the project?

It’s like our work in general. There are always arguments, on anything. I’m very interested in public projects whereas Erwan is more focused on mechanics and other kinds of projects.

What other outdoor projects have you been working on?

We’ve also made an outdoor project for Miami and for Vitra’s campus in Weil-am-Rhein, Germany. The Miami project is a canopy along an avenue in the design district and was inaugurated in December 2017. The Vitra project is a very low, 13m-long fountain that’s like a stream in a park and was inaugurated last summer. We’re also preparing another project in Rennes that’s like a belvedere on the river and that you reach by a footbridge.

Does this interest in outdoor commissions represent a change of direction for you?

Yes, after 20 years of working I’m certainly frustrated that our work doesn’t address a wider public. The design pieces made for [furniture and lighting] companies are for bourgeois, well-off people. I miss not doing projects for everybody. I think cities lack things that can give them an extra value and poetry. As I’m getting older, I need to do things that exist physically.