The gap between the life retained in the body and what remains elusive always fascinates me.

The Northern Irish artist Claire Morgan won the 12th edition of the Drawing Prize of the Daniel and Florence Guerlain Contemporary Art Foundation, worth €15,000, earlier this year. Her three haunting drawings of foxes were exhibited at the Salon du Dessin held at Palais Brongniart, 27 March-1 April 2019, alongside works by the other two nominated artists: France’s Jérôme Zonder and Friedrich Kunath from Germany, who each took home €5,000. Now she has an exhibition, ‘As I Live and Breathe’, at the Horniman Museum and Gardens in London. Morgan’s large-scale drawings of foxes, which clinched her the Guerlain Drawing Prize, combine figuration and abstraction and are revealing of her preoccupation with animality and mortality. They form part of her wider practice, along with paintings and taxidermy-based sculptures where the animal’s movement is frozen in time in geometric compositions that often evoke nature. Born in Belfast in 1980, Morgan studied Fine Art (Sculpture) at the University of Northumbria in Newcastle and taught herself taxidermy after attending conferences hosted by the UK Guild of Taxidermists. She is based in Gateshead, northern England, where she lives near the countryside, and is represented by Galerie Karsten Greve (Paris/Cologne). SayWho spoke to Claire Morgan about her drawings, taxidermy and exhibition in London.

How would you describe the relationship between your drawings and taxidermy?

I’ve always drawn animals as part of the taxidermy. Before you take an animal apart, you need to take down its measurements. Generally, I lie it down on a page of paper and draw its outline, measuring things like the distance from the tip of the nose to where the eye starts and ends. This enables me to reconstruct an accurate body when its skin is put back on. I became really interested in the marks that were left on the page by accident, like blood, mud or claw scratches. I started using them as a starting point for my drawings and introduced geometric forms that were related to my sculptures. I also put carbon on the animal’s fur in order to create prominent marks as I manipulated its body on the paper. There’s a dialogue between what the body would have done naturally and the direction I’m trying to push it in. The drawings were initially preparatory but began getting bigger; now they are completely separate from the sculpture. 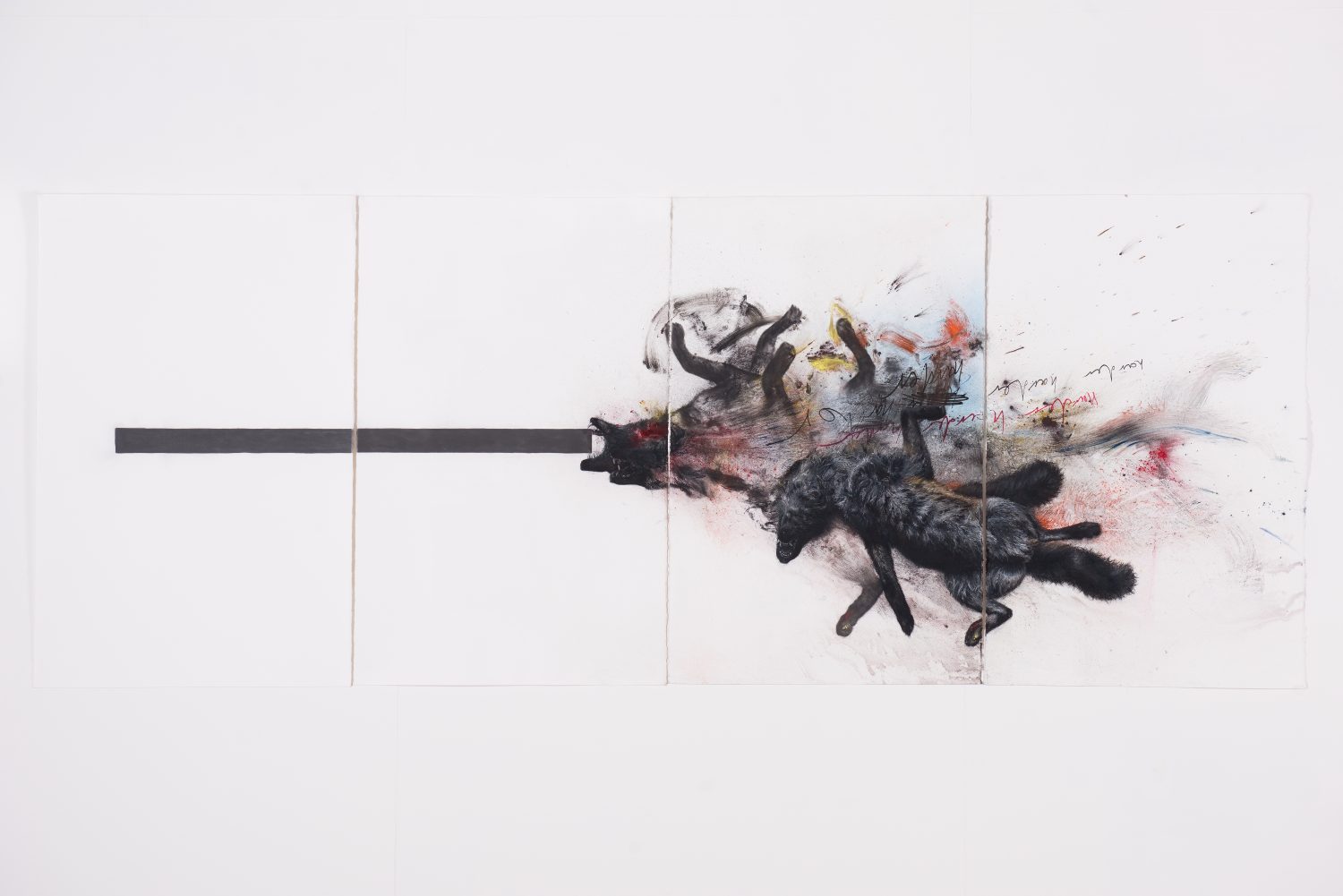 I envisioned an animal hanging onto this block by its teeth and for it to be unclear whether it’s hanging on for safety or attacking or moving, or perhaps it’s something more abstract. It’s like the tension between the two extremes of beauty and violence and trying to find a balance. In the studio, I had a frozen roadkill fox that I hung from the ceiling. Then I photographed and filmed it rotating while it was suspended. Later, I moved its body onto the surface of the paper, trying to explore how its spinning movements had happened. The scratches are from the fox’s paws and there’s the imprint of where his tail, which I’d dipped in carbon, splashed onto it.

What attracts you to foxes in particular?

Foxes exist on the periphery of the synthetic, rectangular environments we’ve made for ourselves and the wilder, untamed world. They’re incredibly beautiful and I feel a connection with them somehow: they embody something wild, untameable, intuitive, visceral, maybe even carnal.

What drew you to making sculptures with taxidermy?

All my work has been concerned with death and the unknown. I’d been using bits of foxes and, as the role of the animals became more significant, I wanted to have more control over their physical presence in my work. My sculpture was moving towards a preoccupation with observing time by attempting to halt it on some level. I started learning taxidermy because I had this idea of a fox standing up in this piece Fantastic Mr Fox [2008 – a fox entering a tilted cube composed of fragments of torn, black polythene bags]. The first time I handled a fox for taxidermy, I was absolutely terrified. I was in a little room on an artist’s residency, screaming by myself while I was cutting it. I’d been a vegetarian since I was 12 and was so scared of touching the fox that I couldn’t do a decent job. But over time it’s become quite normal to be handling animals in a certain way and you learn more about anatomy. I’m fascinated by what sense of life is retained in the animal’s dead body and what remains elusive. 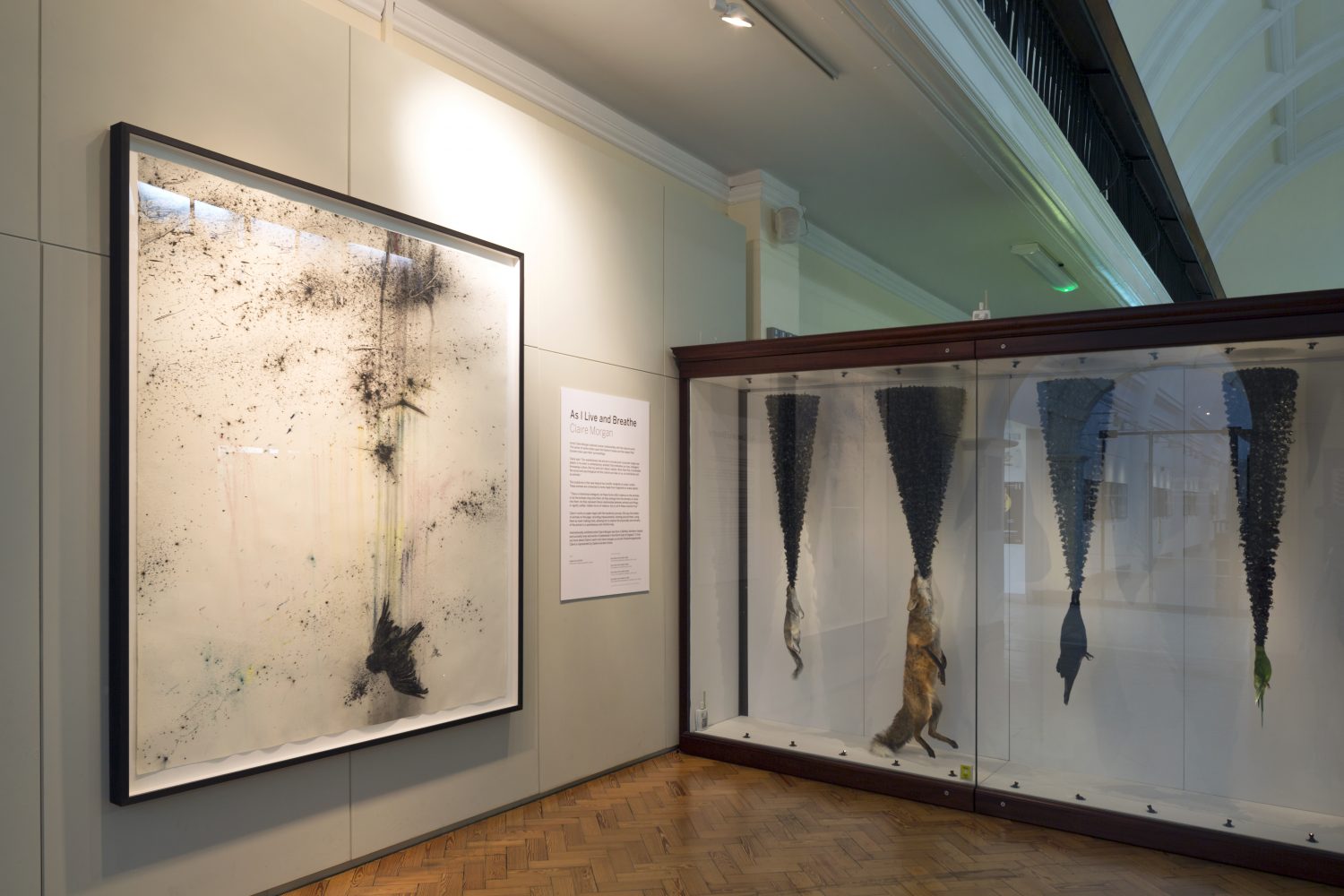 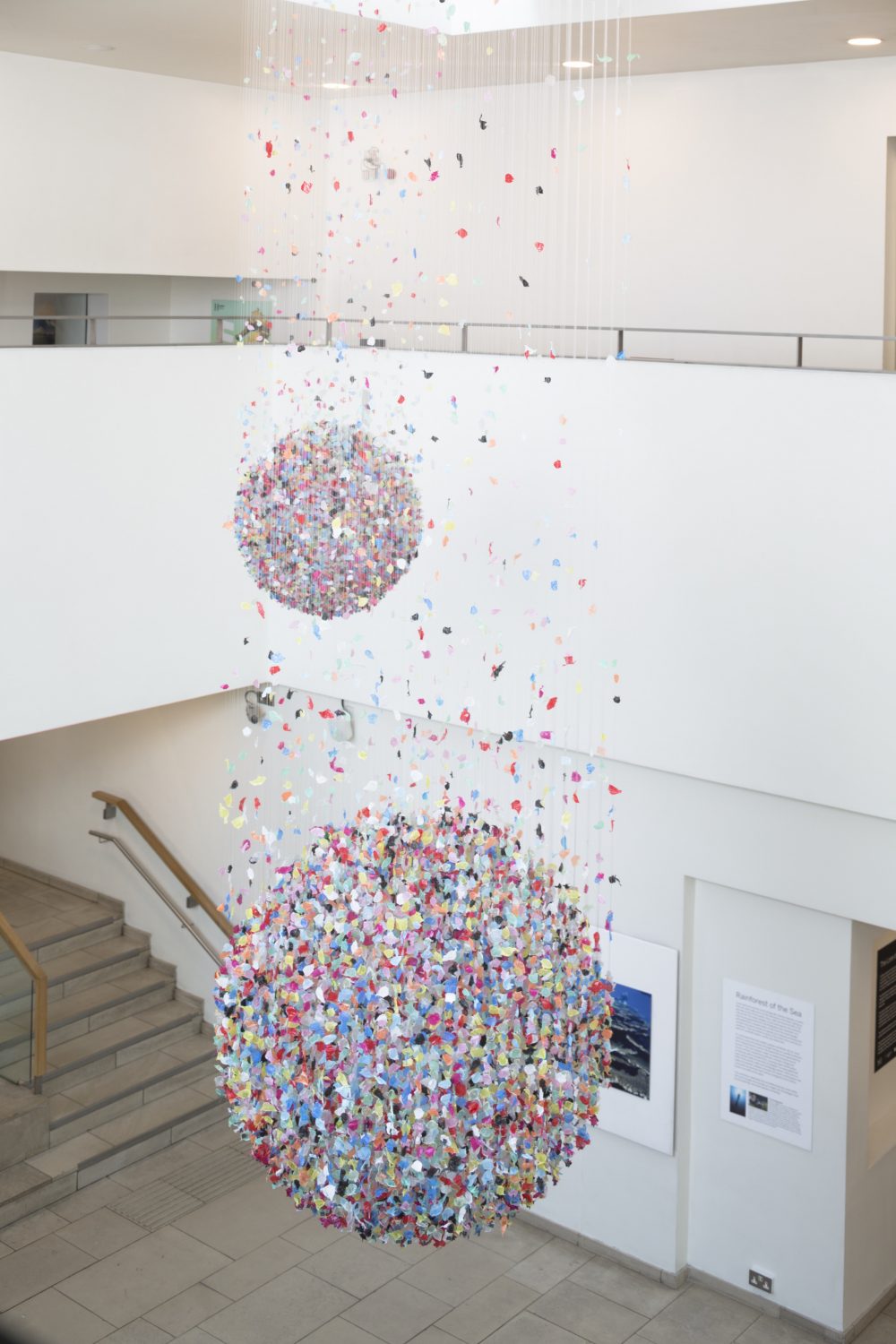 Where do you get the animals from and where do you keep them before transforming them into taxidermy?

A lot of people know what I do, so if they find a dead animal in the road or if their pet kills something, they bring it to me or call me about it. Other taxidermists also exchange with me and my five cats bring me mice and rats. I have four freezers of dead animals: a badger, some foxes, squirrels, a lot of mice and rats, and garden birds and tropical birds.

What are you presenting in your exhibition, ‘As I Live and Breathe‘, at the Horniman Museum and Gardens in London?

I’m showing four sculptures each involving an animal that’s a resident of London: a fox, a grey squirrel, a crow and a parakeet that are all regarded as pest species. They’re connected by their mouths to cones made out of black plastic fragments. In the atrium, there’s a large installation [of three spherical forms] made from multi-coloured polythene fragments of used shopping bags.

Do you consider your work to be political?

I’m concerned with environmental needs and waste as a symptom of our growing greed for things, which is a fundamental problem in our society. We want to pretend that we’re immortal; surrounding ourselves with more and more possessions is related to our unwillingness to confront the reality that we’re animals and are going to die. But I’m not trying to tell anyone a specific, political message. It’s more a case of asking myself questions and exploring things that scare me.

The exhibition “As I Live and Breathe” at the Horniman Museum and Gardens in London is open until 4 May 2020.