« The image we send is not just an image, it’s a call, a question to be answered. It starts a conversation. »

Visual artists Edouard Taufenbach and Bastien Pourtout create their work in the present, and always as a conversation. After their first encounter at Paris Photo in 2018, they came to develop a common practice during their “lockdown residency” at the Villa Medici in Rome. The experience soon gave birth to a photographic series on swallows. Separated upon their return to Paris, Edouard and Bastien began to use images, and images only, to communicate. They used the same process to create the ‘Obsession Dietrich’ exhibition at the Galerie du Passage – Pierre Passebon. From February 15 to March 15, the duo of artists drew from the exceptional photographic collection of the gallery owner, passionate about the image of Marlene Dietrich, to create unexpected dialogues between her many faces through the ages. An exhibition designed as a perpetual conversation between the artists, but also between Pierre Passebon and his muse, for the most part put together through Instagram’s private messages…

How did you meet and start working as a duo?

Bastien: This is not the first time Edouard has worked with someone’s photography collection. His series titled “Spéculaire”, made from Sébastien Lifshitz’s collection, had already been exhibited at Paris Photo in 2018. It was on this occasion that I met him. We became friends and started working together informally. Until we started working on the swallows series, then our collaboration turned into a real duo, following our residency at the Villa Medici during lockdown. We stayed there to make images of the swallows, then the project evolved and took on another dimension, and our work together developed naturally.

Edouard: We invented new projects together and set up new systems. Before, it was almost impossible to understand the part and the contribution of each other within the work. We took a long time to set up our device to make the works: the size of the grids, the matrices, and so on.

Bastien: It was just about two years ago! How long did you stay at Villa Medici ?

Bastien: Almost two months. We went back in September to continue the work on the gardens of the Villa that we had started. We went back there to finish the shots. Now we are preparing a publication for next year.

So it was a turning point for you.

Edouard: Yes. It was a wonderful moment to be in Rome, in a totally quiet city, without any tourists. The Villa Medici was empty, we had the gardens to ourselves. It was very surprising.

What’s most beautiful about your work is the dialogue that exists in the works. How do you work together, and how did you proceed for ‘Obsession Dietrich’?

Edouard: There are two types of pieces. A first set was made some time ago. These are photomontages, notably the works called “disappearances” where we have removed Marlene from the image, and yet her magnetic presence still remains. We also show two small pieces that show “too much” Marlene by multiplying her. These are fairly traditional techniques of organizing images using Photoshop or InDesign. In a second phase, when we came back from the Villa Medici and we were physically separated, we developed a medium of communication that was only through images. We sent each other images, and each one was a response to the one that had been sent previously. Through a simple process of superimposition, it was as if the images sent kept track of those sent just before, piling up one on top of each other. We chose to use this process to work with Pierre Passebon’s collection. We could load all the images on our phones and then – a bit like a in card game – we just had to pull out the right image at the right time to tell stories. This allowed us to respond to the quantity of images, which was very important.

Bastien: So much so that we don’t even know how many photographs there are in total. We’ve digitized about four hundred.

Edouard: This would allow us, with a single work, to be able to summon up an enormous number of images. On certain sequences, we could sometimes invoke forty to fifty images.

Bastien: The images of “disappearance” are the result of a very thoughtful process that involves retouching once the initial idea is found. Whereas in the photographic dialogues, it goes very quickly and it’s very spontaneous. It’s also very liberating because we often ask ourselves a lot of questions when we create. Here, we go by instinct, and that often creates amazing things. And since there are two of us and we only talk to each other with the images, there is a will to make each other understand, and sometimes there are misunderstandings.

Edouard: With the more “classic” photomontages, we know exactly where we want to go. The image is already conceived in our head, we just have to realize it. Here, as we work together, it is not possible to anticipate what the work is going to look like. It is created in the present. We don’t know the end. You have to listen and pay attention to what message the other is sending. The creation of the image becomes a negotiation. If you can’t find a harmony, it doesn’t work.

Bastien: The image we send always requires a reaction. Bastien can try to force me to go towards something. I can follow him or resist. Unlike the images of swallows where there were two of us creating the collages, here it is the duality that comes out of the work. 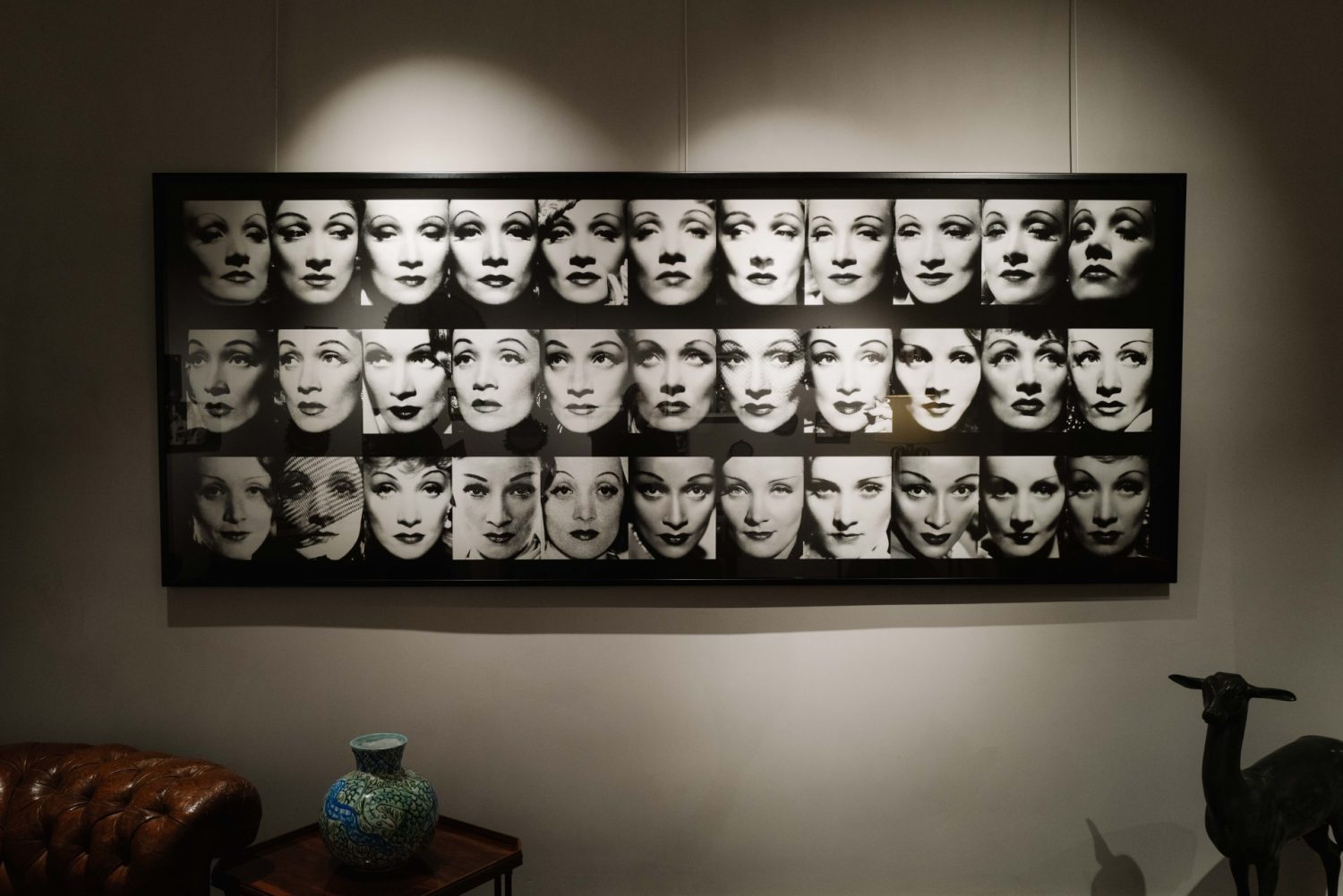 Edouard: Exactly. The image is not just an image sent, it is a call, a question to be answered. It’s a conversation. And just like in a conversation, we don’t always have time to think. One could not answer in alexandrines, for example, unless you’re is a real genius!

Bastien: You also have to know that the image you send is mostly seen by the other person. And when we put our two “parts” together, we rearrange them to sort them out. Then we evaluate what we like, what works.

Edouard: Sometimes the transformation can be done from one step to the next, a bit like a painting that you are in the process of creating and you wonder when you should stop.

Technically, how do you send the images?

Edouard: We use Instagram’s private messages.

Bastien: We take a picture via Instagram, we choose a friend in the list to send it to. The other person receives the image in a blue thumbnail, it’s an image that you can only read once and that disappears after it’s been opened. The only way to save it is to take a screenshot. And we answer with another picture.

Edouard: Thanks to this tool, we can manipulate the image we received and the one we just took. We add an image at each step. What’s interesting is that thanks to Instagram, we can respond directly with an image.

Bastien: A lot of the work in the exhibition was done this way. That’s why the images often have rounded corners, because the screenshot taken keeps the impression of the smartphone. Some works are reorganizations of several screenshots, several sequences. There are always different ways to manipulate the images. You can rotate them to give a diffraction effect, or create something more vertical by creating scratches.

Edouard: Another process that we like very much consists in completing a photo by another one. Complete half of Marlene’s face with her face in another photo. What was interesting in this exercise was that you had to know all the photos because the principle is to go quickly. There was a whole time of learning the images before we even started the dialogue. This way we obtain an impossible face with two parts of the face taken from two different ages. 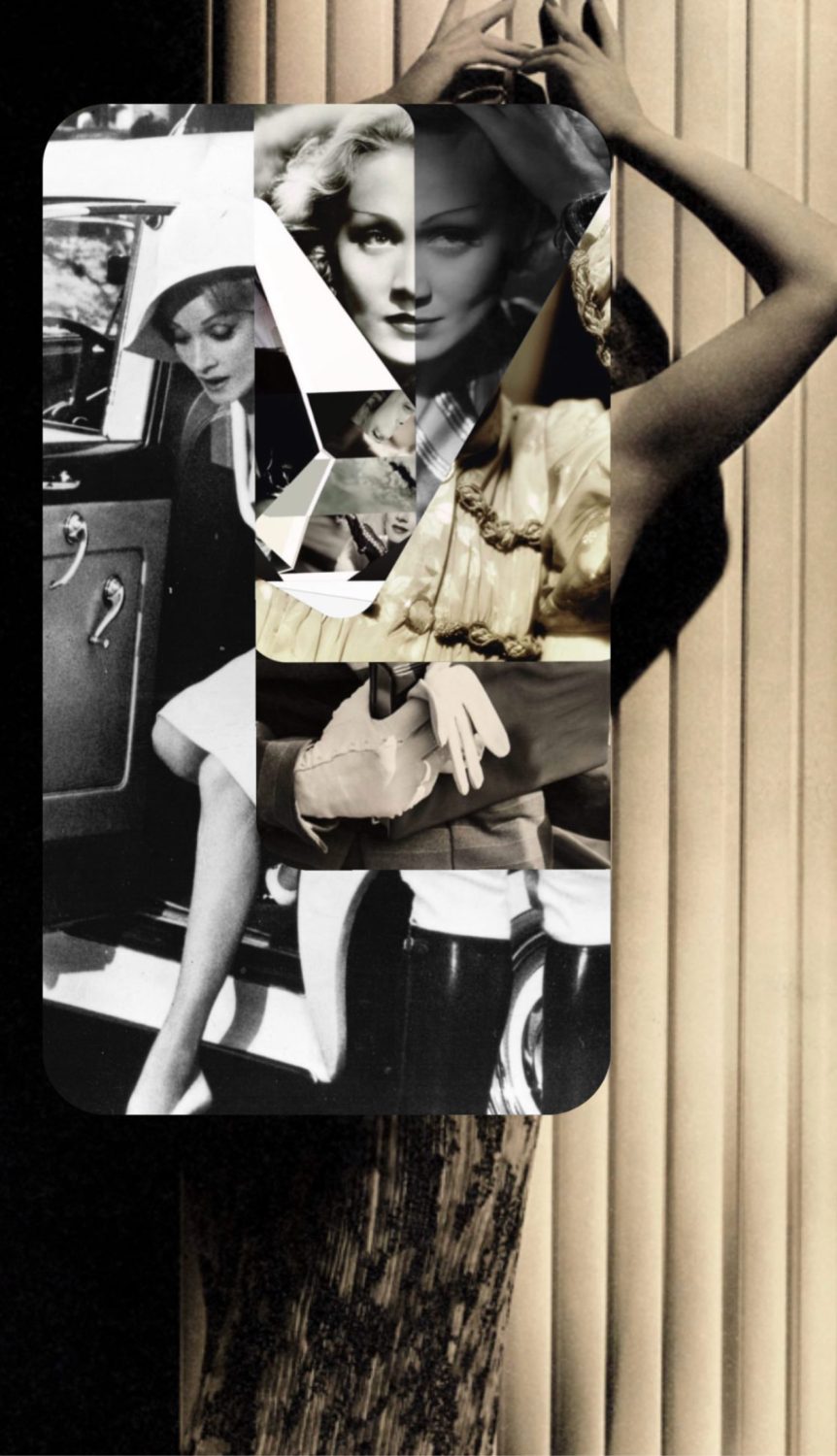 How did you come up with the idea of using Instagram as your work tool?

Bastien: When we returned to Paris after our lockdown in Rome, we started to talk to each other through this system of photo-dialogue. Then we realized that we had something.

Edouard: Nowadays we use photos a lot to communicate. Instead of saying that you are eating, you take a picture of your plate. Sometimes you don’t even have to put a word in, you can understand it right away with the image. What was very funny in these early tests was that we realized that we could be living the same moments, our breakfast for example. We played a lot on these similarities, identical but separate moments, to create images where the two situations meet. Then it became a real working tool.

The exhibition at the Galerie du Passage – Pierre Passebon is entitled “Obsession Dietrich”. Why this obsession?

Bastien: Initially, it was an obsession borrowed from Pierre Passebon who holds the largest collection of Marlene Dietrich’s photos – which had been exhibited at the Maison Européenne de la Photographie in 2018. He asked us if we would be interested in working with this collection. From there, the dialogue began and he shared his obsession with us. We knew very little about Marlene Dietrich other than this mental image that everyone may have. We got to know her through Pierre’s eyes, what he showed us about her. He is passionate about her looks, her face and the way she used images to exist. As visual artists, we are also interested in shapes, in lines, and this was a very good entry point to this project, to allow us to enter into Pierre’s mind.

Edouard: The first time we came to the Galerie du Passage, Pierre started showing us the images and we were surprised to see the evolution of photography through the life of Marlene, who was born at the beginning of the 20th century and died at the very end. In the end, we see the whole society transforming, especially since she worked with cinema, fashion and music-hall. We see the evolution from the 1920s to the 1980s through her looks. And she still managed to remain up to date! It was a real chance to work with the same person through the ages. That’s what inspired the big piece hanging at the back of the gallery: we had fun accumulating Marlene’s faces through the ages.

Bastien: And we ended up getting along with her!

The future of menswear