An exploration of identity

The more our characters occur from story to story, the more they become our own icons.

Born in 1991 and 1990 respectively, Johanna Benaïnous and Elsa Parra have been known as the duo Elsa and Johanna since 2014. They became known through the series of photographs “A couple of them”, and are now working on film and video as well. Discovered at Salon de Montrouge, they were recently awarded with the Prix Picto de la Mode, for which their work was presented at Palais Galliera, which included them in its collection. They are currently exhibited as part of “Les Apparences” exhibition at the Graineterie – Houilles (until November 3rd), before their solo show at Galerie La Forest Divonne – Paris, from November 7 to 24. They continue their auscultation of the world, with their strong ability to observe the everyday life and the total freedom to stage themselves.

As a result of all these role you take on mixing genders, social backgrounds, different life stages… Who are you really?

We are, of course, who we are, but so imbued with our characters that, as time goes by, we express a mixture of these fragments of personality and character. So much so that when we are photographed, in “real” life, it is no longer so obvious to find ourselves. We have got used to being interchangeable and are still a bit of someone else, but we have fun with these codes and now we have several of them…

How do you choose your characters? Is everything rigorously considered in advance, such as costumes, poses or scenarios?

Creating a character is quite instinctive, but it is triggered after a long observation phase. We make it up in stages, for example with a wig, then a piece of clothing inspired by the hairpiece, and then we about a pair of shoes. The character appears in a rather magical way. We are a duo, so the question immediately arises as to how we will match it with another and this is something that motivates us. We also draw inspiration from films, series or anything else we see, constituting a fictional image bank and inspirations. 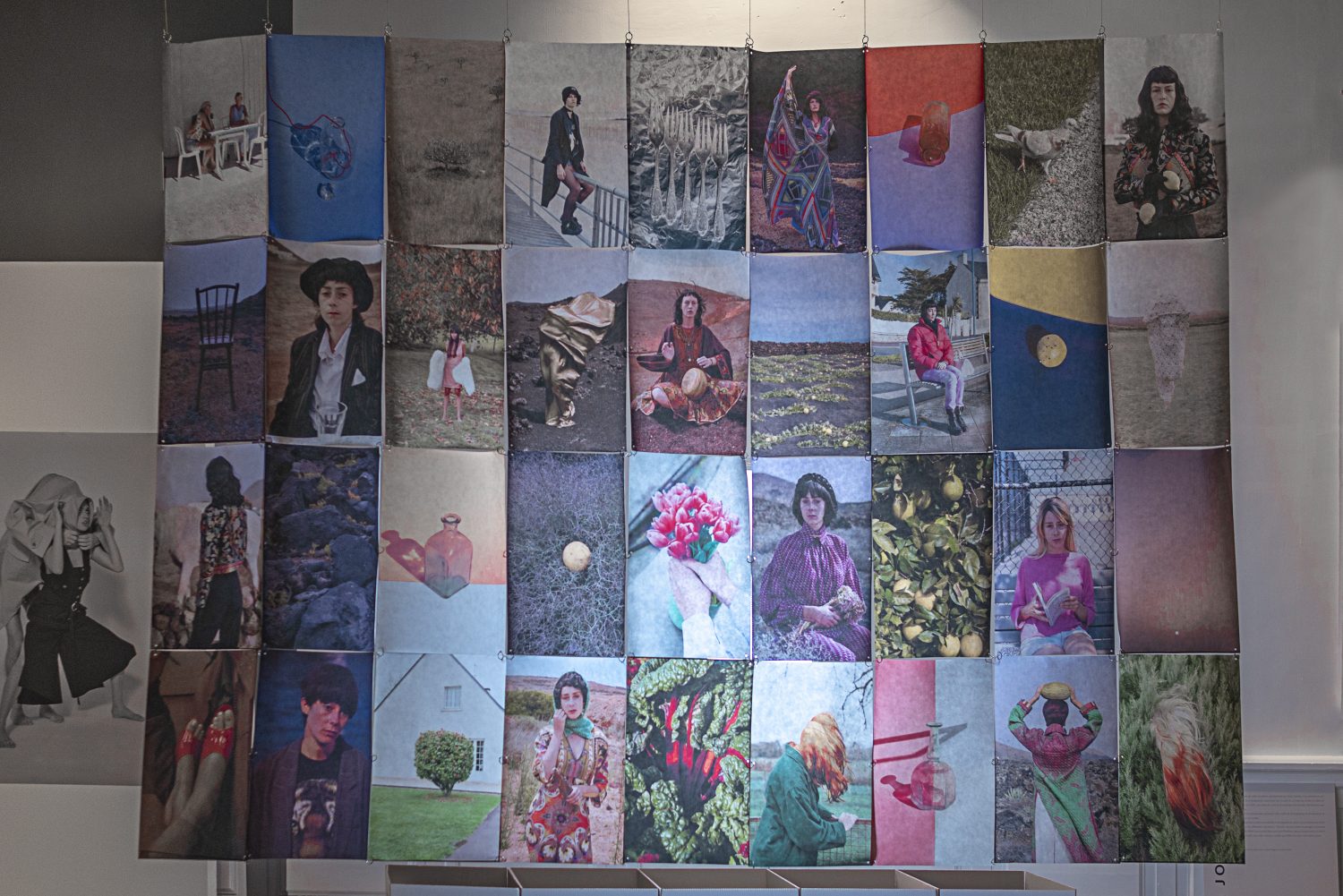 Do some characters return?

Yes, but never in the same form, and they actually follow our physical transformations over the years. But if I take the example of El Chico, from the series “Los oyos vendados”, a young boy inspired by 20th century painting, he more or less inspired us for our latest medium-length film, “Tres estrellas”, as if it had been shown in another story. He wears the same hairstyle, close to the first character, but wears a different costume. So he exists in two different periodicities, just like our work which has a lot to do with the notion of time.

What was your first image or character?

The first protagonists came from a simple desire to stage ourselves and to offer our experience to those who would see our photos. At first, we let ourselves go and build very different characters such as teenagers, old farmers or sinners… a myriad of categories that could be caricatured and, as we brought them to life, we came closer to a certain truth. The more our characters reoccur from story to story, the more they become our own icons.

Why did photography immediately become a must?

We each wanted to be protagonists as much as we wanted to be behind the camera, to get involved in creation at the same level. We never wanted to talk about ourselves, our goal was to witness the life of others, and of course we know and love Cindy Sherman, so our multiple (or mutual) self-portraits were a way to get involved in this tradition, while allowing us to go beyond a certain limit. Being a dup multiplies the possibilities of performance and brings even more complexity. That is why our first work developed over two years, and constituted a series. As we had just met, we had to create common memories, and we were together 80% of the time. This project has taken part in our lives in a completely immersive way. 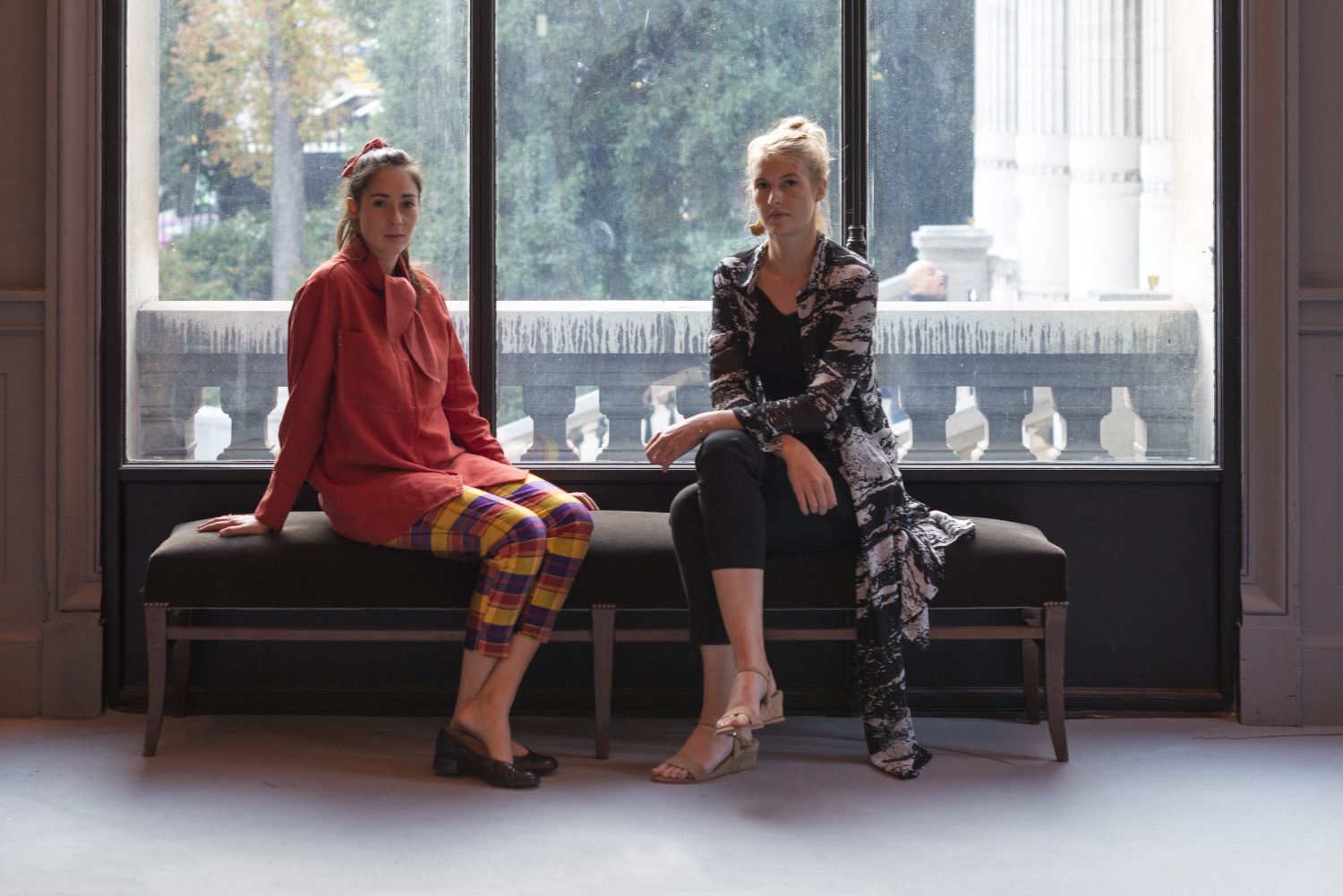 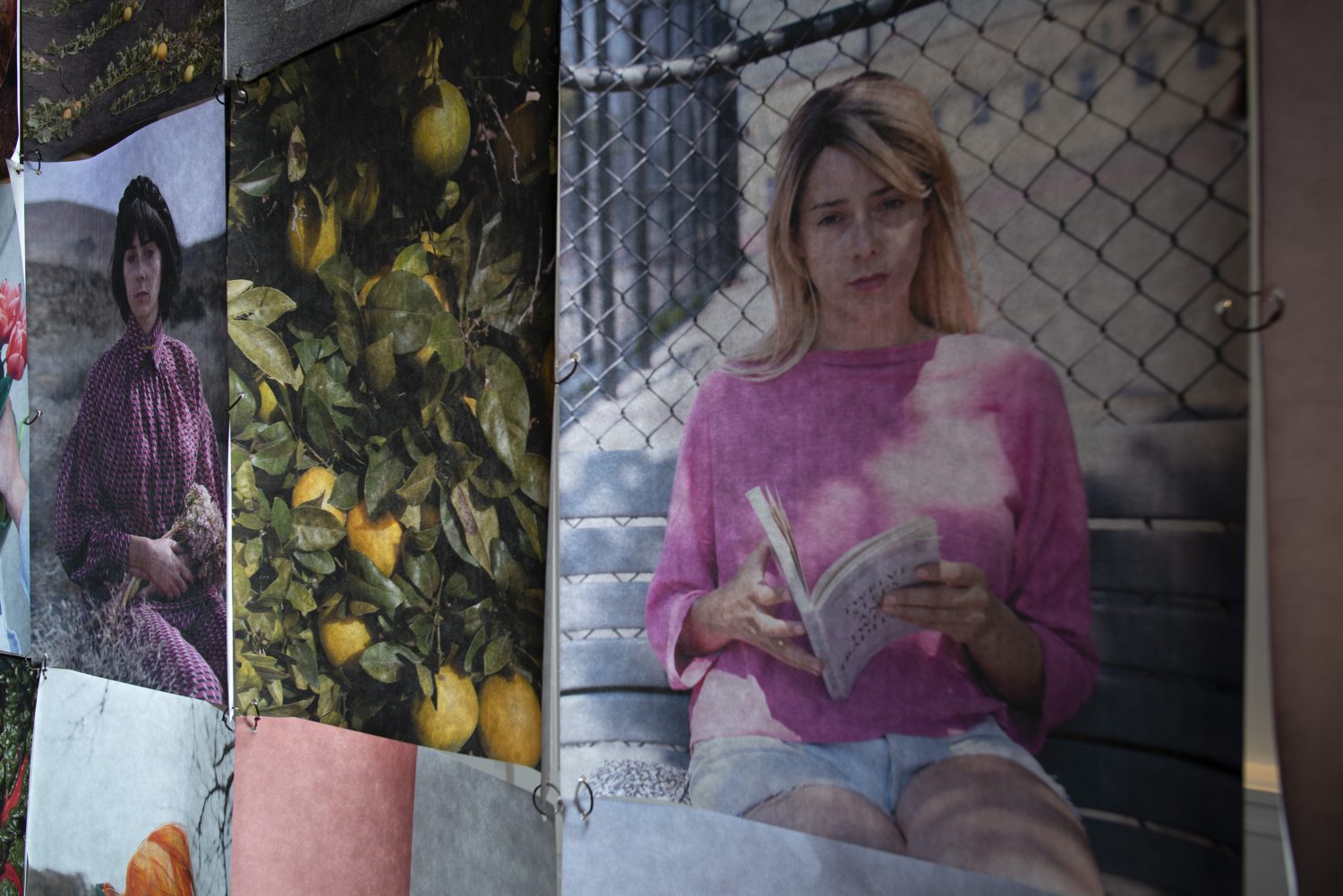 Is this “image autofiction” ?

Definitely. Even outside performance, we talk about our roles and stories. A playful form also lies in this language that we have created, and it is fun to cross-reference typologies of our characters in real life. Because we see on the street those who look like the young people we play! We wanted it and, even if we sometimes develop more dreamlike or phantasmagorical figures, we always seek this credibility.

You met at the School of Visual Arts in New York. Isn’t the tradition you’re developing also more Anglo-Saxon?

In fact, some people think that we are not French and that if we had met in Paris, we would never have worked so hard on these issues. We loved American photography, especially of Diane Arbus or Bruce Wrighton, but also the universe of Gregory Crewdson or Philip-Lorca diCorcia. We are fascinated by this kind of image where the human is worked in a precise setting and which holds pictorial tradition. This medium can also inspire us. For example, David Hockney’s last exhibition at Centre Pompidou had taken us back to other paths of photography. Our series “Los ojos vendados” comes directly from 20th century painted portraits of anonymous figures in grandiose landscapes. Unlike “A Couple fond Them”, which was more in line with street portraits, we were more sensitive to the fact that the pictorial character planted in an imaginary setting of the sublime sees his identity suspended and frozen, as if he/she kept kept a secret.

What does series and multiplicity bring to your work?

We have a way of approaching the medium that is very narrative. The story can also be told through landscapes or scenery, but in a natural way, we always think about the links between images and how to penetrate a psychology or the overall vision of a scene. We never thought of a photograph alone and, when we tried to do it, we immediately imagined a series of ten. Many images have never been shown. As we work in improvisation, also for performance, direction or film, we let ourselves open a very free frame, even when we are asked to make clips.

We think of these videos the way we do our photo series. An idea and an aesthetic inspire us, then colors come to us according to the music and lead to sensations and characters. Then we find a place, put on costumes and let ourselves explore. In addition to this very performative part, editing is also very important. A great porosity remains between photographs and videos, which inspire each other, but never say the same thing. In parallel, we worked with musician Breno Viricimo for your last video. 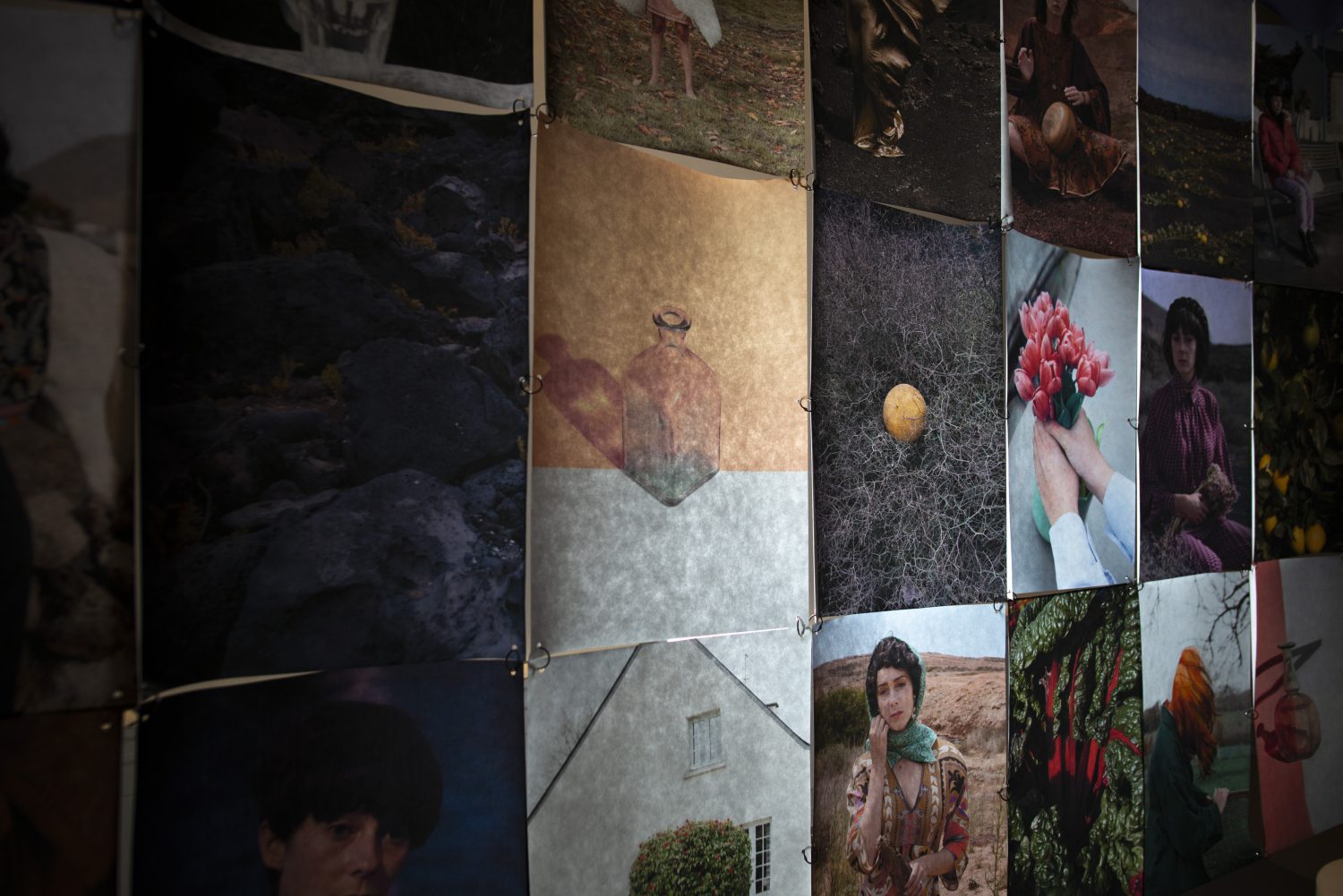 Does these groups or singers contacting you give you the impression that they are part of a generational work?

Our first collaboration with LenParrot was cyclical, over a two-year period, and allowed us to immerse ourselves in a stranger and more surreal world than our own images. Even if it was not the initial goal, our reflection is part of a generation since we play a set of young characters belonging to our daily lives. Moreover, we observed that the critics are quite radical, either you like our work in its totality, or not at all… But we refused to develop a monomaniac universe because we tend to be less classifiable.

In fact, your aesthetics mix a contemporary atmosphere with a 60-70 style that can also evoke Courrèges…

Completely. Our images are like us. Things currents are something we like but we’re not seduced by, and we do not want to design current images. Many, at the heart of “A Couple of them”, have told us: “You are part of the portraits trend, identities, something urban, American, suburban…” But we didn’t want to confine ourselves to a dogma, so we turned to something else. We remain in the movement and exploration of a role that will be photographed in multiple settings. When a character is played for twelve hours, he himself will develop several facets, justifying, if necessary, the seriousness of our work, which is part of the action.

Do you accept, however, a feminist reading of your images?

Yes, even if we never wanted to include ourselves in any political commitment, we naturally defend feminism as women or actors who have played men. This also categorized us and led to many questions about whether we were in a relationship and treated homosexuality or bisexuality. We talk about it, as we mention the whole world around us. It is also exciting to observe that a work lives in its context and is not perceived in the same way according to the time at which it is revealed.