“Rive Gauche has this intellectual touch of the Solovière man that fits our universe perfectly”. Alexia Aubert

Alexia Aubert welcomes us in her first Parisian boutique: a new destination for Jacques Solovière enthusiasts. Over the past eight years, the timeless men’s shoe brand has won the hearts of Christophe-Thomas Chassol, Aaron Levine and Alexis Michalik, as well as Alexia Gredy and Nicolas Ouchenir. All of whom wear the brand at all times. Half boutique, half studio, this multifunctional space was imagined by Brunoir, a design and scenography studio created by Jennifer Bongibault and Jeanne Boujenah, whom Alexia introduces to us in Paris.

Your new boutique is located on Rue du Cherche-Midi. Why Rive Gauche?

I grew up here, and from the beginning, our headquarters were in the 7th district. Rive Gauche has this intellectual touch of the Solovière man that fits our universe perfectly. And rue du Cherche-Midi is a beautiful historical address with its own atmosphere in each part of the street. For me, it’s authentic, and has a soul. It’s like a small village, out of time, that reflects the spirit of Jacques Solovière. We are a timeless brand, and our customers are sensitive to this idea: having time, taking it, is important. Also, Gérard Depardieu lives next door too, just across the street (laughs). We hope he will come and see us!

Jacques Solovière originally started as a men’s brand, but the musician Alexia Gredy, also wearing your shoes, appears on your moodboard.

It’s true, Alexia likes our style! Jacques Solovière is a masculine brand, but it’s designed for all genders. Yet, it’s not for the tomboy, but rather for women who like to dress casually, like men. To walk, work comfortably. No glamorous woman with dizzying high heels here. The Solovière woman is like Alexia, sure of herself. A woman who favors comfort and style over appearances.

Why did you choose the Brunoir studio?

In the past, Jennifer and Jeanne have worked on projects for John Lobb and Hermès, brands whose identities are similar to ours. I also like their approach, the girls are very nice, and we understood each other right away. 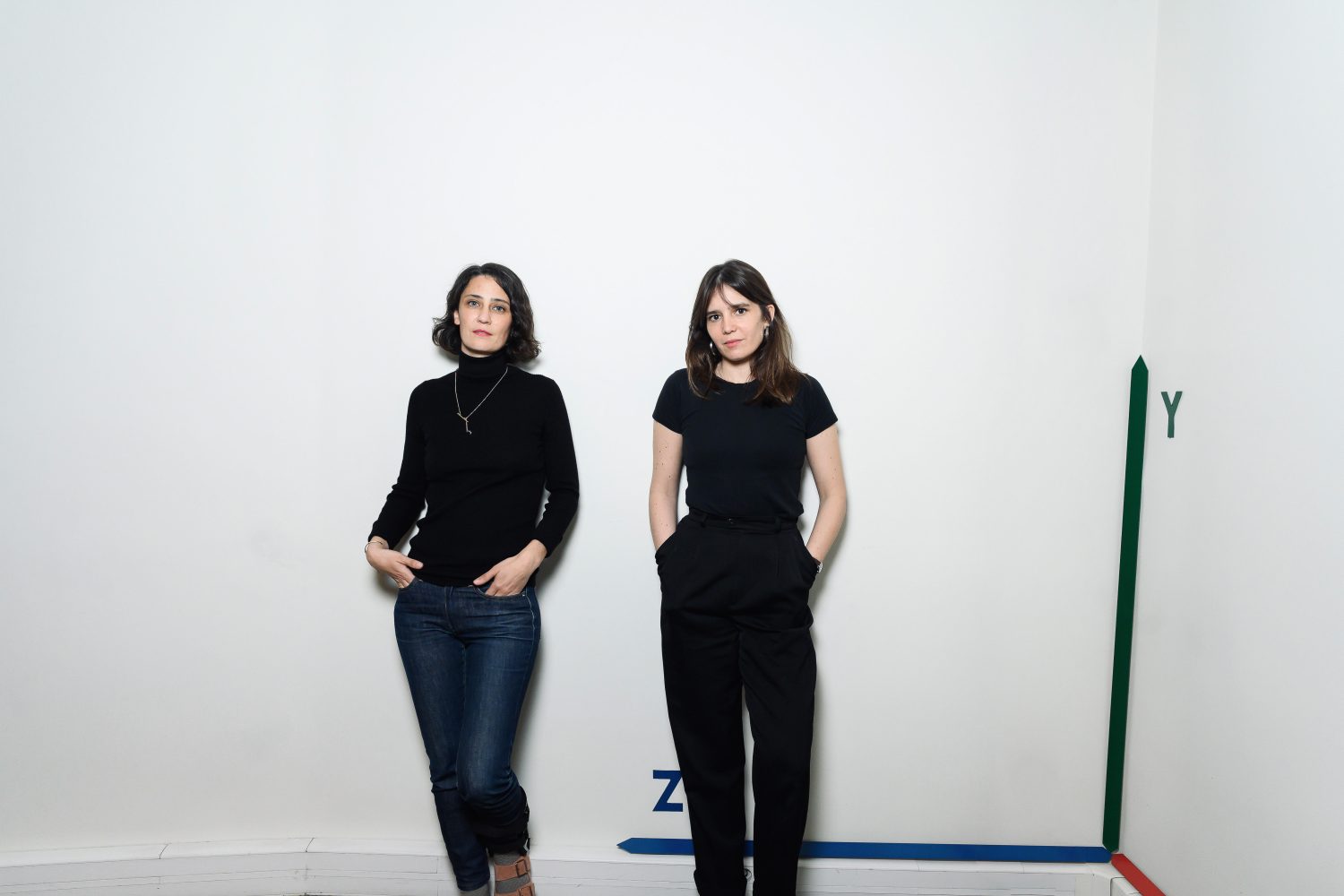 Jennifer and Jeanne, a question to you. First John Lobb, now Jacques Solovière, you are shoe specialists. How did you meet Alexia?

Jennifer: Alexia and I have known each other for many years, but we had lost touch a bit. And through mutual friends…

When did you start working together? How did you meet?

Jennifer: We met at the Arts Déco in Paris. Before, I had studied at ESMOD and at Arts Déco, I was in the “Printed Images” program, and Jeanne in “Scenography”. In the first year, we had a lot of classes in common, and we became friends. When we left school, one thing led to another and we found ourselves working on the same projects. Little by little, we got closer and we started to answer calls for proposals together. It was a good match, and we created our studio.

Jeanne: It’s true that we have quite different backgrounds. I studied literature before entering the Arts Déco, specializing in theater design. When we graduated, we wanted to keep going in a multi-disciplinary direction. It allowed us to work on a very wide range of projects and to respond to many different subjects. And that’s what we’ve always wanted to defend in the studio.

Who was your first client?

Jennifer: Our first project was the artist-musician Mina Tindle, who hired us to do the set design for her tour.

Jeanne: But the first project that fits into what we do today was for Legrand, switches! In 2014, they had a showroom in the 7th district, rue du Bac, where they exhibited their most “luxurious” switches. They wanted to fit into this design oriented area, and they gave us free rein. We had fun suggesting things by playing with the on and off. We discovered another aspect of design, a far cry from the creative projects we had worked on in school. Finally, no matter whatever the subject is, we always find a way to tell a story, to get out of the box, to bring a maximum of creativity, and our signature touch.

So, what is the Brunoir touch?

Jennifer: First of all, it’s a minimalist aesthetic, very refined.

Jeanne: We like it when it’s efficient and serves a story. Something else that interests us but is more difficult to express is surrealism, which we are quite fond of. We like to make jokes! As often as we can, we try to infuse some humor, a little twist, a little deviation.

Jennifer: In fact, the work we’ve done with John Lobb shows it quite well: all of our latest storefronts are pretty surreal.

What was the biggest challenge of this project?

Jennifer: For Jacques Solovière, Alexia wanted to do something very minimalist as well, very Japanese, with a focus on wood. Based on this idea, we worked on our design around a graphic game of repetition, which also facilitates the work of the carpenter, by repeating systems of cubes that stack up.

Jeanne: The principle is simple: with a single piece, you can do several things. This allows us to ask the question of how to tell a story in several chapters. It is very interesting.

What was your initial brief?

Jennifer: This time, we focused mainly on furniture design and interior design.

Alexia: It’s a boutique/office. More and more clients are requesting special orders, and we do custom pairs for them in a special room at the backside of the store. Our office area is very basic: just a large bookcase and two tables for my team. It’s great to have an office right next to the store: it allows us to intervene when clients ask questions, and to have all the feedback in real time. We learn to adapt, to be super responsive on the collections, and on customer’s desires. With digital, we were missing this real-life aspect, we were too isolated.

What inspired you for this project?

Alexia: I wanted a lot of wood, not necessarily old-fashioned, gentleman’s waxed wood, but rather Japanese wood. I wanted something fresh, very bright.

Jennifer: We worked with Alexia’s cabinetmaker and chose several different types of wood, to vary the look, to play on the nuances, because the shapes are repetitive. It creates a patchwork of wood, which remains very nuanced, in a rather reduced palette. But this allows us to create contrasts and light with three different wood species: fresne, larch and birch. And everything is handmade in Lyon.

Alexia: The idea was not to use luxurious wood. It’s common wood, but everything is designed in a very simple and contemporary way.

Jennifer: We created seating for the customers outside, several areas inside, as well, so that Alexia could share the different ranges of her collections within the space. We also created a counter that doubles as a cash register. It was the subject of many discussions, because this store is also a place of work, where people need to be able to work comfortably. So we created a hybrid checkout/counter, shelving, and split the space.

How much time did you have to complete the project?

Jennifer: One day! (laughs) Just kidding, but it was done very, very quickly. We had a tight deadline, but we’re used to working in a rush. We had a month, not even. In ten days, we presented a proposal, after some feedback we went straight to the development with the carpenter, then to the project follow-up.

Are you used to working with such short deadlines?

Jennifer: We often have little time. That’s how projects get done. If there’s too much time, projects never get done.

Jeanne: On average, projects take from one to three months, depending on the workload of course.

How do you create a timeless space? When do you know it’s the time to redo everything?

Jeanne: Habits change, so I’m not sure the concept of absolute timelessness makes sense. In an industry like fashion there are seasons, things are always changing, new stuff is being invented, the innovations are constant – and the project is supposed to reflect this dynamic. So how do you create a place that is one and multiple at the same time? To speak of my own practice of theatrical space, this was at one point a true issue. How do you make this place accommodate the maximum amount of creation possible and allow each artist to express themselves individually ? If we transpose the idea to a boutique space dedicated to fashion, these are very interesting questions. The space we created for Jacques Solovière, a timeless brand, is one of the possible answers.