For its first exhibition on Donald Judd, Galerie Thaddaeus Ropac has invited Judd’s son, Flavin Judd, to curate the show in its Marais space. The gallery began representing the artist’s foundation in Europe last November and Flavin Judd is the artistic director of the Judd Foundation.

On display is a diversity of sculptures from 1963-1993 that exemplify Judd’s non-representational approach to art and interest in industrial materials, such as plywood, aluminium and acrylic sheets, as well as woodcuts and works on paper. What reoccurs throughout is the American artist’s fascination with form, space and colour, his emphasis on the intrinsic quality of materials, and his investigation into volume and geometry.

On the ground floor, an early floor sculpture made from wood in red-cadmium paint with a central, aluminum purple tube is juxtaposed with a horizontal, wall-based ‘progression’ sculpture from 1970 in clear and purple anodised aluminium, its elements and the spaces between them progressively increasing in size. Other pieces are revealing of how Judd played with arrangements, perceptions and reflections, as seen in the ‘partition’ wall pieces with dividers and a rectangular aluminum floor piece from 1989 with an intersected blue sheet on the bottom, its blueness giving the illusion the depth, like a swimming pool.

Say Who spoke to Flavin Judd about how his father investigated colour, space and materials, how he refuted being called a minimalist artist and how he and his sister are preserving Judd’s numerous spaces, from the five-storey, cast-iron building at 101 Spring Street in New York to the 20 buildings in Marfa, as Judd requested in his will.

Your father grew up in the farmlands of Missouri. How did his upbringing guide his approach to sculpture?

Around his grandparents’ little farmhouse, there was sky and ground but nothing else. He was really connected to, and loved, the landscape. One of the reasons we ended up in Texas was to escape everything in New York and find the landscape. He specifically didn’t want to make forms of nature because that would have been copying nature. He wanted to invent something new that was not in nature and not man-made. What is that shape? But the problem is you get quickly lost in shapes and mathematics. He wanted to start with something simple, and build in the complexity from that, so you could easily understand the work.

How did his background as a painter influence his sculptural work?

It was the fact that he started off as a painter and his dissatisfaction with the results that allowed him to do his painted sculptural work. But it was also seen as a bit odd that he was painting his sculpture. Mark di Suvero and other sculptors were not doing that at all. One of the only exceptions was John Chamberlain. But Don felt it was normal to paint the works because he was a painter. From the beginning, his interest in colour was consistent in everything he did. 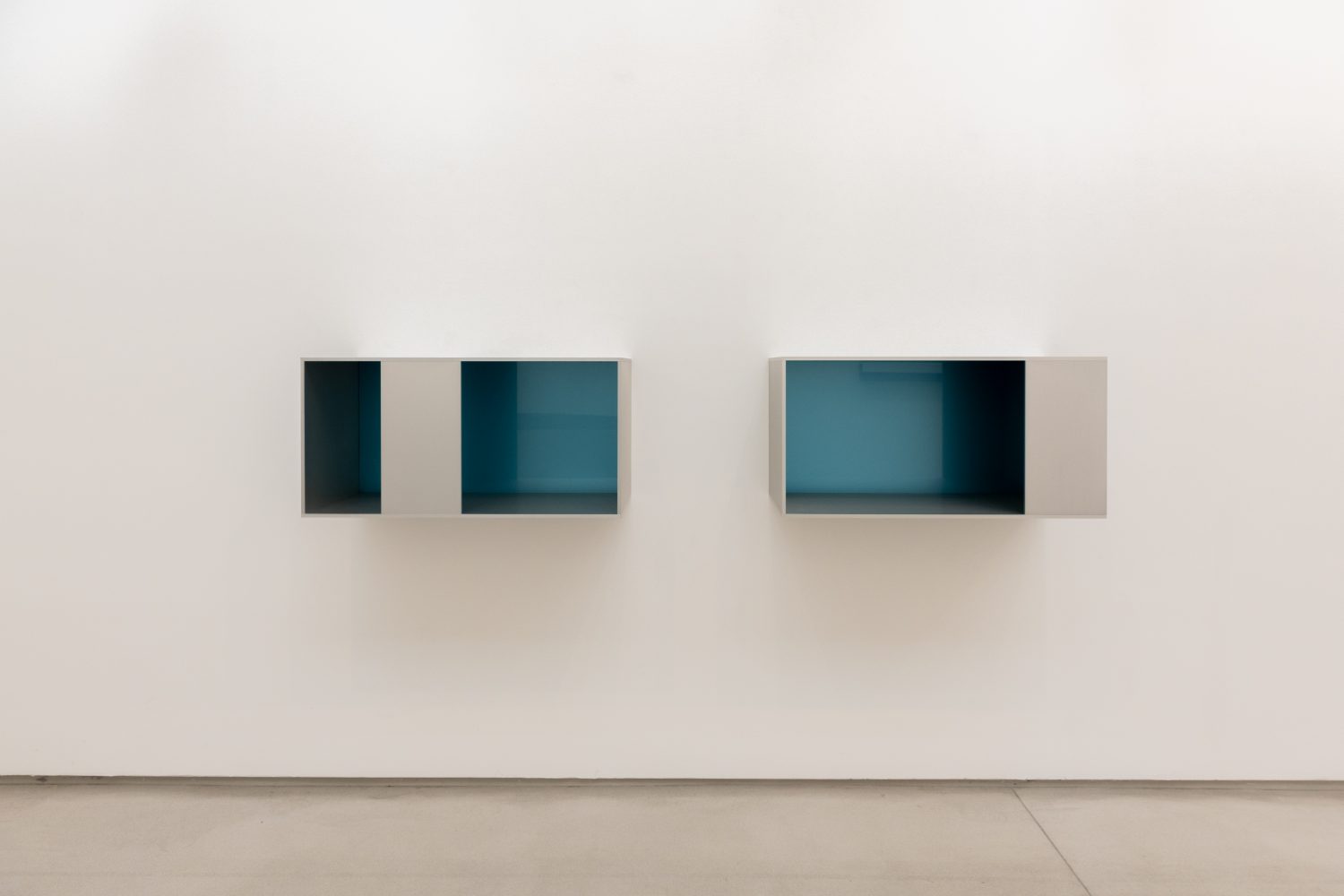 How would you describe the role of colour in his work and how did he choose which colours to use?

For Don, using colour was about drawing attention to the most amazing thing of reality itself. He thought that to investigate colour, you have to start from scratch. When he started making the painted aluminium pieces in 1984 he avoided typical combinations because they’re almost a cliché. He tried to keep away from primary colours because they were too easy. He wanted a way of working with colours that was not already accepted. So there were a lot of tans, dark purples and colours that are classed as secondary. The painted aluminum works from the early 1980s were a deliberate attempt to use colour more – you could get two or three colours at once [in one artwork].

How did your father’s investigation into space in his work evolve?

If you look at the early work from 1963-64, they are one object and you walk around them. If you look at the work from a bit later, 1967-70, there are multiple, decentred units with no central core around which you revolve. The difference from one piece to the next is Don thinking: ‘What can I do, given certain conditions, to make the piece more interesting?’ For instance, some of the pieces in this exhibition have panels intersecting the interior that can move or pivot. It’s Don trying to figure out a simple way to make it evident that there is order or rationality and making the piece as present and visceral as possible. He would play with ideas. For instance, his first multiple units were the same thing repeated. Then he started opening the fronts and playing with the dividers at different angles. It’s like Bach making his music go forwards and backwards in the same piece. Don has two sides to him: he’s basically a scientist trying to investigate the world and he’s an artist absolutely in love with space and colour.

One of the pieces in the exhibition is a horizontal, wall-based ‘progression’ sculpture in clear and purple-painted aluminium from 1970. What was Don exploring here?

The progressions were a way of using simple maths and visually evident ideas to make something more complex but not complicated. He figured out that you could have solid boxes that recede or reduce in length by a certain system, half again and then half again, that creates a space corresponding in reverse to to the volume. He used this idea of a small order in different kinds of pieces like the dividing, bisecting panels within open-front facing boxes that change direction. There’s a seriality there that can be applied to more than one thing. 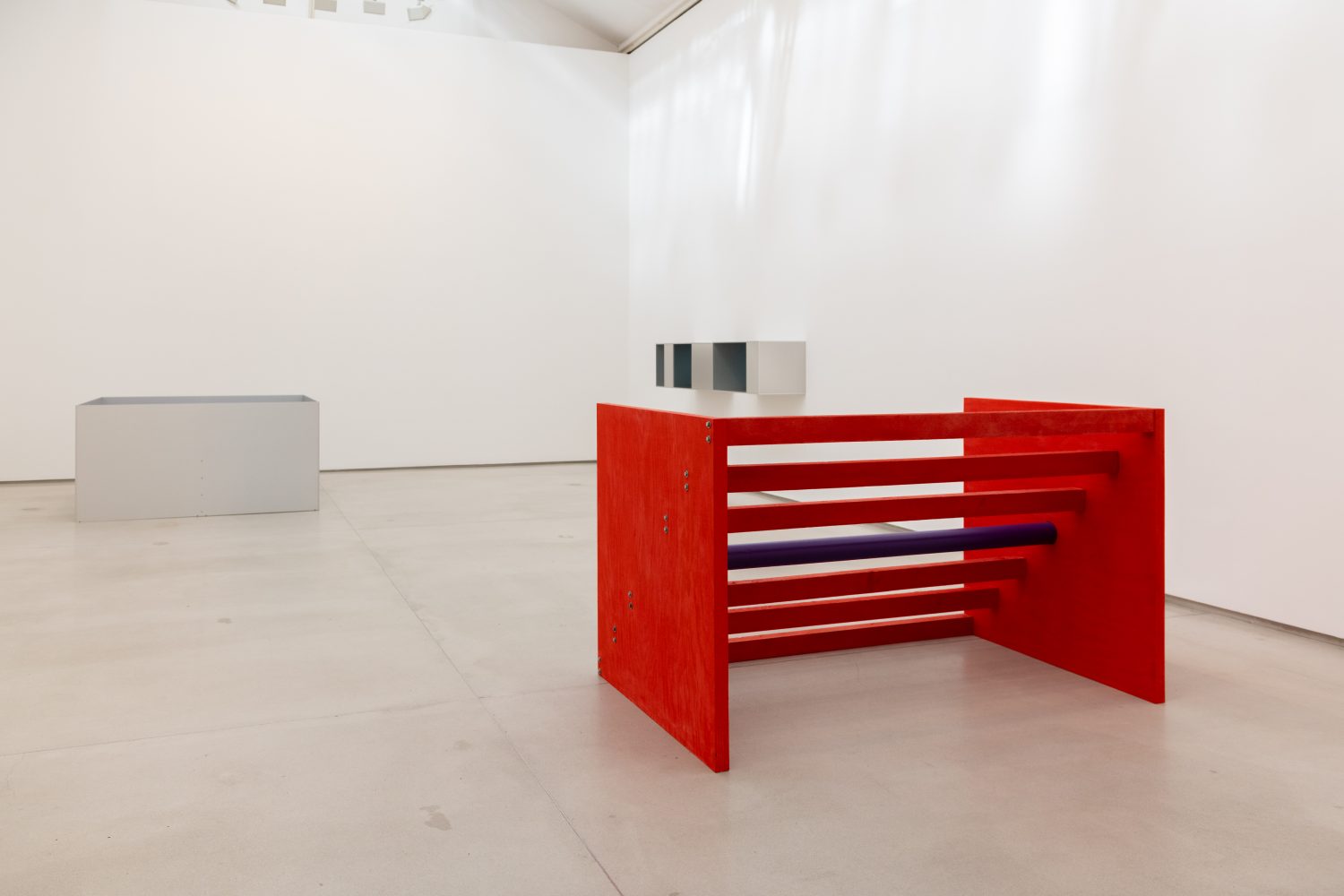 How did your father select which materials to work with?

At the beginning, metal was an important discovery because it had the advantage of not having to be painted; its colour was intrinsic to the surface. But after a while, he was limited in the colours that he could get with the metals. He used copper, brass, galvanised iron but not bronze, which is an alloy and that, because of its immense historical record, wasn’t neutral enough. With bronze, you’re immediately thinking about Greek sculptures. That [association] is the exact reverse of what he was trying to do. The key thing about Don’s work is that it’s against art history, against myth, against narrative. What he was attracted to was the physicality of materials and how galvanised iron or plywood looks.

Many people have referred to your father as a minimalist artist, a label that he refuted. What is your opinion on that?

Minimalism was a designation given by art critics that didn’t like or understand the work. Minimalism was an attempt to group together certain people who did not necessarily like each other or their work or, in most cases, were not contemporaries. It was a kind of tidying up of history and aesthetics and ideas at the expense of the artists and their work. There was no manifesto. Don was close to Claes Oldenburg, Yayoi Kusama and John Chamberlain and they’re hardly in this group. So it’s a false grouping that relies on a false narrative, which is exactly what Don was against.

Would your father talk much to you about what he was making?

He would never talk about what he was making. It would just appear, the piece would just show up. He would either be really happy or not so happy but he wouldn’t necessarily tell anybody. The pieces that were really good would lead to other pieces and he would see something in them that would propel him onto the next thing. And the pieces that didn’t work so well, he would either take a different direction or would learn from them another way. 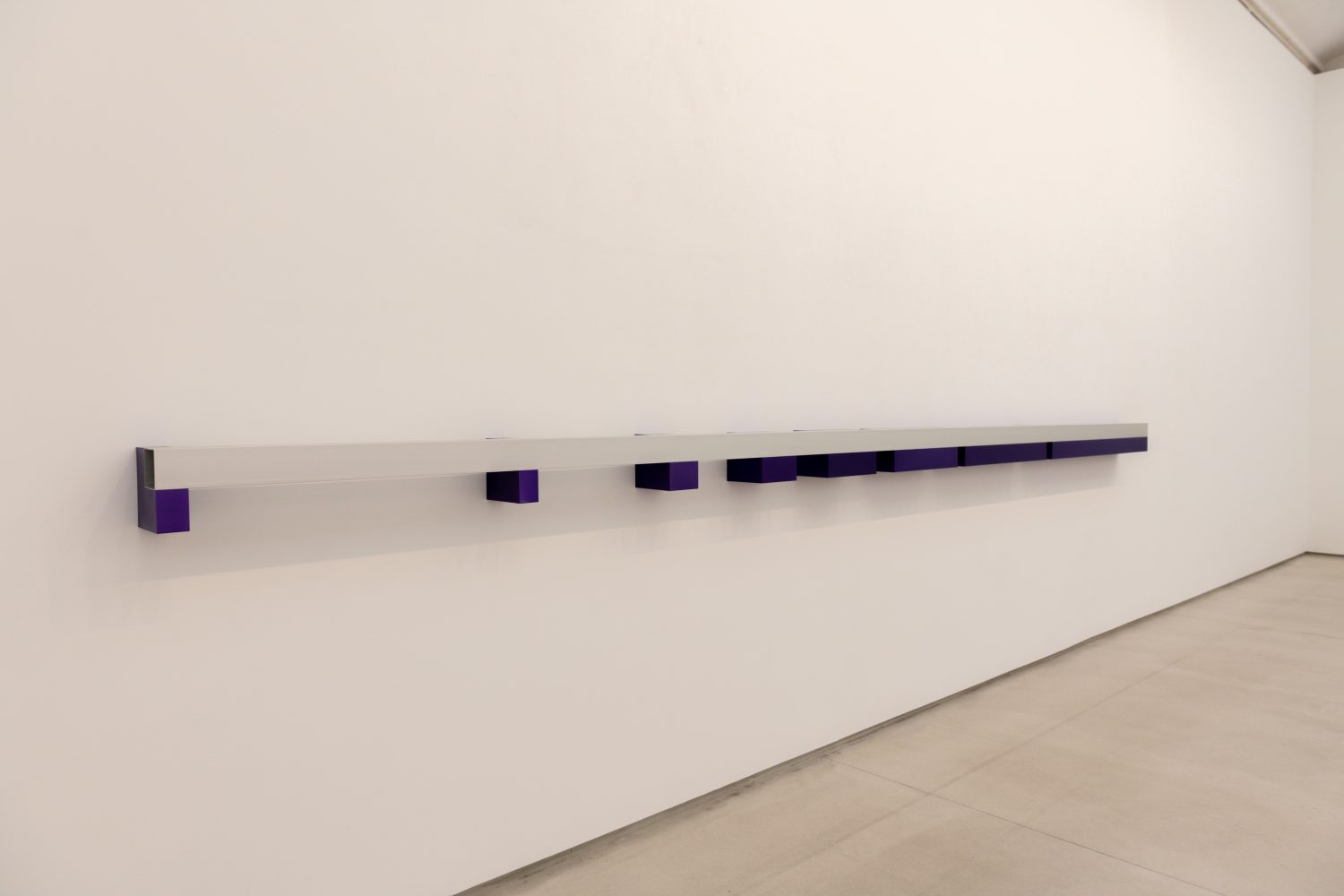 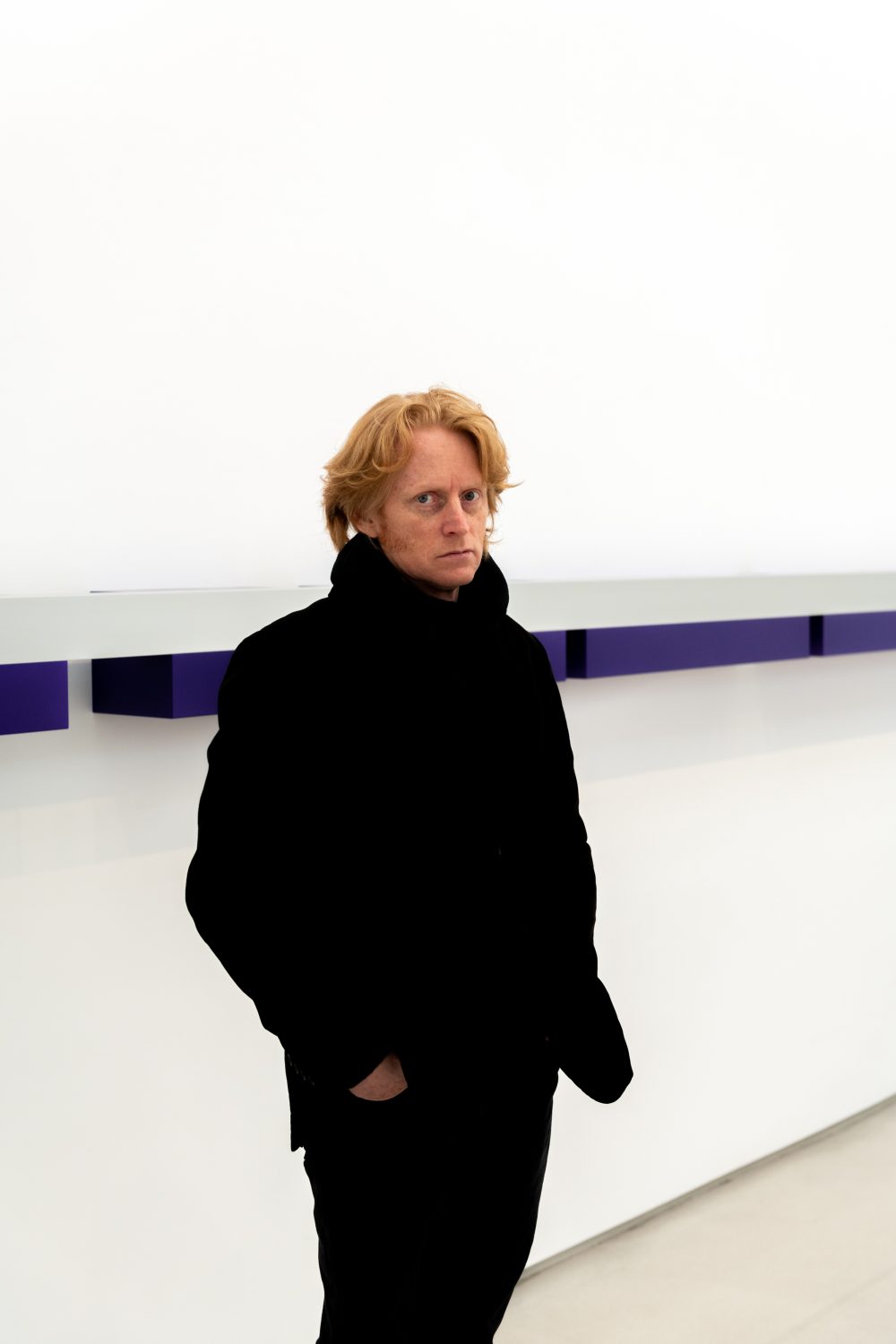 You’ve said previously that, through preserving 101 Spring Street, it became a museum by accident.

You’re renovating 6 of the buildings in Marfa. It must be a huge undertaking.

It is but that’s what we signed up to do. When Don died, we said, ‘OK, we have to try [to respect Don’s wishes and preserve the spaces]. If we fail later, at least we’ll have tried.’ We thought it’d take five years and then we’d know one way or the other [if the sites could be preserved, according to Don’s wishes]. But, actually, 25 years later we’re still trying. It’s working but we’re still trying.

Donald Judd, curated by Flavin Judd, is at Galerie Thaddaeus Ropac in the Marais, Paris, until 15 June 2019.