Everything is simple in my work, but I seek what is mysterious, even magical, and that surrounds us

Born in 1969 in Kobe, Shimabuku is back living in Japan after studying in the United States and having spent many years in Berlin. Since the early 1990s, he has developed a corpus of photographs, videos, sculptures and installations in which he introduces his daily life and confronts it with the world. In a very subtle way, not without humour and a certain sense of the absurd, Shimabuku interrogates the place of man in society and points out its disturbances. At Crédac (which celebrates its 30th anniversary in September), the exhibition “For Octopus, monkeys and people“ allows to discover historical pieces, never exhibited in France, along with a new installation.

The visitor is welcomed by a new installation, Erect (Ivry), that you wanted to exhibit with the video Erect, designed in Oshika. In what context did you make them?

In 2017, I was invited to the Reborn-Art festival, on the Oshika peninsula, which city of Ishinomaki was completely destroyed by the 2011 tsunami. The authorities have built a five-meter wall to prevent such disasters from happening again, so the absurdity is that the inhabitants of the seaside no longer have the opportunity to admire the water! When I arrived, I could not see the sea until I found a beautiful beach, where branches and stones remained, as well as memories of the houses that were there before, and I wanted to erect some mounds. This taught me a lot, because erecting is a very human action, which also refers to the beginnings of sculpture. I wanted to create the link between these collapsed homes and two buildings that were being demolished the first time I visited the city of Ivry, by presenting an installation of its bricks.

Your work has always been built in connection with the exhibition environment. What is your creative process? Do you do a lot of research or do you prefer the way your body feels?

I need to see, visit and apprehend places outside any source of information. I try not to read guides to avoid being influenced. I come back several times, but I only do what is possible in a specific place, with local elements. It’s a bit like a chef with the ingredients that the country or region produces, it is a challenge that I like to take up in my art. When I arrived in Ivry, I found that it was a city of character, especially with these bricks, while Paris is made of stones and has a completely different architecture. 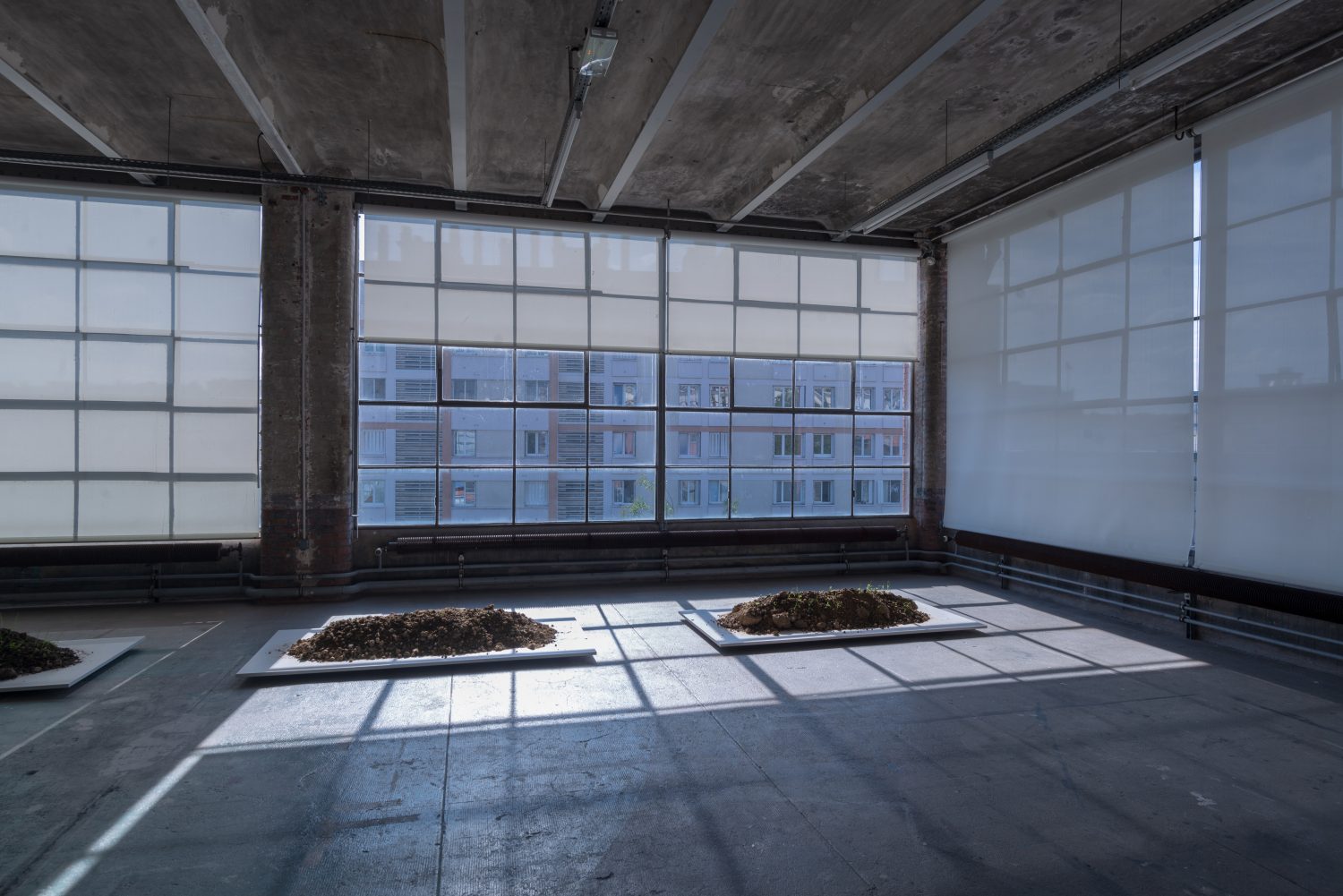 Since the beginning, you have worked outdoors, as shown by “Exhibition for the Monkeys”, in 1992, which you consider your first exhibition. You explained that at the time, artists had to pay to be in galleries. Were you claiming economic hardship, added to a critique of this system?

In Japan in the 1990s, artists had to have extra jobs to finance their exhibitions and I thought that was stupid. So I thought about how to escape it, while producing work that is more accessible, because making art has always meant showing it to the public, to me. However, the way to win a larger audience is not inside a white cube, where one addresses insiders, but to conceive art outside. The first space I found was populated by monkeys, who were my first spectators and to whom I dedicated the exhibition. It’s not just irony, because I’m pretty serious, maybe too serious… but I was really curious about their reception of my work. It seems important to me to communicate and share with human beings, but also with monkeys or octopuses…

Without knowing it, you were part of a “pre”-Relational art movement, even though Nicolas Bourriaud published his eponymous work, which studied this obsession for the interactive, in 1998. Did you recognize yourself there?

I know Nicolas Bourriaud well and at the time, I made my pieces in a very natural way, without knowing that other artists were thinking similarly. In Japan in the 1980s and 1990s there was a feeling of heaviness, darkness and lack of freedom. I felt quite isolated and I watched artists like Marcel Duchamp or the Surrealists, especially the poets Max Jacob, Guillaume Apollinaire and Jean Cocteau. Their work was translated into Japanese, so I had the chance to read it, while I was interested in Francis Picabia, Max Ernst or Man Ray. These conceptual approaches fascinated me, but I realized that I could not develop them in Japanese art schools because learning there was still very classical. So I tried to get into a school in the United States and I went to San Francisco.

In your work “Exposition dans un réfrigérateur”, presented at Crédac, you write that your first work was conceived in San Francisco and that it was related to your roommate’s request not to buy octopuses…

I don’t know why, but he had asked me not to keep fish, nor octopuses in the fridge. I waited a month, then one day I decided to buy some anyway ! I grew up in Kobe, on Osaka Bay, where this animal is an integral part of the culture, a bit like wine in Bordeaux. The octopus is an important part of my identity, but I denied it when I arrived in the United States, until I refocused. 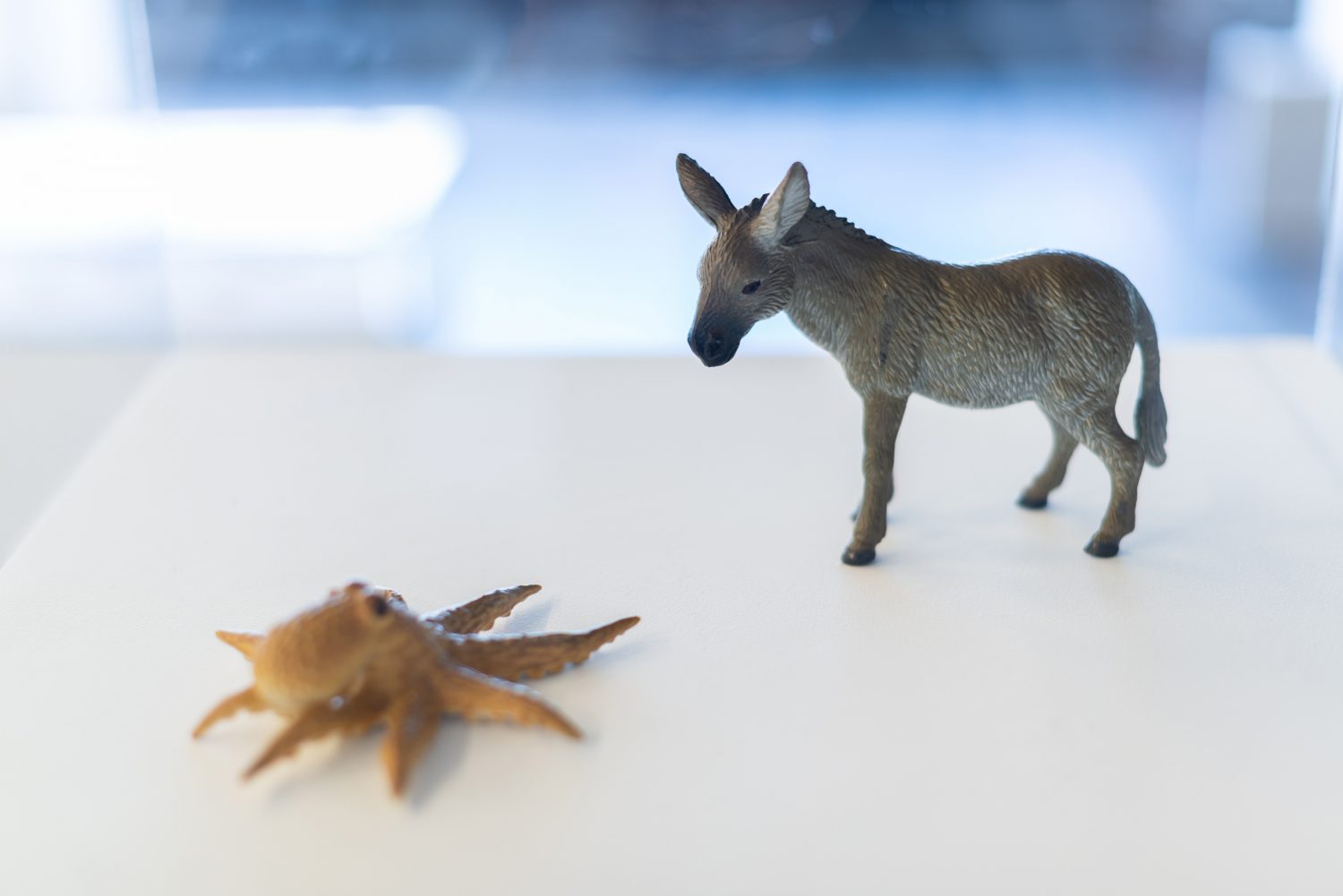 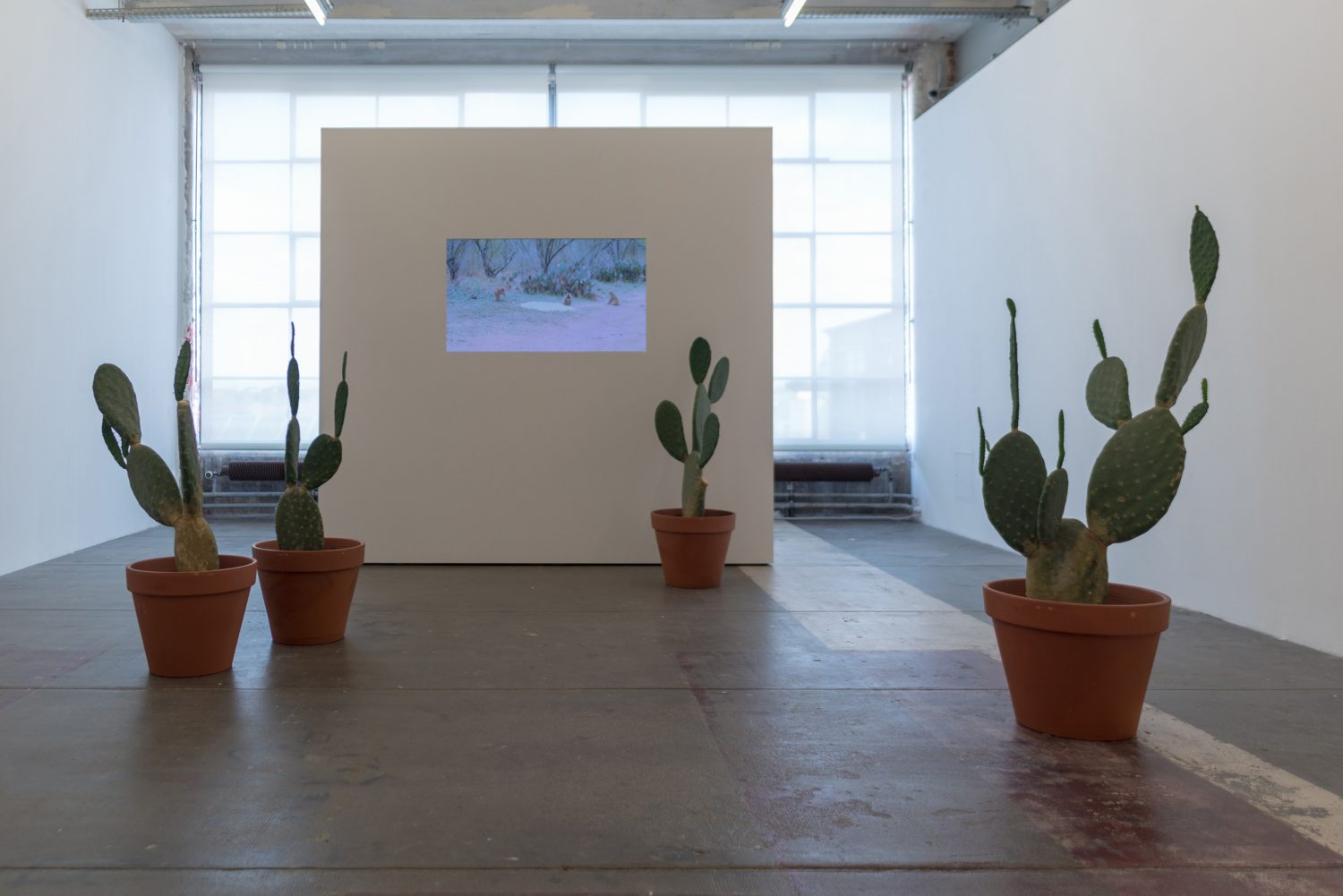 In Japan, octopus can also be the symbol of sexual power, as seen in a famous engraving by Katsushika Hokusai, which is called “Le rêve de la femme de pêcheur”.

Of course, but in Kobe, octopuses are just considered a delicious dish… If you are a tourist and you go to a museum, you can think of this symbolism, I understand it. But for me it’s much simpler and more direct. Like when I made these pieces with the monkeys, they were there, so I included them in my work…

Are you insinuating that there is less of this relationship to the text than the video “Ask the Repentistas”, speaking of reappropriation of language and presented at the 27th Biennale of Sao Paulo?

Each artist had to show an old and a new piece for the exhibition. I had thought about my video “Catching Octopus with self-made ceramics” and thought about adding subtitles, but once in Brazil, I realized that a high percentage of the population could neither read nor write. I then looked for another way to convey the message and discovered these street musicians who could relay the story, like oral subtitles. I showed them the video in which I tried to fish octopuses with ceramic jars, then they asked me questions. They wanted to know where I was born, in what kind of places I had lived… and then they started creating the rhythm and singing about my work. I was amazed! Many of us can read and write, but we lose our memory, while they do the opposite. They have almost a greater ability to dream or create stories.

Your work also reveals another conception of time, perhaps inspired by the Shintoist philosophy..

Growing up in Japan, that’s part of me. I would say, it is more about animism. Especially since my father comes from the south of the country, from Okinawa, which is a place where this philosophy is very present and where I had the chance to go often. It is true that, for me, a stone, a tree or the red brick of Ivry have a certain vital force. They are like beautiful portraits and I think that every object has a mind and a memory to which I am attentive. When I am invited to do an exhibition, I try to create a space in which visitors can create their own story. An open place that offers the possibility to feel free to think. If I can realize that, I feel like I’ve succeeded. It reminds me of an anecdote about Joseph Beuys, who, during an exhibition in Japan, went around with the curator, and asked him to lower the temperature by two degrees. Because working on an exhibition is also a question of air. Just like when you visit a temple, the air is different.

Still, you use very simple elements, such as lemons, tomatoes or plants… Is resorting to everyday objects important to you?

I am not an artist who needs good tools. I think that gestures give a lot of power, even simply to erect a sculpture with wood or a stone. Everything is simple in my work, but I seek what is mysterious, even magical, and which surrounds us. You just have to look at it and reveal it. I’m intuitive in design, then I let chance in and often I don’t know what I will end up with… Sometimes miracles happen, like the day I actually managed to catch an octopus with a jar!

You’ve been subtly talking about the climate for many years. Do you think your work is apprehended differently now that we found ourselves in an ecological emergency ?

My work evokes the environment, but everyone has a rather precise role assigned to them in life. For example, after the Tsunami, everyone helped and showed solidarity, bringing water, blankets… It is very good to carry out these first actions, but we must not forget that at the end of the day, we have a fairly basic task. An artist makes art, a musician makes music, a butcher makes meat… I make visual art. This has a certain abstraction, even if the artists I love don’t make abstract art strictly speaking. If we talk about France, I feel very close to Philippe Parreno, Pierre Huyghe or Pierre Joseph. The first time I came here (twenty years ago thanks to a residency program) I felt a great affinity with them, much more than with Japanese artists of my generation. Like Rirkrit Tiravanija, who prepared food for the public, like me in 1992-1993. We didn’t know each other at the time but we were creating something similar… by chance. I don’t know how my work is perceived, but I keep doing it because that’s what I know how to do.