I am kind of a loner, but I believe in those moments when people unite on an idea and a project

Born in 1976, Gaël Charbau directed the latest edition of “Nuit Blanche”, but has been involved in the Parisian scene for many years. He founded and directed from 2003 to 2010 the journal “Particules”, and is in charge of severals Prizes in support of young french plastic artists, such as Bourse Révélations Emerige or the Audi Talents Awards. This multi-tasker is also curating exhibitions for Atelier Hermès or Collège des Bernardins. He has been both editor and co-director of Salon de Montrouge and now pictures himself at the head of Palais de Tokyo. A position that would allow him to combine his experiences and reintroduce the somehow cliché notion of “commitment”…

You recently directed Paris’ “Nuit Blanche”. How did you combine the requirements of being a curator with a program aimed at the general public?

When I was nominated, the first thing I thought is that it was an opportunity to show the different fields in which I worked these last few years. I wanted to explore how Nuit Blanche could have an autobiographical value and not only have one theme. For the past 20 years in Paris, I’ve discovered places, institutions, emerging artists and personalities… This edition of “Nuit Blanche” was the occasion to unite my fields of research, such as the relationship with science, or the links to music, performance and choreography. I knew it’d have something chaotic, but in a good way, and my job was to define limits so the event would be in adequation with precise places and would allow me to tell varied stories throughout Paris.

That’s true. I also wanted to enhance production, because when you work with young artists, it is rare to benefit from the infrastructure of an important gallery. This risk-taking was true to my approach and allowed me to control the spirit of this edition of Nuit Blanche. For instance, the sculpture of Hugo Schiavi, on Place de l’Hôtel de Ville, sent a strong message about the triumph of the Republic, and Maroussia Rebecq’s fashion show of putting the focus on question like recycling, ecology or the migration crisis. I didn’t want Nuit Blanche to be disconnected from our political reality. Even when I created the “Particules” in 2003, I had tried to fight against an approach that would be only calling things to question. I wanted to go to the heart of topics, to carry out points of view. 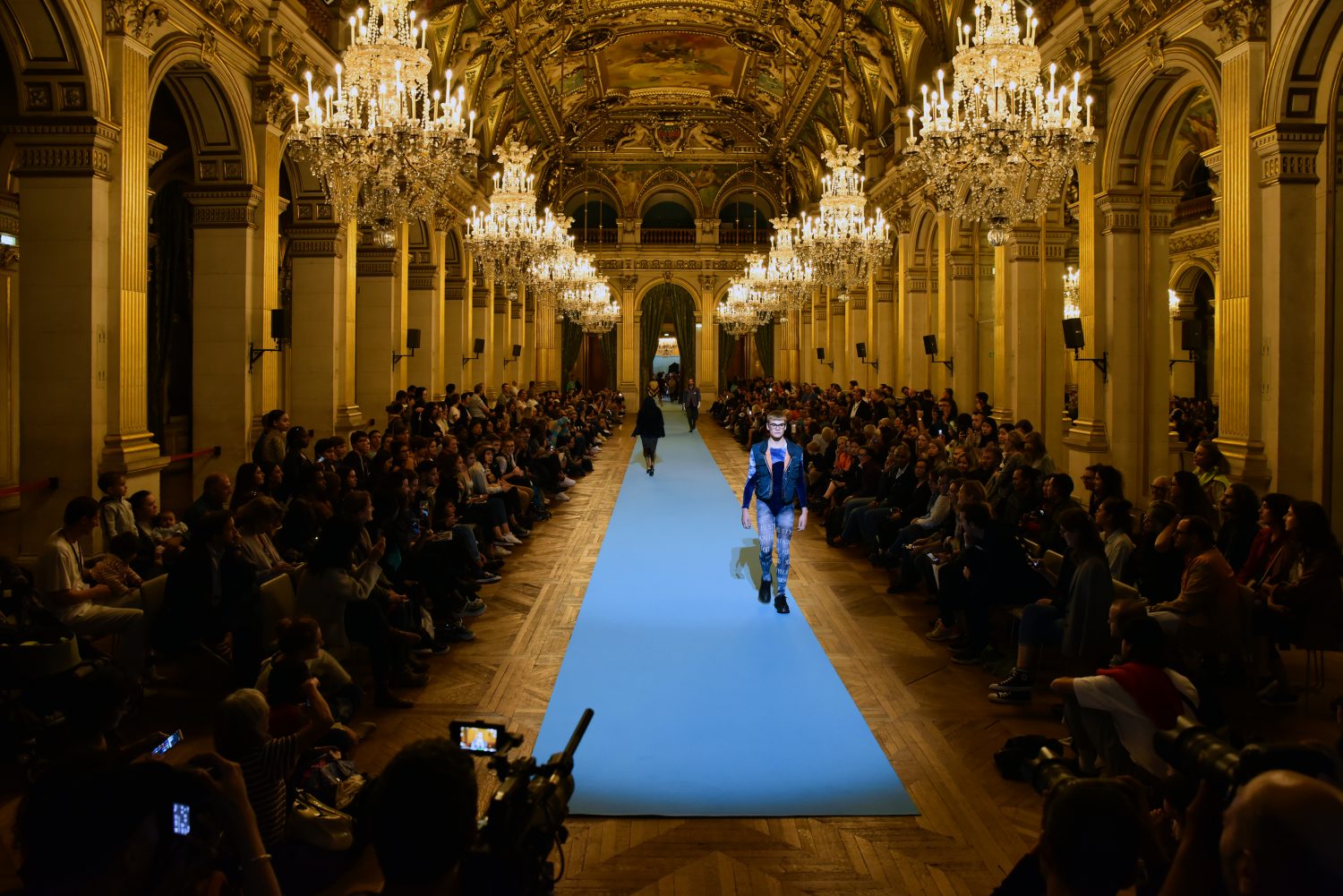 Did the City of Paris give you carte blanche?

They did. It can be scary at first because it is easier to rely on clear instructions and just check boxes. I am very proud of having taken up that challenge of mixing popular with high-end contemporary art, which always seems impossible. However, the program at Invalides showed smart and committed projects that were still being festive and easy-going. I always tried to work towards that direction.

Foundations often erect their buildings to put focus on the actual space rather than affirming their presence in the public space. Hermès did the opposite by having no rooted structure. They created partnerships with Centre Pompidou, Palais de Tokyo, or with other public institutions that needed external resources. In my opinion, this represents everything you can expect from the connection between the public and the private sectors. When I work with them, I am intransigent on my demands and the messages I want to convey, namely to trust this young generation of artists and to have the courage to support them. The Hermès Foundation exhibitions are not trying to highlight a logo, but a state of mind… As for Emerige, Laurent Dumas entrusted me five years ago with the Bourse Révélations, which I developed and in which I present artists without it always being in harmony with his choices. I have total freedom on this project and, through it, many artists claim rather uncommercial practices. Look at Vivien Roubaud, our first laureate, Louis-Cyprien Rials, Lucie Picandet or Edgar Sarin… They should have been supported by the institution first. This is the real issue here. While my projects often bear the name of a sponsor, their content attends to implement what the institutions should be doing by supporting the emerging talents.

Is this also what you tried to do when you collaborated with Stéphane Corréard at Salon de Montrouge in 2009?

The goal was the same at “Particules”: at the time, we aimed to welcome young critics. I remained true to these ambitions, without, I believe, carrying the flag of sponsors. For that matter, I succeed at convincing brands like Audi – more inclined to have production that were spectacular or communication-oriented – to support Eric Minh Cuong Castaing (who works with disabled children), or to present an installation by Emmanuel Lagarrigue, which is complex and bound to dramatic arts. They are looking for meaning, so my role is to be the junction between people who want to come towards contemporary art and what I’d personally imagine fitting in the institutions. This type of brand wouldn’t have spontaneously invested Marseille’s Friche La Belle de Mai either, still it is typically the kind of venue that needs financing… 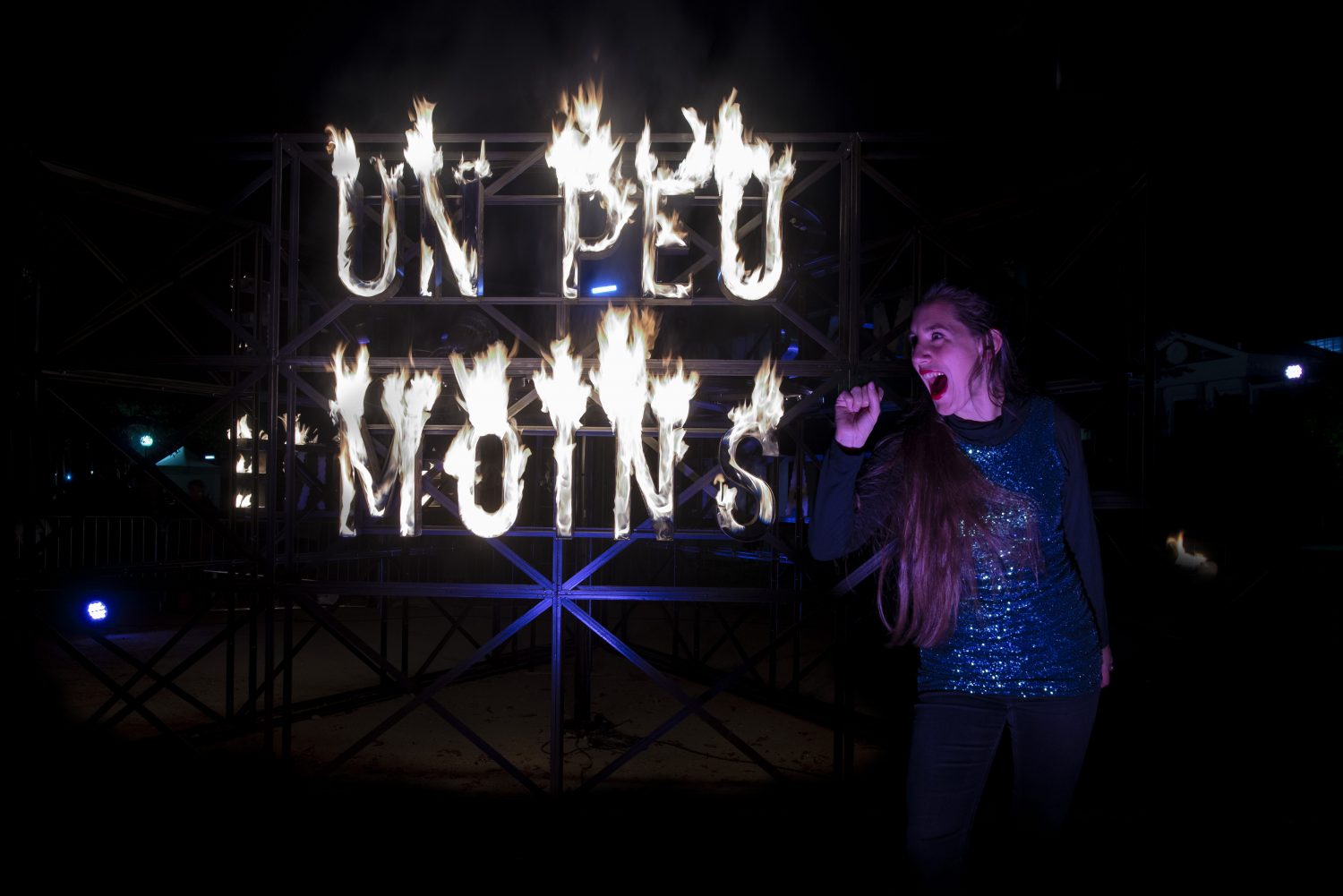 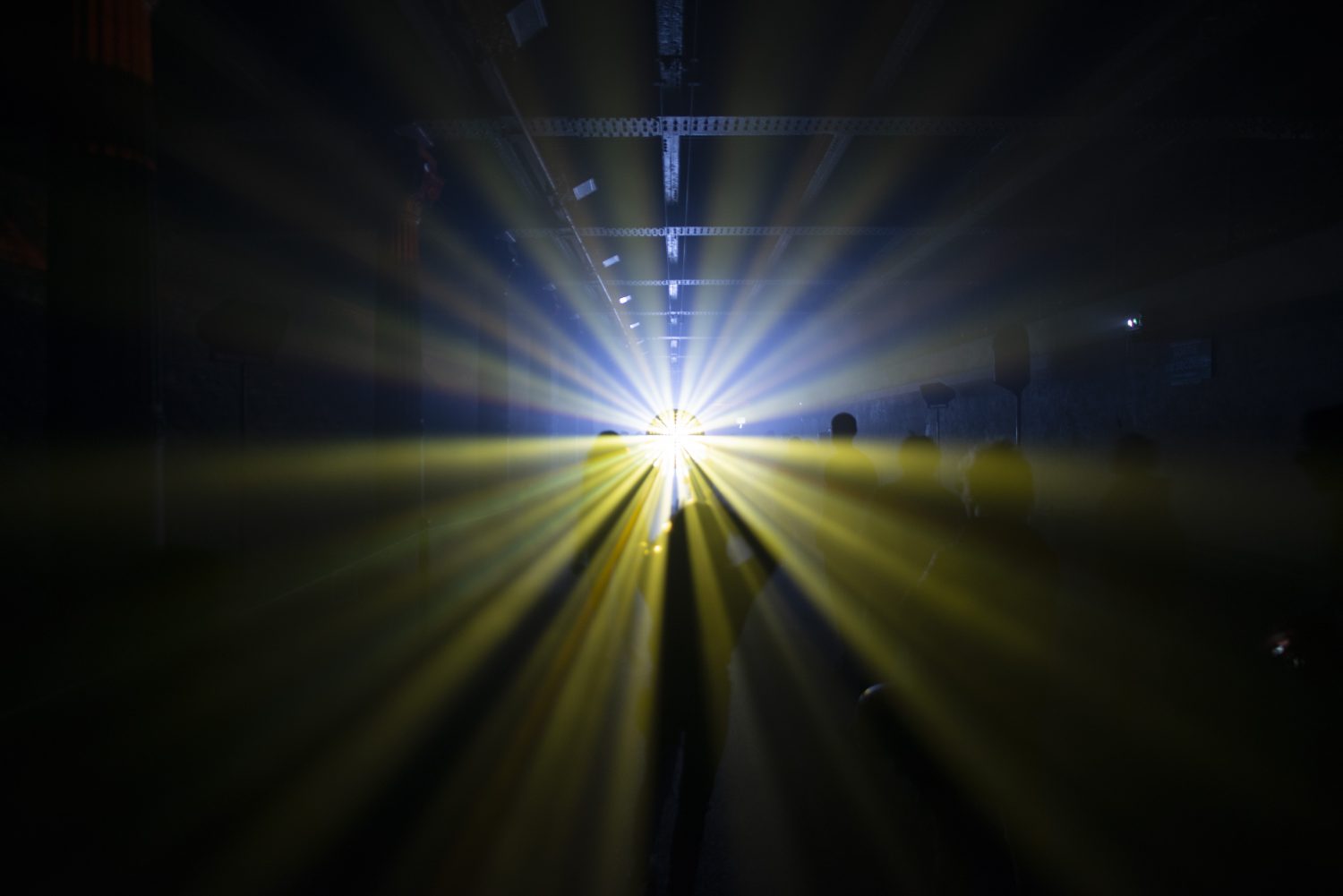 Today, Emerige is one of the biggest real estate developers in Paris. They now include in situ works by contemporary artists in their newest venues. Did that inspire the City of Paris?

The program “1 building, 1 work” was initiated in 2015 at the instigation of Fleur Pellerin, then Minister of Culture. The idea, which was very simple, was to analyse how all developers, and not only Emerige, can finance works that will somehow allow artists to communicate with people and to create a project for a specific site that would be connected to its history. This is not specifically related to the City of Paris I believe, and although there is a true will of refreshing the urban landscape, it is difficult to implement. But I’m not involved in this particular project at Emerige, I’m only in charge of Bourse Révélations, which is my only bastion or, so to speak, my “baby”.

Do you consider your role towards the artists to be rather of a long-term support, or to help them break through before someone else does it for them?

We can take the example of Edgar Sarin, that nobody knew before Emerige : I invited him at Collège des Bernardins and I entrusted him with the Île Saint-Louis for Nuit Blanche. So yes, the goal is to show their work to the public so everybody can appreciate it, myself included because I pursue projects with them. I also like the example of the performance “Slow” by Célia Gondol at Emerige, which consisted in making people dance with banana leaves. It was all about softness, and it proves that one can also offer moments of grace and poetry, and not alway issues related to politics of post-gender theory. After that, her work was exhibited at Palais de Tokyo and I was thrilled.

Are you also trying to show these artists abroad? It is always the pitfall of the French scene.

Of course, and when I conceived the first Nuit Blanche in Riga, I showed many French artists in association with Adiaf (Association for the International Diffusion of French Art). Many came from the young generation: Neïl Beloufa, Tarif Kiswanson… In Seoul, I organized “The French Haunted House” to show how Surrealism and Dada (representative a certain “French way of thinking”) was still irrigating today’s works, with Théo Mercier or Julie Béna… The residencies program at Hermès Foundation also allows me to present this new generation in Tokyo. Still, I am not limited to “juvenile” plastic artists. The Gilles Barbier exhibition, which I conceived for Marseille’s Friche la Belle de Mai, was then presented at the National Museum of Modern and Contemporary Art of Seoul. Being interested in new artists does not mean abandoning the ones that are mid-career or older…

They all deserve to be supported. Still focusing on young artists is also a way to be a part of our current world.

Sure, and this is the case when you grab political and ecological issues. In the art industry, ecology is a very important topic which should be dealt with more, especially in France. We throw an enormous amount of waste after each exhibition. When I did “Condensation” at Palais de Tokyo, I had imagined a scenography made with oaktree floors, which were then recycled. As people who throw away tons and tons of picture rails on a regular basis, we have a real responsibility, and this is also true for the fashion industry. These are industries that are resource-consuming, so this is an issue we must address. 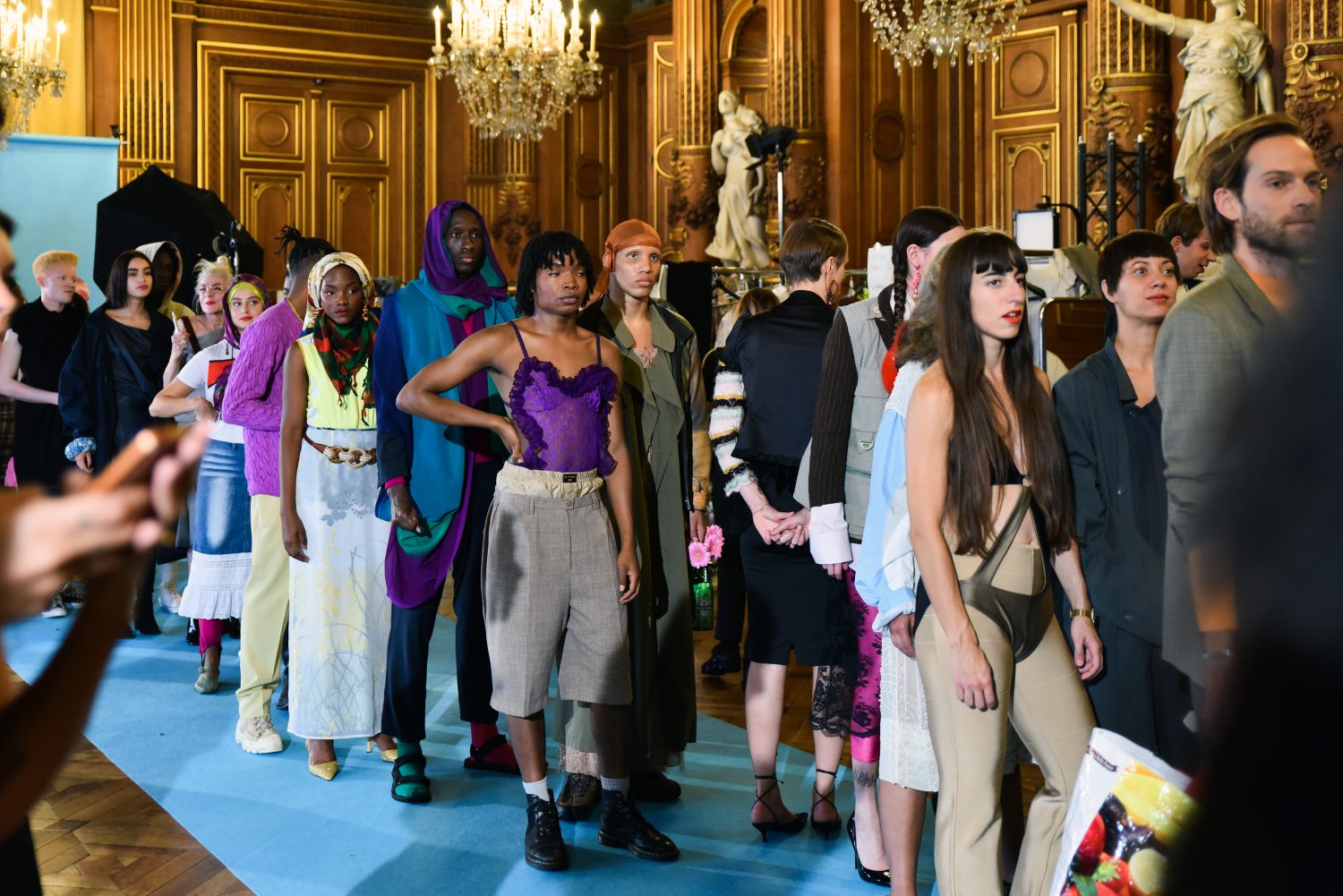 Is there a “Gaël Charbau style”?

If there is, I do hope it took a more distinguishable shape during this edition of Nuit Blanche. My problem now is to try to put together everything I set up. I don’t deny anything I did since “Particules”, and the energy it created, because I support a collective approach. I am kind of a loner, but I believe in those moments where people unite on an idea and a project. Everybody has a role to play, and I do think I am good a uniting people. My goal today is to create a whole with everything that I’ve built.

It is no secret that you aspire to become Palais de Tokyo’s director. What impulse would you like to give the institution?

Our generation cannot pretend to be affected by ecological or political issues without taking action. Warning signals are everywhere, and Palais de Tokyo must find ways to bear witness to them. Be bold even if it means not being in tune with a certain elite and the art market anymore. Even if it means not answering to the demand of trading rooms and art fairs. We have duties, and artistic education is a key topic. We can’t afford to remain in our contemporary art bubble without raising the question of how we address younger generations. Like students I had 20 years ago when I was an art teacher in the suburbs of Paris. We had to call upon Gustave Eiffel, Pablo Picasso or contemporary art through the filter of very simple examples. My problem is not appeal to the art industry elite, but to figure out how to maintain an intellectual standard, a sense of poetry, and a vision of the world that would be accessible to those that are less likely to have access to culture. I believe Palais de Tokyo is the place to do so.