There Were Two Young Men

We recreate a world from a subject. When you close your eyes, you conceive reality in a new way.

Gilbert & George have been working together since the late 1960s. The iconic artist duo just debuted a new exhibition featuring a series of drawings at Fondation Louis Vuitton. Born in 1943 and 1942 respectively, they met while studying sculpture at the Saint Martin’s School of Art; thereafter, they received the Turner Prize in 1986 and represented the United Kingdom at the 2005 Venice Biennale. Internationally recognized—notably for the images of their multiplied selves—they recently exhibited a solo show in France at Galerie Thaddaeus Ropac’s Pantin location.

At the Fondation Louis Vuitton, you present a complete set of There Were Two Young Men (April 1971), a six-part “Sculpture-au-fusain-sur-papier” that belongs to the Foundation’s Collection. It is part of a series of 13 different corpuses, created between 1970 and 1974. Why is it important to work in series?

We think and feel that way. We always start with a single subject that we develop, scrutinize and analyze to the last. We do not believe in the single image, especially since it is not always the best one and does not allow us to penetrate a subject. However, a second, then a third representation… offers the possibility of improvement. We produce a lot until we get to the heart of the subject and exhaust ourselves. For our last series of “Beard Pictures” [exhibited at Galerie Thaddaeus Ropac in Pantin from October 2017 to January 2018], we had designed 122 images… It is like writing a novel: requiring a certain number of pages to trace an entire idea.

Do you consider your work as formal as it is conceptual?

We recreate a world from a subject. The way you raise your glass before you start a toast or a door opening into another universe. When you close your eyes, you conceive reality in a new way. 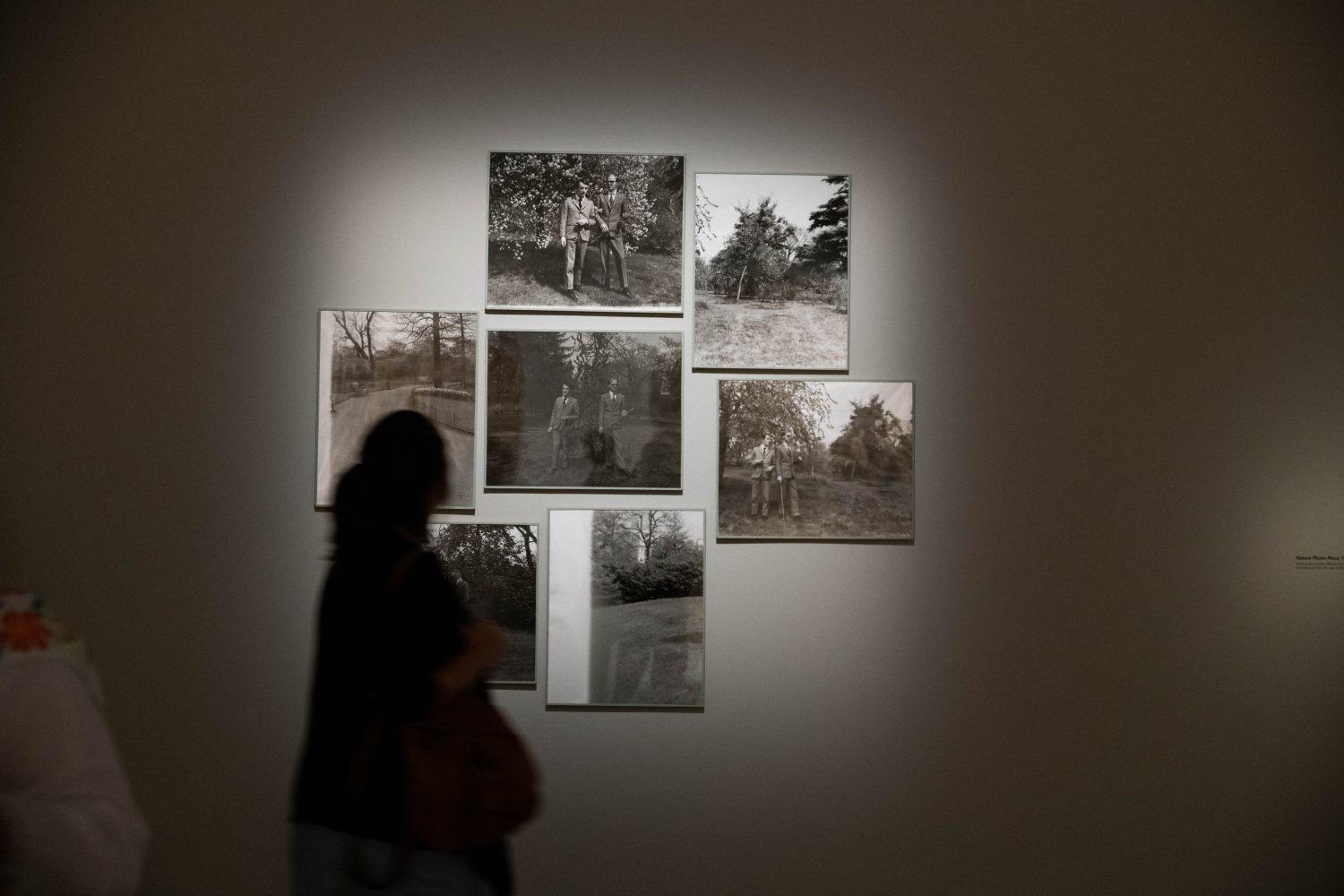 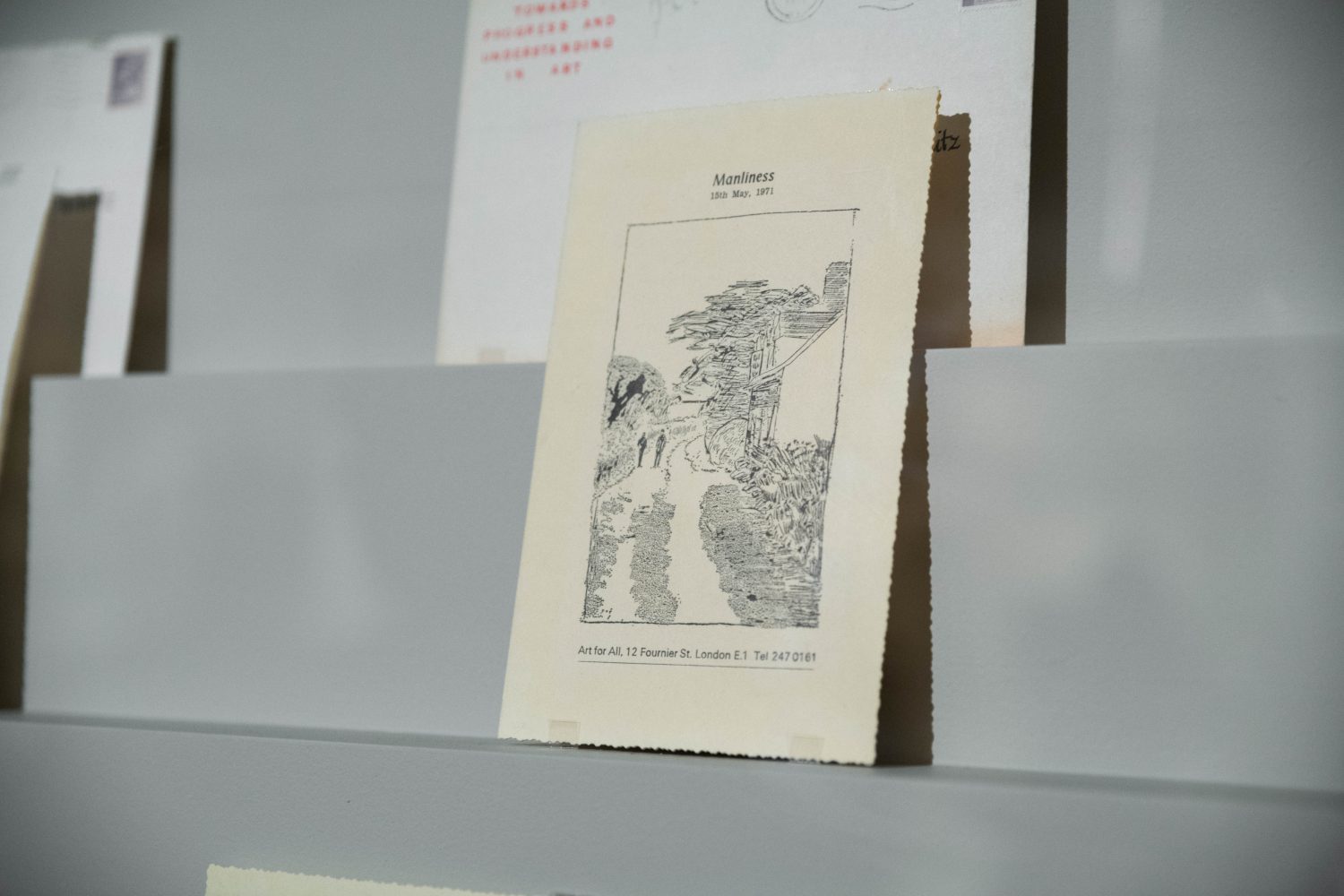 Is there a lot of irony in your work?

Maybe for the spectator, but not for us. We never go to the studio thinking we’re going to introduce irony. What is irony, anyway? It is a concept that many people use without knowing its exact definition, different from humor, which perhaps moves away from the first degree of reality. Our work is very simple and can be interpreted at several levels. Each image allows more than one reading, even if our latest work focuses on the subject of global security, which is today’s general problem in the world.

So do you see yourself as a “witness” to the society in which you live?

We want to be engaged with the public, not just the art world. The moral dimension is very important, of humanism or being together, without God’s help. We never show modern or contemporary art, but a way of life. We reflect the world and think of it in images, estimating that art will survive life. The world was no longer the same after William Shakespeare or Vincent Van Gogh. The image also has the power to inform future generations. Since we started in 1967, the things have changed a lot and we have contributed to it in some way.

How, amongst the photographs at your studio, do you select some to work on?

A photograph does not necessarily have to be a good image. It’s something that we perceive very quickly, at the heart of our rigorous rankings… we prefer imposing formats because the public feels more involved when it is embraced by the image, will remember it longer. As artists, we want the world to be better and the large format allows more confrontation and a kind of “attack”: the viewer will choose some details from the rather simple ideas we put forward. 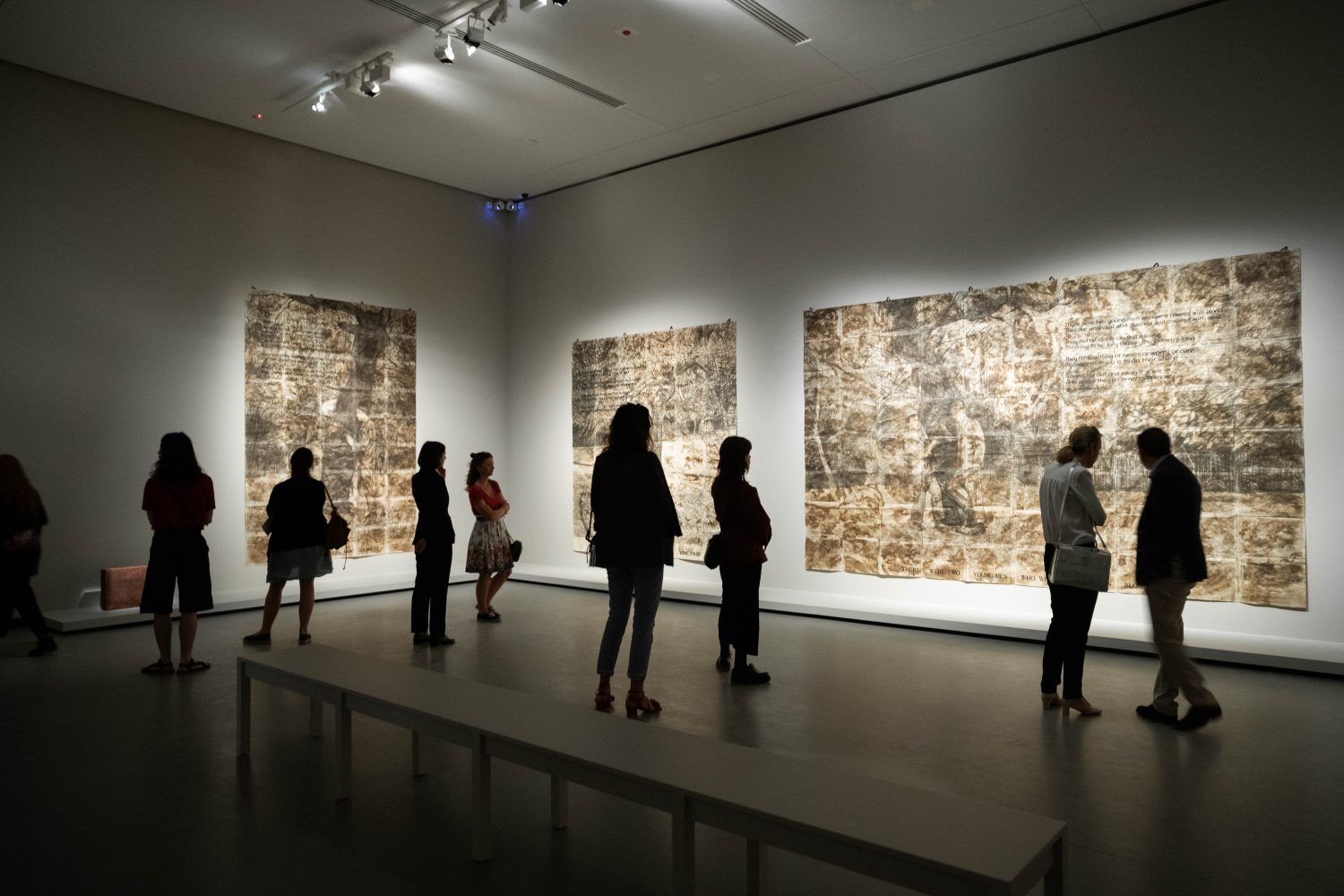 It’s clear from the series of drawings exhibited at the Fondation Louis Vuitton that you have been your own subject since the beginning of your career. Why?

The spectators and the world are our subjects and we consider ourselves donors, suppliers. We are the center of our art because it allows us to project our ideas and our vision, a little like the Pilgrim’s Progress by John Bunyan. We are the protagonists of a journey, analyzing how to behave, what we want to transform, what we find fantastic or analyzing essential themes such as religion, crime or sex.

Do you have the impression that your work is one great performance—a medium with which you started— and that you continue year after year?

We call it Living Sculptures; we do not use the word performance, but indeed, all our images are in this vein. In 1970, we were not inspired by the art world, but by people on the street, the homeless. We were not middle-class students, because we came from poor families and wanted to be our own interlocutors, without being linked to any references. We quickly confronted the world as it is, without art, as if we wanted to clean ourselves up. We wanted to have a freer, emptied mind, in order to be able to create and build our images. 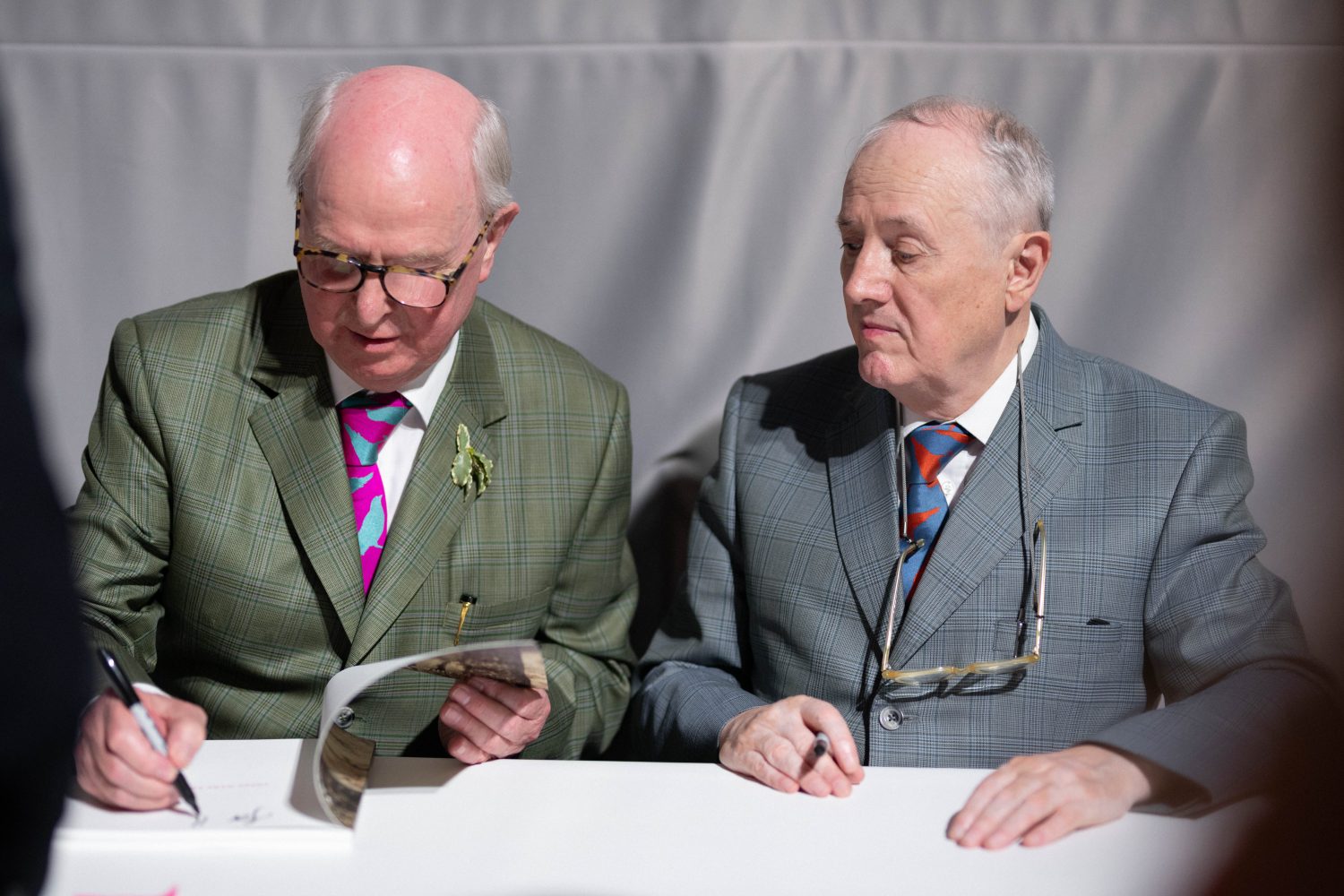 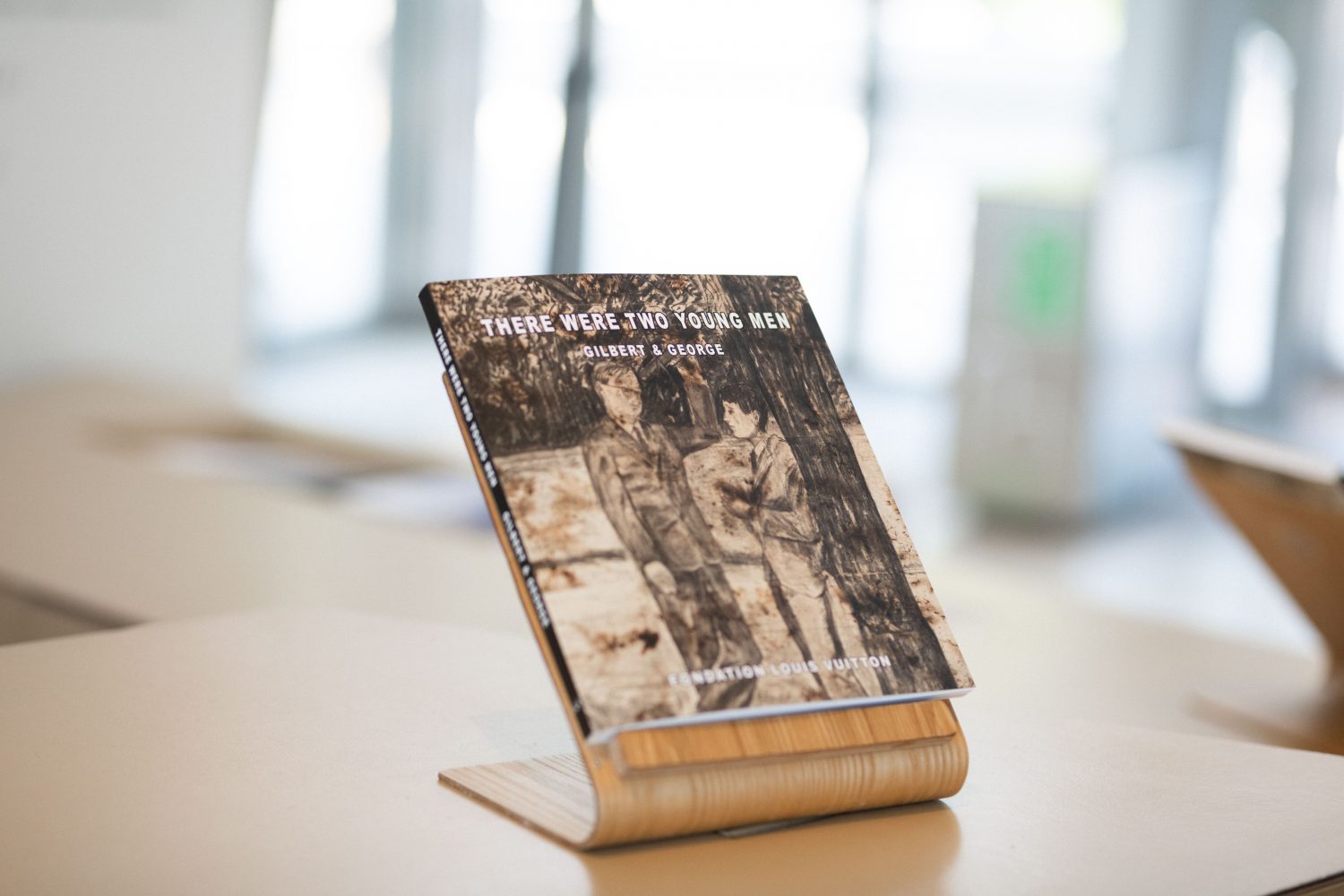 You have, however, chosen classical themes of art history, particularly by working on the body.

We make normal art, without madness. We deal with subjects such as sexuality, alcohol, happiness, nostalgia, religion… the whole range of questions that are within everyone, day and night.

Today we talk a lot about gender issues. Does this subject make you look at your corpus differently?

We have been making gender jokes for almost forty years… because we have never accepted the idea of masculinity or femininity, which depends on the time and context in which you live. This has nothing to do with your individual person. The overall idea of what a man or woman is can vary according to time and geography. It is a creation, because there is no “true” man or woman. Being homosexual or heterosexual is an invention. It’s just a principle of law or religion and we’ve been thinking that since we met in 1967.