Photography is only surface.

After the previous contemporary art exhibitions, including Jeff Koons, Takashi Murakami and Joana Vasconcelos, at the Château de Versailles, Hiroshi Sugimoto is the first photographer to be invited to have a solo show. Unlike the previous 10 editions, however, Sugimoto’s is taking place on the estate of the Trianon, gifted by Louis XVI to his wife Marie-Antoinette. “We thought that for an artist like Sugimoto, we needed to find a more intimate atmosphere suited to the scale of his work,” says Alfred Pacquement, curator of contemporary art exhibitions at Versailles.

For Sugimoto, Japan’s best-known photographer, the exhibition is “a reunion party of the ghosts in wax”. By this, he is referring to the waxwork effigies of monarchs, political leaders and other historical characters at Madame Tussauds in London that are captured in his dramatic black-and-white photographs. Dispersed throughout the Trianon estate’s various sites, the photographs are of wax figures of people that, at some point, passed through Versailles.

Significantly, Marie Tussaud, the founder of Madame Tussauds, was an art tutor (maiden name: Grosholtz) to Louis XVI’s sister Elisabeth. She learnt the art of wax modelling from the Swiss physician/wax modeller Philippe Curtius and, following a failed marriage, moved to England with her collection of wax models. History comes full circle through Sugimoto returning his portrayals of the wax figures to Versailles in a dialogue with the past. “Sugimoto creates associations in his philosophical proposal to rethink history and reflect on it as a continuum,” guest curator Jean de Loisy says. 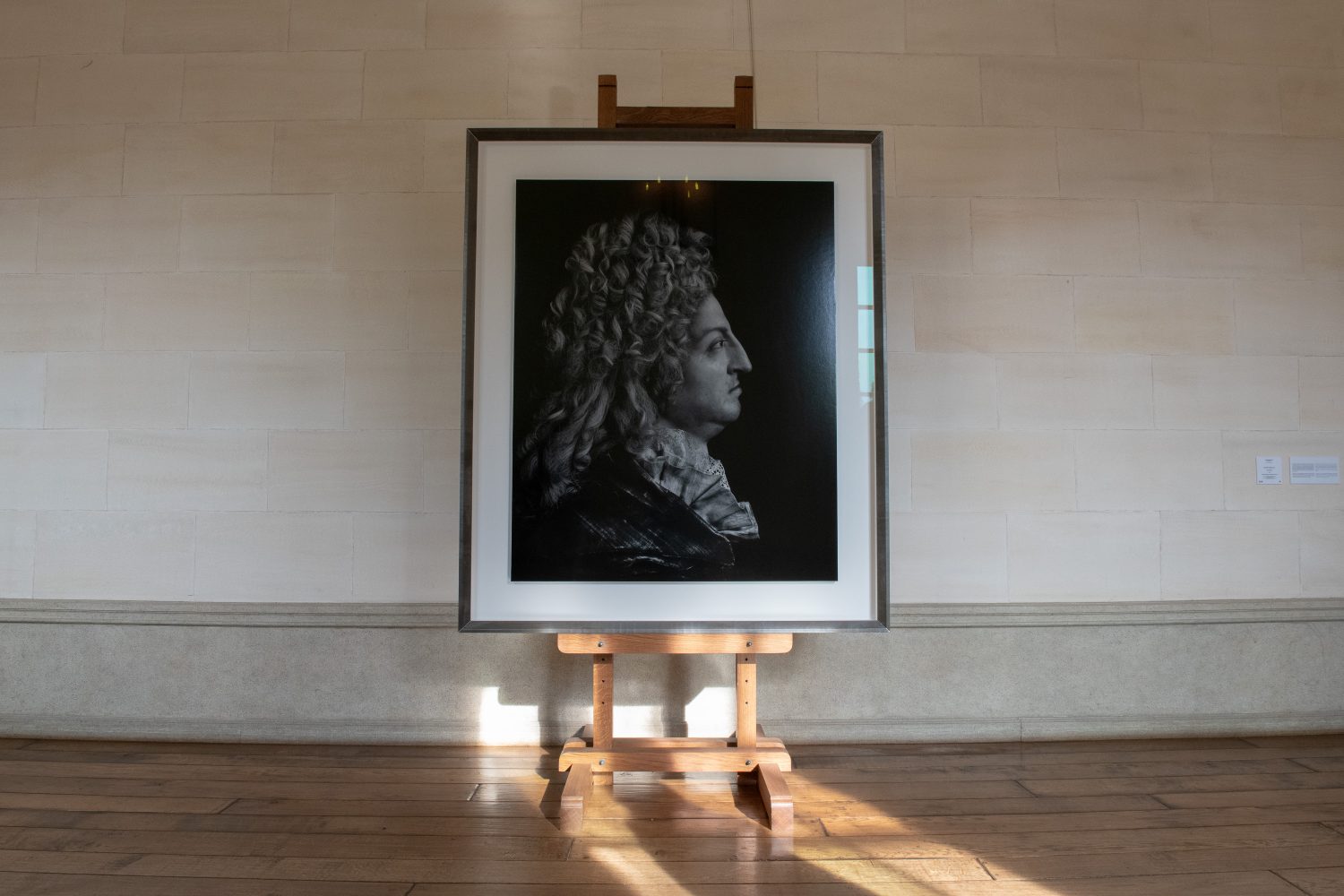 Sugimoto, 70, made the majority of the photographs at Madame Tussauds in the 1990s. Adding to the cast of characters is a new picture of the wax relief of Louis XIV, made from a mould by Antoine Benoist taken 10 years before the king’s death. Installed in the Petit Trianon, it mingles with, among others, Queen Victoria, Salvador Dalí, Fidel Castro, Japanese Emperor Hirohito and actress Norma Shearer playing Marie-Antoinette in W. S. Van Dyke’s 1938 film. “Castro was invited to Versailles by [President François] Mitterrand and said that, although he admired the magnificent beauty, that this luxury and separation between the rich and the poor shocked him enormously,” Loisy recounts.

The other new photograph made for the exhibition is ‘Petit Théâtre de la Reine, Versailles’ (2018). On the stage of the exquisite, small theatre built by the architect Richard Mique for Marie-Antoinette in 1780, Sugimoto set up a screen onto which he projected Sofia Coppola’s film ‘Marie-Antoinette’ (2006), starring Kirsten Dunst. With his large-format camera, he photographed the theatre and the screen for the duration of the film. In the resulting image, the screen is a whited-out box, the rest of the theatre eerily lit, its ornate, architectural details subtly captured. Indeed, the image is part of Sugimoto’s series ‘Theatres’, for which he has been photographing theatre interiors over several decades using no lighting other than the projection of the running movie. 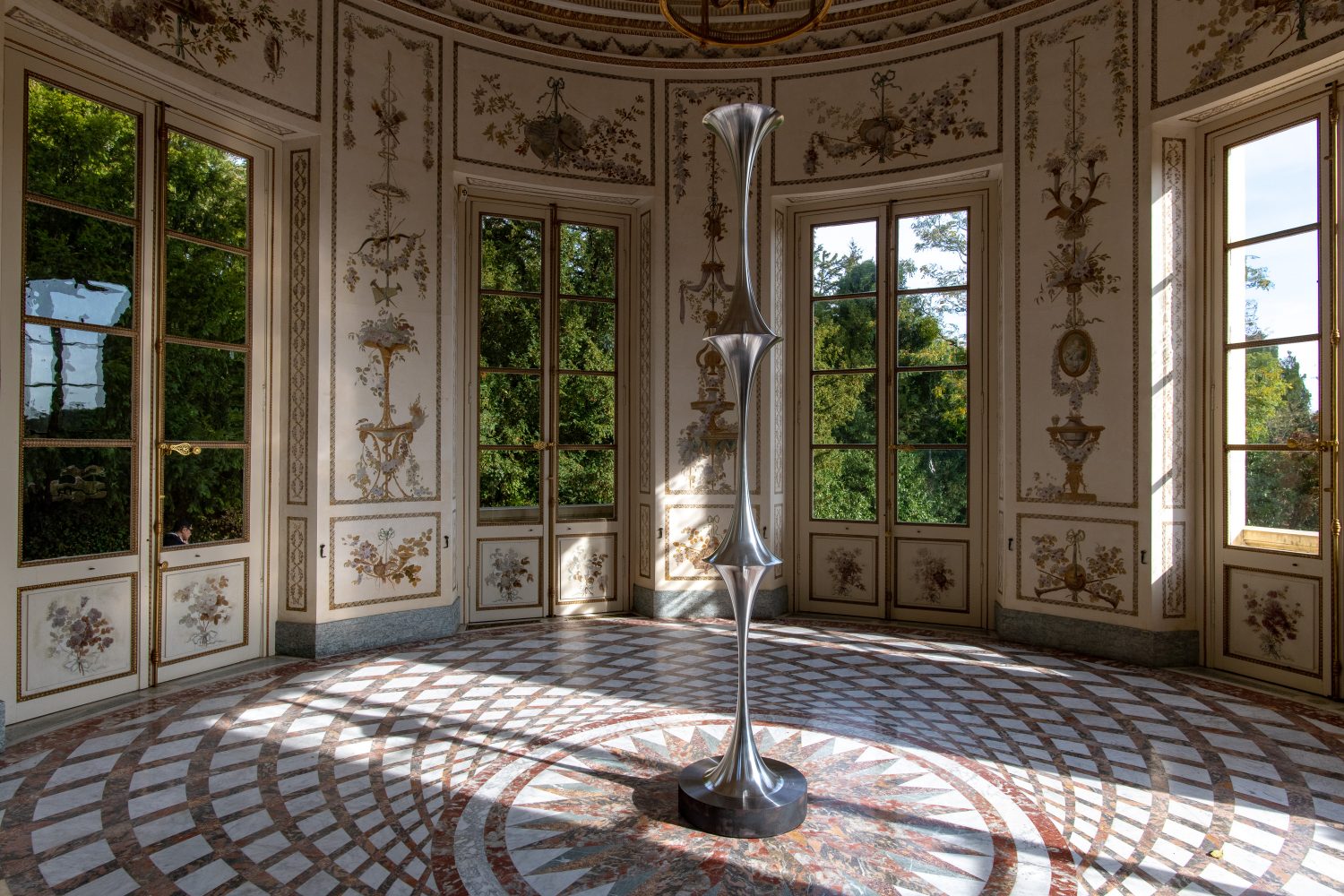 Portraits of Princess Diana and Queen Elizabeth II are in in the Petit Trianon’s chapel while Benjamin Franklin, Napoleon Bonaparte and Voltaire are united in the French Pavilion as they all spent time in Versailles in or around the time of the French Revolution.

Besides his photographs, two of Sugimoto’s sculptural and architectural works are on view. The elegant sculpture ‘Surface of Revolution’, originally made in 2012 and remade for Versailles, is installed in the Belvedere of the Petit Trianon overlooking a small lake. Based on non-Euclidean geometry, it echoes the patterns of curves and ellipses on the octagonal building’s marble mosaic floor and reveals how Sugimoto’s sculptural works have been inspired by Brancusi.

Outside on the Flat Pool of the Grand Trianon is ‘Glass Tea House Mondrian’, commissioned for Le Stanze del Vetro and exhibited on the island of San Giorgio Maggiore during the Venice Architecture Biennale in 2014. Appearing to be almost floating on the water, it is a minimalist, transparent cube connected to the surrounding gardens by a wooden walkway. While the host enters through a normal-sized door, the guest lowers their body to enter through a smaller door in a gesture of humility. The piece recalls the Japanese tradition, rooted in the principles of Zen Buddhism, of welcoming guests by offering a tea ceremony in a small structure detached from the main house. Sugimoto has reinterpreted the tea house aesthetic based on simplicity, quietude and absence of ornament that was invented in the 16th century by Sen no Rikyū, tea master of Japan’s military dictator Toyotomi Hideyoshi. 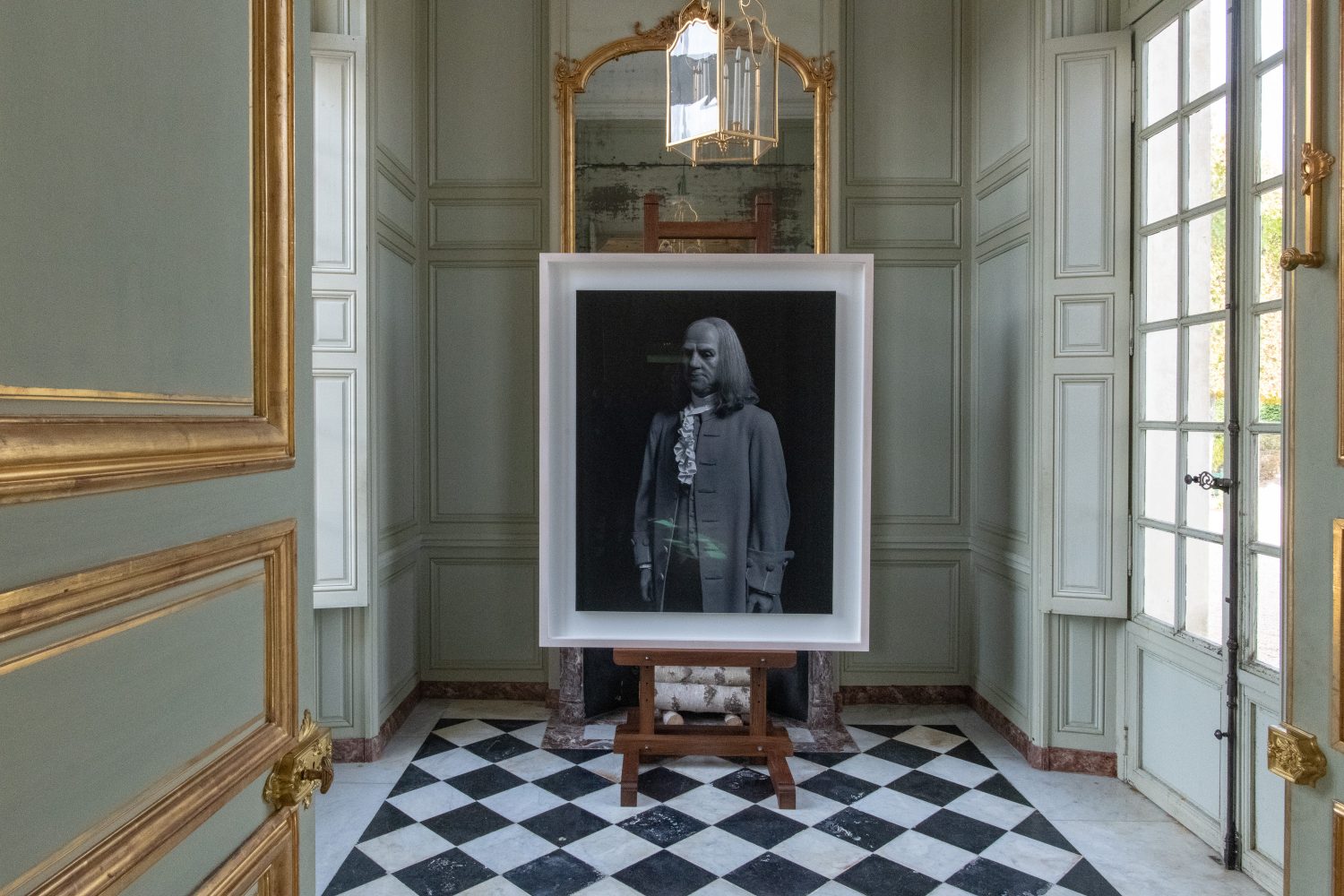 When did you visit Versailles for the first time?

Hiroshi Sugimoto: One year ago. I just happened to come to see the previous show. It was a Sunday. But I was standing in the wrong queue and [because it was taking too long] I decided not to come in. A few months later, Alfred Pacquement called me in New York and said, ‘When do you have the time to come to Paris?’ I said, ‘In two weeks.’ I had a meeting here and so the first time I got into Versailles was to be offered the show.

What was the starting point for your 1990s series on the historical, wax figures at Madame Tussauds in London?

When I started in 1994, before thinking about Versailles, of course, I decided to do a series on Madame Tussauds, with the museum’s permission. And then in 1999, I did another series of shooting at Madame Tussauds. I had one week, every night, after it was closed to the public, until the morning. And I had the freedom to choose whom I wanted to photograph and say, ‘Please bring me Henry VIII and his six wives.’ I photographed maybe 50 or 60 figures but for this exhibition I carefully selected the portraits of historical people who had a link visiting Versailles. This is a reunion party of the ghosts in wax.

By photographing wax figures, what did you want to express about how photography can capture a presence?

To make ‘Petit Théâtre de la Reine, Versailles’ (2018), you set up a screen on the stage of the Queen’s Theatre onto which you projected Sofia Coppola’s film ‘Marie Antoinette’. What was your motivation for photographing the entire movie?

It’s very interesting because it’s only the camera that could see it. The human eye couldn’t see it. It was an exposure for two or three hours. Any kind of movie [in my ‘Theatres’ series] turns out to be quite wiped out. The entire filming of Sofia Coppola’s ‘Marie Antoinette’ is just a white light in the photograph. 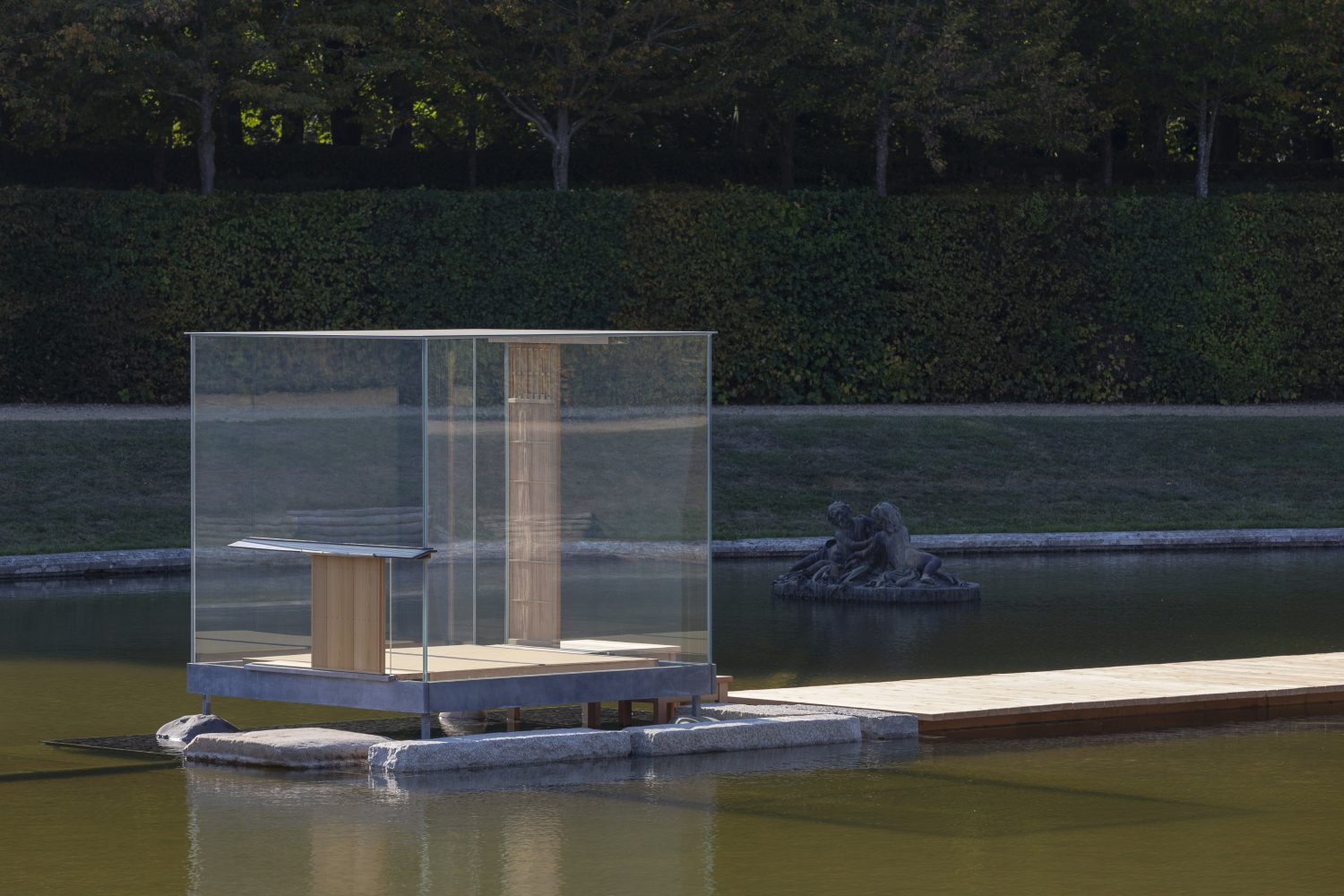 What intersection between the Japanese tea house tradition and the abstract art of Mondrian did you want to express in ‘Glass Tea House Mondrian’?

The concept of the tea house was created by the tea master Sen no Rikyū in the 16th century. He paid attention to details of very abstract quality: how the doors were designed and where the position of the square [should be]. A few 100 years before Mondrian came to the abstract concept, the Japanese already had the feeling of abstract composition. This is my contribution of bringing those two ideas together in a contemporary sculpture.

Can you elaborate on your design and how it has been adapted for Versailles?

It’s a very skeletal, transparent tea house, probably for two guests only. I put a long bridge here that’s more stage-like so we could have a beautiful dance performance by Kaori Ito [a dancer/choreographer and resident at the 104] on the opening day within the glass tea house and on the bridge. The glass teahouse is a 2m2 cube, so she could move within it like in a transparent cage. Aurélie Dupont [Paris Opera’s director of dance] came to visit my Odawara Art Foundation’s Enoura Observatory in Japan in July and danced on the stage. So this is a connection between French and Japanese dancers; it’s a nice exchange of affinities.

How do you feel about Christie’s auction house having a sale of your photographs on 8 November 2018?

That’s nothing to do with me, that’s the market. So I am not participating. Christie’s is doing it without me. I feel like I’m already dead so that the market may go up! The artists that have passed away probably have the [higher] prices.