Ceramics can either go kitsch, or embody utter beauty and delicacy

Born in Brest in 1986, Jean-Marie Appriou lives and works in Paris. In a few years, he established himself in the French, then international artistic scene through his exclusive practice of sculpture and installation. In the studio, he never stops experimenting with different materials, and observes their transformation into his earthly yet dreamlike universe, always informed by the everyday life and a certain mysticism. We met with the artist, which work is currently exhibited at the Louis Vuitton Foundation, and soon part of the Palais de Tokyo’s new seasonal exhibition.

As a student at Rennes’ École des Beaux-Arts, Wilfrid Almendra and Dewar & Gicquel were part of your close circle. Did they encourage you in pursuing sculpture?

In my fourth year at the Beaux-Arts in Rennes, one of my teachers, Adalberto Mecarelli (who had also been their teacher) allowed me to do an internship with Daniel Dewar & Gregory Gicquel. I assisted them for a while, which led me to see how to envisage sculpture on another scale and to leave the experimentation centered on Fine Arts, to go towards another reality. Like any teenager interested in art, I had started with drawing and painting, but with Adalberto Mecarelli, I immediately grasped this new medium and started to realize projects that were quite ambitious in terms of size. I experimented with stones, but also with ceramics, especially since my father had built a ceramic kiln in our house.

Was it a return to a notion of materiality and “handmade” art ?

Yes, all the while accompanying a renewal of the figurative. Through figuration, I felt free to go into narration and sculpt bodies, without this idea seeming to belong to the past. 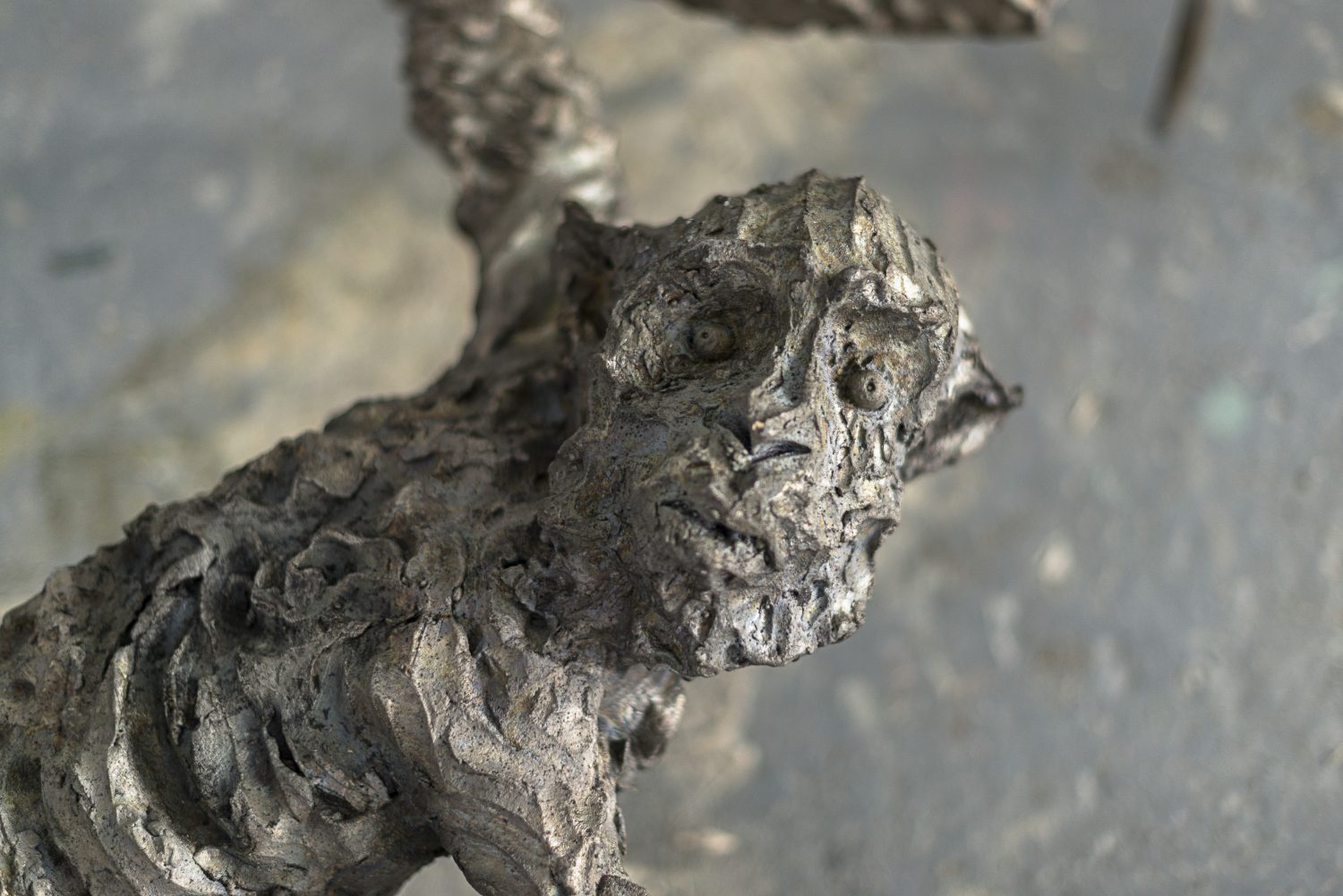 You spend long hours in the atelier. Did you develop a hierarchy between the artwork’s conception and its realization ? Besides, do you draw ?

I am sometimes asked for sketches before validating projects extending over several years, but I am not at all in the medium of drawing. Plus, if I put an idea on paper, it’s as if it had already been completed, and it bothers me to reactivate it. I prefer to start with soil or some other material. Things happen by doing, and it leads me to new pieces because I pursue a line, which leads me to open to another perception. Despite everything, if I manage to elaborate sketches, they happen to be very basic geometrical diagrams. On the other hand, I write words or annotations, rather in poetic forms. They’re guiding me during the modeling process. I have an intuitive relationship with matter, while initially following a fairly defined idea.

Does your process deliberately include the notion of series? There are recurring figures in your work…

I have worked a lot on bodies in the last three years: Children’s bodies in 2016, men’s bodies in 2018, and women’s bodies today. Characters and elements come back, like the astronaut child, the beekeepers, the swimmers or the flowers. The aromas, then the raspberries arrive in Spring. They’re followed by other species that are more related to winter. For my first solo show at Clearing New York in 2017, for example, I had imagined a universe inspired by the forest, the wave, but also by how we perceive breathing. The forest is perceived as a lung; it is accompanied by the flutist child, the archer woman… Everything was guided by the theme of the breath, with butterflies flapping their wings to the rhythm of day or night, like the duality between inhalation and exhalation. Then I cut and remove. Michelangelo executed sculpture as a subtraction: “minus one, minus one”, while Auguste Rodin and Alberto Giacometti thought of it as a “plus one, plus one” pattern.

Today you are moving towards larger formats. Is it the same narration?

Large formats interest me particularly for outside pieces, as I was able to do for Versailles’ Bosquet de l’Obélisque. I then had the desire to dialogue with perspective. Not only is it more imposing, but it allows me to question another scale within the same narrative. In a huge forest, there is this tiny detail of a child blowing in a blowgun or holding a bouquet of flowers. I like to juggle between different scales. 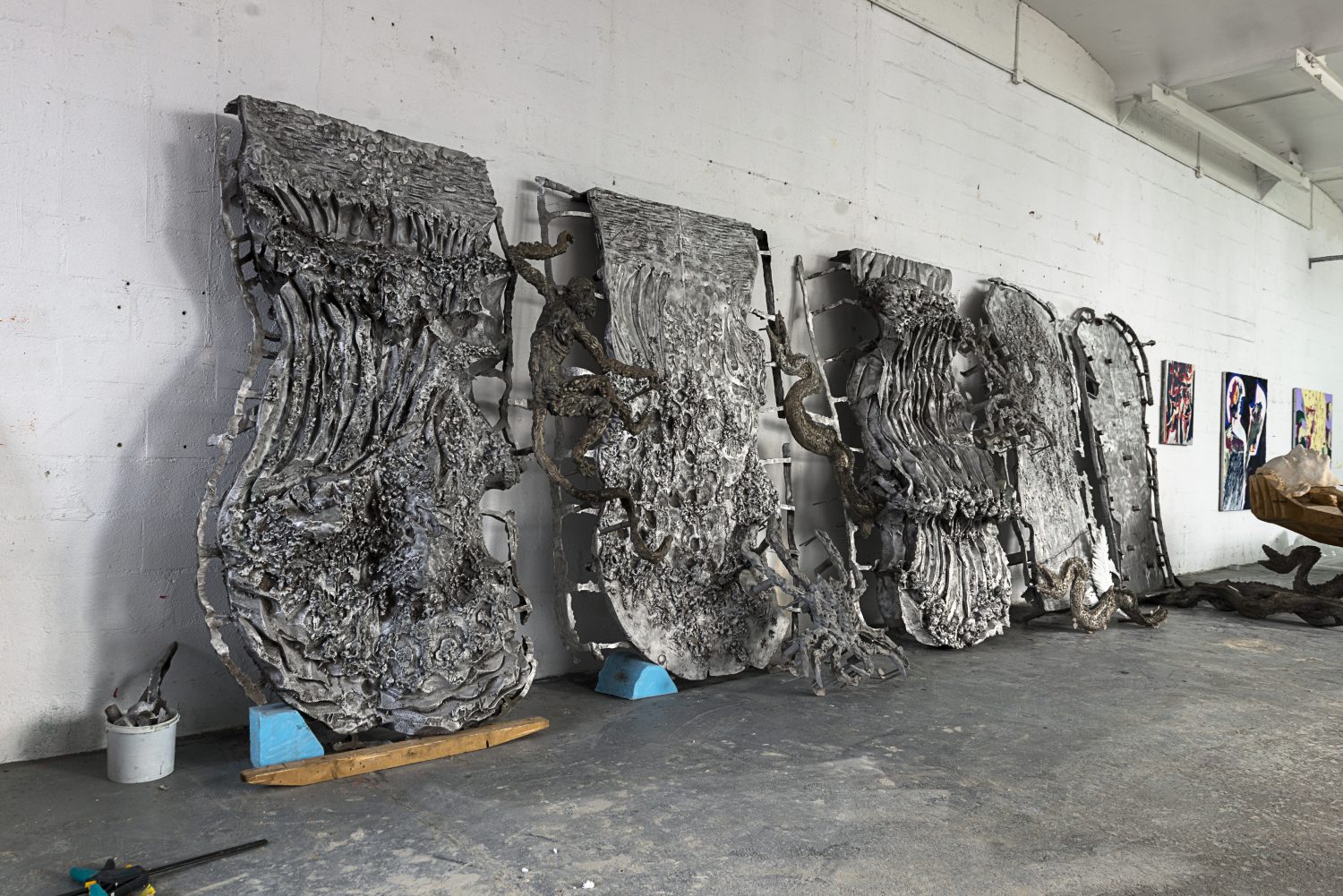 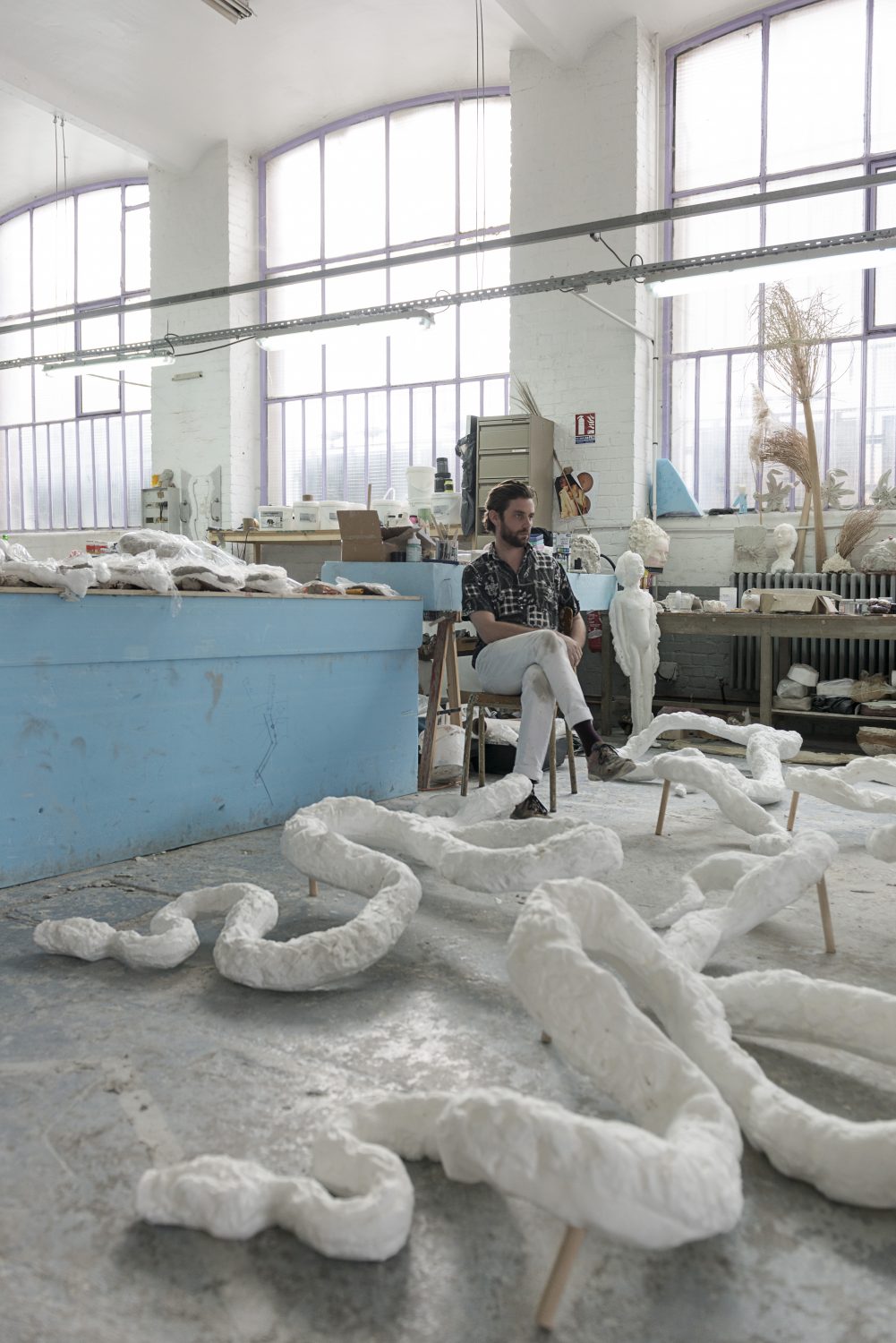 How do you experiment with materials?

I started with ceramics and I’m coming back to it, especially since I just built a large oven in my atelier to bake bas-reliefs. What I also like is the fact that everything is done internally. I model the clay before putting it to dry and bake. There is not much time between conception and the moment I pick up the object. I value the trace of the hand: I met craftsmen with whom I collaborate, notably when I work with glass, which is a material you cannot improvise with. It led me to work with the aluminum foundry. I sculpt all my models, on scale and in the workshop, before they go to the foundry. Then, with my team, we go see the founders and we make them step out of their knowledge. We reconsider what they see as “mistakes” from a technical point of view. Still, I don’t want to let a work slip away and get it back months later, because that would no longer be my identity.

In evoking the notion of error, you remind me of what you said in a previous interview about the “deceptive” side that can come with ceramics…

I remember this Japanese potter observing that, just as you open the oven’s door, the raw shaped objects becomes cooked, its size is reduced, and it changed color. It is about producing something we have no control over. He also talked about the “hammer test”, which was this moment when he either blew a hammer to destroy the object, or to create something worthy of an emperor. Ceramics can either go kitsch, or embody utter beauty and delicacy.

It also reminds me of Neïl Beloufa’s work. He’s an artist of your generation, who deliberately unfolds himself in a work that is not seductive, sometimes “badly done,” or that reveals “the secrets of manufacture”. Are those considerations you also nourish?

Since my work translates through so-called “noble” materials and since it is figurative, these are questions that are indeed present. Plus, the manufacturing process is visible in my sculptures, notably in Lips and Ears, presented at the Louis Vuitton Foundation. The reality of the “behind the scene”, as with Neïl Beloufa, adds a more generous and enigmatic dimension. Maybe we don’t want to just show magic…

About ceramics, you said you wanted to embody something beyond this thin layer, this “lie”… Can this be attributed to your work as a whole?

Sculpture is a body, and this applies to all types of supports. Bronzes generally appear as powerful, but in archaeological museums, with time doing its work, we can see it is a thin, quite eroded film. The word “lie” is a bit strong. What I wanted to say is that enameling, or even glass, is a layer that must embody an energy. The “skin of sculpture” interests me, and my portraits are often masks. The link between the inside and the outside is one of the great questions of sculpture.

At the same time, I find that your surfaces are very pictorial…

When I get asked what my references are, I happen to cite more painters than other artists. I love the work of Pre-Raphaelites like Gabriel Rossetti. When I model plants or mineral elements, I can also think of Arnold Böcklin, or Pierre Puvis de Chavannes. I’m drawn to his flowers, fruit baskets and women, as well as his approach to decorative arts. When I sculpt a butterfly or a shell, I do it sincerely. It is not a caricature of a butterfly made with cynicism, even if some representations, such as angels or swans, are still on the edge… When I didn’t have a studio in Paris, I used conduct meetings at the Gustave Moreau Museum. Once I was surrounded by these bodies, these drapes, these flowers, I could easily talk about my work! It set the scene…

These surfaces also remind me of Odilon Redon’s pastels…

I really like this artist, who was an incredible colorist. Besides, I now pastel-color my ceramics or my woods, as I did for a very large marble shown last year at the Vienna Biennale. I also admire Paul Sérusier, the Nabis or Paul Gauguin, and this is perhaps linked to the fact that I grew up in Brittany. The Notre-Dame de Trémalo chapel or the large calvaries – some of which present three hundred granite figures of different sizes, retracing the history of the Gospels, but also evoking the underworld or the devils – inspired me and made me discover sculpture. The village squares constitute my first relationship to sculpture, with these calvaries which narration is articulated in the manner of comic strips. The comics by Moebius or Alejandro Jodorowsky also particularly inspired me. This medium offers, with authors like Alan Moore, complex narrative constructions, while sometimes developing a universe linked to magic or everything cosmic.