The visceral experience of making things

The American artist Kiki Smith is the last artist to have a show at the Monnaie de Paris, which is ending its contemporary art exhibition programme. Smith has explored a myriad of subjects in her work, from the female body to Catholicism, witchcraft, fairytales and the natural world. Her range of media is equally diverse, incorporating sculpture, drawing, etching, printmaking and tapestry – the rich oeuvre in which this has culminated is revealed in her exhibition, running until 9 February 2020. Smith, 65, grew up in a creative household. Her mother was an opera singer and her father was an artist. Both instilled a “blind faith” in her that has underpinned her prolific career. After having lived for decades in New York, she resides in Catskill, upstate New York.

Your exhibition at the Monnaie de Paris follows on from your travelling retrospective, Procession, at the Haus der Kunst in Munich, the Sara Hildén Art Museum in Tampere, Finland, and the Belvedere in Vienna. How did approach it?

Part of me wanted to make something different for the Monnaie de Paris. I wasn’t so interested in making a retrospective but an agglomeration of things as I’ve been going in many different directions in my work.

In the early 1990s, you made several pieces about womanhood and bodily fluids. What kinds of thoughts were raging through your mind?

When you’re younger, there’s so much you need to confront about being in a body. I was about 40 when I made several works about the body’s orifices and how fluids are uncontrollably falling out of you all the time as a female. I made one about peeing, one with blood and one [Untitled III (Upside-Down Body with Beads),1993] about an indeterminate spill. A friend of mine had sent me a postcard of a gargoyle that was cantilevered off a church and peeing on your head. So I thought I would make a cantilevered piece but had no idea how. I ended up making a bent-over body. When my mother broke her hip, I went to stay with her and started making these beads as a kind of spill [of liquid]. 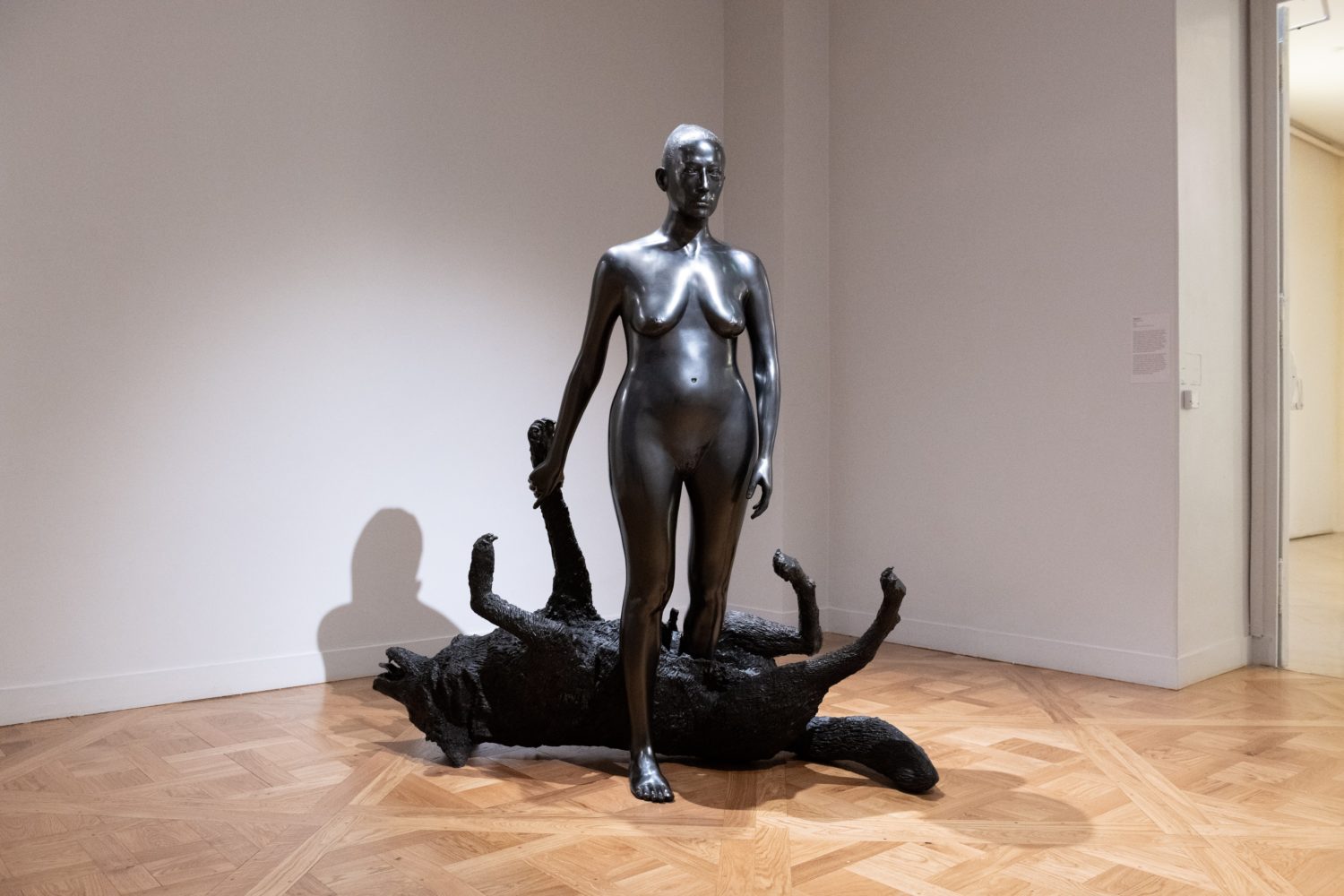 Your sculpture Pyre Woman Kneeling, 2002, is about a woman deemed to be a witch being burned at the stake. What propelled you to make it?

I was asked to participate in an outdoor sculpture competition in Manhattan for the Irish Hunger Memorial [which was won by the artist Brian Tolle]. I’m Irish-American so the Irish potato famine [1845–1849] certainly affected my family. I didn’t have a good sculptural idea about the famine. So I made these women on pyres for witch memorials because many women were killed [after being found guilty of witchcraft]. I love the image of Christ on the cross – ‘Why hath thou forsaken me?’ – and I thought women were in that situation.

In the mid 1990s, you started making drawings of animals and birds, expressing an interest in the natural world. What prompted this shift in your practice?

I went to the Peabody Museum of Natural History in Harvard to look at glass flowers and taxidermied animals. I spent a lot of time making drawings that I turned into prints, which I used to make models for three-dimensional work. A conservator there talked about the loss of habitat, mammals and insects because of human encroachment. That really changed my life. I thought that I no longer needed to be concerned about bodily things; I could pay attention to the outside world and that mixed into [my love for] fairytales.

After hearing about the restrictive abortion laws passed recently in some US states, do you ever consider revisiting women’s rights issues?

I don’t because I don’t feel that I’m in charge of my work or that I’m directing it. Sometimes I’m jealous of all these people making things today with bodies and think: ‘Oh, I used to make that!’ Maybe it will come back some day but it’s not something I’m trying to control. I let the work go where it wants. 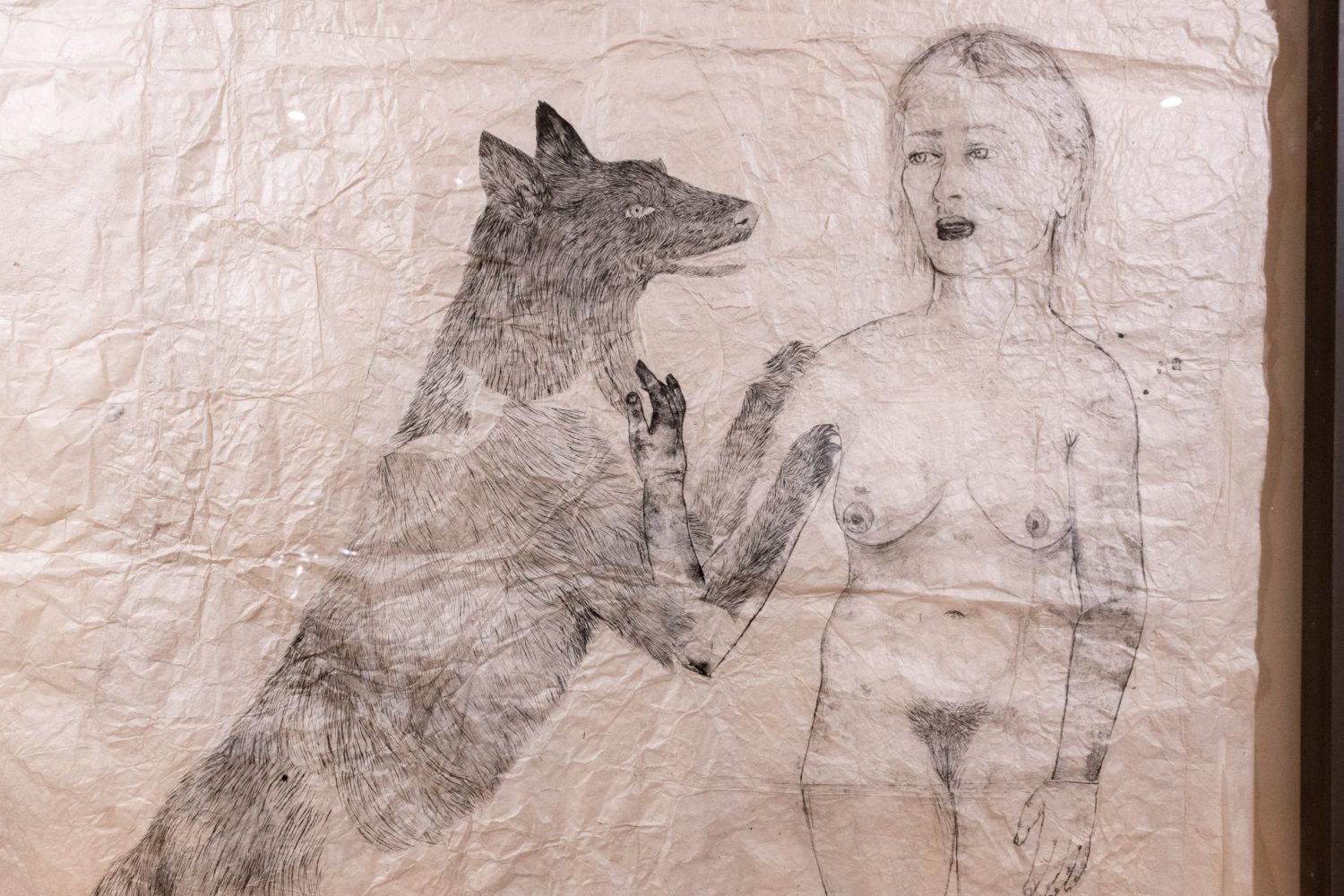 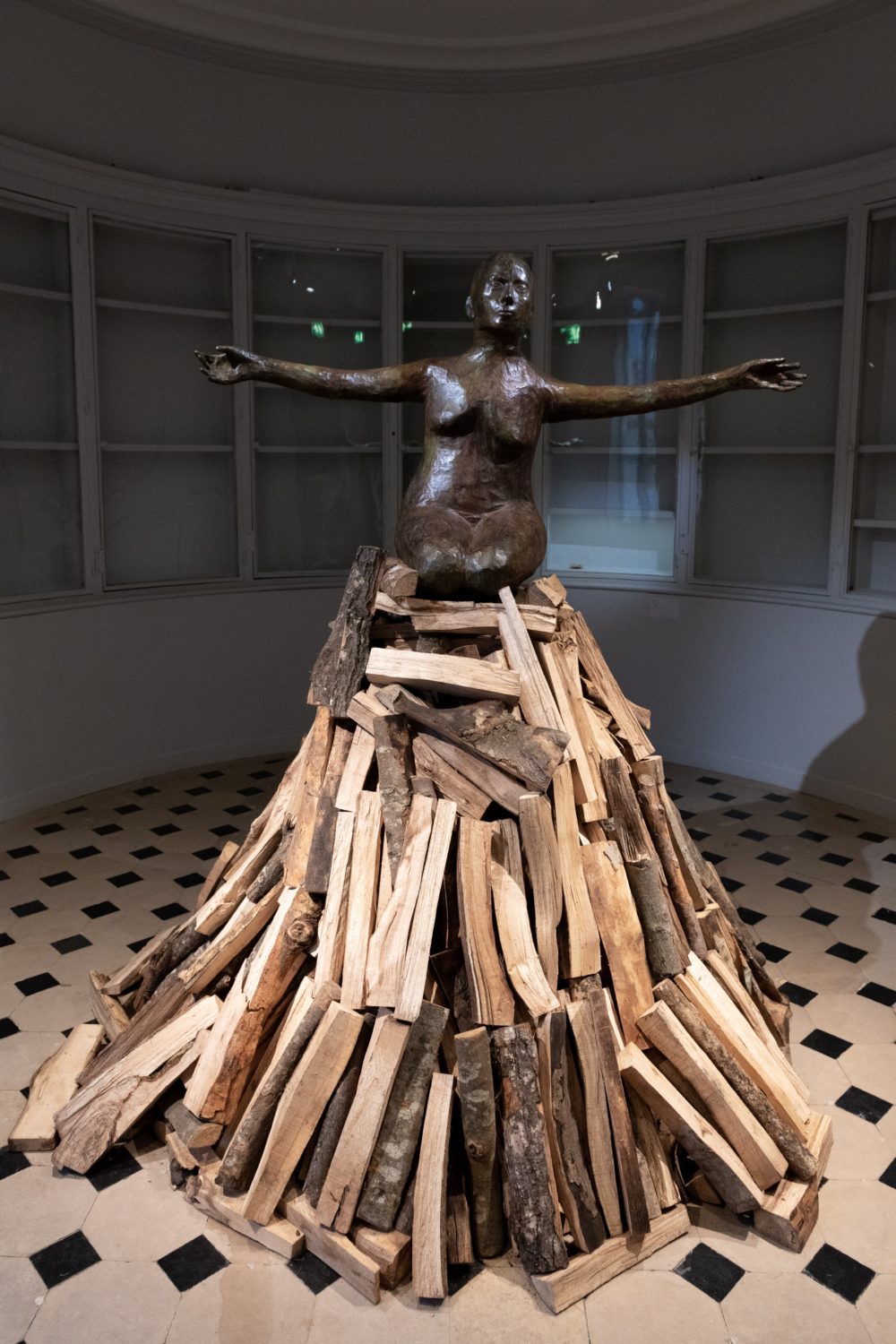 What led you to make tapestries and what has this opened up for you?

I’ve loved tapestry since I was a child. My sister, an artist, moved to France over 30 years ago and my mother and I came to visit her once and I went to Angers to see the Apocalypse Tapestry [a medieval masterpiece commissioned by Louis I, duke of Anjou, in 1375]. The imagery is very vivid, it required a magnitude of effort and it’s one of the most profound, rich and inspiring things I’ve ever seen. Some years ago, Magnolia Editions in California, which works with Jacquard looms, invited me to work with them. Until then, I’d been making mostly black-and-white drawings and didn’t have the imagination to use colour. Making tapestries gave me the opportunity to use colour and I started making [colour] drawings. So far I’ve made 13 tapestries and I’m hoping to make more.

The tapestries are fantastical in how they depict animals, bees, stars and the female body. What ideas inspired you? Were you reflecting on climate change?

I started making them in New York but they developed more when I moved upstate, where you’re surrounded by nature, animals, plants and insects. We have 60 beehives [near our house]. I wanted to make tapestries that are a combination of 1920s Art Deco, Hollywood, the Middle Ages and hippie art, mixing aspects of the roaring Twenties and pageantry. But then the deer kept crossing the road or the foxes were singing at night [and those observations entered the works]. To me, nature is precious and wondrous, miraculous and beautiful. Nature is very good at taking care of itself. It’s our intervention that causes the mayhem.

What can you tell us about your longstanding engagement with printmaking?

I’ve been deeply involved in etching and printmaking for 30 years. But I’m still at the tip of the iceberg! There are whole processes that I’ve never got near to. I bought myself a printing press this year and I’m fixing up a building so I can use it. 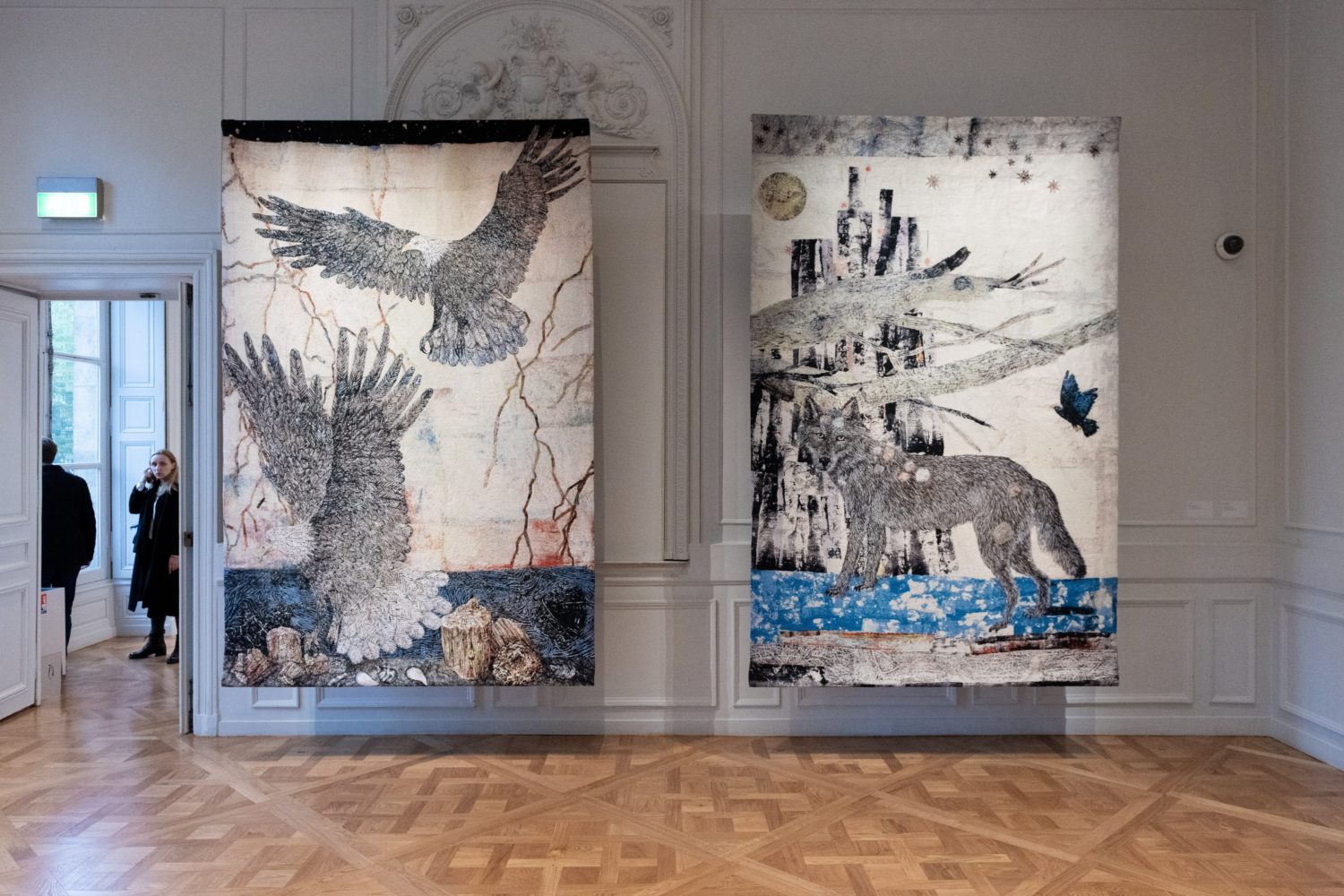 I read that you aspired to create a chapel. What’s happening with that?

Bard College in upstate New York said I could do it, if I raised the money. But I’m not good at that part. So it’s on hold. Maybe some day someone will say: ‘I’ll give you millions of dollars to do this.’ Or maybe I’ll make another little chapel some place else. But I’ve made a synagogue window at Eldridge Street Synagogue in New York [inaugurated last year] which I’m very happy about.

Did you love drawing as a child?

Some people at school had a tremendous aptitude for understanding visual language or could draw perfect pictures of people, dogs and cats. I had zero aptitude. I had a friend who could do anything but it meant nothing to her. I couldn’t do anything but that motivated me. Another friend told me that they stopped being an artist because they’d never be as great as Van Gogh. I thought: ‘I’ll never be as great as Van Gogh, who cares about that?’ Nothing stops you being an artist; art is self-instigating. That doesn’t mean you can have a career or pay the rent. But you can [create work] if you’re willing to invest the energy. When I was younger, I made all my furniture.

What does being an artist mean to you?

Being an artist is about trusting what I’m given and having blind faith in it. I don’t have any agenda to get anywhere or master anything. I’m just interested in the struggle and visceral experience of discovering different methods of making things. I need to stay at home and stare at the walls for long periods of time before something occurs for me to pay attention to it. But there’s something very pleasurable about things falling into your brain that you can bite into for several months or years.