I leave myself totally free in the assemblages

Born in 1983, Marion Verboom is currently the featured artist at Galerie Jérôme Poggi. Here she has unveiled the results of her LVMH Métiers d’Art residency at Manifattura Thélios, one of the group’s production sites dedicated to manufacturing eyewear, located in Longarone, Italy. The artist, who graduated from the Beaux-Arts de Paris and studied under Elsa Cayo, continued her training at De Ateliers in Amsterdam under the direction of sculptor Didier Vermeiren. The six-months residency allowed her to experiment with acetate and brass, materials brand new to her practice, resulting in fifteen works.

For this new exhibition, “Ester,” were all the pieces created during your residency at Thélios?

The works were indeed made in this brand-new factory, which had just opened—I even arrived before it was officially inaugurated. The rules of the game at the residency were to work with acetate—which is the material used to make eyewear frames—and brass. For me the project was very exciting because I was fascinated by this transparent, organic and visceral material. I had to understand what it was made of, because I had never used it before. In the factory, everything is automated: each very precise gesture is made working with digital milling machines. However, I wanted to revisit this acetate technique, to apply it to my usual moulding work, so that I could manipulate it manually.

Does the person selected for the LVMH Métiers d’Art residency apply to an open call, or did you have to propose a specific project?

Léa Chauvel-Lévy, director of the program and also curator of this exhibition, initially selected artists she found had obvious connections with the material. The materials proposed to the artist usually correspond to their existing type of production. We had met at my first exhibition at Jérôme Poggi in 2017, and very early on she thought that acetate and brass could bring me new perspectives. So I created a dossier, and then I was selected. The purpose of the residency is to generate an encounter between a creator and a material that is not often used in the field of art—we tend to use plexiglass or other plastics instead. I did some laboratory studies: I discovered this material in the form of chips but my first intuition was to make it liquid, thanks to its acetone component. It was important to take into account the drying of the acetate. I then developed, experimented and made moulds. This made it possible to create the rough textures and ‘accidents’ that interested me. I didn’t want to work the acetate in an automated way, but instead wanted to grasp it directly with my hands! 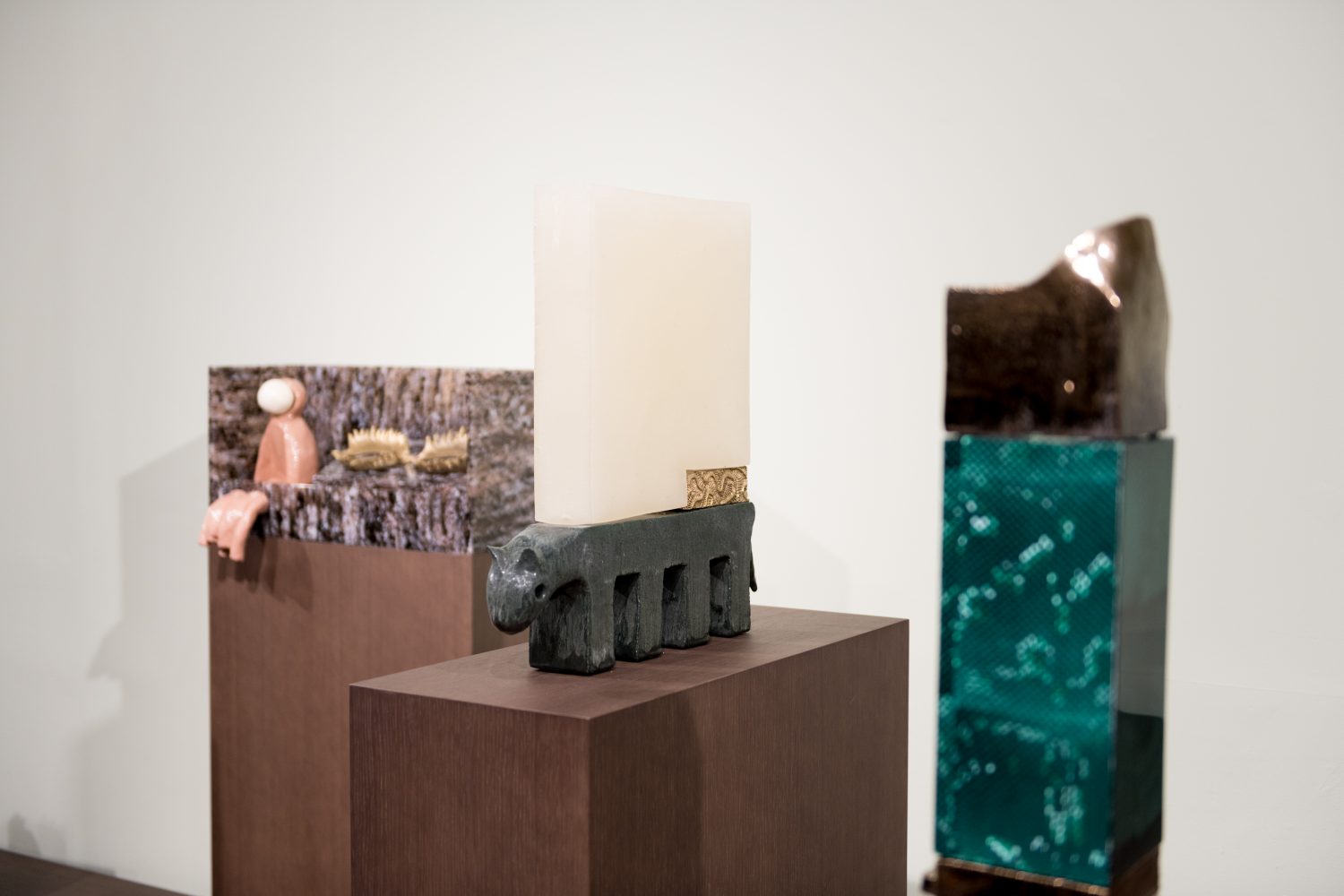 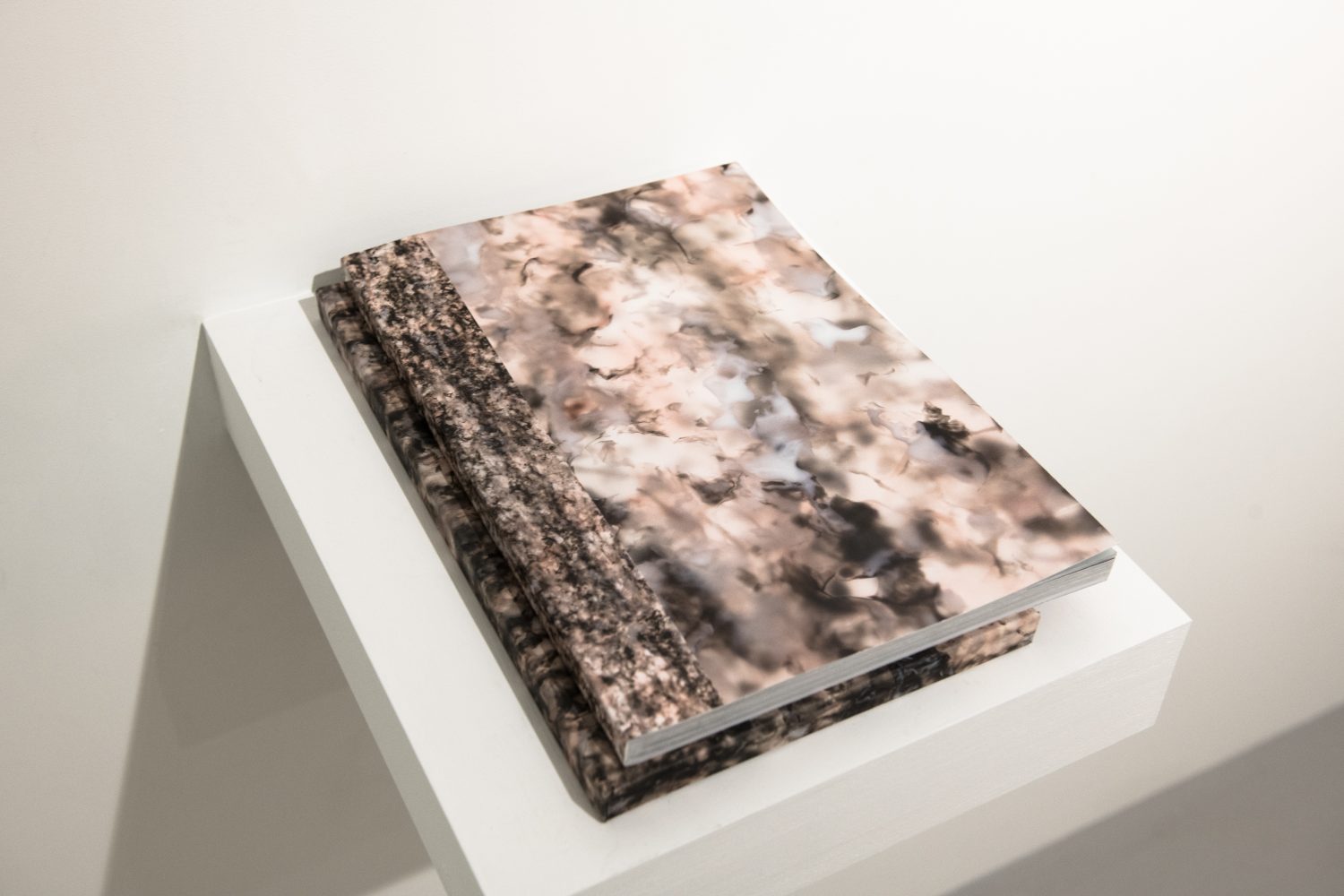 Does the exhibition present, and allow us to understand, different stages in the evolution of this material?

Yes: the acetate, which I liquified and moulded myself in silicone containers, is different compared to the acetate developed in the factory, which is granite and pink. I deployed the colors I had already used in this ossicle-shaped piece, “Axe,” which was my first production there. It creates a link between bioplastics and the theme of sacrificial objects. These colors are also linked to those of [Italian manufacturing company] Mazzucchelli and I wanted to show an unmodified palette for these acetates: to show milky and opaque versions, or with a rather complementary relationship to light. Another possibility was an unprocessed acetate, which I wanted to use as a paste. So I went with my silicone moulds to recover this paste that I’d integrated into different materials. I really like the ‘iceberg’ or ‘melted snow’ aspect, which develops differently depending on the quality of the mould. A wood will produce a soapy, smooth acetate, with multiple rough patches, while a plaster will lead to an unprocessed acetate like silicone.

Drawing is very important in your work, and even functions as an independent medium. How were the pieces in the exhibition conceived? Through sketching, or in a more conceptual way?

For this project, I didn’t start with drawings, but I developed my work almost like a lab technician by transforming the material. Usually, drawing is used to anchor my sculptural practice and help me build volume, generating a context for my imagination. But here, acetate and brass already provided me with a kind of program, a meeting between different materials. Since everything had to be developed within a few months, I had to be quite fast in making my discoveries.

Would you say your work is empirical—that it always extends into the observation of the material?

Absolutely. At the beginning, when I was moulding, my research was to try to understand how catalysis works, and to grasp that moment when the material hardens. Compared to resin, cement and plaster, acetate reacts differently: it tends to dry in its shell and is always soft to the core. It is a material that is very difficult to tame! The other technique I developed is enameling, using terracotta as a core. The porosity of this material allows the acetate to adhere like a carnal envelope on the skeletal core, to absorb moisture and to show on the surface the ‘accidents’ and volcanology that appears. 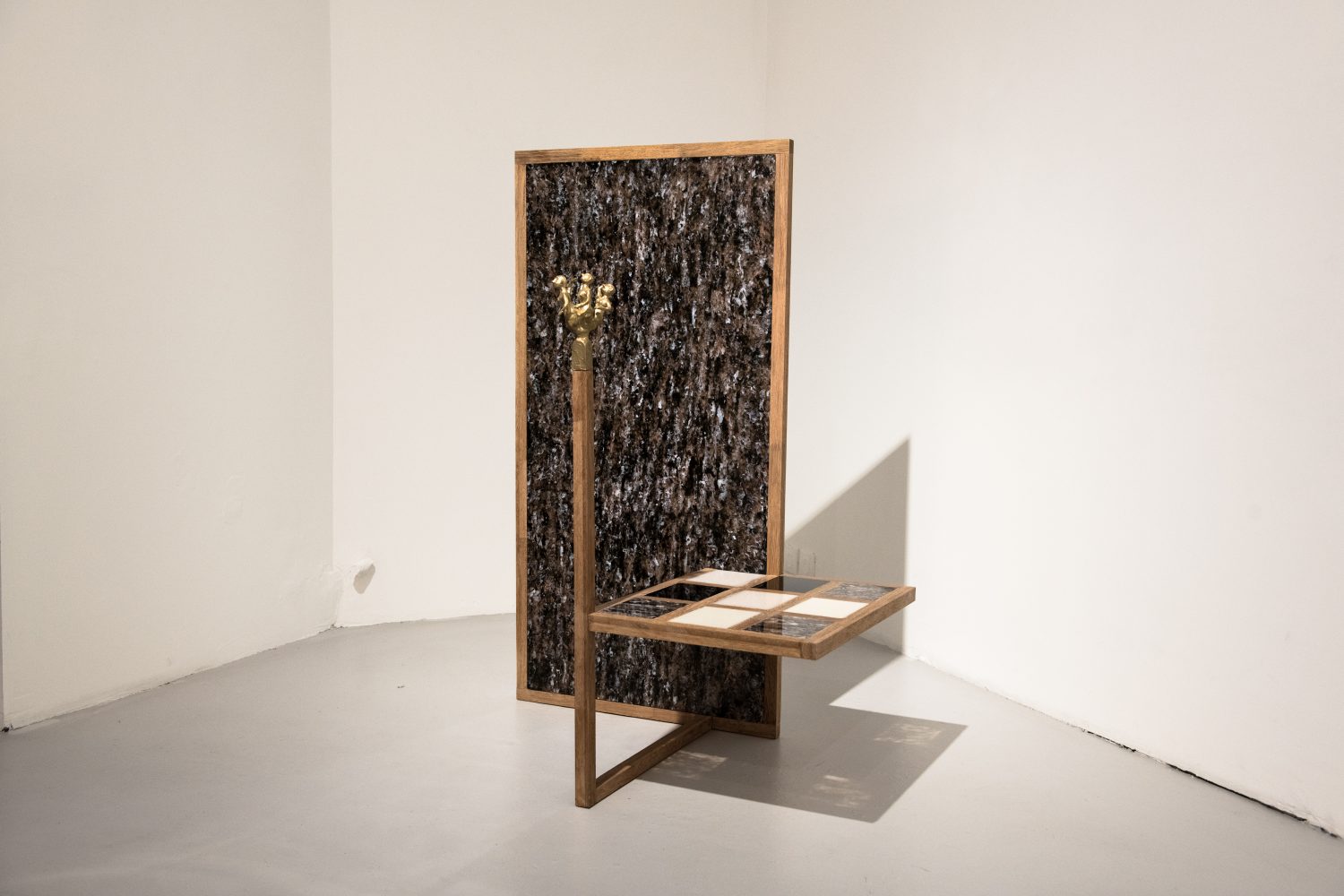 This is in harmony with your previous work, which always seems to dissect living matter…

It is a continuity of what I create in my Paris atelier, especially with my series of “Achronies.” This matrix allows me to generate several experiments with color and materials, even if I have taken a small step to the side here, in the sense that I have been interested in a certain relationship to time through catalysis. But I also wanted to create little stories about textures and different shapes.

In a previous interview, you described color as a material….

Indeed, I always use color like matter, because it gives birth to the form. I think that’s also why I was invited to this residency, because acetate is the most carnal and bewitching material from an optical point of view. We don’t want to hide it.

Can we go back to your sources of inspiration and the artists you love? One can guess the importance of modernist sculpture, such as Pablo Picasso, Henri Laurens or Alberto Giacometti, but also archaeological influences…

I am very interested in artifacts and anthropology. I observe time, how it causes materials to change, but also forms, which are themselves dependent on periods and geographies. It amuses me to open up these fields, and when I see a form that has already been manipulated by civilizations different from mine, I make it fit into my universe by transforming it through hybridization. I leave myself totally free in the assemblages. 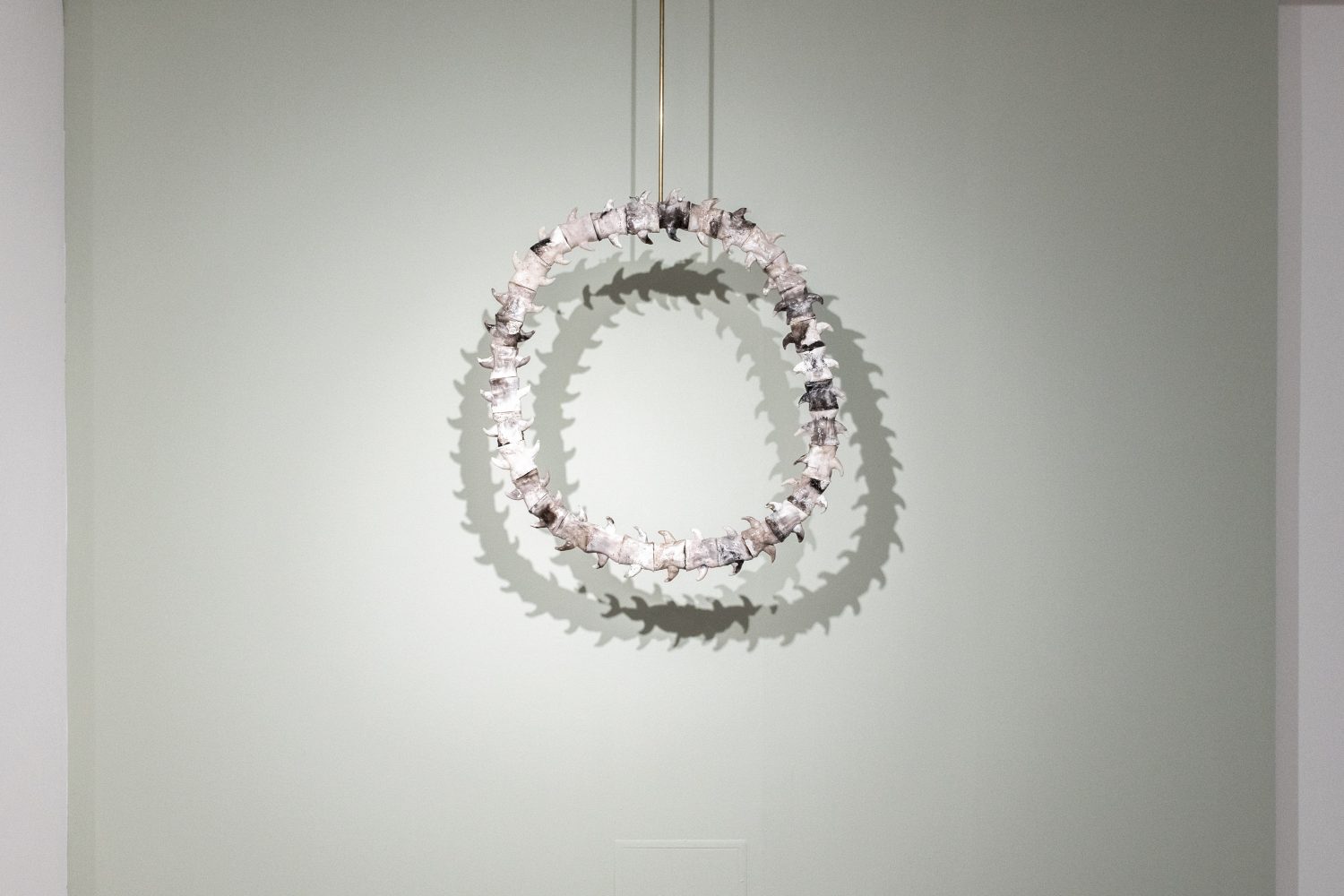 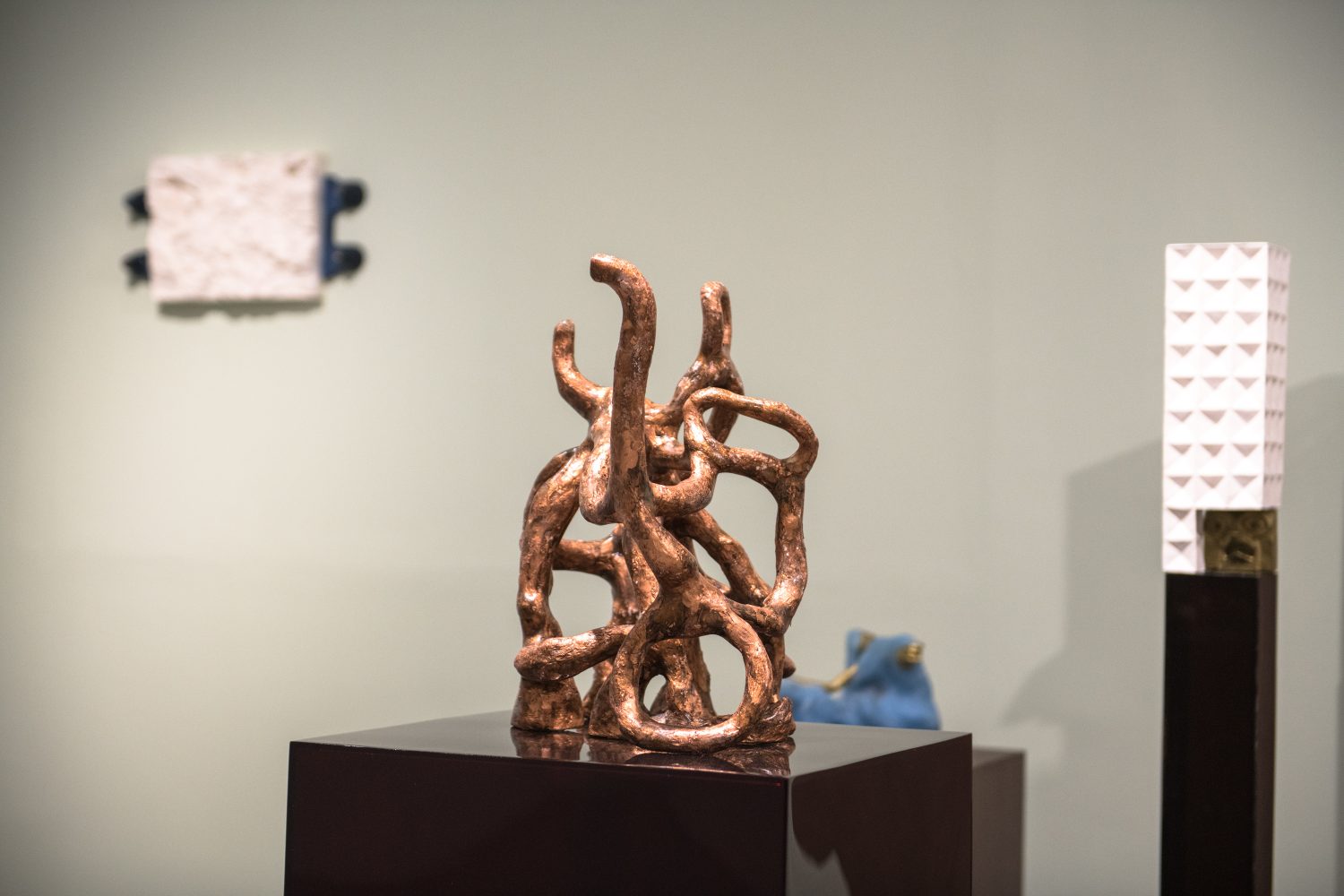 Does the object then lose its meaning to become purely formal? There are sets of lines on one of the sculptures for example, but it looks like a dog. Does the sculpture refer to the animal?

Even when we state that a work is formal, the mind always interprets… For me, the form and the way it intertwines creates the narrative, and we should not try to mask it with a story, especially when a very strong material already says plenty of things. I am interested in the essence of the form, but some stories in fact intrude, as evidenced by the works on display. For example, when I returned from a trip to Mexico, I was very moved by the representations of Xipe Totec, the deity of nature’s renewal, which I represented in the form of stratification. Then during my residency, I visited Longarone, of course, but also the city of Padua, where I discovered the Scrovegni Chapel, which has one of Giotto’s most famous fresco cycles. One of them represents Jonah swallowed by a fish and inspired me to make two intertwined elements, whose meaning comes from the entanglement of shapes. Sometimes, the interweaving is also of an intellectual nature, such as the encounter between a Celtic-Ibert artifact, representing a horse, and the Catoblépas, a mythological animal native to Ethiopia, which Jorge Luis Borges has cited. I recreate meaning through disjointed elements.

Were you influenced here by specifically Italian sources?

Absolutely, because I had the Dolomite mountains to observe on a daily basis, which never ceased to fascinate me. I went to visit all the surrounding collections, especially those located in Padua, Conegliano and Venice… Giotto filled my imagination enormously, but also Giovanni Bellini for his representation of the mountains. They nourished me like a mantra and I was fascinated by this raw, stratified rock. Its color is strange for a mountain: it can be perceived in a very immediate and milky way, and it was interesting to understand how artists from past centuries had approached it. Also, I liked the back-and-forth time between the Manifattura Thélios in Longarone and returning to my studio in Paris, where I continued to make ceramics. I regularly brought back things in my car and drove through all this rocky landscape. In addition to the relationship to time, which is very important in my studio practice, I added the temporality of the road and the observation of nature and clouds…