Mircea Cantor’s work knows no borders. Originally from Romania, he defines himself above all as an artist who “lives and works on Earth.” Winner of the Fondation Ricard Prize in 2004 and the Marcel Duchamp Prize in 2011, he has a carte blanche invitation from the Musée de la Chasse et de la Nature for the 2019 France-Romania Season, which celebrates the centenary of the foundation of modern Romania. Mircea Cantor is interested in the notion of territory, confronting humanity and animality through ancestral rites and rituals still very present in his native country. A parade of masks and popular objects from the National Museum of the Romanian Peasant were brought over to this Paris institution, resonating with his films, drawings and sculptures. He organizes all of these elements as an “image hunter” (“imagini’s vânătorul”), which will culminate with an event for the Festival of the Bear on February 21st.

The Musée de la Chasse et de la Nature has given you carte blanche. How did you approach this freedom?

When I am granted freedom, I impose constraints on myself. I think about how to act in a defined space, which public I’m addressing, which type of works and discourse to adopt in a context like that of the Musée de la Chasse et de la Nature. I have tried to develop themes related to the animal world, but I have also thought about how to insert works that are far from a ‘literal’ understanding of this animal world. The exhibition presents the film “Deeparture” from 2005, which shows the tension between two animal species that never encounter each other except to attack: the wolf and the deer. My video of an eagle and drone is also presented, which reflects the notions of territory and intrusion, which interest me a lot.

What is your definition of a “territory”?

More precisely, with regard to this exhibition, territory is a concept that is not only linked to its physicality. The masks shown here, for example, define the territory of a custom linked to rituals and community. Camouflage fabrics are, for me, conceptual representations of an idea of territory—hence the title “Hidden Meridians over Disruptive Landscape.” Using camouflage fabric means wanting to blend into the landscape, the territory. How does one define this area? 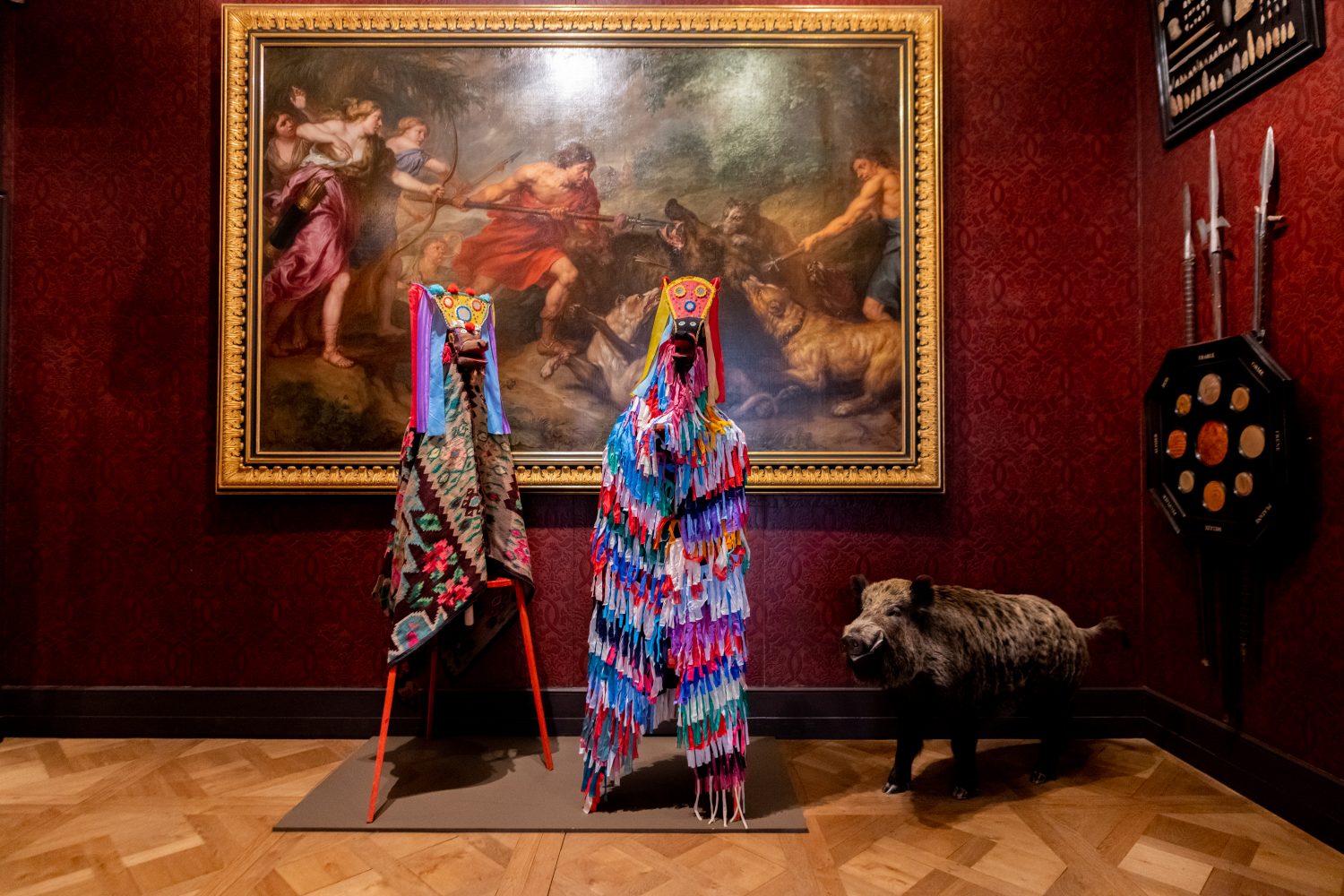 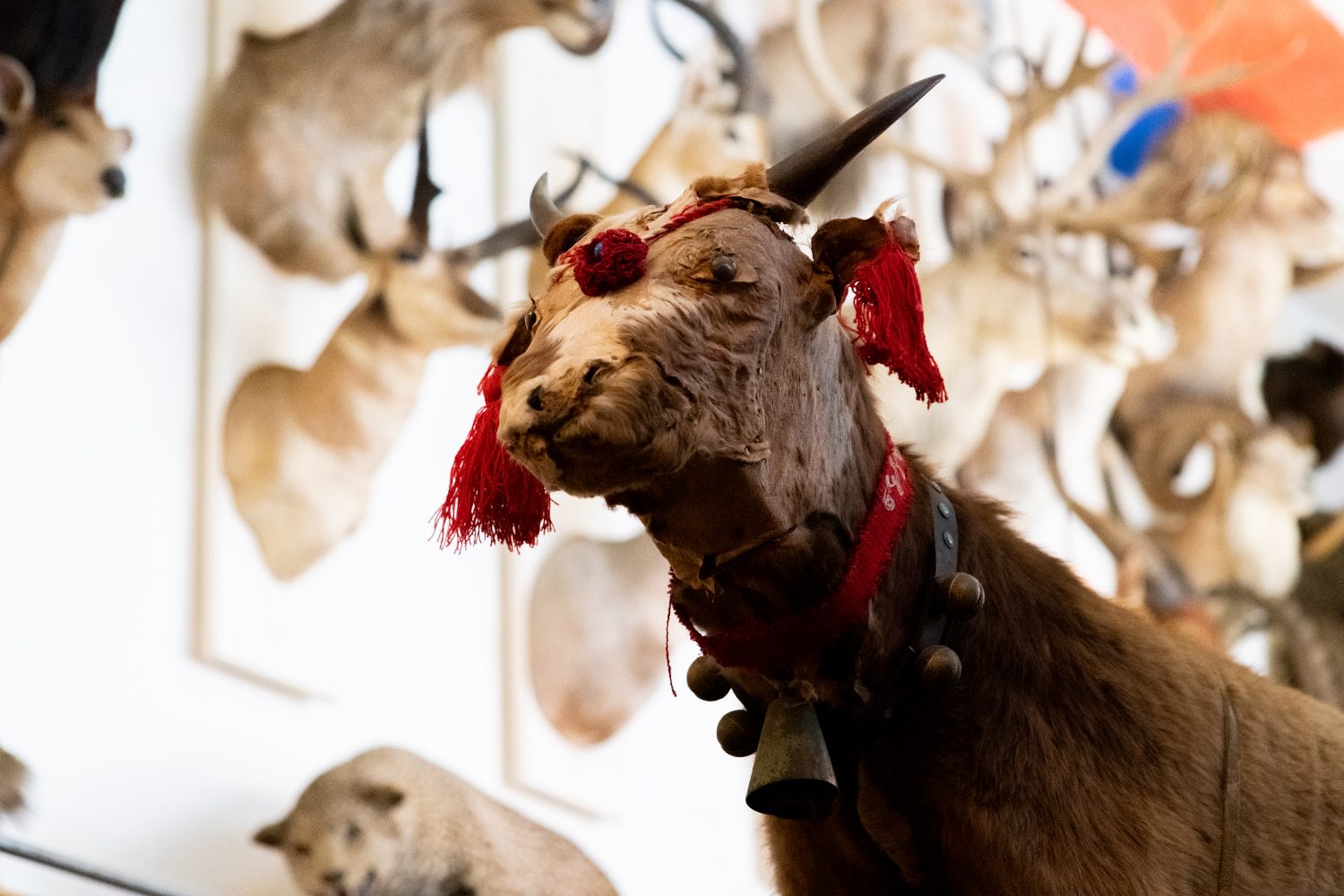 The exhibition is part of the 2019 France-Romania Season. Do you consider yourself an ambassador of Romania through art?

I don’t think you can cut your roots; otherwise, like plants, you can’t survive! It is a little exaggerated to say that I am an ambassador of Romania, but I try to highlight some aspects from there that aren’t as well-known in France. Like the masks from the National Museum of the Romanian Peasant—which are not on display even in Romania because the museum is closed! It will be a discovery for both the Parisian public and Romanians who come to see the exhibition. These masks are incredibly rare and precious. For the museum, they have the same value as the Mona Lisa. They are objects that are typically destroyed once the end-of-year rituals are over; they take place in specific ethno-geographical areas of Romania. It is a great pleasure for me to have been able to bring them to France and to exhibit them here. We will also exhibit a carpet woven in southern Romania, in the region of Oltenia, which is well-known for its carpets. It was woven for the centenary of modern Romania, that is to say the gathering of all the regions of Romania, in which France played a very important role with the Trianon Treaty.

Can you tell us about the artists you invited to participate in the exhibition?

The idea of the “Guest Room” on the second floor came to me spontaneously. Curator Claude d’Anthenaise gave me carte blanche, but I wanted to give carte blanche to other artists too. I invited the rather effervescent Cluj-Napoca scene, which focuses mainly on painting. All these artists responded to the specific theme of hunting and nature. If that had not been the case, I would have exercised my power of censorship…

How do you explain the importance of wild animals in Romanian culture?

For me, the relationship with the animal is not linked to a nationality – I would rather talk about humans and animals in general. In my case, it’s something that comes from my childhood. I grew up and always spent my holidays in the very traditional deep countryside. The pig was sacrificed at Christmas, the lamb at Easter. There was a natural relationship with the animal. I knew where the meat came from—we were far from the slice of ham you can find in the supermarket. Of course, we have moved away from that relationship, but I still have this love and respect for animals. 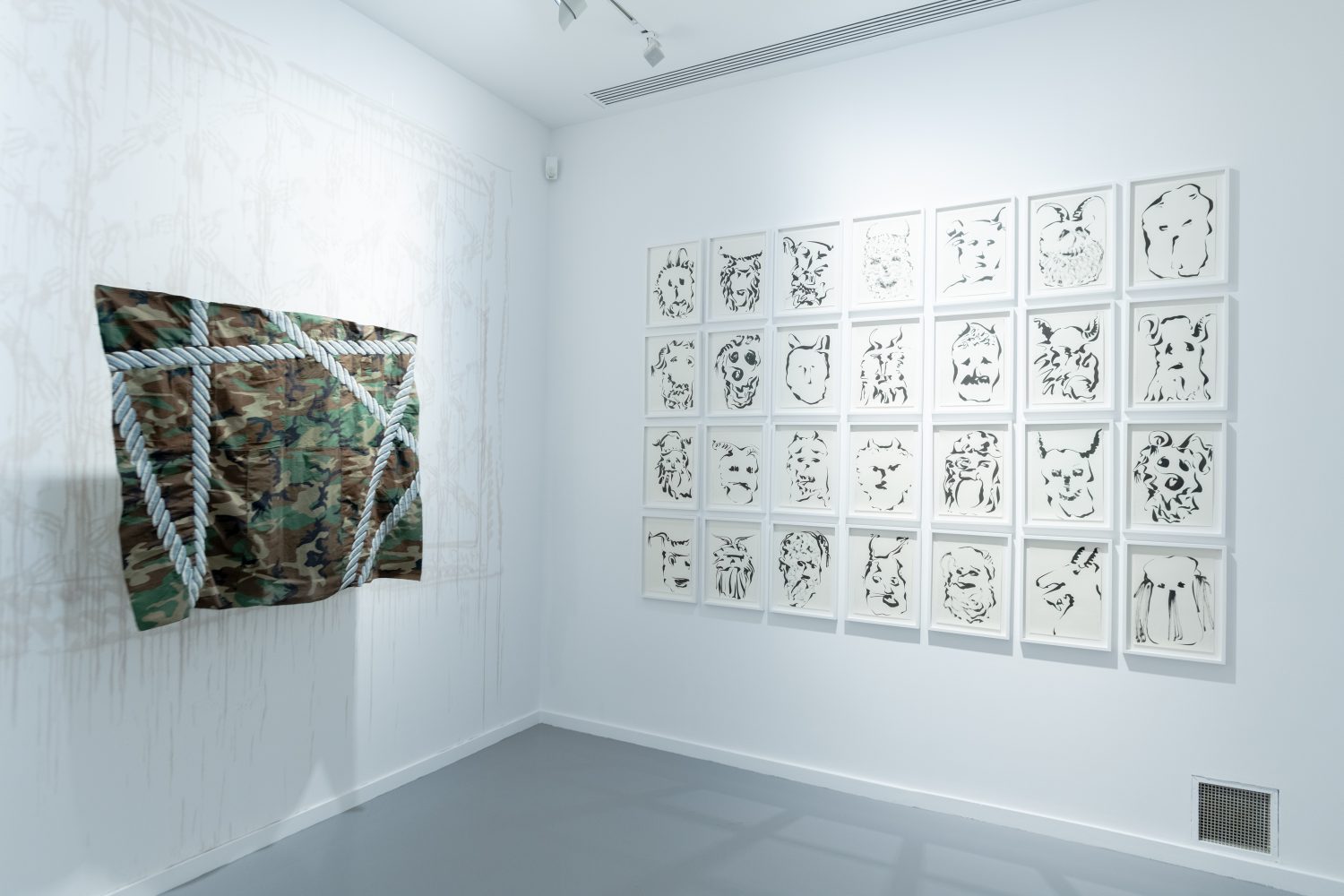 We read that you consider yourself “in permanent exile.” How do you explain this phrase?

I’m not sure I said it that way. I don’t consider myself in exile; I’m infused with the place where I live. Today, with the opportunity to travel, we can no longer consider ourselves in exile. I am not persecuted; I am free to discover. Moreover, on my CV I specify that I “live and work on Earth.” Today, we can have this universal belonging.

In your early years as an artist, were you influenced by any particular artists or approaches? You work with many different media: video, drawing, sculpture…

I had a few teachers with whom I exchanged a lot, but there is not one single artist who really influenced me. I love Lasco, Piero della Francesca, Caravaggio, as much as Paul Klee… I love and know about art history. It is through knowledge that we discover a certain authenticity that we choose to follow.

You will organize a big parade for the Festival of the Bear in February. Can you talk about the ritual, and why you wanted to reproduce it in Paris?

This is the third edition of the Festival of the Bear at the Musée de la Chasse et de la Nature. Romania is one of the European countries with the highest number of bears. It is said that these ancestral traditions linked to the Festival of the Bear date back to the time of the Dacians, the ancestors of the Romanian people. At the time, the bear was a sacred animal and was celebrated at the beginning of the New Year, so it is very much linked to these rituals of nature’s renewal. During the event, people will be dressed in masks and real bearskins, playing drums, trumpets… Never seen before! People come from the city of Comănești and celebrate this ritual every year. The tradition remains very strong, from a lineage of fathers to sons, and that is what is beautiful: this transmission. For the Parisian public who will attend, it will be a real show. 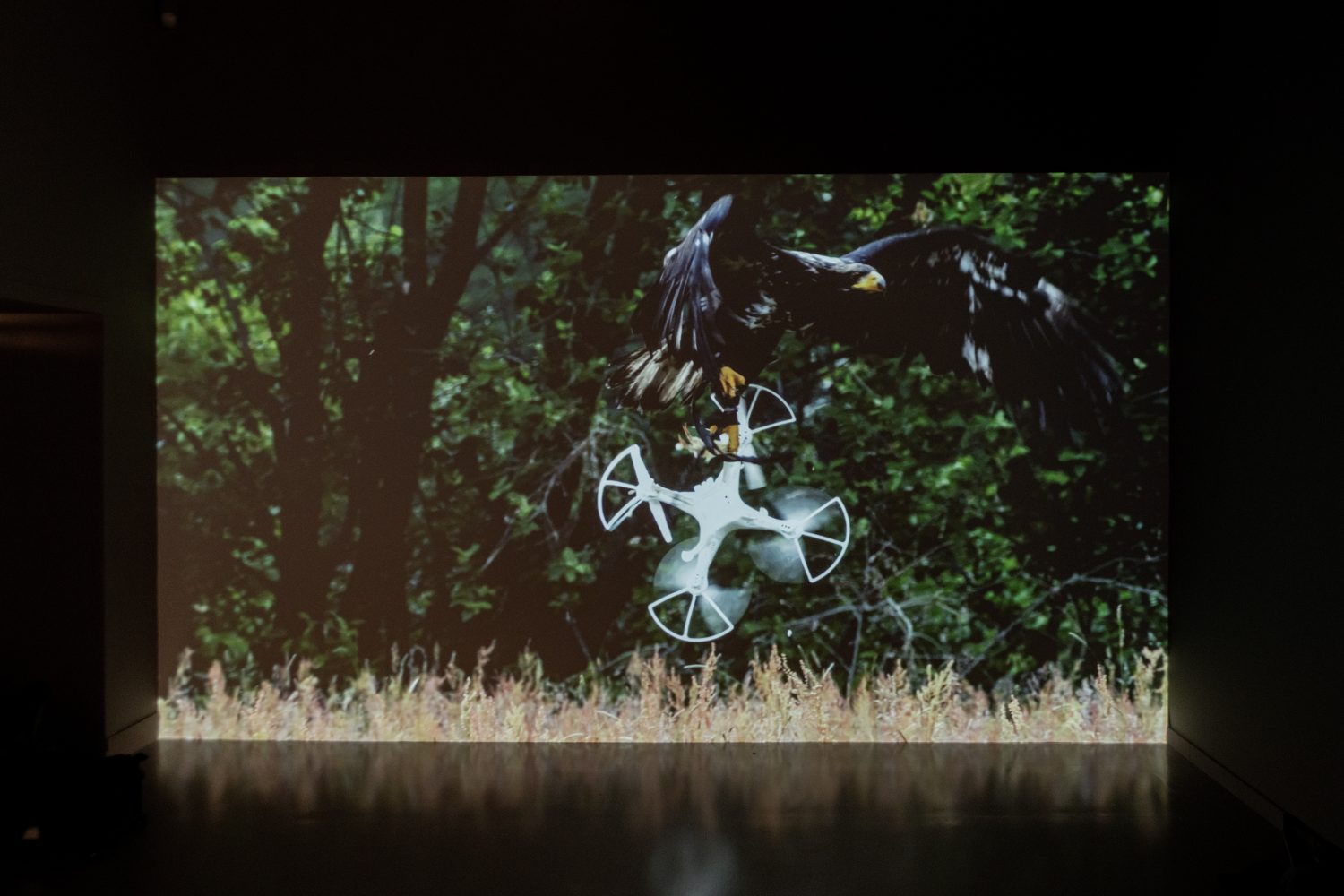 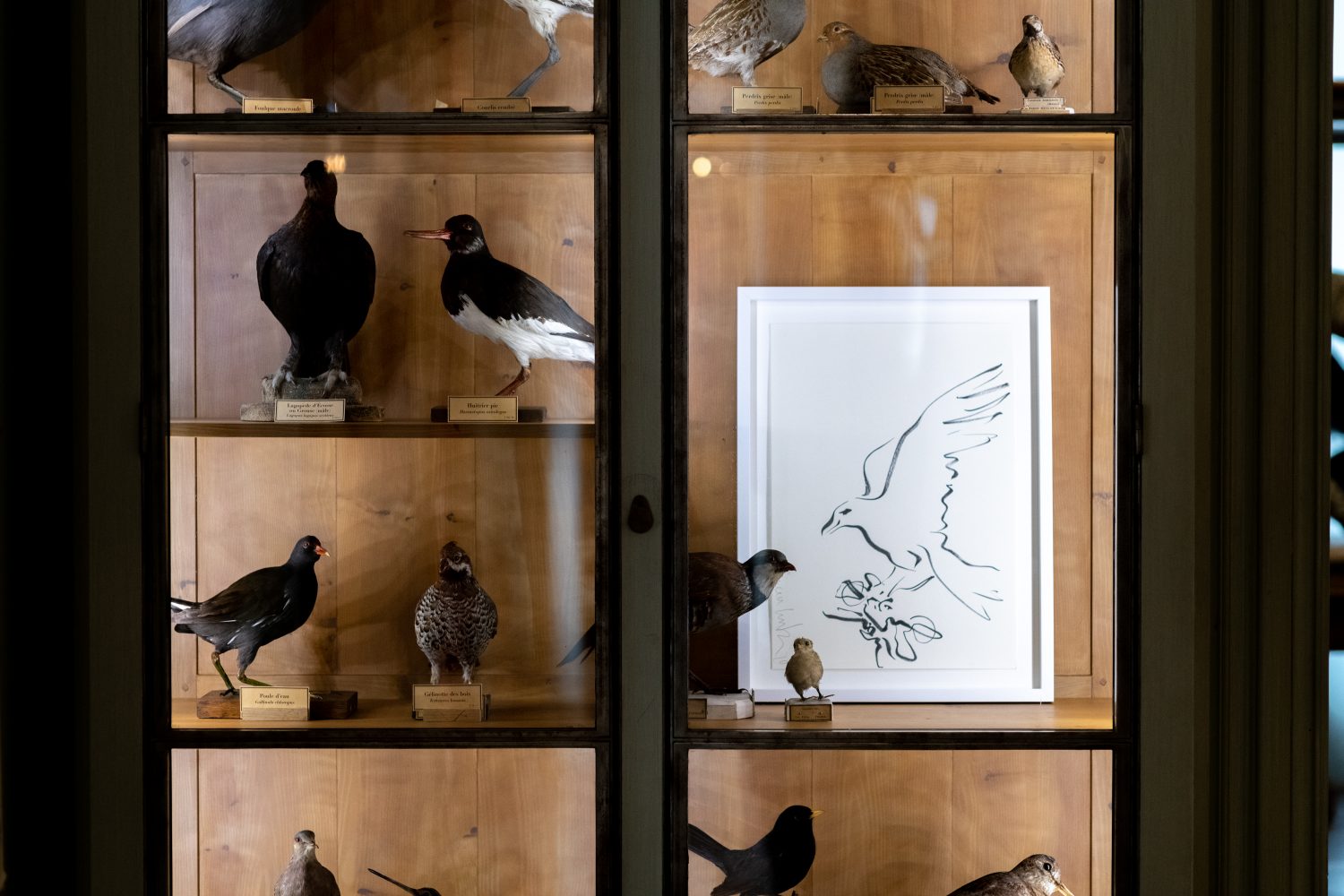 The exhibition is subtitled “image hunter.” Given the theme of territory and the animal world, do you consider yourself a hunter, an observer, or a predator?

Your film “Aquila non Capit Muscas” [The Eagle Doesn’t Hunt Flies] shows an eagle chasing a drone. Are you concerned about technology?

Maybe that’s a little over the top. Today, we all have a mobile phone that we have acquired voluntarily. The question is more about the intrusion of technology into private life, the border between the private and the public. The idea is also expressed through my barbed wire piece on display on the ground floor of the museum. Today, everyone can access people’s fingerprints, as soon as they cross the American border. It’s often under the pretext of security, but I wonder if it’s still justifiable…

Who, for you, are the predators who endanger artistic freedom today?

Art predators are everything that keeps us away from art. Art is so subjective that moving away from it can even become an art in itself: the art of moving away from art… To sum up my approach, I always say that I throw the stone in the water, and let others decipher the ripple.