Good design is not about shapes, colors or forms, but the story behind the object

Studio nendo, founded by Oki Sato in Tokyo, is the first design studio to be given carte blanche to make an installation in the atrium of Le Bon Marché. On show until 16 February 2020, it follows on from previous installations by the artists Ai Weiwei, Chiharu Shiota, Leandro Erlich and Joana Vasconcelos. Nendo’s proposal, Ame Nochi Hana, (meaning rainy and later bloomy), is composed of 120 variously sized raindrops that transform into white flowers and is programmed to move up and down at half-hourly intervals. The animated scenography is like a ballet, the shapes of the raindrops unfurling into a field of flowers. On the second floor is the multimedia installation, ‘Uncovered Skies’. Visitors are invited to walk upon an illuminated platform holding a black umbrella and see projected landscape images appearing in the umbrella’s shadow. Inspired by Japanese scroll paintings, it was first shown at Suntory Museum of Art in Tokyo last year and modified for Le Bon Marché. Part of nendo’s ‘Rain Bottle’ project is also on view. Conceived for Maison & Objet in 2014, it is inspired by the many different words for rain in the Japanese vocabulary. Born in Toronto in 1977, Sato gained an MA in Architecture from Waseda University in Tokyo and established nendo in 2002. Working across industrial, collectible and interior design projects, nendo is known for its elegance, lightness, deceptive simplicity and way of evoking nature.

What was the starting point for Ame Nochi Hana?

There was no brief except to use the color white because it’s the White Month [until 4 February] – a sale for white household products, like linen and plates, that’s intended to reset people’s minds to start the new year after Christmas. How I could reset people’s feelings became the starting point and this was when I came up with the idea of droplets and flowers. The droplets represent tears and rain and sadness, and the flowers represent the total opposite – joy, happiness, life. I felt these two positive and negative emotions are like two sides of the coin, like light and shadow. I thought it made sense to show an animation switching from one emotion to the other, back and forth, so I could propose a new way of seeing the bright side of life and present people’s emotions.

Did any particular landscape inspire you?

These pieces are inspired by nature and by Japanese design, which heeds the respect for nature, but not a specific site or place. I tend to use nature almost as a tool, symbol or visual language – it’s a way of connecting and creating a link with people and my designs. Flowers, raindrops, clouds, skies and trees are things that everyone from different cultural backgrounds understands. 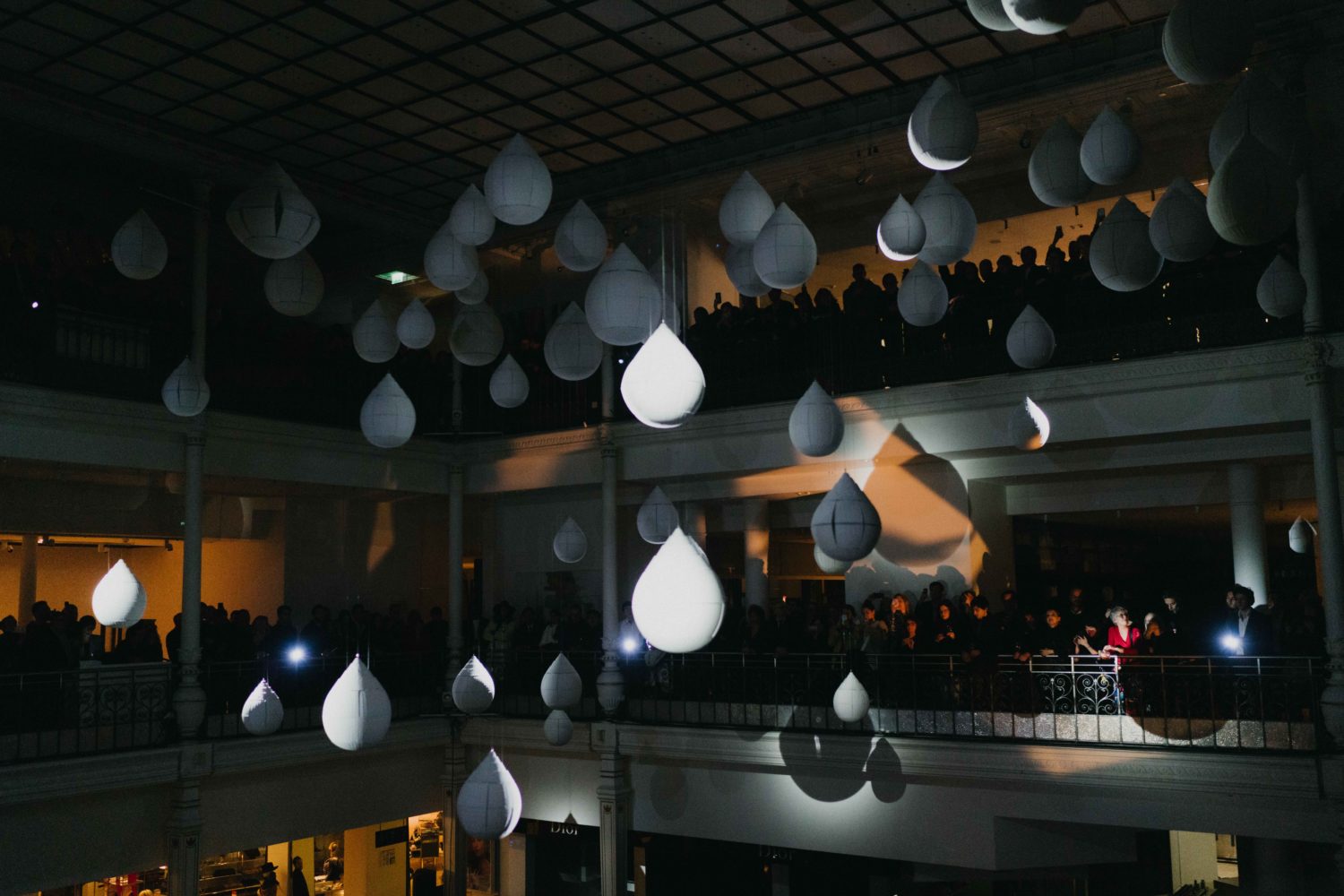 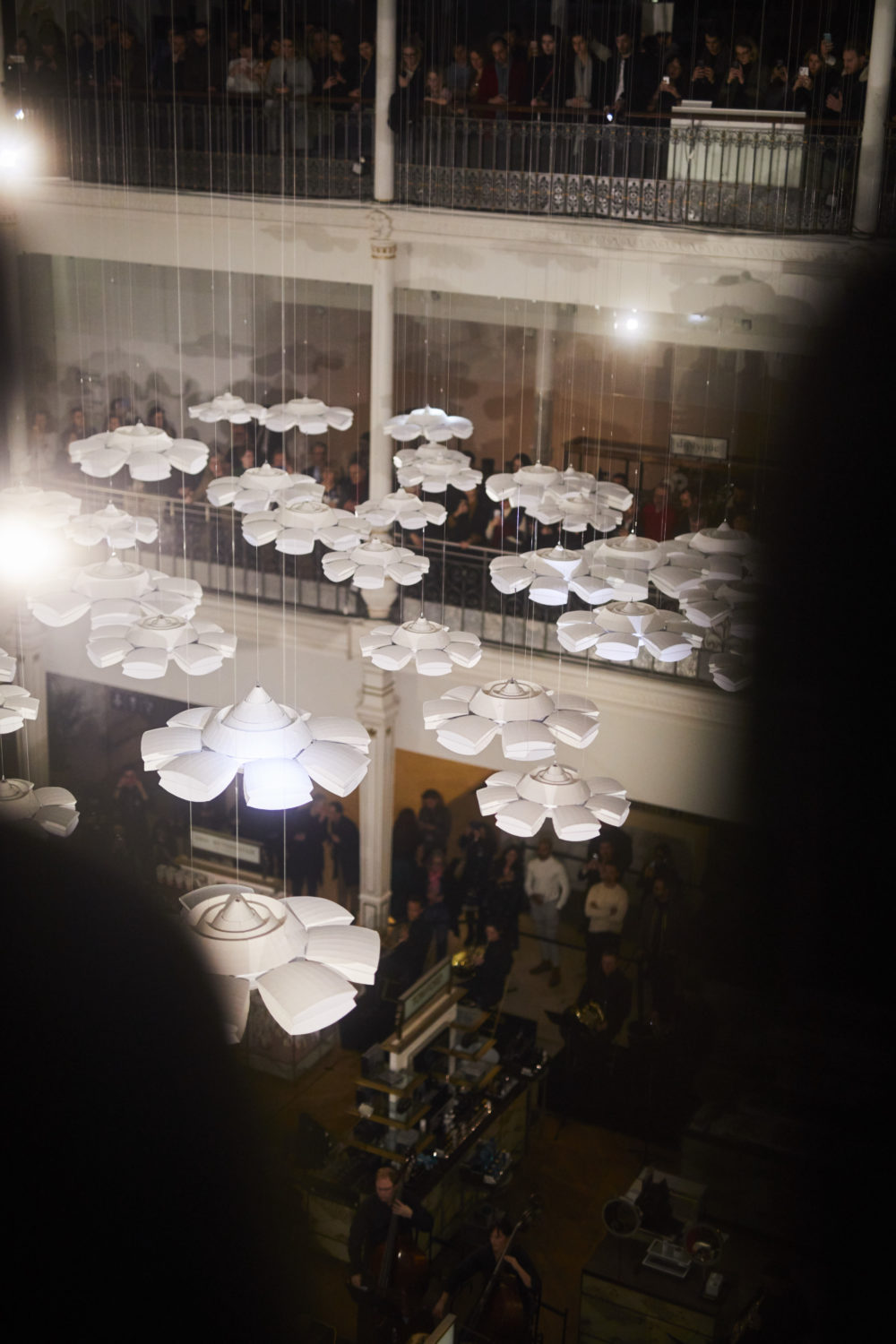 How did you conceive the transformation of the flowers into droplets and the animation moving up and down?

We tried to make a structure for the atrium that had to be well balanced because it’s mid-air. It’s almost like a marionette with three wires. When you pull the wire in the middle, it becomes a teardrop. When you pull the two on the side, it becomes the flower. And when you pull all three, you move the entire object up and down. The movements of the 120 raindrops had to look random and different when they fall on the ground and become like a blanket of flowers. After doing a lot of simulation using computer renderings and tests in Japan, we did a full-scale mock-up at the Milan exhibition site just before Christmas. It’s very technical but I wanted it look more natural and emotional. All our projects look very simple and easy and when we do our first presentations to our clients, they say: ‘Oh, this looks nice and easy to make.’ But when they start to make prototypes, they notice that the easy ideas are the most difficult to produce.

‘Uncovered Skies’ invites visitors to hold a black umbrella, covered with a polarizing film, that enables projected landscape images to appear in its shadow. How did the idea develop?

We were breaking a movie projector in our studio to see how it worked. When we took the polarizing film out, the movie disappeared and became a spotlight. But when we placed the polarizing film in between the surface and the lens, the movie came back. This gave me the idea of having an umbrella, walking in the spotlight and the video arriving in the shadow. We changed the video entirely [from the first iteration at the Suntory Museum of Art] and worked on the pavement and reflections in the City of Paris, adding more elements related to rain and flowers.

In 2008, you designed the ‘Cabbage Chair’, made from pleated paper, for the XXIst Century Man exhibition that Issey Miyake curated in Tokyo and you have since designed two stores for him in Tokyo. What did you learn from him about the role of a designer?

Mr Miyake told me 10 years ago that the big difference between an artist and a designer is that it’s OK for an artist to deliver all sorts of emotions, like sadness, anger or fear. But if you’re a designer, you have to deliver happiness. I feel that the similarity between the designer and the artist is that they are allowed to deliver joy and happiness between people. It’s about telling people how to see things in a different way, making life rich and interesting and trying to enjoy everyday life. It’s important as a designer not to fear or avoid problems but to try to challenge them. I enjoy everything, whether it’s a success or a problem, and all these things become a part of me. 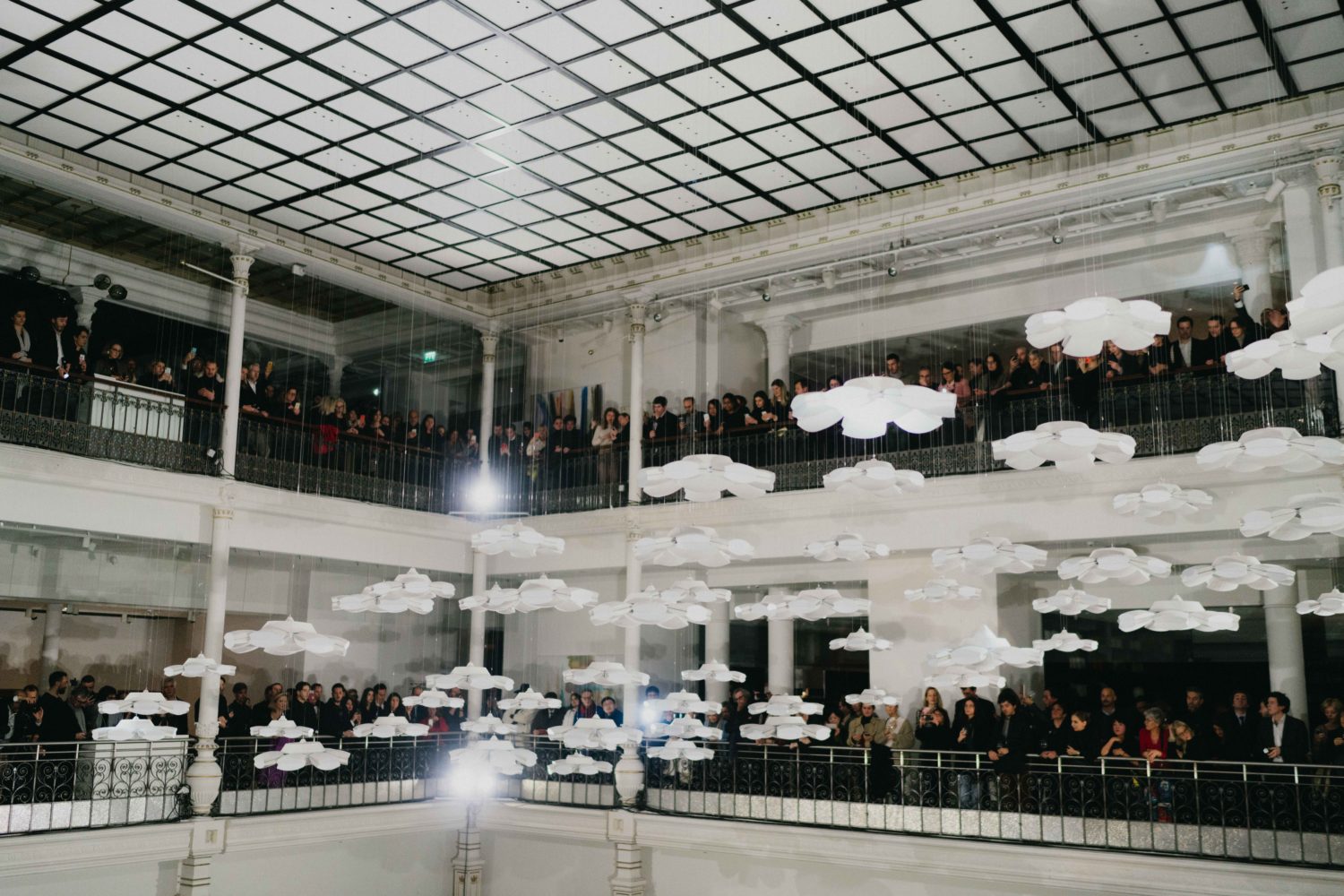 How would you describe your philosophy and define good design?

Lightness and simplicity are very important but the basic philosophy is about it being functional. I like the word ‘functional’ because it contains the word ‘fun’. As well as having a certain function, something has to have this emotional element that connects people with other people, space or objects. Especially in Japanese design where things become minimal and cold sometimes, people can be afraid of the object. A little bit of humour or a pinch of surprise are like spice for food and create the link. I want to make something that’s easy for even small kids or people with no knowledge of design to understand. If you could explain something to your mother or a small child on the phone and they got excited, that’s good design. It’s not about shapes, colors or forms, but the story behind the object.

What are you planning to exhibit during the Milan furniture fair in April?

I think we’ll show a small exhibition at the showroom of Capellini, the Italian furniture company, which we’ve worked with since 2003. It’ll be like a retrospective of all the pieces that we’ve designed for Capellini in the past 18 years with something interactive, like ‘Uncovered Skies’, playing with light and shadow and shedding light on the collaboration.