Nowadays, you only see images in the city when they are meant for advertising

At a time when social distancing is harming the cultural sector tremendously, Olivier Saillard is not about to give up providing access to culture for all. Faced with the cancellation of the Rencontres d’Arles 2020, the famous art historian and his partner Gaël Mamine have imagined a street exhibition with to the support of fifteen photographer friends. Since the beginning of July, “Les Images Perdues” has transformed the city of Arles into an open-air museum with a display of photographs by big names such as Paolo Roversi, Sarah Moon, Jean-Baptiste Mondino or young talents of contemporary photography. Subject to the test of time and sometimes even to human action, the exhibition invites the visitor to reflect on the over-consumption of images through a poetic itinerary. For Olivier Saillard, who is accustomed to performances at the Palais de Tokyo and exhibitions at the Azzedine Alaïa Foundation (of which he is the director), this is also the very first project in the public space. From his home of fifteen years in Arles, Olivier Saillard talks about our relationship to images, poetry, and new ways to show art.

How did you get the idea for this exhibition, “Les Images Perdues”?

It was a very spontaneous decision. A few years ago, we founded Cellules Archives with my partner Gaël Mamine. It is a company that provides support in fashion archives. We spend a lot of time in Arles, and we know the city well. When we learned that in Arles, as elsewhere, many cultural events had been cancelled in reaction to the Covid-19 pandemic, I was a bit perplexed only because I knew museums were reopening – and this was something I fought for at the Azzedine Alaïa Foundation. I think culture should not only be there for the masses who are not able to come anymore, but also for the people who live there. I thought cultural deciders all over France were hiding behind the excuse of a financial deficit. In my opinion, culture should sometimes be accessible for free, quite simply. The idea came as something that would be said at a dinner conversation. I thought we could ask our photographer friends to lend us an image that we would print on a large poster format to show in the streets. I started by calling Jean-Baptiste Mondino, who didn’t hesitate for a second, then Sarah Moon, Dominique Issermann, Paolo Roversi. They all said “yes”. After that, the project was on! 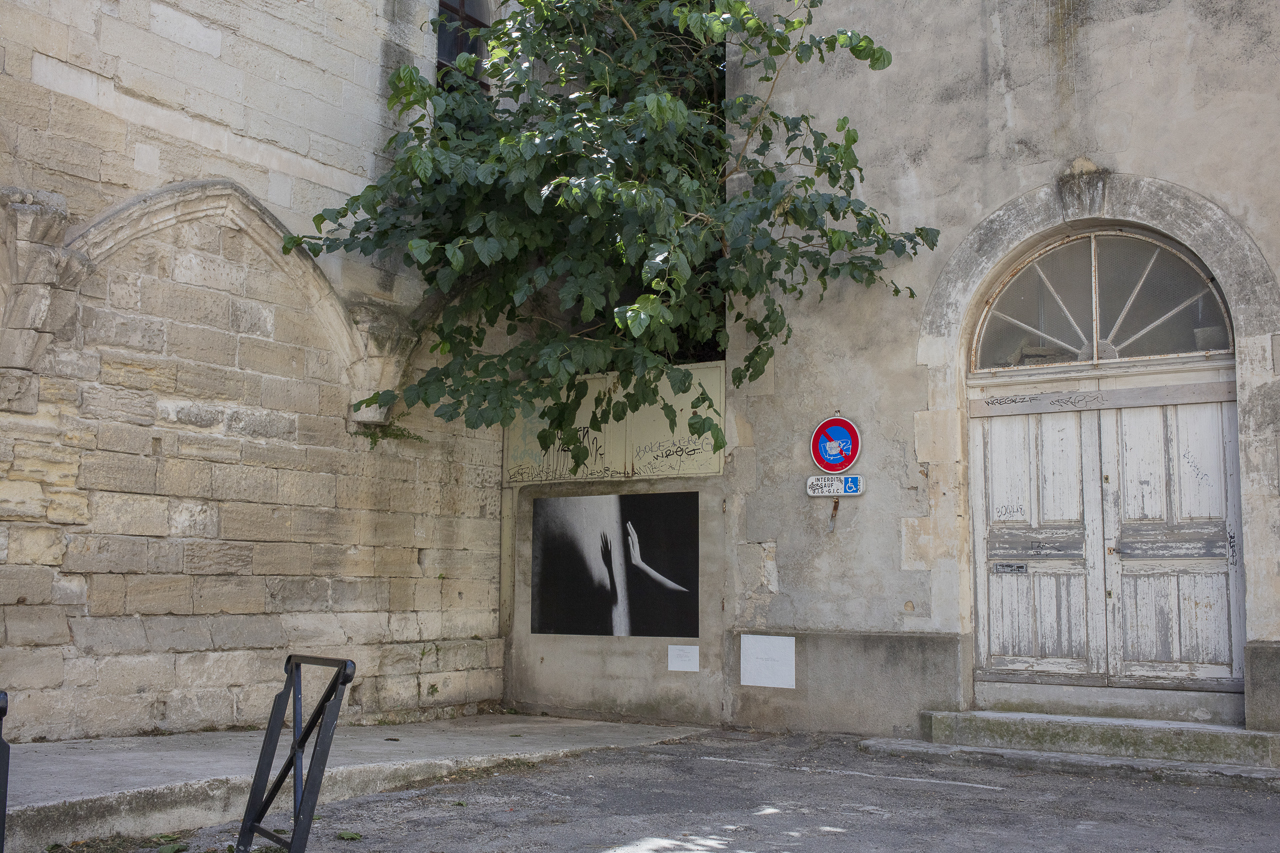 Can you tell us more about the exhibition?

It’s an open-air exhibition, so you don’t have to think about social distancing too much. I asked the photographers to find “lost images” that would be scattered around the city. It could be images lost from their memory, lost from a series… The word “lost” takes several meanings here. Once I got an idea of what the exhibition would cost in terms of overall budget – and realized it was totally reasonable – I decided to produce it myself with the help of students in Arles.

What does this theme of “lost images” mean to you?

I find that at a time when there are too many images everywhere, especially on our phones, images that are lost in the city invite you to take a more poetic stroll. These images printed on large formats give photographers another medium, in particular for the younger artists like Senta Simond and Sara Imloul. All of a sudden, the city walls become picture rails, and it gives another dimension to photography, which is neither a gallery nor a magazine. The most beautiful discoveries are made in the lost corners of the city, such as a striking portrait of Naomi Campbell by Peter Lindbergh in the district of La Roquette. With this, the images bear a kind of loneliness, whereas in our phones they appear to suffocate.

Did you think of an itinerary when you imagined the exhibition?

We thought about it. Displaying the photographs in the city was a great exercise: we could be very well received in one corner and face a few hurdles some others. Some places we obtained permits for, but it wasn’t always the case, so we had to improvise. We got to realize that people can be very rude sometimes… It gives humanity a little bit of a kick. A few photos – four in total – were damaged and had to be replaced, so the initial itinerary changed a bit. The photographers liked the idea that their photos could fade, endure the ravages of time and weather, and everyone – in particular of Sarah Moon and Paolo Roversi – liked the idea that the image would disappear by itself over time. 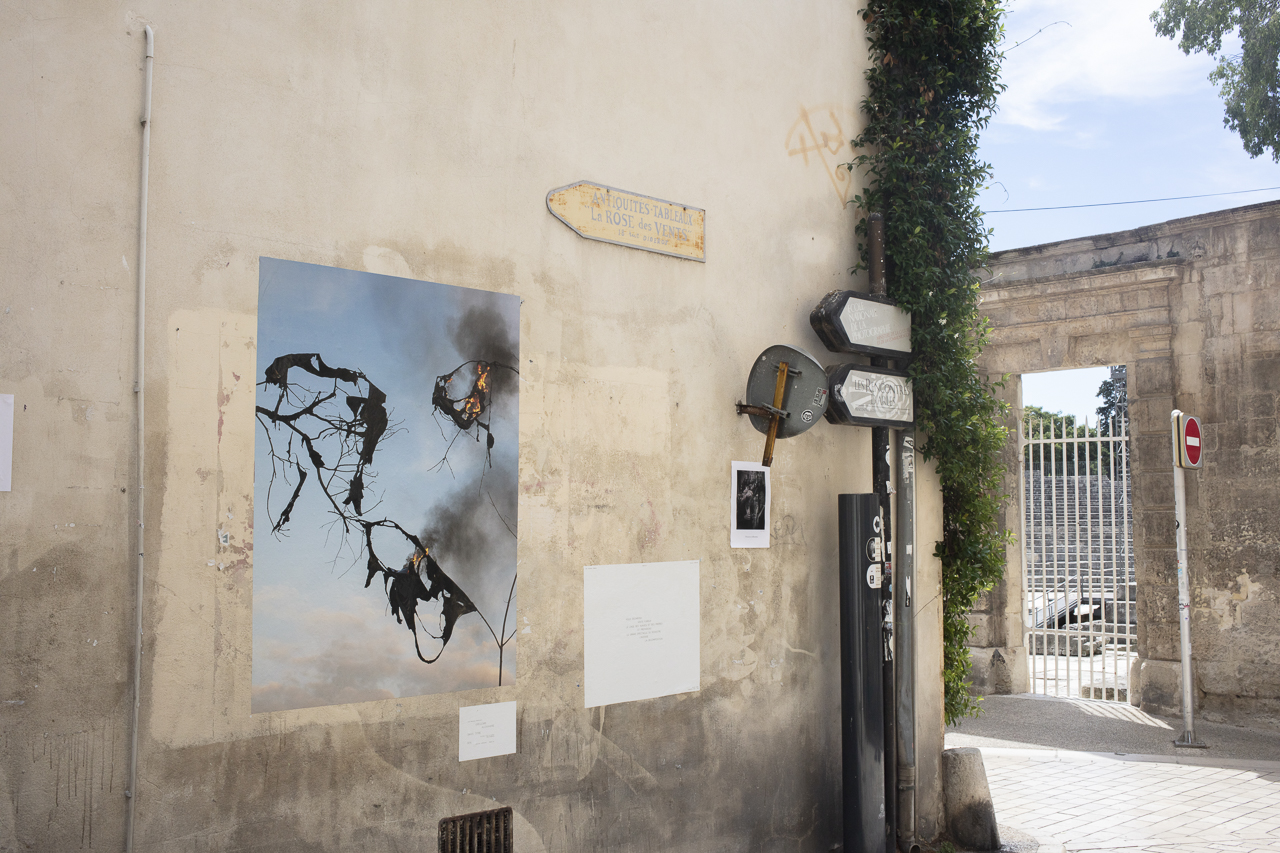 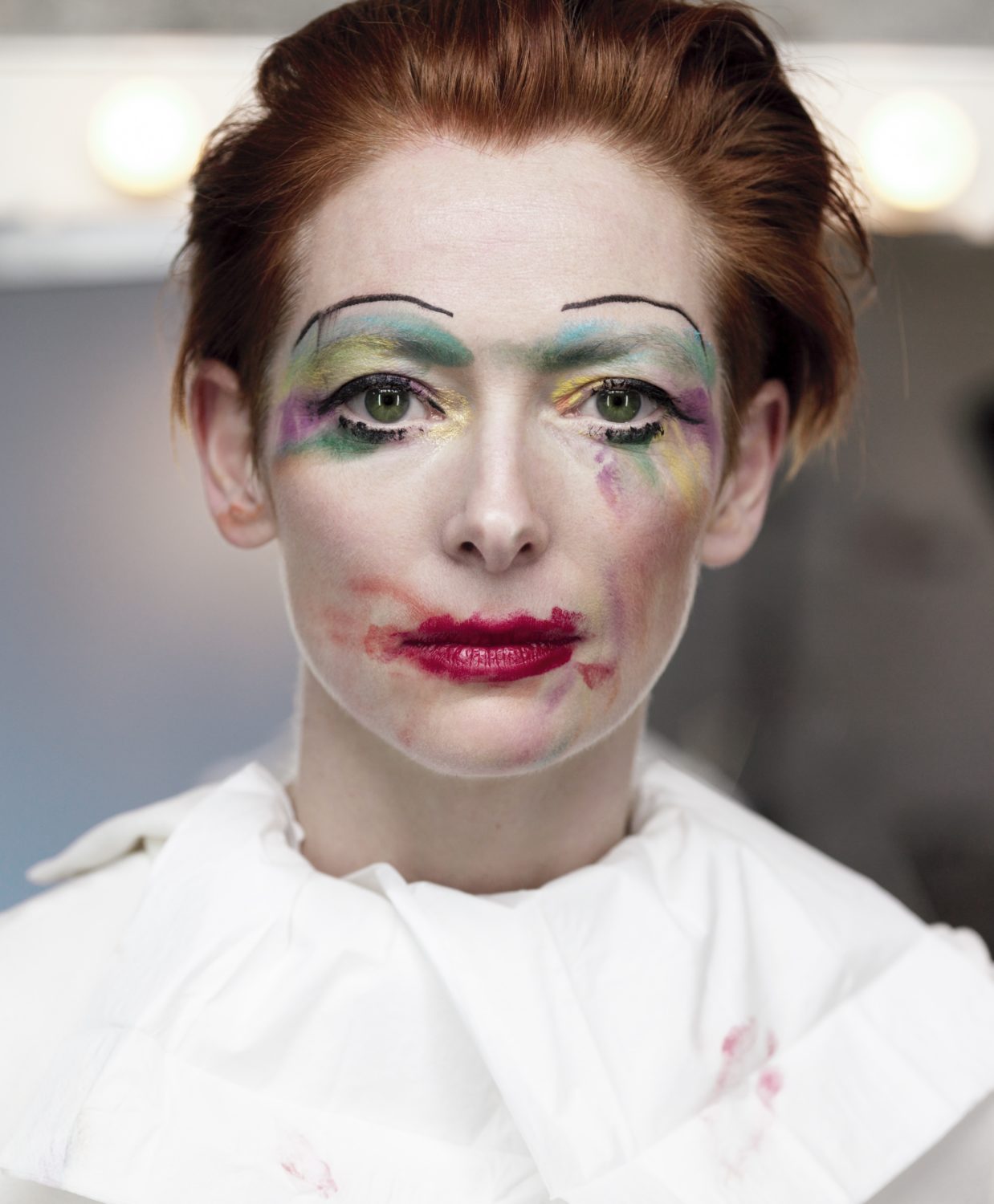 How many images did you put together in total?

About twenty-five. It was very freeing for me to create an exhibition without an institution, just as a citizen’s initiative – even if I use this term cautiously. We were all able to do it together, and it made me want to continue. It’s a freer approach. Next to each photo, I added poems by different authors to create a dialogue.

Text is very important in your work, what is its place in this exhibition?

I liked the idea to associate poems with images. I thought it added a form of poetry to the exhibition. Next to the image of Dominique Issermann is a beautiful poem by Pierre Reverdy. At the time of the hanging, I recalled all these moments of arte povera in Turin when people put up posters in the city, and I wanted to get back to that: to simple and poor things. The poems often refer to images, text always carries an image within itself. Nowadays, you only see images in the city when they are meant for advertising, and images are becoming commonplace again. With this, I want to make us appreciate images again.

Your approach to the exhibition format has always been performative. Has “Les Images Perdues” inspired new ways of exhibiting, other than the museum?

Absolutely. I believe we can find other ways to show art without being subject to the financial aspect, be it in a museum, a gallery or another art space. Otherwise we’re not going to be able to do anything. I think we’re entering a more “baba cool” era, and I like “baba cool” way better than the “posh” ones. I think we’re going to go back to something a little bit more collaborative, a little less money-driven – and that’s where we’re most inventive. In that context I was delighted to ask the question of hanging a poster on a wall next to a letterbox or a street lamp. It’s an exhibition in any case, an open-air museum. Anyone can see it, accept it or refuse it. It’s interesting as an institution director to get back to the reality of the streets.

Would you see yourself reproducing this kind of exhibition in Paris?

I would like to, but perhaps not immediately in Paris. I would like to continue in other cities, maybe in another format, to go to the suburbs without being too literal – I really like the MAC VAL. In Italy, I would love to do it in Florence, for example. In Paris itself, I would like to do a poetry poster campaign, but it’s a big city, so it’s difficult to identify the right places.

Is there a deliberate relationship with fashion in the photos you’ve selected? 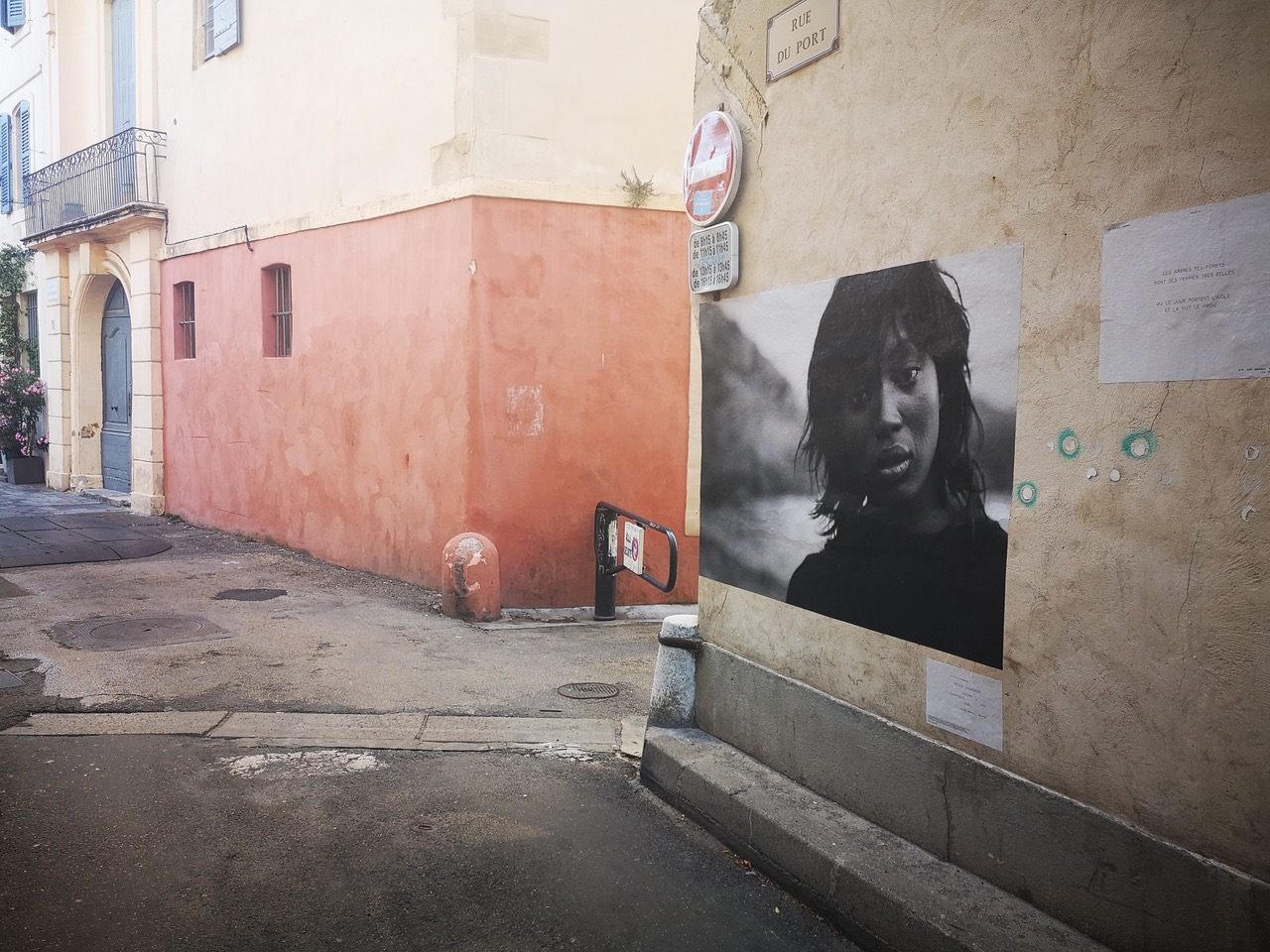 At J.M. Weston, your official title is Artistic, Image and Culture Director. What does that mean to you?

J.M. Weston was founded in 1891, so you can evoke history, human heritage, history within history with this brand, rather than always talking about the future. Right now that future’s got a bit of a headache. On the image department, I try to introduce new practices, I would like us to go even further. We get to do interesting things, especially with performances. I consider the brand a bit like an institution, and I promote it like a museum. What I would like to do now is to invite photographers, for example from the École nationale supérieure de la photographie in Arles, to work for six months for J.M. Weston and take charge of the whole image. And then invite another one for the next six months. We recently introduced a new offer of vintage shoes, which is great. I would also like us to have this sustainable behavior with the images.

How did you experience the lockdown and having to take a forced break from work?

I was a bit reluctant to the lockdown, and I was happy to return immediately to work at the Azzedine Alaïa Foundation. It’s still a little early to learn the lessons of that period. All these people who suddenly became philosophers, artists, authors because they’ve had two months off in their secondary home far from Paris, I find it a bit indecent for all those who were stuck in Paris in small spaces. Anyone who is not afraid of solitude can be in tune with himself. The Covid-19 is one thing, but the virus of overproduction (of events, books, films…) has been around for ten years. It had to blow up someday, but I’m not completely sure it’s ever going to stop. I don’t think we should be forced to discover life through a dramatic event like this. We have to be careful.

What are your next plans?

I’m trying to think of some kind of fashion biennial for September, during Fashion Week. We’ve seen that everything that’s been done to replace digital fashion shows didn’t quite stick with everybody. I think people still want to be in front of people, objects, reality. I’ve been thinking about the possibility of doing this biennial in a few selected places in Paris. I’m working on a project for J.M. Weston, a sort of exhibition of the brand’s incredible craftsmanship. In Florence I am continuing a mission for the Pitti Uomo, probably also outdoors. For the Azzedine Alaïa Foundation, there will also be a new display in September, still on the same theme “Alaïa and Balenciaga”.