“All the works are contextual, nothing is there by chance.”

“INVADER WAS HERE” and it is true: Invader is kind of everywhere. But believe it or not, until now the artist we all know (without ever having seen his face) for the pixelated ceramics he plasters in cities all over the world had only invaded the city of Marseille twice. It was successively in 2004 and 2014, and only about ten pieces had been installed. Today, thanks to an exhibition at Ora-Ïto’s MAMO, Marseille becomes the second most “invaded” city by the artist. Nearly a hundred works are scattered from the Saint-Charles district to the Corniche Kennedy to the Cité Radieuse, home of the art center since 2013. At a time when Covid-19 has restricted access to museums and galleries, this eighth summer carte blanche at the MAMO could not be more appropriate. Invader succeeds Xavier Veilhan, Daniel Buren, Dan Graham or more recently Alex Israel and stands out from his colleagues by making the terrace of Le Corbusier’s Cité Radieuse the headquarters of this invasion-like exhibition. The perfect timing for the social distancing days, yet the idea wasn’t born yesterday…

Invader and you go a long way. How did this exhibition come about?

We’ve known each other for 22 years, but at the time I couldn’t imagine that he would ever show his work in my art center. I was twenty years old when we met! Our first article together was in CRASH in September 1998. We’ve been talking about this project for a very long time, invading Marseille through an exhibition at the MAMO. We had the idea of creating this duality between the exhibition and the invasion operated from the MAMO. The installation is seen through blinders to stay in the spirit of a “secret base”. And like in a peep show, one can look through the whole device that Invader has put in place: the equipment, the ladders, the glues… It had never been done before and it’s really very interesting because the installation allows us to understand Invader’s approach, thanks to all the tools he developed to be able to climb very high and invade cities. That’s his modus operandi.

The exhibition was officially inaugurated on August 28th at the MAMO, but you could already see Invader’s work all over Marseille for the past few weeks…

Very secretly, Invader has transformed the MAMO into a workshop over the last two months. It became his HQ to create the pieces for the exhibition and invade the city of Marseille. Part of the pieces were created here, the other in his Parisian workshop. He has invaded the city with 86 additional pieces, bringing the total number of pieces to 97, including those he had installed between 2004 and 2014. Invader always plasters works wherever he goes, but to this day it is the biggest invasion of Marseille, making it the second most invaded city after Paris. 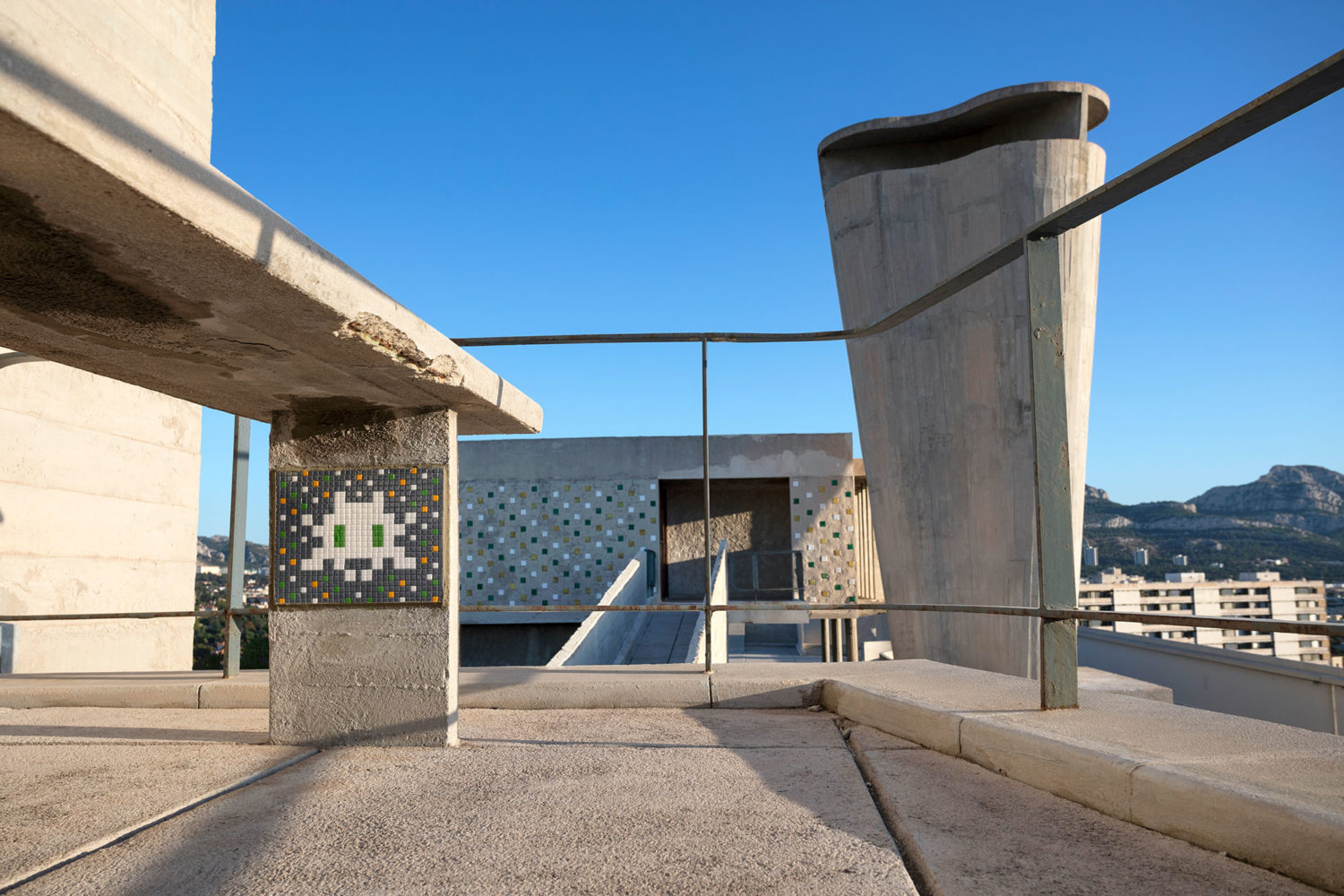 So this is the realization of a longstanding project!

Yes, we’ve been talking about it for a long time, but to tell the truth, because of the Covid-19 I hadn’t considered opening an exhibition. All the exhibitions at the MAMO since the beginning, with Xavier Veilhan, Daniel Buren, Dan Graham, Felice Varini, Jean Pierre Raynaud, Olivier Mosset, and Alex Israel have been created especially for the place. They are always in situ exhibitions, which requires large productions. Obviously the situation was more complicated this year, so it was really the right time to invite Invader. He worked day and night – he always operates at night, between 2 and 5 a.m. – for three months, and he accomplished an almost impossible task. Even the “flashers” can’t figure out how he was able to plaster that many pieces all at once in such limited time!

Invader seems to be the perfect artist for this period when access to cultural venues is restricted. The exhibition takes on a whole new dimension. Was it also an opportunity for you to give back the access to culture at a time when it is threatened?

Of course, and this has been my work since the beginning in Marseille. It’s in the continuity of what I’ve been doing, except that this exhibition is taking on a new dimension in the city, and that’s even more interesting for me. I’m proud of this operation, the people of Marseille are happy and 1,200 “flashers” made the trip over here. It’s huge!

How were the places to be invaded chosen? Was it the result of a common reflection?

All the works are contextual, there is always a relationship with the place where they are plastered, nothing is there by chance. We stayed within the philosophy of the MAMO. I worked with him on the selection of the locations and since the project was done quickly, I gave him an informed eye on the city. I took him everywhere! He also put together a map to make sure he was really present everywhere in the city. Hence the scale of the project. I think it takes more than a day to go and see all the works. 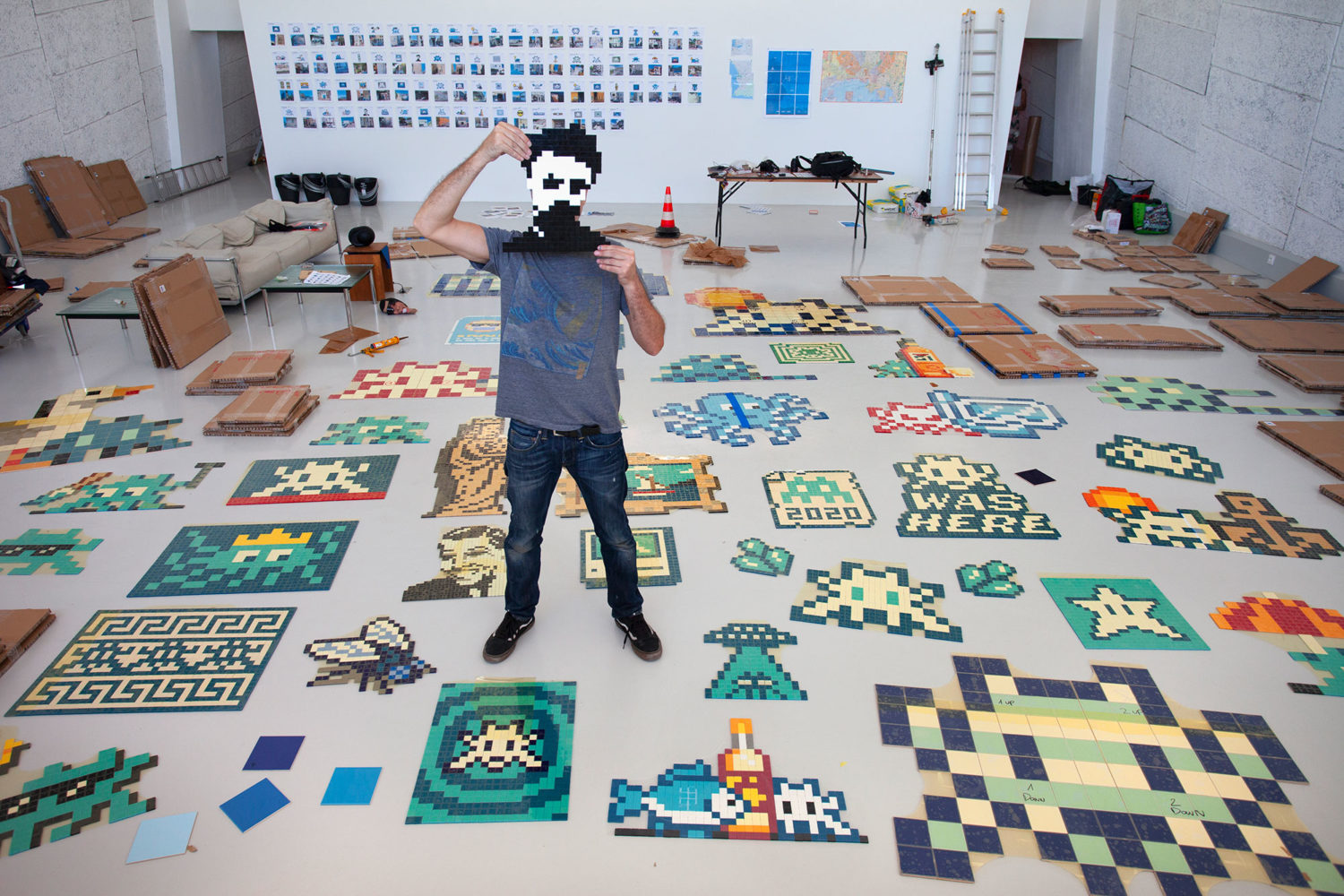 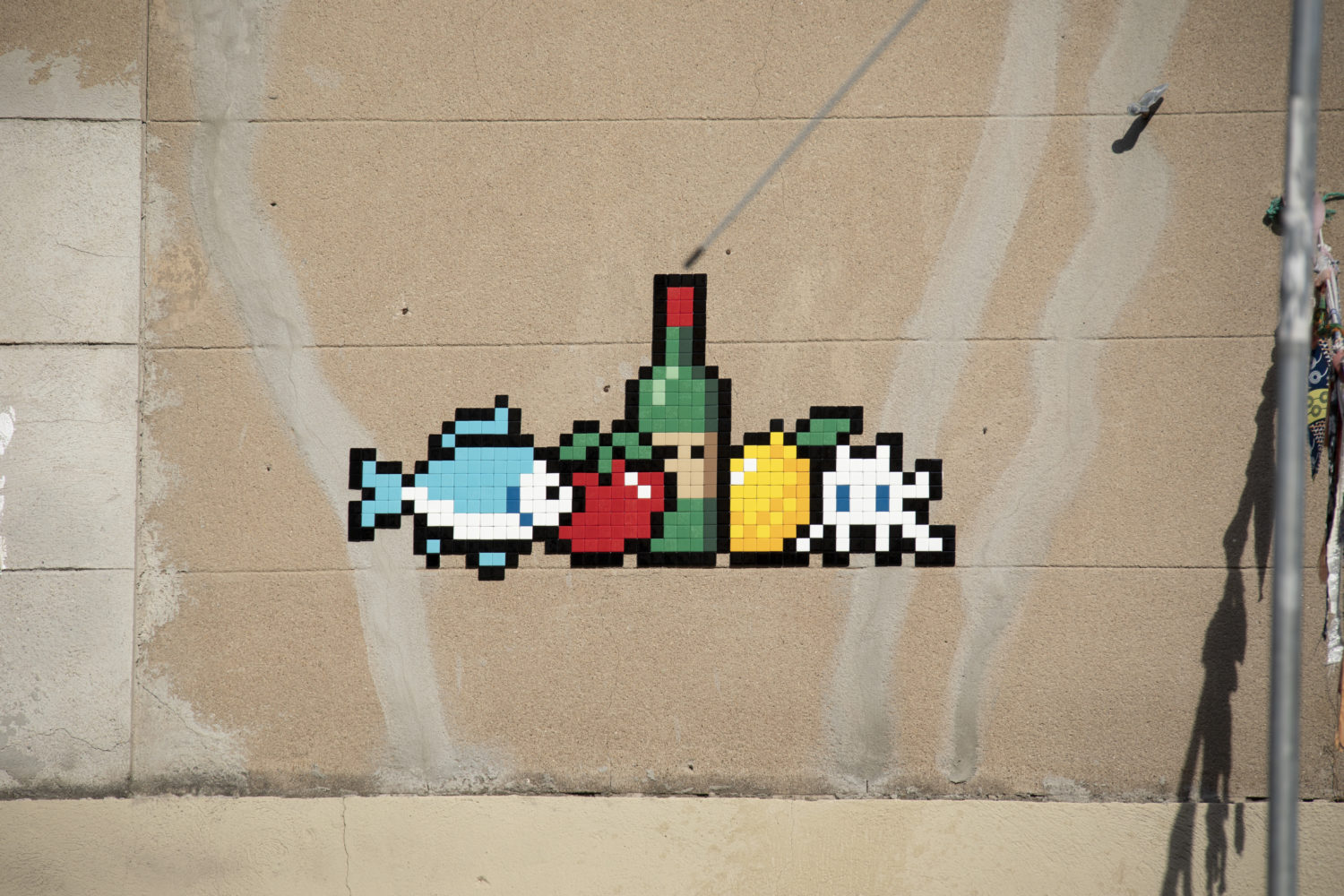 You were talking about the “flashers”, those are the people who have downloaded the app that allows you to list the works you have found and score points. There’s a whole community of people who follow his work very closely all over the world.

That’s right, and they’re all in Marseille right now! There are even the “reactivators”, people who restore the pieces when they are damaged. They are informed as soon as there is damage, and they come in a group to “reactivate” the pieces. It’s like they’re Invader’s army, who’s a bit like their superhero. They are extraordinary, they even wear Invader T-Shirts!

Invader is the eighth artist invited by the MAMO as part of a carte blanche.

Yes, he is the eighth artist in the “masters” series, which are the summer exhibitions. The idea is to propose monographic exhibitions that invest the whole space, inside and outside, in which I only invite artists who can master such a large space. Needless to say Le Corbusier’s architecture is already a work of art in itself, so you have to be able to come and put a work into a work.

Do you always have this desire for a dialogue with Le Corbusier’s architecture through these exhibitions?

Some artists have emancipated themselves from it, others have played with it and created a dialogue. In this case, the idea is more like a treasure hunt, putting the works in discreet places that are not necessarily visible at first glance. Everything revolves around the idea of finding the pieces that have been installed in strategic places and strong symbols of the Cité Radieuse.

You opened the MAMO on the roof terrace of the Cité Radieuse in 2013, almost ten years ago. What prompted you to get involved in this new project at the time and what changes have you seen, particularly in terms of the cultural influence of Marseille?

I think that the identity of a place is written through the different exhibitions that are created there. From the first exhibition with Xavier Veilhan to the most recent one with Invader, there is a real common thread, and I would even say that this is the case between the different artists who have succeeded one another. Jean-Pierre Raynaud, for example, worked with ceramics. All of them have in common that they work obsessively. I also have to say that I like minimal things, so there is always this notion with the artists we choose. 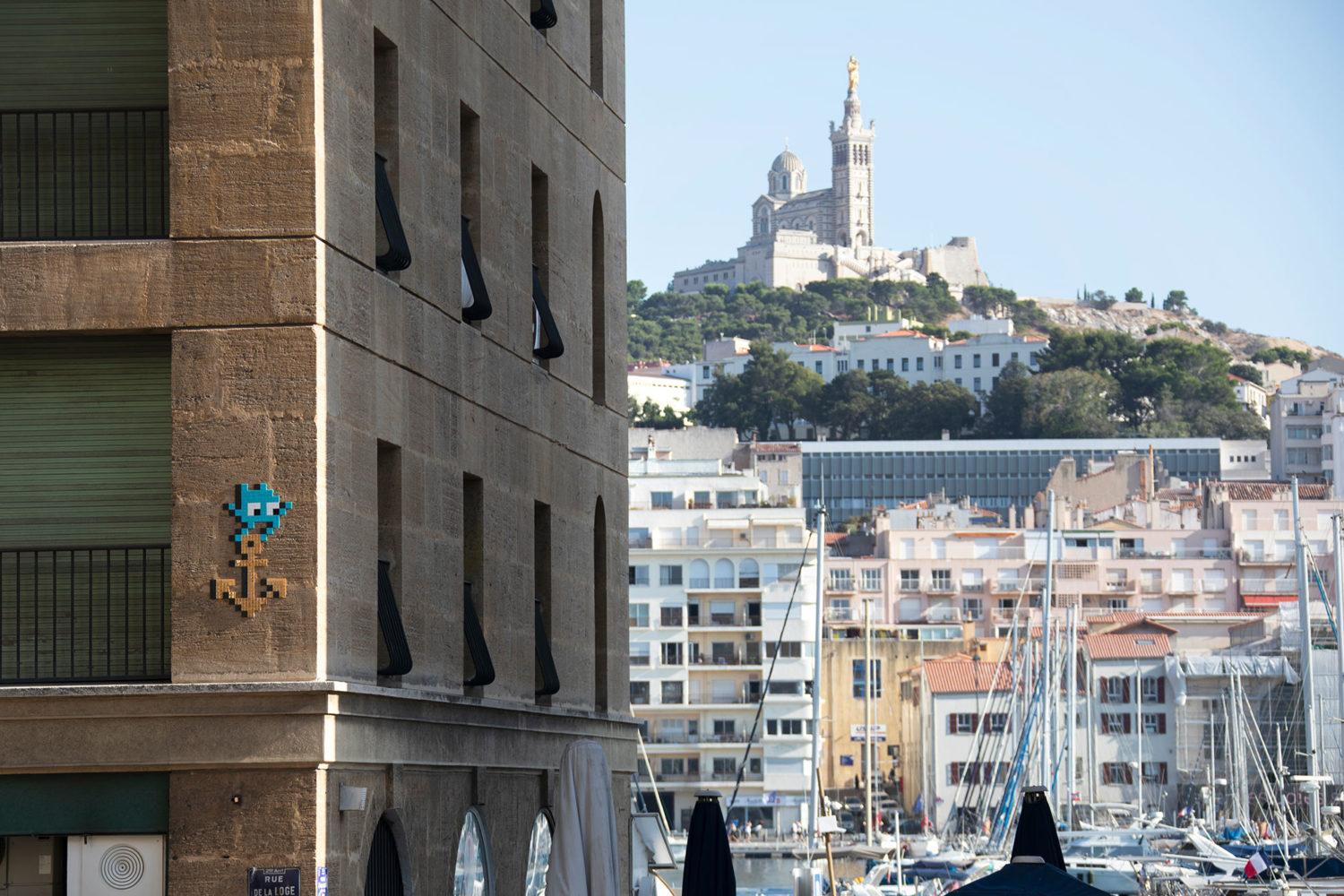 It seems that there has been a new craze for the Cité Radieuse for a few years now, when it had been somewhat forgotten.

This is mainly thanks to the nomination of Marseille as European Capital of Culture in 2013, and the entry of the building into the UNESCO World Heritage List. It’s incredible to think that this building is as important as a pyramid in Egypt!

Is Marseille a capital of contemporary art?

Of course, thanks to the Mucem, the MAMO, the Frac, the Friche de la Belle de Mai, and thanks to this new scene that is emerging, new actions and artists like Invader who are invading the city. It’s here, and it’s only going to get bigger and bigger.

You’re from Marseille. How do you divide your time between the South and Paris?

It’s simple. In Paris I work, and in Marseille I work in flip-flops… or by the pool. I also have a lot of projects in Marseille, I’m redoing the metro, the Place Castellane, and we just won the biggest contest in Europe to redesign a whole neighborhood. All this is my personal work, the MAMO is also a passion and a way to keep me busy during the summer because I find it hard to stay still!