“This is an album for guitar players, songwriters, good old farmers! For someone sitting on their rocking-chair on their front door porch!”

“None Of This Matters Now”, Papooz’ third album (released on March 18th), came to them like a burst of creativity. The album emerged at a time when the music had lost its scene, only a few days after the end of their most recent tour. In lockdown, Ulysse Cottin and Armand Penicaut wrote on their own, exchanged and gathered material before decide to settle for a few days in the southwest of France to record with their drummer friend Pierre-Marie Dornon. His studio, La Ferme Records, became the setting for giving birth to ten new songs, all recorded live, that reflect the duo’s desire to explore their music in a more instinctive way. Before the kick-off of their tour in London on April 22, Ulysse and Armand shared their inspirations, their vision of the world, and the story of their first meeting at a Patti Smith concert in Paris…

Your third album was released on March 18th. How did it come about?

Ulysse : We had just finished our tour for the second album when lockdown happened. We started to write each one on our own, me in Paris, Armand in the South-West of France, and we sent each other our material. Between the two lockdowns, we decided to go and record in the studio our drummer created. We locked ourselves up there and recorded. The album is different from our previous one because it is more “raw”. We took less time to do it, and we did everything to keep the live spirit, with our live voices, which means we did not pre-record over the music. It’s something we’ve never done before.

I can only imagine performing live if what you love most.

Ulysse: Live recording is a technique that has been lost because of new technologies. Using this technique allowed us to focus on the sacredness of the moment, and pushed us to be much more focused because we knew we couldn’t redo a take. It’s not the same mindset at all!

Who did you collaborate with on this new album? Are you always working with the same people?

Armand: We recorded the album with our touring band with whom we have been playing for almost ten years. We have almost no guest on this album, except for Pierre Rousseau, the former producer of Paradis who produces Nicolas Godin’s records. He did some synthesizer overdub for us.

Ulysse : The album is mainly all about our friends and us. Victoria Laufarie sings on one track and does backing vocals on others. It’s really a project between us, that we produced ourselves along with a sound engineer.

Armand: It was already complicated to get together during Covid! We finally did it in a forest in the South-West, near Lanton, a village near the Arcachon basin. We recorded in a studio called La Ferme which was built by our drummer.

Ulysses: And now he has left the group to become a full-time carpenter!

It seems that you wrote and recorded the album in record time!

Armand: We did two seven-day sessions. A first one in May, and a second one in October. Then we had to finish it up in Paris, plus mixing, which took a little more time.

How is the writing process between you two?

Ulysse: Since we weren’t together, we wrote a lot separately. “Hell Of A Woman”, our second single, was written entirely by the two of us. Otherwise we write each one on our side, we show each other what we wrote, and then the dialogue starts. 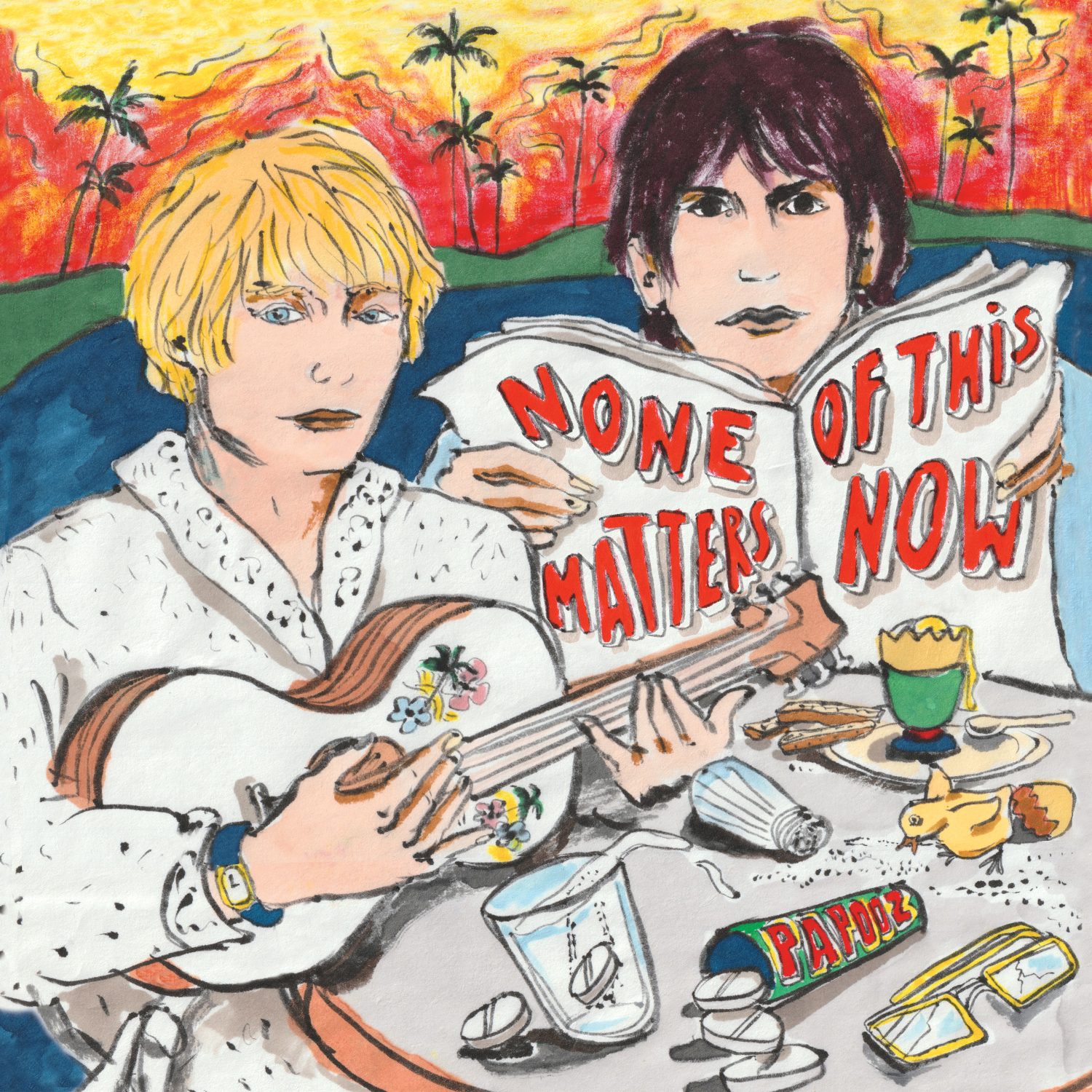 “None Of This Matters Now” album cover, Papooz, 2022, artwork by Victoria Lafaurie

The album title, “None Of This Matters Now”, resonates with what’s going on today in society, politics…

Armand: In the beginning, the song was about the climate crisis, even if we didn’t want to fall into a moralistic speech. Then Covid happened, so the song found quite a new powerful meaning. We sometimes ask ourselves if the Apocalypse isn’t at our door…

Ulysse: It’s a love song. It says “the world is dying, but I’m lucky to have you, and together we can survive”.

Your music always has something light, even if the themes can be heavy, as it is the case in the song “None of This Matters Now”. That’s what you’re all about, isn’t it?

Armand: It’s caustic. I’m all for music being fun, that’s the basis of everything. The music we make, and the music we listen to – like Velvet Underground, my favorite band – is still fun music. There’s a teenage feeling that remains eternal.

The Beatles immediately come to mind when listening to your music. They are often cited as one of your main inspirations.

Armand: The Beatles have inspired the whole world. They really reinvented Anglo-Saxon music.

Ulysse: And they took pop music to the next level. They were the first ones to fill stadiums and stuff. It was crazy at the time!

In terms of style, how does this new album differ from your two previous ones?

Ulysse: The references are different, maybe more similar to our very first album. There is less overdub, we worked more on instinct. We did it in a simpler way.

Ulysse: And above all, we had no producer as it was the case on the second album. We wanted to keep everything live, to use our tour musicians. For the second album, we had casted studio musicians, which is not the same approach at all. This is an album for guitar players, songwriters, good old farmers! For someone sitting on their rocking-chair on their front door porch!

Why did you choose to write in English?

Armand: It’s an aesthetic bias. I don’t think we could make the music we do in French. It’s like deciding to do watercolors without using watercolors. As teenagers, we were both influenced by the same music, English bands. We come from the rock revival generation, we were twelve years old at the time. We didn’t want to translate it by doing French rock. Imagine “Get Lucky” by Daft Punk in French! In the Anglo-Saxon world, a song remains a song, there is no pretension to think that it is poetry. France such a country of literature that each text must have a literary ambition, so the language is less forgiving.

Ulysse: The history of the music that inspires us was built with the English language. We refer to it, and we continue its path, so to speak. And then, rare are the French groups which sing in French and managed to find international success!

Are there any musicians you feel close to today?

Armand: I’m always making discoveries, I like to listen to what’s going on right now. For instance Hubert Lenoir, whom I discovered one or two years ago. In the French scene, I don’t feel like we are close to other artists, and it is not in the French spirit to create a “scene”. The last rock scene we had was the “baby rockers”.

Ulysse: There is a new scene of female singers who make music that is a bit groovy and funky, like Clara Luciani or Juliette Armanet. We are more in line with American independent pop bands like Mac DeMarco, Midnight Club, Connan Mockasin, Metronomy… Their last album is great!

You also take a lot of inspiration from the 70s.

Armand: Not necessarily! For example, I don’t feel like I dress like people in the 70s. I like to look for a sort of timelessness in both everyday life and music. That’s what I find most sublime with art, when it becomes immortal because the styles are very strong. It can be a J.M. Weston loafer or a white T-Shirt… Well, I happen to be dressed like that today! In music, it’s more or less the same: there’s always something a bit magical in the writing of songs, as if they were in the air and came to you, not the other way around. We tend to a timeless beauty.

Ulysse: It’s true that the 70s have aged well because they are still relevant today. It proves that there was consistency in the artistic proposals and style. I would be curious to know if certain styles of today will last in thirty years.

Will we still be listening to the Beatles in thirty years?

Ulysse: We still listen to Mozart and Bach, the Beatles will live on!

I read somewhere that you met at a Patti Smith concert.

Armand: I had jumped the queue to see an acoustic concert she was giving with her son in the Saint-Germain-des-Prés church. I went out to cut in line a second time (she was doing two sets!). Strangely I was all alone, and I ran into some friends who were with Ulysse.

Ulysse: I remember waiting in line but I don’t think I even went to the concert!

I really like the video for “None Of This Matters Now”. Can you tell me the story behind it?

Armand: Alice Kunisue directed it. She got the idea while reading a short story she had kept in a drawer. The story of two kids kidnapping their grandfather to get him out of his retirement home!

How did you experience lockdown as musicians?

Armand: We actually were lucky compared to many other bands we know because we had just finished our tour. We didn’t have to cancel anything. Lockdown for us meant boredom. It was difficult in terms of creativity.

Ulysse: Our creativity is linked to the experiences we make. We need to go out and see other things to be stimulated creatively. We also had to postpone the release of the album, which was frustrating.

Armand: It was also hard to keep artistic circles without being able to meet in a café. Paris is a city of cafés! That’s were the creative energy is! During lockdown or curfew, we used to meet near the garbage cans to share a can of beer before 7pm… We even got tickets! I don’t mind my mother asking me to go to bed, but not the police!