Portraits of a Decade

Françoise is the girl we love, who crosses the street at red lights, who parks her car in the middle of the sidewalk, who smokes in the elevator.

Johanna Senyk and Say Who go a long way. A friend from the very beginning, the designer has become one of the most striking faces of the Parisian cultural landscape over time. Her streetwear brand Wanda Nylon won her the ANDAM Grand Prize in 2016. Now done with this chapter of her life, she returned to her first love with Françoise, her brand born from her passion for clothing and for “women with character”. The Frenchwoman Françoise (not to be confused with the Parisian girl), is also Johanna’s good friends, such as Noémie Lenoir or Audrey Marnay who embody her perfectly. Completely self-taught, Johanna has built her creative process from her many friendships and one watchword: passion.

What defines the Françoise style?

Françoise is the girl we love, who crosses the street at red lights, who parks her car in the middle of the sidewalk, who smokes in the elevator. I wanted to have a very clear image and clothes you’ve never seen before: lamé jeans, singular shapes, details of menswear. I like the aesthetic of the end of 1970-1980 when women were getting ready to go out. It’s as if there had been a return to modesty after the end of the 1970s: you can no longer show your breasts or smoke or get a tan because it’s bad for your health, nor speak too loudly… All this makes me anxious. It’s also where I find myself as a woman. I like girls who are a bit cheeky and who do things their own way, and I don’t necessarily want people to come to Françoise to buy themselves a character. The Françoise woman already has character. I’m not interested in disguising people.

When did you start this new project?

It’s been more than a year now. We really put the turbo on last season, so it’s brand new! Now there is an entirely recycled line called “First”, which represents 50% of the collections. My challenge this year was digital. Not that it’s a solution to everything, but it will be a challenge to explain how to sell unique pieces on the Internet. Especially on the big e-shops like Matchesfashion that distribute me. There is a whole preparation in the shopping experience that will be new for me. 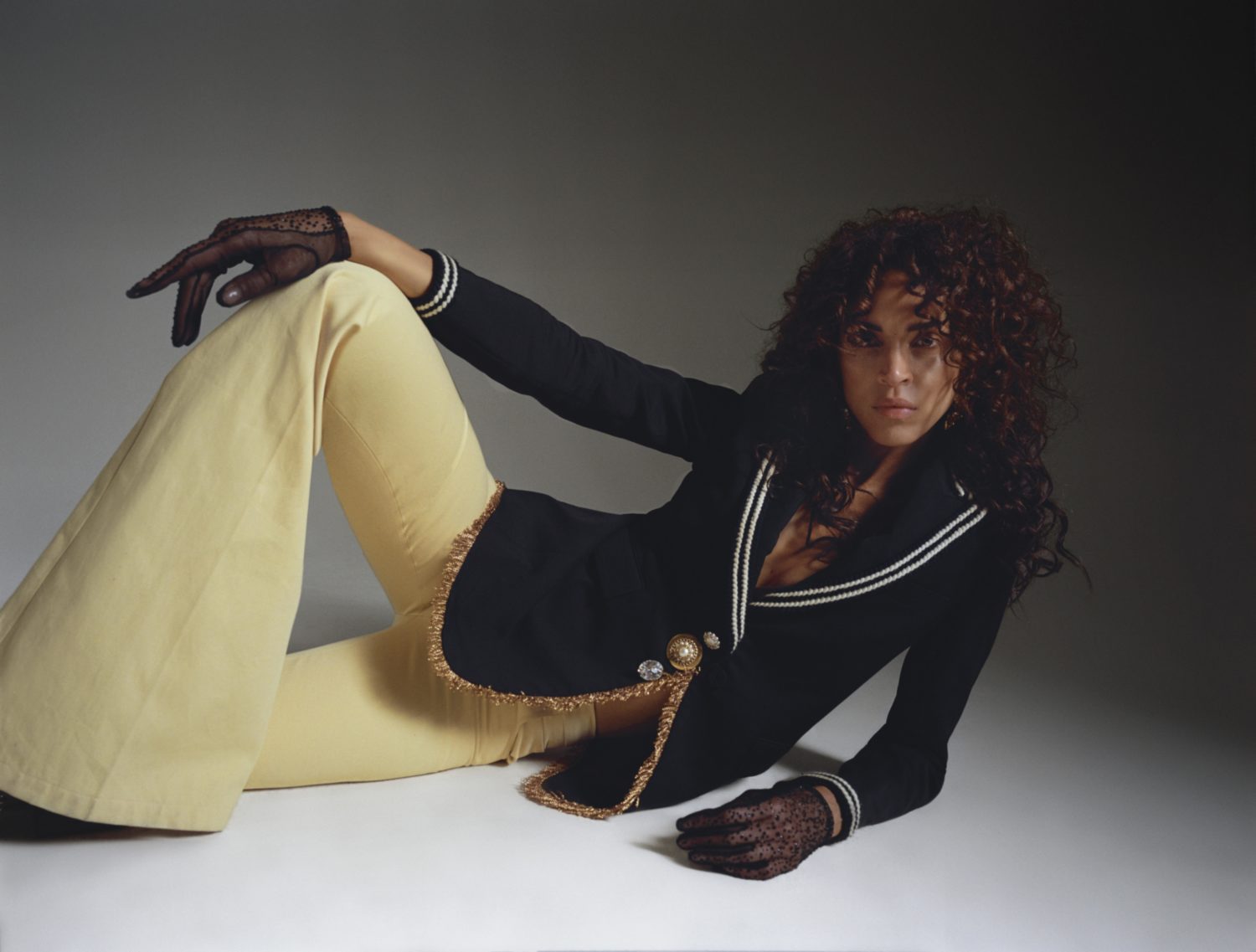 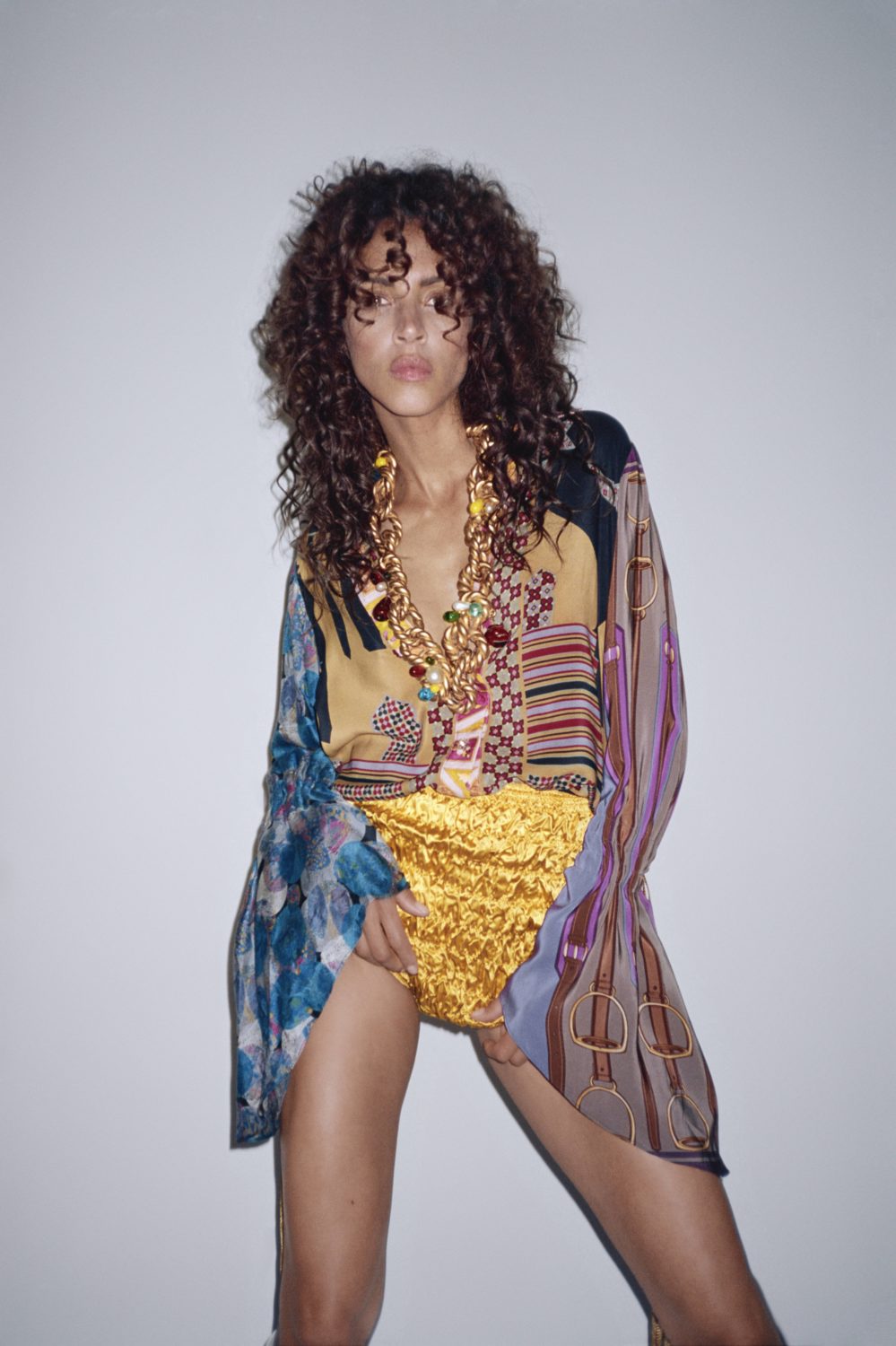 In the beginning, Françoise was a line of bags?

The person who makes all the bags for brands like Bottega Veneta introduced me to the Italian factory I work with today. At the beginning, we said we were going to start by developing the bags, and then something amazing happened. I arrived at the factory that was supposed to simply distribute me, and I realized that the woman at the head of it was Margiela’s right-hand woman. The factory is run mostly by women, there are only two guys, one in accounting, the other in housekeeping! I felt at home right away. It was love at first sight. It’s quite enjoyable to work with them because they are the manufacturers of Chanel, Valentino… The production is of very high quality, which I don’t find in France. The Italians have managed to industrialize family craftsmanship. We started by making four or five silhouettes, and it turned into a mini collection. Then we drew up a list of twenty sales outlets that we really hoped to get, and we got all of them! It all began like this.

Do you have a studio in Paris?

My whole team is in Italy: the pattern makers, the seamstresses, even the sales people. We have a showroom in Milan and New York, and I’m going to develop my office here in Paris even if I don’t necessarily need it. I just want to structure it differently and create synergies with people. A new way of appropriating a space, and working together.

The public knows you from Wanda Nylon. Are you working with the same people you used to work with?

No, it’s not the same thing at all. I’m very happy to have done Wanda Nylon because I learned to be on all fronts. Today when you’re a designer, it’s not like in the 1980s when everything was rolling and people come to you directly. Today you have to be a conductor and know how to manage marketing, finance, human resources, and so on! I used to have everything to do and I honestly spent 5% of my day drawing and doing the things I’m good at. Today, what I do is create, design, create volumes, prints, choose colors, produce videos, create content. That’s what I know how to do. And I’ve never been happier, because I’m in a setting where I can use my skills. But if I hadn’t done Wanda Nylon, I wouldn’t have the opportunities I have today. Now I can just as easily knock on a door and succeed in creating collaborations. 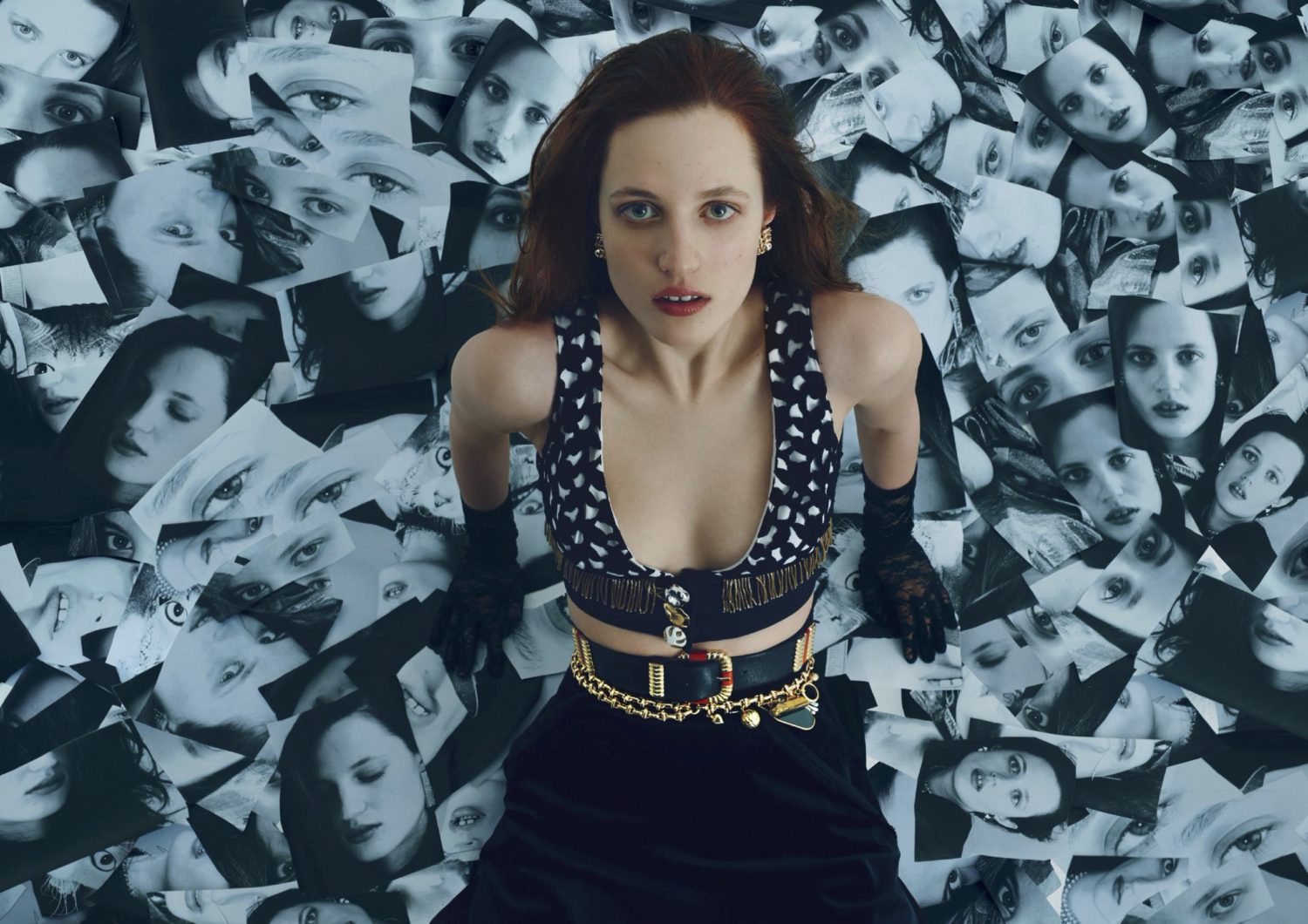 Where did the name Françoise come from?

I feel like it’s always been there, just like the logo. When Laurent Fetis showed it to me, it was obvious. I wondered what the name of a French brand could be… Françoise! There’s always a Françoise in a family! Françoise Sagan, Françoise Giroud, Françoise Dorléac… I also find it a bit old and too pretentious to give your name to a brand, in any case it’s not my thing. Me, I like concepts. I asked myself what else I could bring to the table, and that was my “French” taste. I started off on a very Seventies basis, but it’s not at all retro in terms of product treatment. It’s something ultra feminine. I have the impression that the feminine style has long been associated with an assexual woman, a bit chic and intellectual, with architect parents and who has read everything from de Beauvoir. And then there’s a very sexy trend, but it’s always a man’s point of view. At the end of the day, there aren’t that many women-made brands that are cool, sophisticated and sexy.

It’s true, but it’s not to be confused with “la Parisienne”! To be honest,  “la Parisienne” is a concept that comes from people who aren’t Paris-born. “La Parisienne” is like me: she is by definition adopted. Even though I love her very much, she’s not creatively inspiring for me, and frankly she doesn’t need me. The French woman, however, goes from “the cagole” to the girl from Alsace. Every season, I wonder where Françoise is going. This year she can’t travel, so I imagined her staying in Saint-Tropez. It materializes by big pink Vichy, macramé, striped jerseys…

Your collections also have that Seventies feel.

Not so much, actually. My eye will inevitably go to older things I can work with in new ways. I’m not into a “futuristic” or streetwear approach anymore. What I want to put forward is the qualitative argument. I travel a lot, and I realized that at the end of the day, of all the clothes I’ve kept in my closet for years, about twenty pieces have lasted over time. I try to create things that you can keep over time, both in terms of style and quality. The interesting thing is to create a balance. 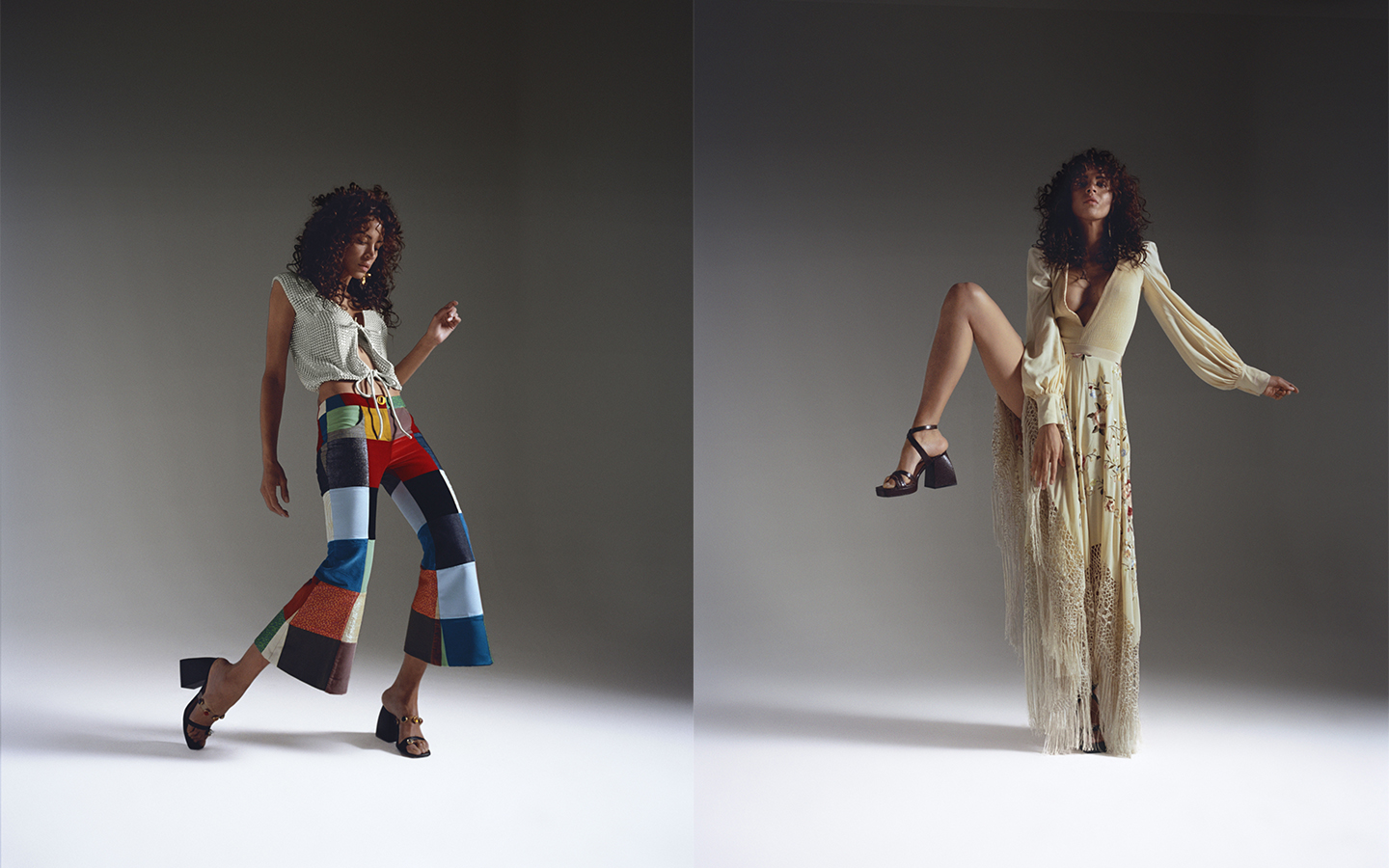 Has the eco-responsible approach been there from the beginning?

For a few seasons, and it’s now 50% of the collection. I photographed a few pieces on my friend Noémie Lenoir. For example, scraps of fabric recovered from unused stock, linings made with scarf scraps. All in all, I offer unique, responsible and qualitative pieces at a lower price than expected. I invent design systems, and that’s what interests me.

Do you have women in mind to embody Françoise?

Noémie Lenoir, she is my childhood best friend. We’ve even been roommates, we’ve known each other for 23 years! My friend Audrey Marnay, too. I’m very happy to work with my girlfriends. We grew up together. I’ve always made clothes for my girlfriends, and now that I can put them forward, I do! I started fashion in casting direction with Maïda Grégori, one of the greatest casting directors in the world at the time. I started as a casting assistant on an Alexander McQueen show, it was one of my first jobs and I will always remember it. When I started Wanda Nylon, I continued to work in casting to finance the project, including working for The Row, the brand of Mary-Kate and Ashley Olsen. I was in New York four times a year, and in London also for J.W. Anderson. At the very beginning, I was working at the Hyères Festival, where I became good friends with Anthony Vaccarello. We started to launch his brand together, storing his machines at my place. And we’re still very good friends today. These are not things that I put forward for my career, even if we all still follow our respective paths.

Say Who is celebrating its 10th anniversary today, and you’ve been there since the beginning. What makes the Parisian cultural scene special for you?

I think Paris is a niche where creative people from cultural backgrounds get together and work together. You don’t necessarily see that in Berlin or London, where people stay in their own environments, music, theater, etc. Paris is home to a unique cultural mix that allows a larger spectrum of artistic expressions to meet and merge. That’s really Parisian. For example, at the beginning of my career I would never have thought that I would work with friends who make video and sound, but today everything is coming together. Talents mix and complement each other, to express themselves with the same voice.

What is one event from the last ten years you will never forget?

My first event at the Ritz, a Dior party! Nan Goldin had been taking pictures of me all evening. She then exhibited them at the Montreal Museum of Modern Art. I have friends who went to see the exhibit and said “there’s a huge picture of you!”. I didn’t want to sign them with my name, so I put “Jo Anna” on them. I’ve never even seen these pictures! I remember that night, we were really in a great party mood…

What is or was your favorite place during the past decade?

I have known the Bains Douches, Hubert Boukobza, the Baron… I will also always remember meeting Lily McMenamy, when she was only six years old! I remember her, with her hyper long hair saying that her drink was “too lukewarm”. I loved it. I had a real night life these past ten years. There was also “La Johnson”, which name I found with Lionel Bensemoun and André Saraiva during a weekend in Cabourg. We were staying with Lionel’s mother! It was for the first Cabourg Film Festival. I went on stage to get a prize that no one was coming to get, and I left with my Swann d’Or! Nobody knew who I was!

Who’s the person of the decade for you?

I would choose Virginie Despentes. I find her to be true to herself and her artistic freedom, and I resonate with her way of looking at politics. I think she represents us very well.

What does Say Who mean to you?

Friends who have grown up together. I heard about Say Who at the very beginning, before the project was born. In the very first pictures, I’m probably sleeping on a couch in the back! They’re buddies who love buddies and support them in what they do. In short, Say Who is a family affair!