All projects are treated here as if they were art projects

Parisian nightlife is a state of mind: Alexander Keyes Rash knows this well. An American in Paris—in the wake of some meanderings in the South of France—he has both closely collaborated with the auction house Binoche & Giquello and lived in artist squats. Since April, he has overseen the new favorite spot in Paris for “bon vivants”: Serpent à Plume. A true gem located on the tony Place des Vosges, it’s a speakeasy-style cocktail bar outfitted with a collection of pre-Columbian art, a place where artists like Claire Laffut and Minuit are invited to perform, as well as a café and shop where you can purchase luxe pajamas. Before reopening post-holiday, Alexander Keyes Rash discussed the encounters that spurred his success, and the pleasures of a “Café Cocktail Pajama Party“…

How did you come up with the idea for Serpent à Plume?

The site opened its doors on Friday, April 13th! We are not superstitious, and it’s quite in the spirit of the place. “Serpent à Plume” refers to the pre-Columbian god, found in many Mesoamerican religions, and also known as “Quetzalcoatl.” I came up with the project seven months ago, and it’s been good training for me because I didn’t come from the hospitality business. The Serpent à Plume is constantly evolving; it is not something I can really explain. The experience we have here is a “moment in time.” There is, of course, the bar and the parties that we organize, but Serpent à Plume is also a café, a shop where we sell costumes and pajamas.

Why create such a versatile place?

The owner, Jean-Claude Binoche, wanted to rent the space to a major pastry brand. In the past, I have worked a lot with him on art appraisals at auctions, and gained his trust over time. I persuaded him to create something different from an art gallery or a purely commercial place. 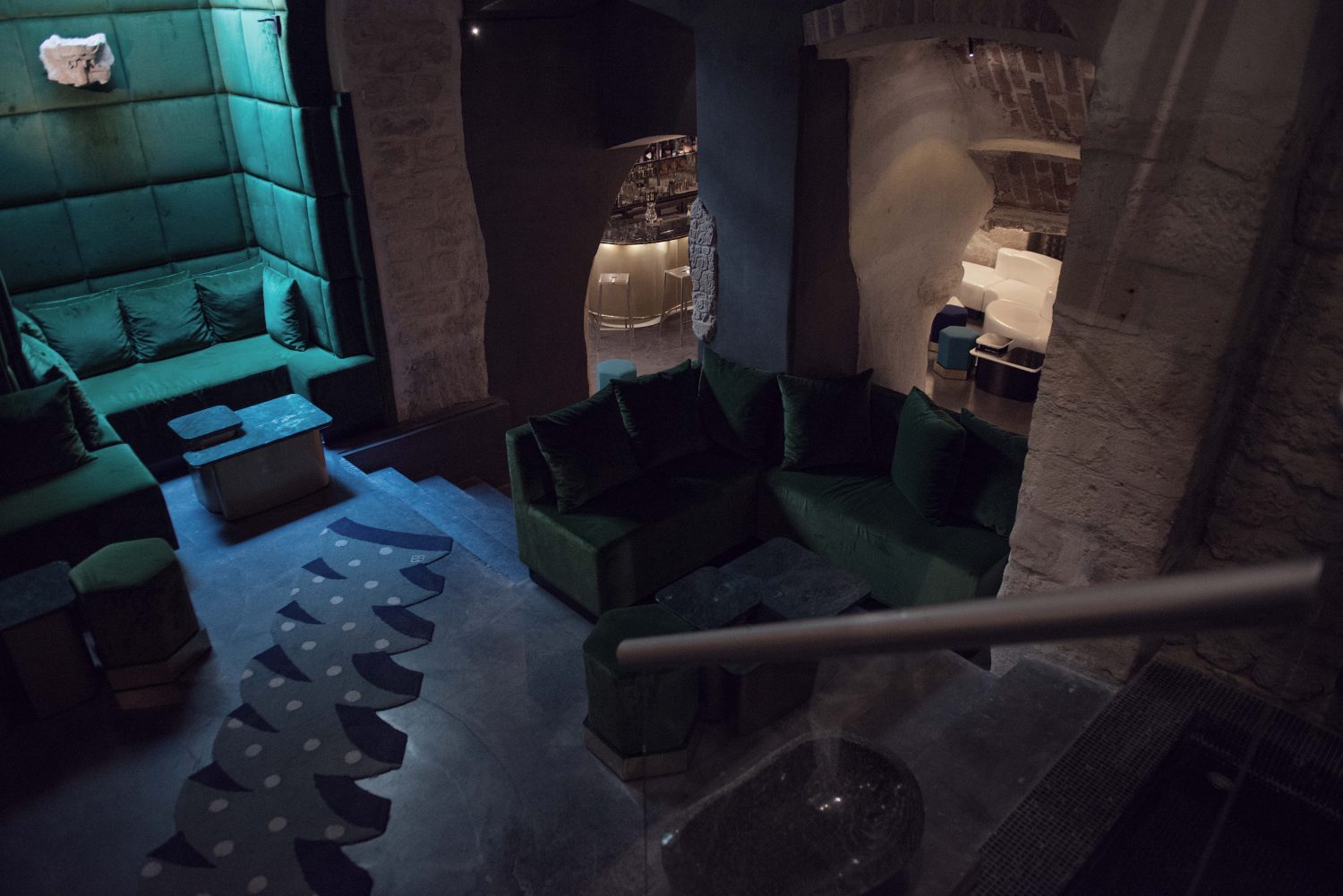 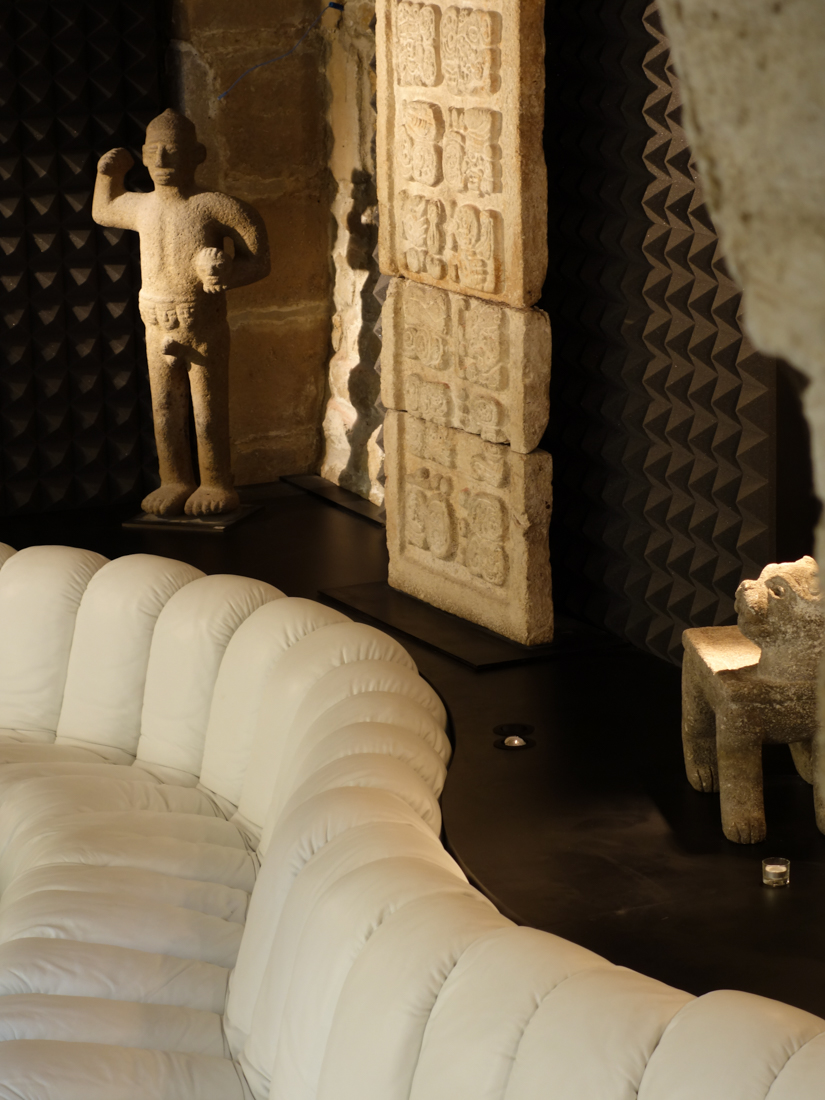 An establishment like Serpent à Plume is completely unique for Place des Vosges.

I was sure I wanted to create a bar, but I also wanted to have a kind of gallery, a destination that wasn’t just related to nightlife. I have always liked this paradox between “leisurewear” during the day, and a very “evening” aesthetic.

That’s your dandy side.

It’s mainly thanks to the work of Fred Castleberry, a very good friend I know from New York, who helps me a lot with the visuals. I also sell his clothes in the shop. There is indeed this dandy identity, but also a little punk. I like the expression “the better you dress, the worse you can be.” We wanted to create a speakeasy, yet the bar is not really hidden: you just have to go through the space and find your way around. We showcase the café and the shop, because they overlook the street. In the shop, you can find Fred’s clothes and the work of a publishing house, Croatan Edition, of which I am a member; they focus on graffiti and the Paris underground life. It’s a kind of cabinet of curiosities.

What was your background before creating Serpent à Plume?

I worked with a few auction houses, including Drouot and Binoche & Giquello. Before that, I worked with Croatan Edition; we were self-producing books. The project was discovered by an auctioneer at several of our exhibitions. He saw that I spoke good French and he wanted to get closer to American customers. During auctions, I was beside to him, in contact with American customers by phone. I also worked with him on his catalogues. And I grew up in this milieu of African and pre-Columbian art.

When did you move to Paris?

I arrived in Paris five years ago, and I studied at Sciences Po in Aix-en-Provence. Marseille was a very attractive city for me because it was the European Capital of Culture that year. At the time, I was a bit “anti-Paris”; I wanted to be out of it. I met graffiti artists, people who had alternative lifestyles. Very quickly, I integrated this scene. After this first year between Aix and Marseille, I more or less “squatted” in Paris for two years, in the Hôtel des Arts et Métiers, which was formerly a squat! I had a very different rhythm. During exhibitions, I was able to meet people from the art world. It was funny to move from being a student to organizing exhibitions and rave parties, and then to enter the art market right away. There are a lot of paradoxes. By creating this space, there is obviously this platform that is the Place des Vosges—but, for me, it was always a way to break the codes.

Who comes to Serpent à Plume? Did you already have a typology of customers in mind before opening the space?

I’ve spent my life crashing parties, events, climbing ladders… I didn’t really want to have a selection at the entrance. What I like is this family aspect. Many people are collectors between 50 and 70 years old, many are also young artists who do not necessarily have the means to buy drinks. People sometimes come with their own flasks, and that doesn’t bother me. Maybe I’m a bad capitalist on this one. It is important to have customers who buy, but it is also important to have a population that provides the atmosphere, the “mood.” 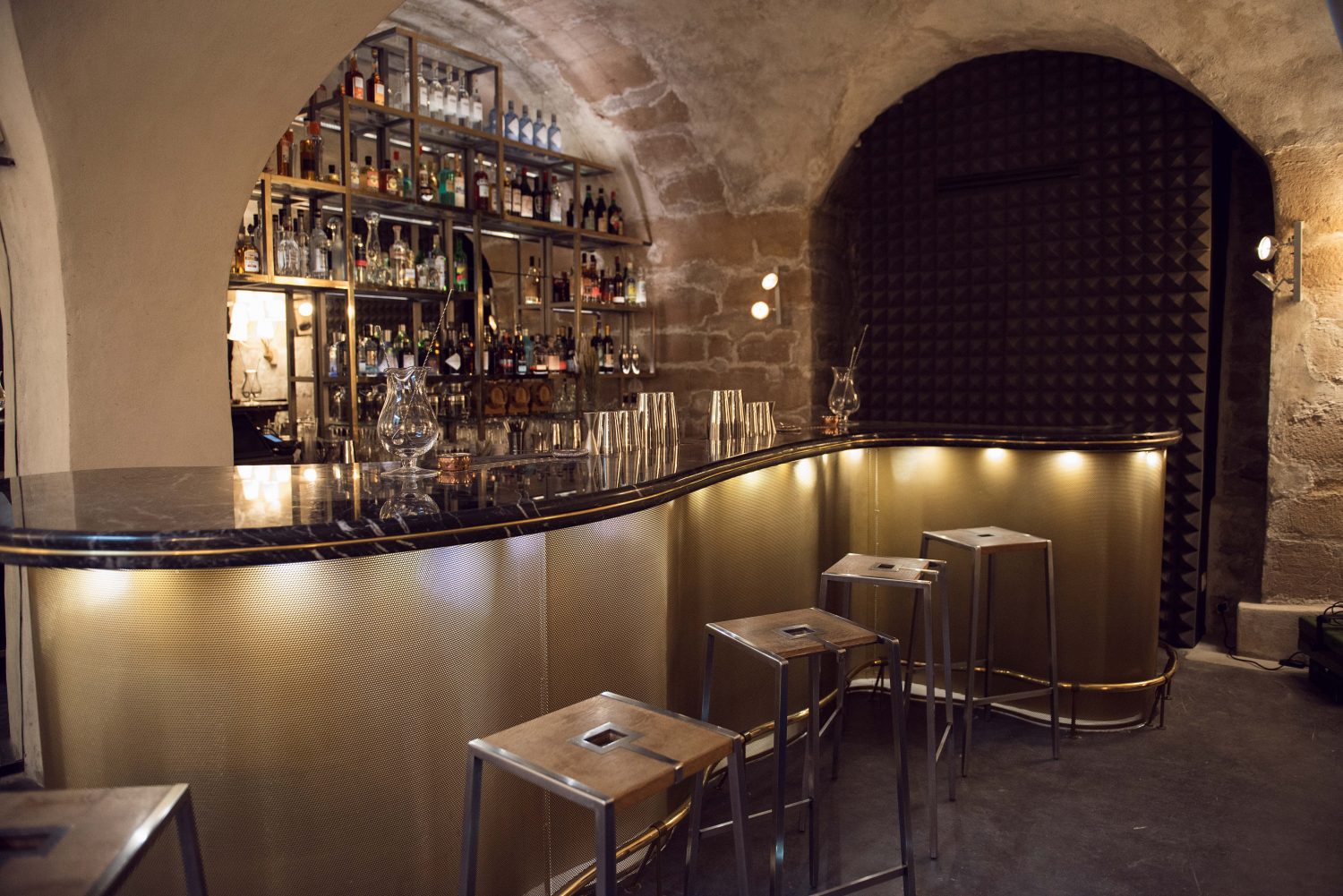 Serpent à Plume is known for its amazing cocktails…

We’ve managed to create something good, but it’s sometimes a little too elaborate, especially for parties where we have a lot of people. Our cocktails have funky names like “Law School,” “Edgar Don’t Cheat on Me,” “Never Keep a Lady Waiting”… My two bartenders, Theo and Omar, finish the cocktails with very sharp ingredients. People come for the music but also for the experience that is offered to them through drinks. It is the heart of Serpent à Plume. We are also going to release a new menu with hand-done drawings.

Who makes all these drawings that announce your events?

It’s Téa, a mythical girl who is in charge of the artistic side, and also one of my associates, Cesio The Cat, our capitalist friend who likes power and money! The three of us are the heart of Serpent à Plume.

The phrase “la lutte continue” (keep fighting) often comes up in your publications, and on Instagram in particular. Can you explain that?

It comes from our party plans with my friends: we organize a lot of free parties in Paris. We use the slogan “nothing is real, everything is allowed” a lot—that comes from graffiti. These expressions remind us that while we are certainly in a chic place, there is always this punk side. All my friends who help me with artistic direction are former graffiti artists and squatters.

Serpent à Plume has a strong identity, and you have had many collaborators— Vincent Darré worked on the layout of the basement space. Can you discuss these collaborations?

The skeleton of the place was made by an Argentinean friend, Patricio Elliff, who also created the glass staircase. Personally, I don’t like new things: I like objects that have personality, which is something I developed by spending time at Drouot. The first piece I bought was the large white De Sede sofa. It was then that I met Vincent Darré, at a soirée thrown by mutual friends. He helped me decode the space, and did a good job of highlighting it. He also created the “green” space above the bar, which is perhaps the most photogenic, as well as the bar and the coffee shop. It was a great collaboration, and I really needed him—his personality! I am very inspired by Wes Anderson: the staff wears a turquoise uniform created by the brand Palomo Spain. I had given them the first floor of the building for a runway show, and in return they gave me these uniforms. It is all these small encounters that have modulated the space and created what is now Serpent à Plume. We’re not totally defined, but we reward inspiration, influences, dandyism… I am very committed to the graphic charter. Everything must be done by hand, including drawings. All projects are treated here as if they were art projects. It’s not just about throwing out a Facebook invitation to promote an event—you have to go further than that.

There’s a little something extra at Serpent à Plume with your jacuzzi!

The jacuzzi has always existed, but it was originally a fountain. When building the stairs, it was easier to keep the fountain than to destroy it. If the jacuzzi could talk, it would have stories to tell… I have two rules: the first is that you can’t come in your bathing suit. Without forcing any nudity, it should be something spontaneous. Second, there can’t be more than twenty of us in the hot tub! And that’s not too bad to start. 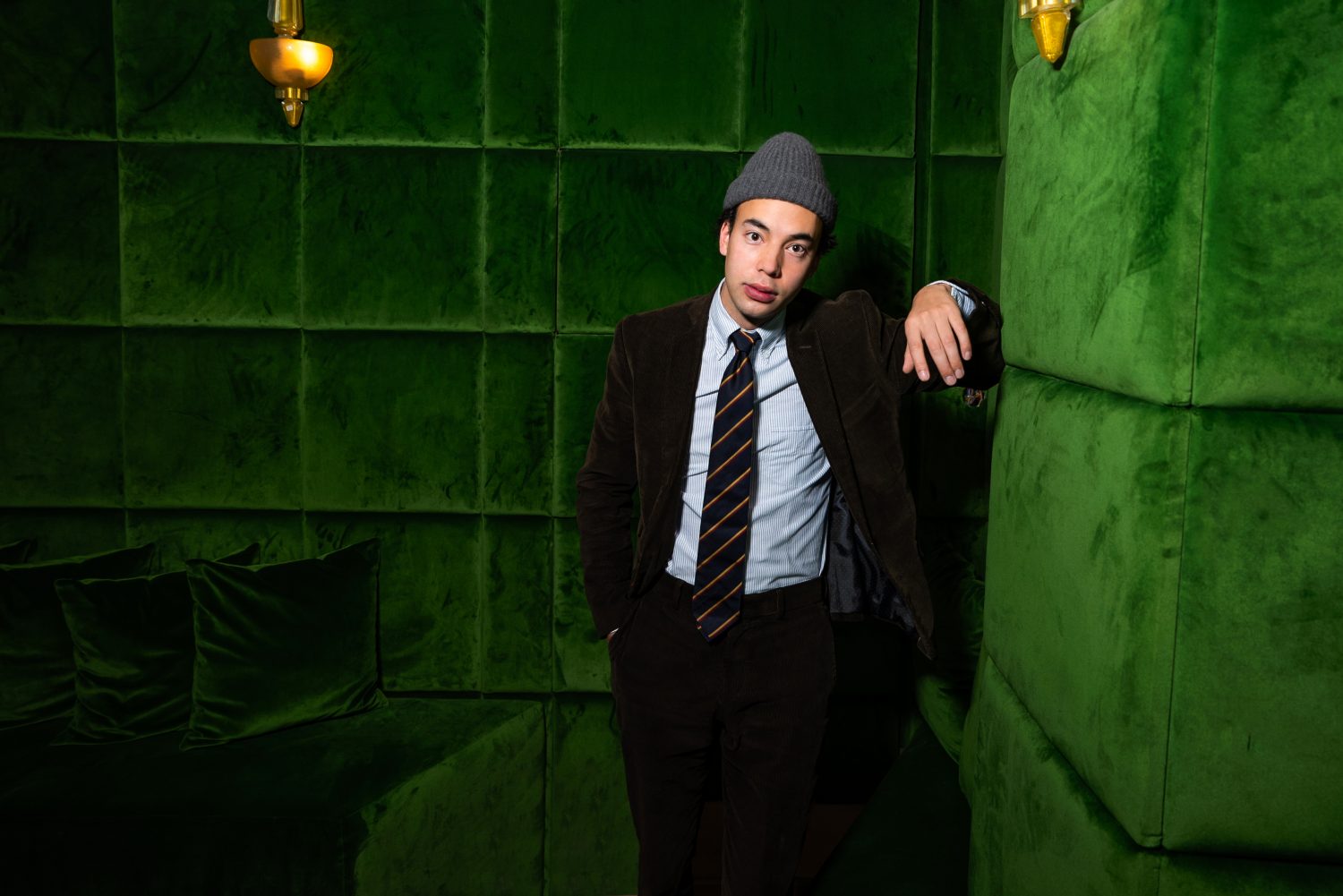 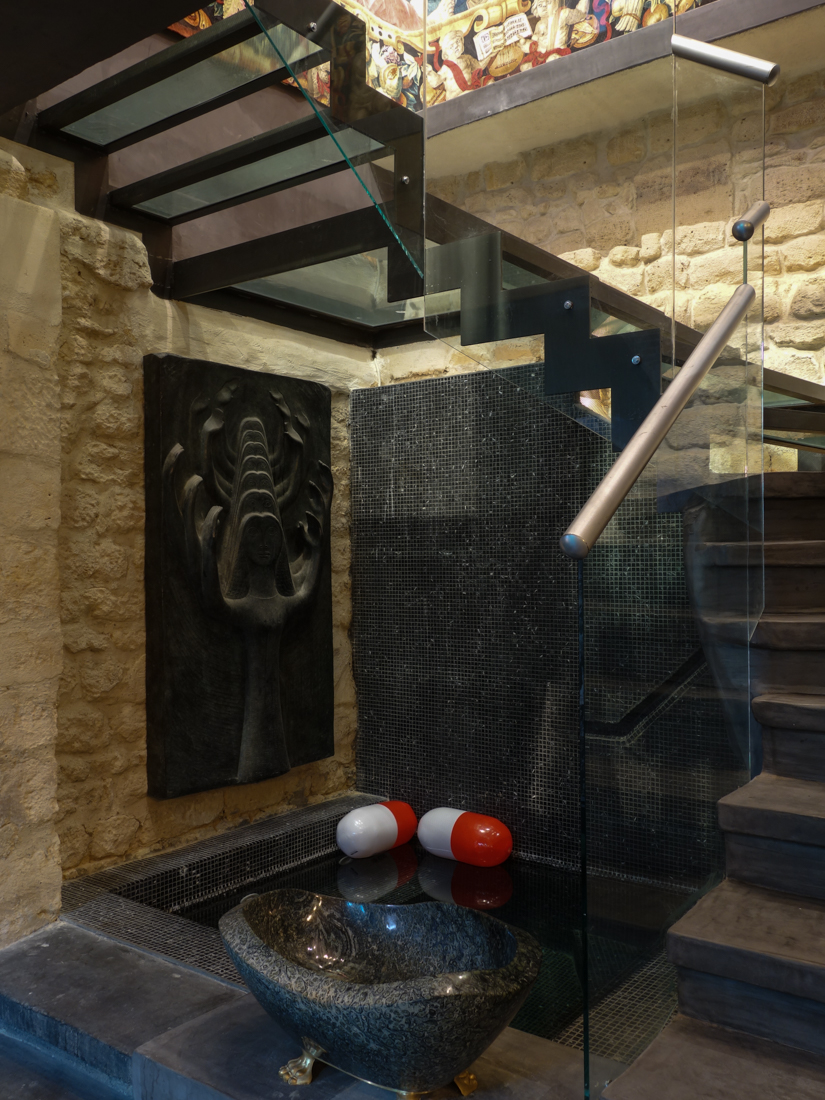 Let’s talk about the aesthetics of pajamas.

The pajamas we sell here are obviously for evening, but they are also festive clothes. I noticed that even though the shops are closed at night, people like to look at—and buy— pajamas after drinking two or three cocktails. And they end the evening in their pajamas, which is quite funny. The idea of pajamas came from the desire to mix genres, and not to take yourself too seriously. There is also this “uniform” aspect. It’s a suit: you never buy the top of your pajamas without the bottom. I think men’s fashion is not that complicated. I’m also here to help men find their style, to “dress up” or “dress down,” but always to dress for an occasion.

I would like to organize more “unexpected” parties. I have already organized a classical music evening on a Friday, called the “Midnight Classic.” At midnight, when everyone has “heated up” a little, we cut everything off and a quartet comes to play a piece of classical music for twenty minutes—that’s the limit of what customers can bear! It’s very unexpected, and people like it. I also wanted to promote more techno, more live music. Music programming is an essential part of the space—as much as the cocktail menu!