Tokyo is a city where past and future coexist.

At a time when travelling and discovering new cultures has become difficult, the Agency for Cultural Affairs, Government of Japan, has launched an initiative to promote the uniqueness and multi-dimensional appeal of the Japanese culture. Called CULTURE GATE to JAPAN, the project consists in a series of exhibitions held at seven airports across the country. The Tokyo International Haneda Airport and the Narita International Airport are both hosting VISION GATE as part of the initiative: an exhibition of eight groups of Japanese artists from all generations curated by MoMA Senior Curator of Architecture & Design Paola Antonelli. While Yuri Suzuki and Miyu Hosoi present the sound installation « Crowd Cloud », six groups of artists present their vision of Japanese tradition and future through a series of videos displayed in the airport’s arrival concourse and various places. acky bright, Jun Inoue, Mariko Mori, Monika Mogi, PARTY, and Sachiko Kodama all give their own interpretation of their country’s unique culture for people to experience just as they get off the plane…

What does the idea of ‘vision’ evoke to you as an artist?

There are many purposes for visiting Japan. You can either choose to dive into traditional culture by visiting historical buildings like shrines and temples, seeking the culture of Zen, the tea ceremony or kimono… Or you can be interested in pop culture like anime, manga and Kawaii, and look for the complexity of the expressways, Japanese signboards, the cyber cityscapes of Shibuya… Tokyo is a city where past and future coexist. When I thought about it, I thought, “Oh, Tokyo is just a theme park.”

How much is your work influenced by your Japanese roots, and the tension between past and present, tradition and innovation in Japanese culture?

I put a lot of thought into how I could excite people from different countries, languages, and cultures while making use of manga, one of the significant cultures of Japan. When I joined the project, I thought I would get rid of lines and frames that could limit the number of people who can understand what it is, but I would keep onomatopoeia because it looks cool as a design.
I came up with the idea of taking inspiration from ancient Japanese picture scrolls such as “Frolicking Animals”, which is also said to be the roots of manga. Instead of drawing on paper, I used a mobile tablet device as well as time-lapse to create a video work. You can see  I intentionally expressed tradition and innovation in the production process of my work. I am mostly influenced by Japanese manga in the 80s and 90s, but I was able to embody new interpretations and merge trends in them, so the creative style itself can be considered as the representation of tradition and innovation. Depending on who sees it, it may make you feel nostalgic. 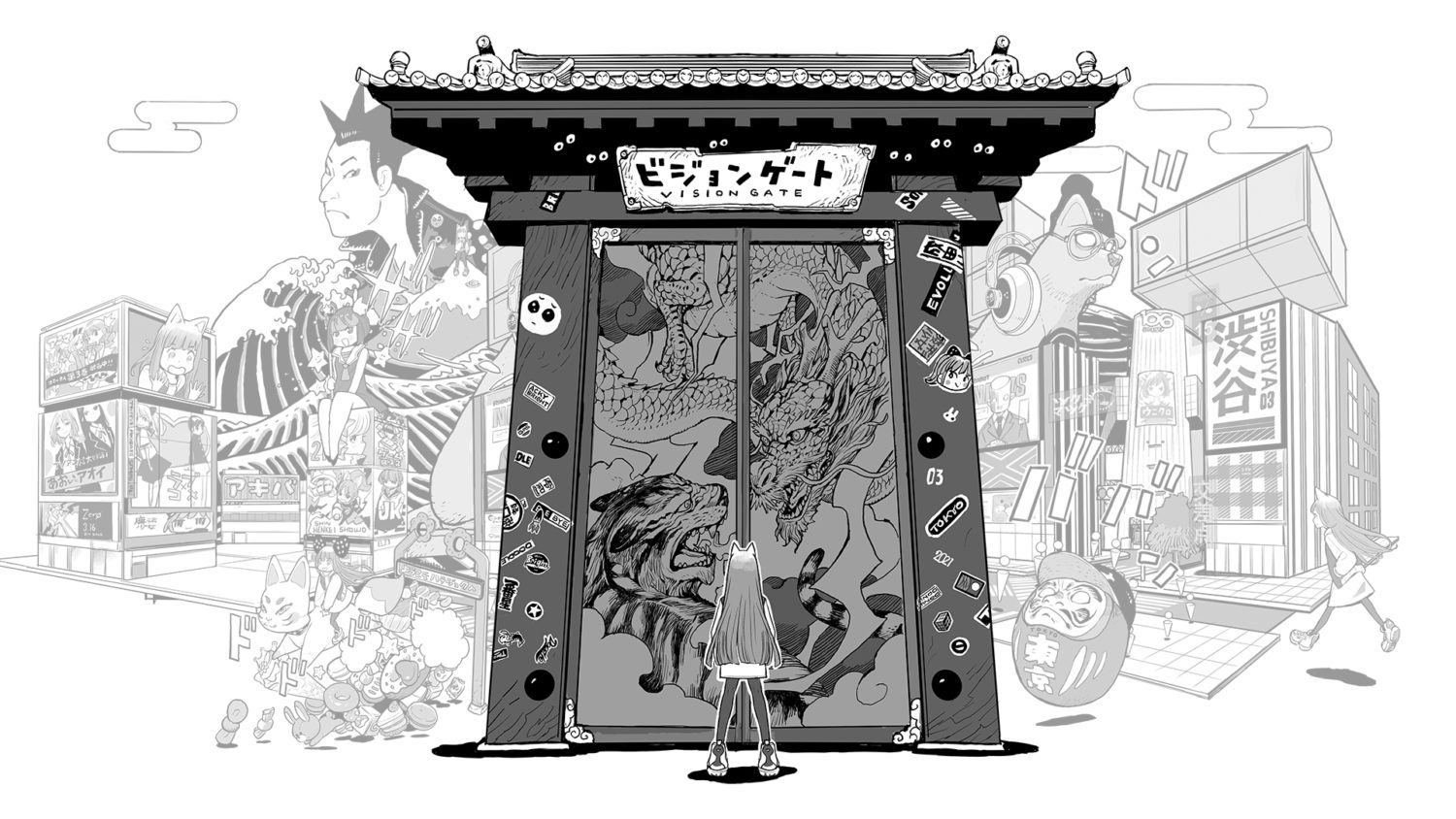 Can you tell us about your work presented for ‘VISION GATE’ and displaying it in an airport as opposed to an art gallery?

I was very impressed when I read Paola’s text about “VISION GATE”. It expresses how Japan is a country with a unique culture, and made me realize how I would like many Japanese to be aware of it. I had the idea to create a piece that would excite and uplift foreigners arriving on Japanese ground.

Instead of depicting Tokyo as it is, this is a fantasy of Tokyo as a theme park. The intersection of the expressway is represented by a large snake named “Yamata no Orochi” which appears in Japanese mythology; the town of Shibuya is Tetris; Youkai, the Japanese ghost, lurks in temples and shrines; samurai are robots… Of course, these do not exist in real life, but some people can imagine them when they see these places.

It sounds very uptight to merge arts and foreign culture together but I don’t want anyone to take this too seriously.  I want the audience to feel freely with what they see. What I wanted to tell everyone of all ages through this work is how fun the city of Tokyo is. I do want as many people as possible to see this in the airport and feel the excitement of going through the gates as you arrive. It would be an honor if anyone walking in the city and goes “wait, is this the place I’ve seen in acky’s work…”.