The welcoming feeling of “Crowd Cloud” gives the people an opportunity to transform from visitor to an active audience.

At a time when travelling and discovering new cultures has become difficult, the Agency for Cultural Affairs, Government of Japan, has launched an initiative to promote the uniqueness and multi-dimensional appeal of the Japanese culture. Called CULTURE GATE to JAPAN, the project consists in a series of exhibitions held at seven airports across the country. The Tokyo International Haneda Airport and the Narita International Airport are both hosting VISION GATE as part of the initiative: an exhibition of eight groups of Japanese artists from all generations curated by MoMA Senior Curator of Architecture & Design Paola Antonelli. While Yuri Suzuki and Miyu Hosoi present the sound installation « Crowd Cloud », six groups of artists present their vision of Japanese tradition and future through a series of videos displayed in the airport’s arrival concourse and various places. acky bright, Jun Inoue, Mariko Mori, Monika Mogi, PARTY, and Sachiko Kodama all give their own interpretation of their country’s unique culture for people to experience just as they get off the plane…

What does the idea of ‘vision’ evoke to you as an artist?

Yuri Suzuki: “Vision” is needless to say not just about the visual. The feeling of vision can also mean resolution and future passages. As an artist, I want to portray the potential future of Japan through this installation. Thousands of events were cancelled last year due to the pandemic and everyone is still recovering. However we look forward to hosting the Olympics and Paralympics to Tokyo, and uniting countries and people. In a normal context, this in itself would be a challenge, but we are now facing an extraordinary one that could bring some excitement and a much needed break. “Crowd Cloud” is located at the entrance of Tokyo International (Haneda) Airport. It positions itself as the gateway for starting a new chapter in this country.

Miyu Hosoi: I am still thriving as an artist and my focus has always been on my work and how to convey my message through those works. I haven’t been able to articulate what I can contribute to the audience. After Paola gave us the concept “vision”, I went back to my previous works and started to rethink about what “vision” I had. What I discover throughout the process is that if you have a clear vision, want to challenge, and expand the reality, people can resonate that no matter what. I usually work with team to create art works and I realize those members are there because we share the vision. In other words, I was not making a new work, but rather presenting “vision” which is hard to see and reach, but people want to get close to. As a result, a lot of my works require very advanced technology which only can be achieved with the best possible engineers (For example, I’m currently working on a project that will be re-exhibited in 100 years using technology of the future). Although the word “vision” is very simple, it seems to me that my work as an artist is to collect the production team who can share the vision I have and embody it. I can say my artistic work and the idea of vision are now more aligned than ever. 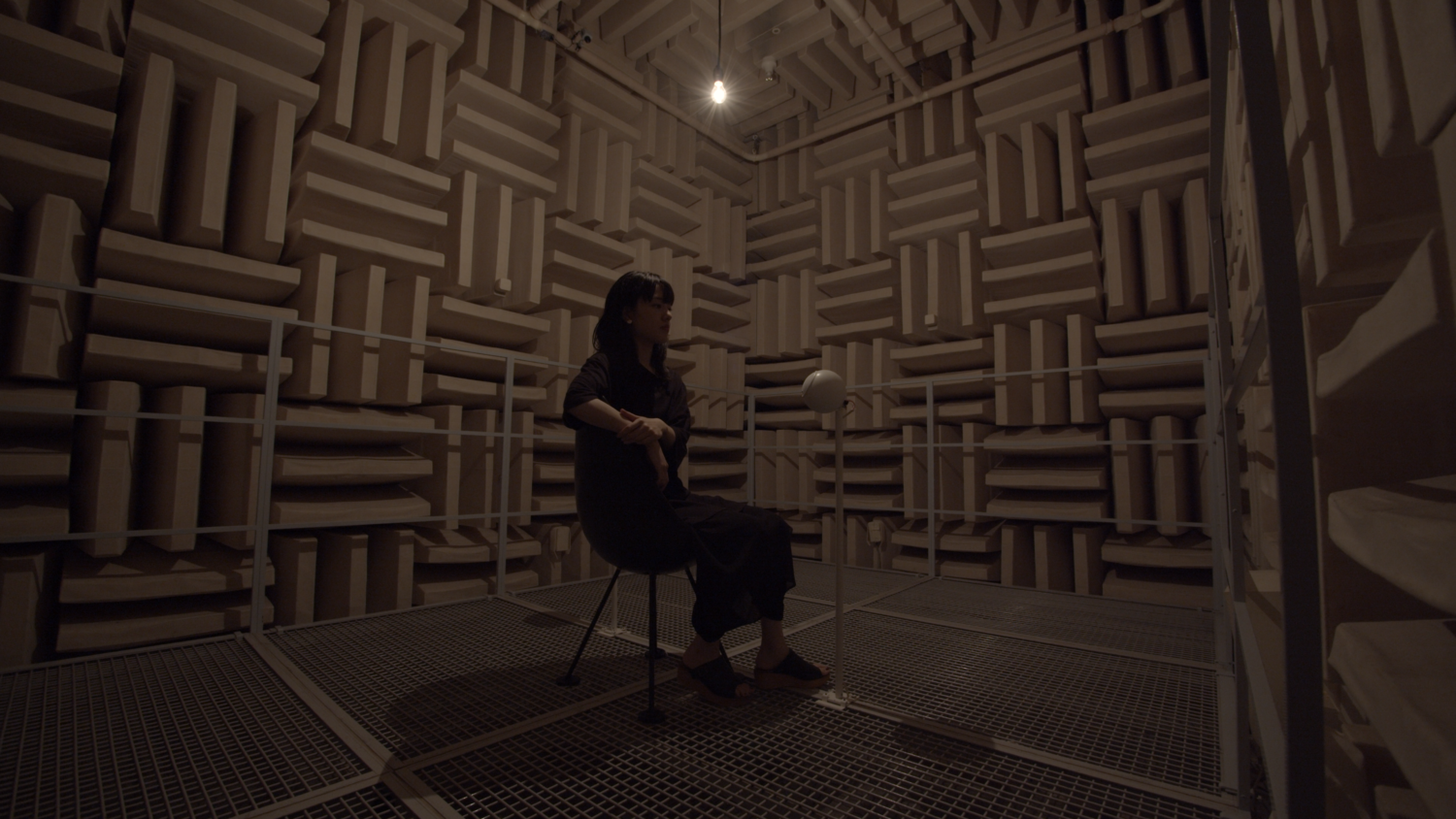 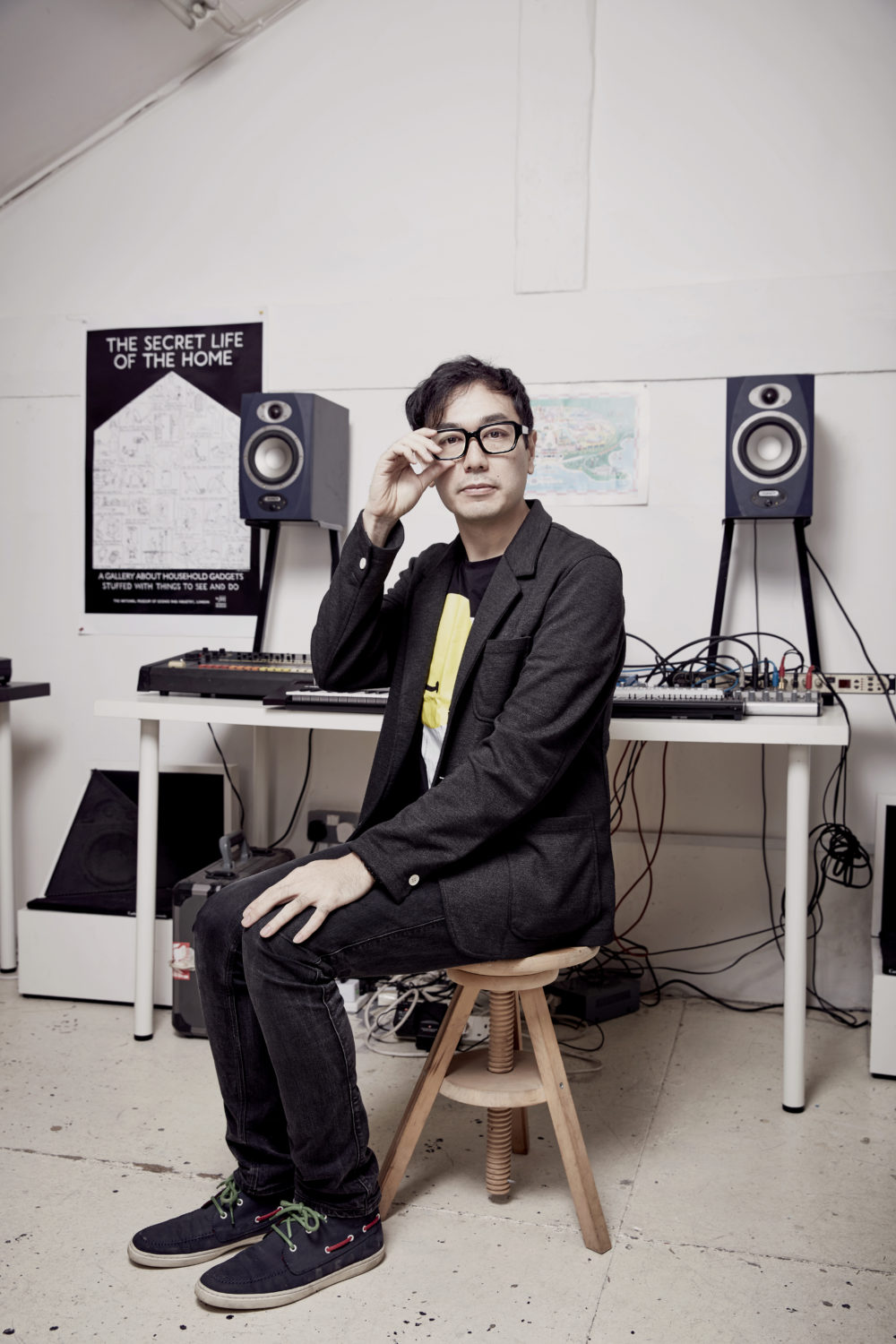 How much is your work influenced by your Japanese roots, and the tension between past and present, tradition and innovation in Japanese culture?

Yuri Suzuki: I was born and raised in Japan, which gave me a strong sense of the Japanese way of life and way of thinking. “Crowd Cloud” was curated by Paola Antonelli. Having her input and insight has been extremely valuable. She considers Japan as ‘Far East’ culture: something curious, exotic, different from Western culture. This resonates with me as I currently live in the UK and have lived in other countries within Europe, as well as the United States. This has allowed me to experience both perspectives. From the perspective of ‘Far East’ me, Japan is organized, Japanese people have the ability to adapt and are modestly greedy (in a good way). For ‘Western’ me, Japan is catchy and pop, and this is a country where modernity and tradition live harmoniously. These parallels were the starting point of the concept for “Crowd Cloud”.

On one hand, the Japanese language is uniquely bold, which makes it instantly recognizable. Japanese does not contain a lot of vowels (only 5), which makes pronunciation simpler. It also makes the language seem familiar to others from around the world because the majority of languages share the a, e, i, o, u vowel sounds. On the other hand, there is this incredible craftsmanship. Japan is well-known and respected for sophisticated craft techniques. We are very lucky to have worked with a craftsman from Takaoka who specializes in anodizing. It provides an additional aesthetic layer to this installation, and gives it a strong presence.

Miyu Hosoi: I’ve always lived in Japan, so I’ve never had that global perspective of  Japan as my collaborator Yuri Suzuki has. So my intention was to be who I am and to express what I truly wanted and I knew this would give the most Japanese expression of today alongside with Yuri’s international point of view. The tension between past and present resides in how I could distance myself and the work from a so-called “Japanism” and how I could update the idea of “Japaneseness” which can be seen in a lot of art works. I could have useed Gagaku (traditional court music) and Japanese classic tunes for my creation. But I chose not to, because I did not want to exploit our long history. I’m not denying the influence history has in today’s world, and I am not objecting art forms which have long traditions. I have so much respect for those arts that were once sacred and have been protected. I knew it was not just about the “tension between past and future”, but rather the intention we must take into consideration.

When we were discussing about how the Japanese managed to keep our history intact until today, we came up with the notion of language. Yuri gave an interesting point of view about language from an overseas perspective. The sound of the Japanese language was not particularly unique to me, and rather ordinary because it has been and is part of my everyday life. But having this conversation with Yuri and Paola was a turning point and led me to investigate my creative path for this work. Also, having three of us in different cities of the world and working together to create this new work is the true representation of tradition and innovation.

I’ve worked with craftsmen in Takaoka, Toyama Prefecture for several years, and this relationship led them to participate in the production of this work. They really are the representation of vision between tradition and innovation. Not only are they working with traditional craft but also renewing the skills and leading them to the future. They are handcrafting history and I am honored to be able to create the future together with them. 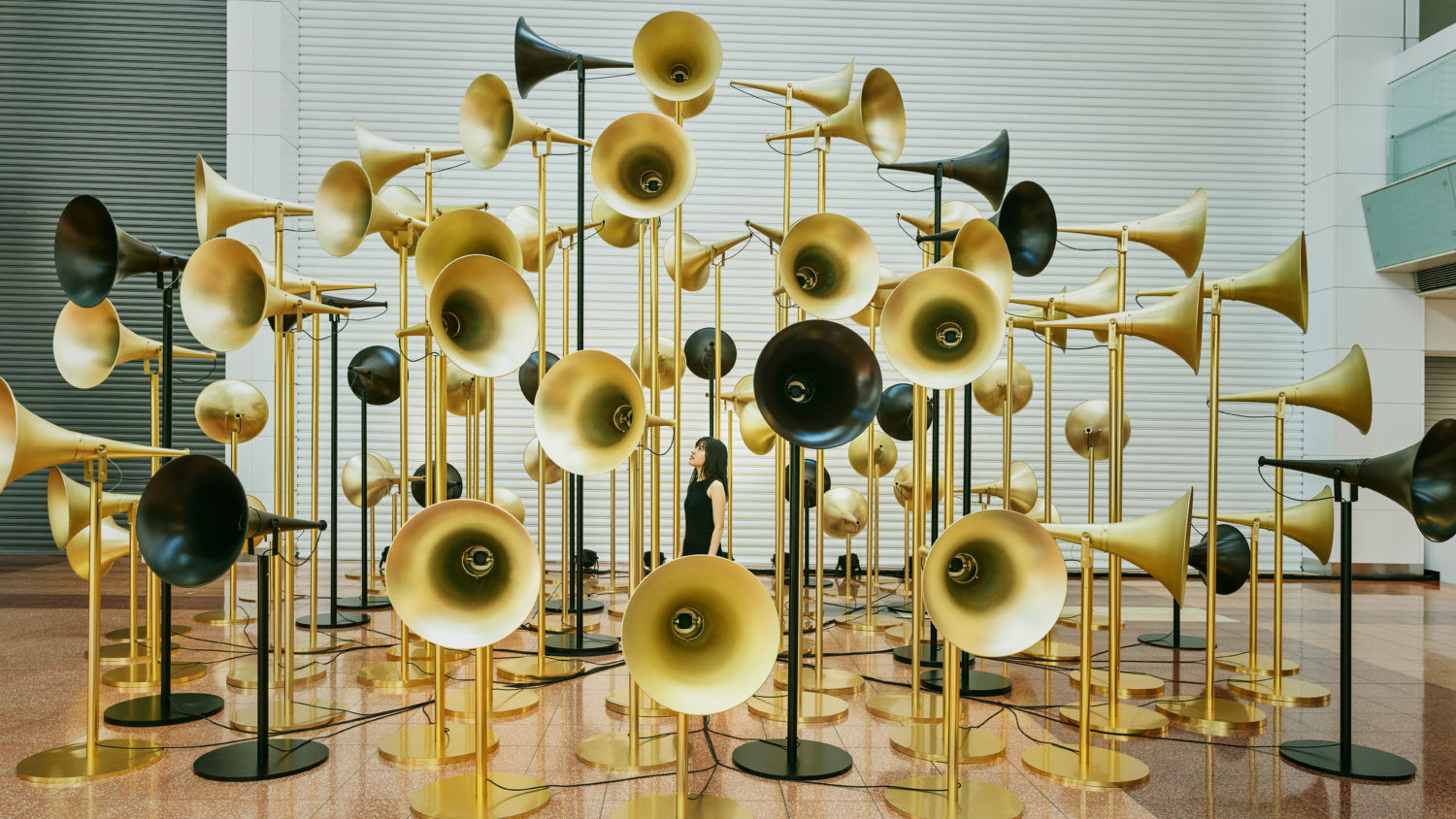 Can you tell us about your work presented for ‘VISION GATE’ and displaying it in an airport as opposed to an art gallery?

Yuri Suzuki: First of all, ‘VISION GATE’ is a very simple but very effective choice of title. The airport is the gate to Japan, and the first opportunity to be in touch with Japanese culture. “Crowd Cloud” first creates a sense of being welcomed. The installation constantly emits a selection of Japanese vowel and consonant sounds that were beautifully curated and sang by Miyu Hosoi. It does not recite any specific word, rather sounds that feel Japanese. Meanwhile, the visitor from another country can hear and discover the similarities with their language. It gives the exotic “Far East” feeling a new layer of familiarity. The installation consists of around 100 speaker horns that represent people as a “crowd”. Due to the pandemic, we’ve had to remain socially distant, even though the “vision” people have of Japan is that of a crowded country. Also, the word “crowd” reminds of “cloud”, which creates a link to the airport and the emotions associated with it. All speaker horns were beautifully anodized and plated by a craftsman. The gold color expresses the traditional Japanese representation of a cloud. Finally, the welcoming feeling in relation with this public place was a very important element. It should no provoke people, but give them an opportunity to transform from a visitor to an active audience. We wanted to create the right balance.

Miyu Hosoi: Our work, “Crowd Cloud”, created with Yuri Suzuki, was made with the aim of transforming the airport as the symbol of “a place where the languages of the world gather”. We separated the meaning of the words from the sound so that both oversea visitors and Japanese people could equally feel the sound of Japanese. I recorded each and every sound of the Japanese alphabet called “Hiragana”, sampled and reconstructed them.

My works are usually exhibited in places with unique acoustics such as anechoic chambers, public spaces, and outdoors, not so much in regular galleries. So I am usually very aware of the spatial environment and tend go for pieces that create awareness towards the space itself. For this project, I wanted the audience to be aware of this space, the airport. This work is the symbol of a “Crowd”, a gathering of people, and once the audience realizes the significance of what it is, they can also recognize that this work is now an extension and a part of the soundscape of languages in the airport. So depending on how you look at it, the whole airport can turn into one big installation.