I don’t really feel inspiration comes from me, but from somewhere else, a higher consciousness

David LaChapelle, dressed head-to-toe in black, is in the meeting room upstairs in Galerie Daniel Templon’s new space on Rue du Grenier Saint-Lazare near the Centre Pompidou. This is the American photographer who, early in his career, worked with Andy Warhol on Interview magazine and later created his own unique world of images, shooting celebrities in witty mise-en-scène for countless Vogues and other publications. Colour-saturated and dramatic, sometimes subversive and lurid, his pictures created a new paradigm of celebrity portraiture intersecting with fine art and fashion photography – think of Michael Jackson being cradled in an appropriation of Michelangelo’s La Pietà, titled ‘American Jesus: Hold Me, Carry Me Boldly’ (2009).

Yet, in a gesture reflecting his humility rather than his status, LaChapelle decisively moves his chair away from the top of the black boardroom table and positions it in the corner of the room for a conversational tête-à-tête. The act is symbolic of how LaChapelle, 55, retreated from Los Angeles in 2006 to Maui, Hawaii, in pursuit of tranquillity and spirituality. Turning his back on the glamorous, hedonistic, fast-paced life of decades past, he vowed to no longer shoot celebrities. Having bought a plot of rural land on which he is constructing a church, LaChapelle sets many of his images nowadays amid the lush forests and cascading waterfalls of his idyllic surroundings.

His latest “New World” images in his “Letter to the World” exhibition revisits biblical themes and draw inspiration from classical painting, whilst continuing the tradition of the nude in nature. The painterly style is owed to how LaChapelle painted over the negatives, a technique that he had first developed in the late 1980s in works such as’Abel Forgiving Cain for Killing Him’ (1989) and’Glorify’ (1989) of three golden nudes against a fuchsia backdrop.

Several of the new photographs feature his friend, the Ukrainian dancer Sergei Polunin, his deep turquoise body reclining on a tree as he plays a trombone in ‘Make A Joyful Noise’ (2015). Meanwhile, his longstanding muse Amanda Lepore, one of the first transgender models and performance artists, appears as a Madonna in “The First Supper” (2017) – an exuberantly lush, ironic take on depictions of the Last Supper in the history of art. The images are all included in LaChapelle’s book ‘Good News. Part II’, published last year by Taschen.

Downstairs is a medley of earlier works, where the ghosts of Jackson, David Bowie and Princess Diana mingle with Lepore snorting a line of a diamonds. Also on display is LaChapelle’s’s’ Self-Portrait as a House’ (2013), showing a lonesome figure consuming alcohol in a bedroom, another kneeling in prayer at the foot of a bed, a crowd of naked revellers in the living room, and a fat and a thin person surveying their respective food options in the kitchen.

What inspired you to revisit the painting-on-negatives technique that you developed in the 1980s?

I came back to this technique 10 years ago with the analog images that I’ve done for the “New World” series. I remembered this technique from when I was experimenting with color printing in the dark room – taking analogue and painting photo dyes – and thought it suited these images in combination with body paint in the set pieces. The fingerprints and the tactile things that you see on the pictures are refreshing and the opposite of the digital process. It’s nice to see the artist’s hand and it enhances the colors that are already in the image. 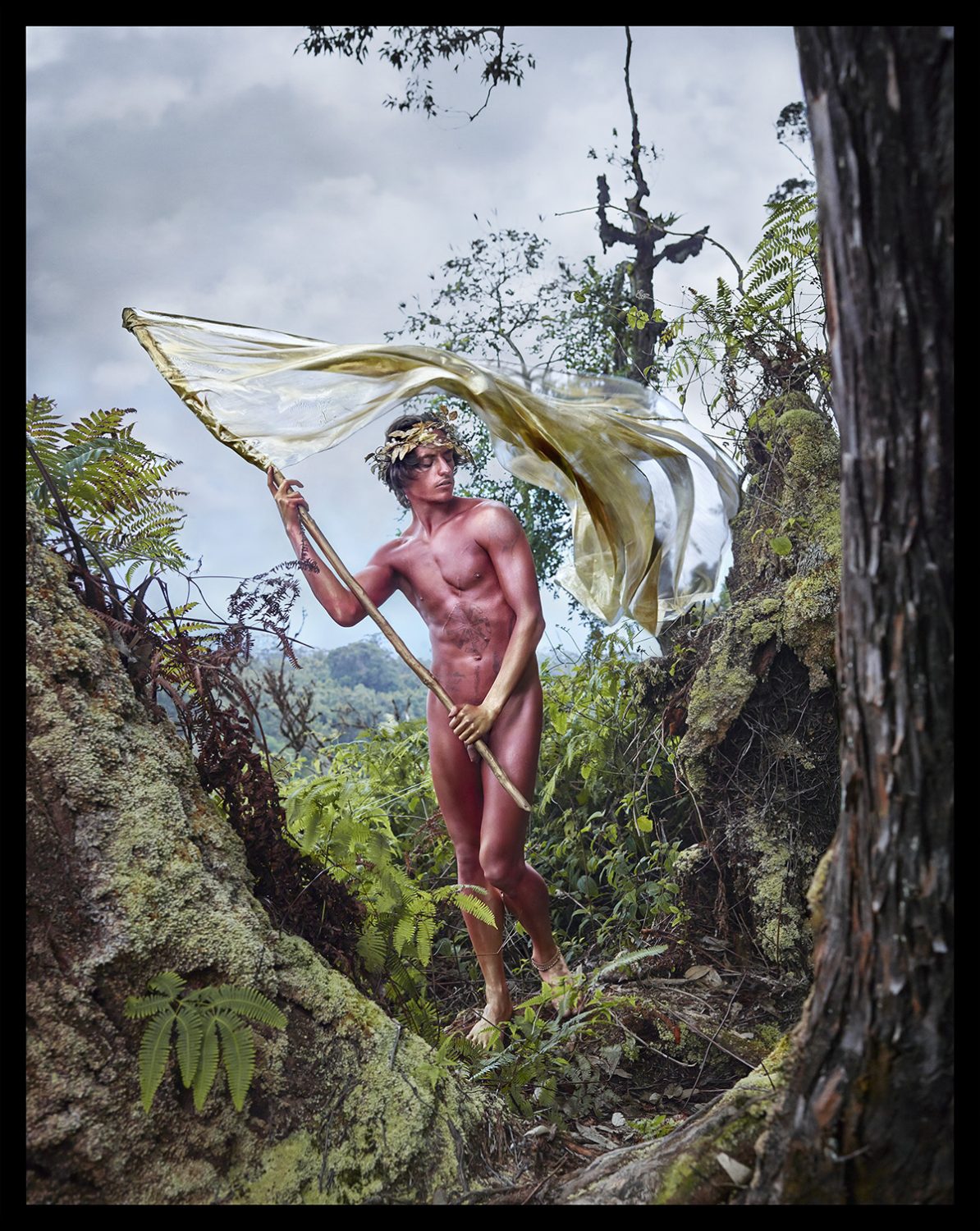 Your 1980s images as well as the “New World” series attest to your spirituality. Did you have the impression to be, metaphorically speaking, worshipping the golden calf in your work focused on consumerism and celebritydom?

I was always commenting on those things and I was in trouble with the fashion magazines because I was questioning all this consumerism, like with the girl addicted to diamonds downstairs. At first I really loved how I went from galleries to working for magazines and was excited to be earning a living as a photographer. But this idea of happiness coming with your next purchase was something I started losing faith in. I realized that I was promoting this materialism and things became imbalanced. I love beauty and I think those things are part of civilization – from the Egyptians to the Aboriginal tribes who would braid their hair and spend hours on their makeup, as I showed in the film ‘Rize’ (2005). But when it gets out of balance, materialism gets too prominent in one’s life and I think we’re in that time right now being run by this greed.

What led you to create ‘The First Supper’ (2017) rather than make a Last Supper?

If I look at my life and the 30 years that I’ve been working, there are chapters and it all makes sense from a narrative perspective. There are a lot of pictures, like ‘Deluge’ (2006)[inspired by Michelangelo’s ceiling fresco in the Sistine Chapel], dealing with this apocalypse, the idea of the end of times. The “New World” is the idea of humanity beginning over; “The First Supper” is the idea that no one has to die because there’s no more sin. It’s man being in harmony with nature, in the light rather than the confusion and the darkness that we have today. This show is the idea of man and nature in harmony, in this idyllic nirvana or heaven aesthetic.

Do you feel that you’re living in harmony with nature now?

Myself, personally, yes, I try to be; that’s the goal. I’m trying to do this thing; we all have to do our best. The “New World” are aspirational images in the sense that I’m striving to create this world in my dreams and my mind.

Do you often envision your images in your mind before thinking of making them?

Yeah, I don’t go looking for inspiration but sometimes an image will just come to me and then I’ll manifest it and create it. But I don’t really feel that it comes from me but from somewhere else, a higher consciousness. It just drops in my head at the least unexpected times. 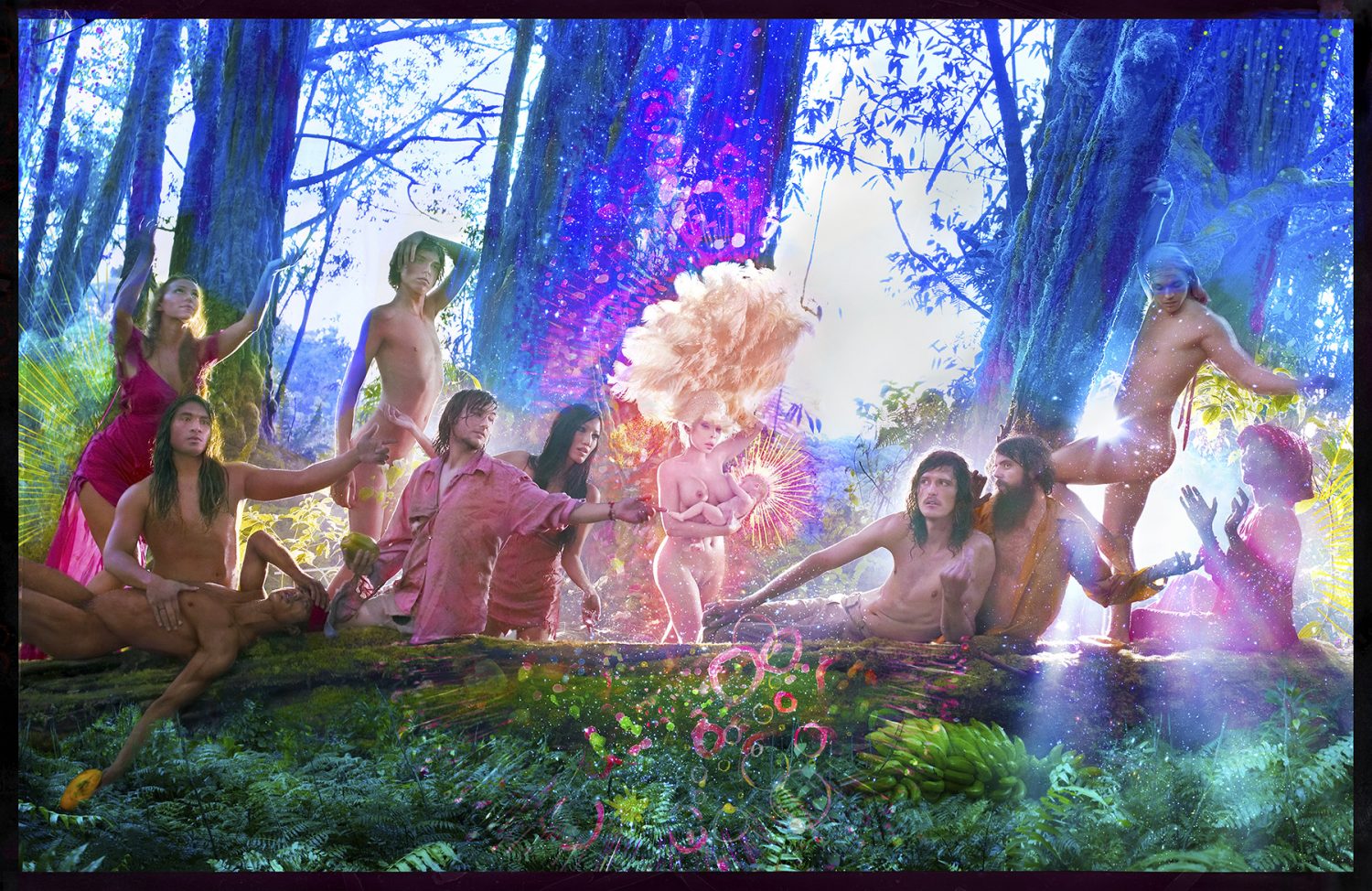 How much do you plan out the images and do preparatory drawings?

I do plan out the images a lot with thumbnails and drawings. But I leave a lot of room for spontaneity because one of the great things about photography is working together with people in a group and letting things happen spontaneously. Every time there’s a big group shot, there’s a lot of directing going on with other people. I get a dynamic in the image that makes sense compositionally and captures the tension.

You’ve said that you’ve wanted to reclaim Christianity from American fundamentalists and evangelicals. Could you elaborate on that?

It’s mostly done with irony. We’re living in an unshackled time but if you talk about Christianity or ideas like that to people in fashion, they’re kind of shocked, you know. They look at you as if you’re one of those[rolling eyes]. Christianity in the’80s in America was politicized by the evangelicals lining themselves with the Republican party so they were very anti-gay and anti-women. First of all, it[Christianity] shouldn’t be politicized so we’re claiming it from that and how fundamentalism destroys it. I feel the main religions of the world have a lot in common. Buddhism and Christianity are very, very similar and some people even believe that Christ studied Buddhism when he was a young man. I believe this is the first time in history where we’ve turned our back on them[religions] and believed in a more materialistic than spiritual way of life and that’s why we’ve gotten ourselves where we are today in a very precarious time.

Is it true that you’ve built a church in Hawaii?

Yeah [laughing shyly]. It’s not ordained. It was supposed to be a little chapel but it grew a little bit bigger and turned into a church. We’re still finishing it; we still have a little more to go. We just built it ourselves for people that live on the ranch. In the video ‘Take Me To Church’ [that I directed in 2015], you have Sergei Polunin dancing to Hozier’s song and that’s the church.

What was your motivation in situating the nude figure in nature in your new photographs?

With the figurative, the body in photography – particularly the nude, most people immediately think of something erotic or pornographic or something to buy and sell – it’s very commodified. So I wanted to use the medium I work in to claim the notion that it can be more than that and do something very different with the figure in nature. I wanted to see a fresh take on the nude in photography and not have it just be a cliché of some of the nudes we’ve seen before, whether it’s cheesecake[photographic display of shapely and scantily clothed female figures] or beefcake[photographic display of muscular male physiques].

What inspired you to make’State of Consciousness’ (2018) featuring a George Harrison of The Beatles lookalike?

He’s a hero of mine. To me, he’s somebody who really employed spirituality in his artwork and in popular culture, and he also had a very strong spiritual message. People would ask me,’Who do you want to photograph?’ And a lot of the people I wanted to photograph are no longer around but are from different eras. So I started a series with Walt Whitman[the American poet], George Washington Carver[the African-American agricultural scientist and inventor] and George Harrison. This is the first time that I’m showing any of these. There a few more people coming down in the series, like Sister Corita Kent – a Catholic nun who was one of Andy Warhol’s favorite artists. It would have been her hundredth birthday this year. I’d heard from Andy, when I worked at Interview, that he was friendly with this nun who made art but I didn’t know her work until recently when I went to this museum show in Pasadena, California. It was really exciting. Her artwork really changed me and had a big impact on me. 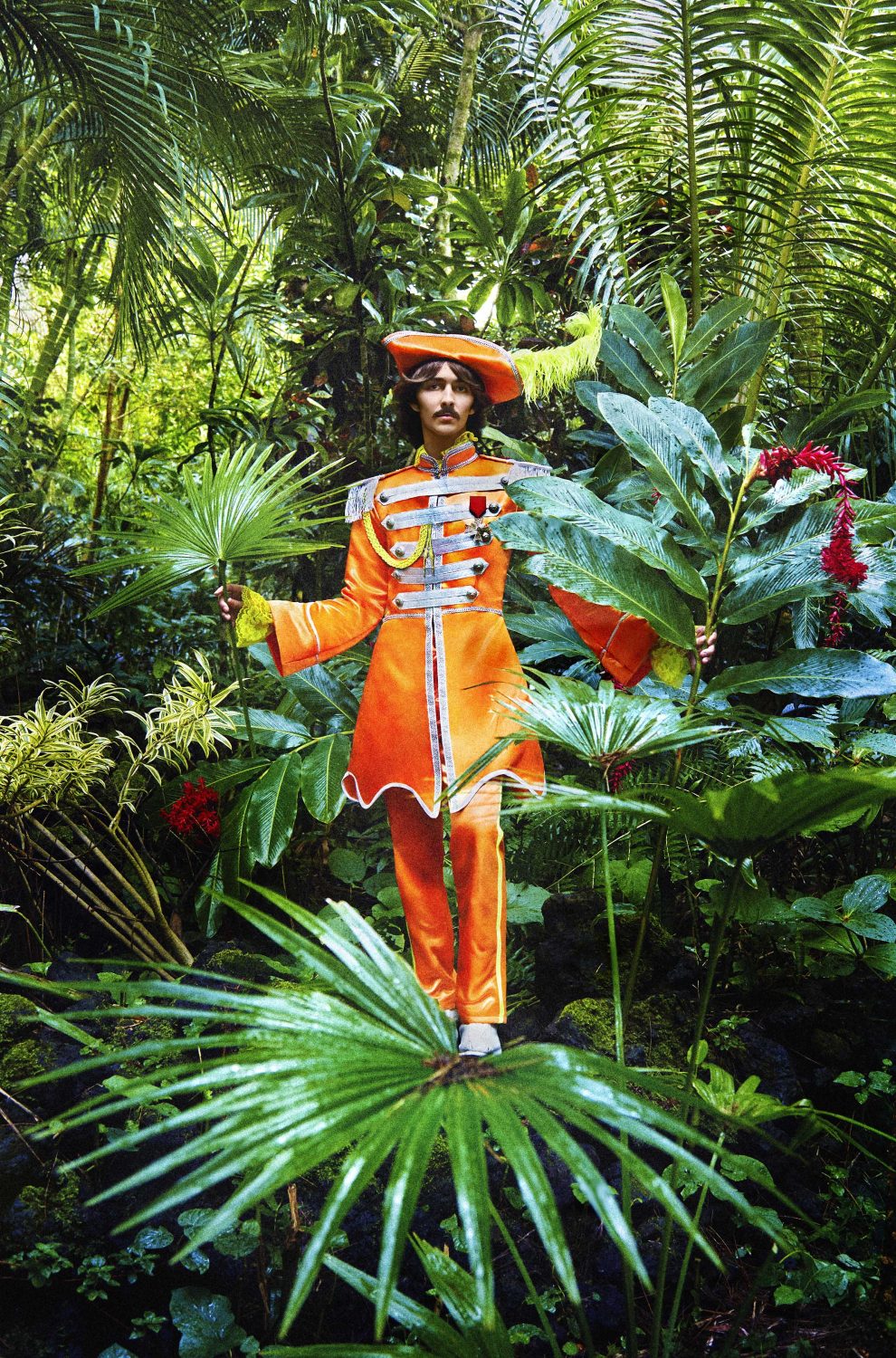 What can you tell us about’Seismic Shift’ (2012) and this apocalyptic vision of artworks by Jeff Koons, Takashi Murakami and Damien Hirst in a flood?

As part of my “Deluge’ series[of flooded museums], I wanted to do a contemporary museum. So I chose the one closest to me in Los Angeles, which happened to be the Broad Museum that’s built on one of the biggest fault lines in California. It’s very unstable if there’s an earthquake because of where the plates are. It wasn’t about the artists so much although I singled out artists in the museum’s collection.

What was your starting point for ‘Self-Portrait as House’ (2013) and do you think this image is true for how you see yourself today?

People have asked me to do self-portraits before and I really don’t like getting my photograph taken. So I just envisioned a Freudian etching of a brain and the different parts, like anger and memory, and I gridded it off like that. So the idea stemmed from this house with the different rooms of your mind or psyche. I think out of the parts of those rooms that exist, some of them I’ve been trying to control or suppress or diminish and parts of them I’ve tried to expand.