The day I’ll say: ‘It was better before’ is when I’ll stop

Twenty years ago, Kamel Mennour opened a small, eponymous photography gallery on Rue Mazarine in Saint-Germain-des-Prés, exhibiting Larry Clark, Martin Parr, Araki, Annie Leibovitz and Ellen Von Unwerth. Then a few years later, he set his sights on representing some of today’s leading artists. His gallery’s twentieth anniversary party last month at the Ecole Nationale Supérieure des Beaux-Arts was testament to how, against the odds, he has become one of Paris’s most prominent dealers. Born in Algeria in 1965, Mennour moved to France with his parents when he was three years old and grew up in Montreuil. After studying economics at the Sorbonne, he developed the ambition to have a gallery. Today, Mennour has three spaces in Paris and one in London. His gallery represents 38 artists, from Daniel Buren, Anish Kapoor and Lee Ufan to younger artists such as Camille Henrot, Alicja Kwade and Neïl Beloufa and mid-career artists like Claude Lévêque, Tatiana Trouvé and Ugo Rondinone.

Why did you want to become a gallerist?

I had a small job that consisted of selling small, commercial lithographs. I told myself that this art world, which was foreign to me but completely inspired and fascinated me, was something I absolutely wished to join. I felt that it was where I wanted to live in the future. As I didn’t have an artistic background, I did an enormous amount of reading, everything from business to art books, because I had such a strong desire to have a gallery one day. I was 24 or 25. My first exhibition on the Czech photographer Jan Saudek took place 10 years later in 1989 in a small gallery on Rue Mazarine.

Initially, you specialised in photography. Why did you want to switch to contemporary art?

After showing many photographers, in 2003/2004 I realised that photography was too narrow a field. I had the impression by always exhibiting images of repeating a lesson I’d already learnt. I felt imprisoned. So I brought artists of my own generation and younger artists into the gallery: Camille Henrot, Latifa Echakhch, Claude Lévêque… A few years later, we brought in established artists such as Daniel Buren, Anish Kapoor and Huang Yong Ping.

In 2007, you inaugurated your space on Rue Saint-André des Arts with your first Daniel Buren exhibition, coinciding with his collaboration with Sophie Calle when she represented France at the Venice Biennale. How did you convince Buren to join your gallery?

On a plane going to South Korea! I’d met him at a dinner with a mutual friend, then bumped into him on the plane. During the seven-hour flight, we sat together the whole time. I was going to the Gwangju Biennale and he was going to Seoul [for a solo show at the Whanki Museum]. During this Paris-Seoul flight I convinced him to join me. [Kamel Mennour clicks his fingers twice]. He was leaving Marian Goodman, several galleries had invited him to join them and I was lucky enough to be the most convincing.

How have you developed your stable of artists?

The gallery is a construction of a team, a coherent or not so coherent family: confronting young artists with not so young and more established artists. When we prospect artists, we look at which artists we already have to see if there’s coherence and something that would enable them to navigate in this sort of family. It’s been about me personally adding one card after another. I’ve proceeded step by step, not by clicking my fingers. My eyes are always open. I reflect for a long time before inviting an artist to join the gallery, which is why I think that our artists have been predisposed towards joining us. It’s practically always been me who’s gone towards them. When I propose them to join, it’s after one, two or three lunches and visiting their studio. A kind of alchemy creates itself. Very few artists have refused or have left after joining. For me, being a gallerist is a serious vocation. I remain extremely faithful to my artists and want their identity to be recognised and understood. 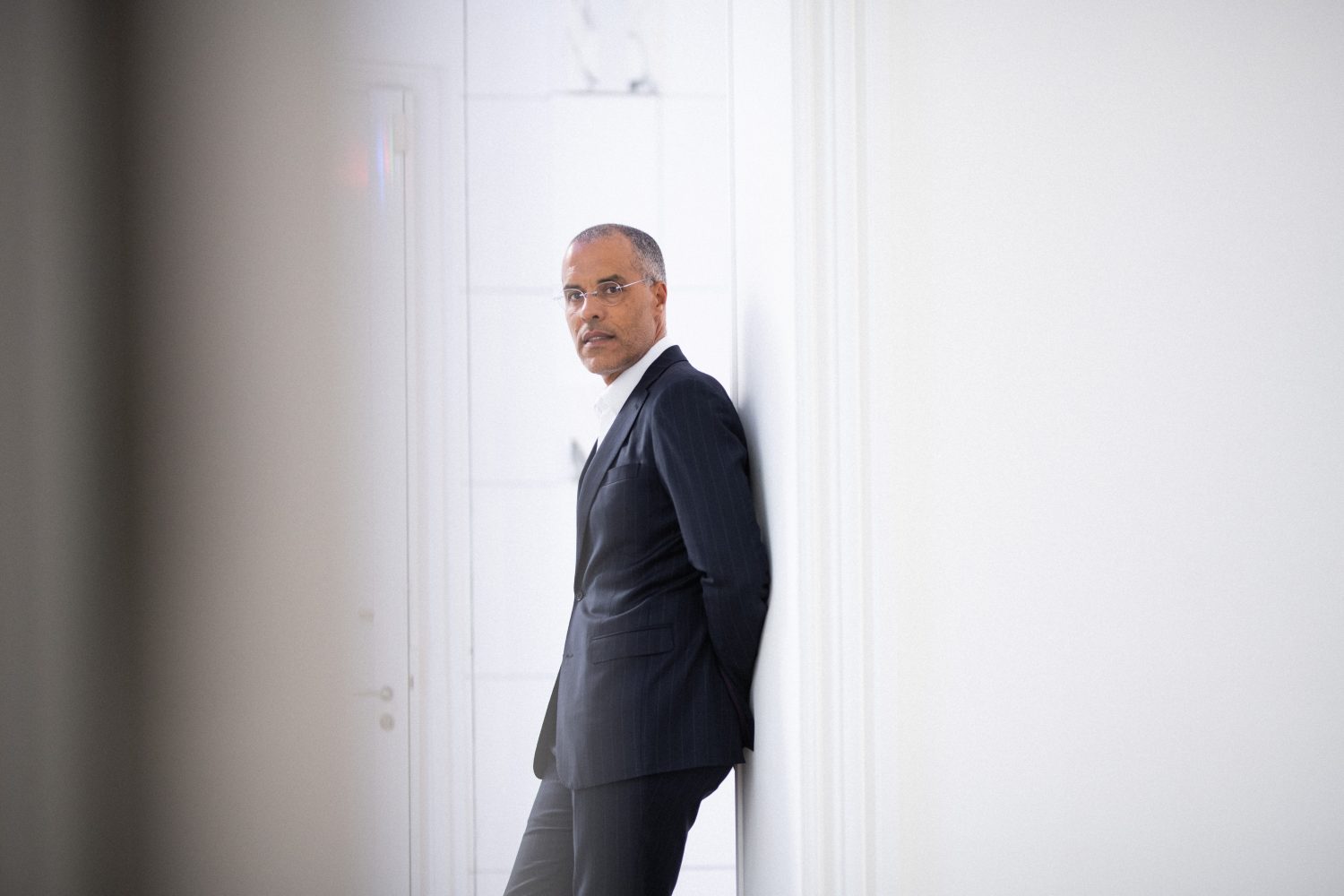 What kind of identity do you aspire to give your gallery and which artists attract you?

A gallery that’s close to the preoccupations of our era. Like in our previous group exhibition, ‘Eté Indien’, which showcased artists who work on recycling, Neïl Beloufa and Mohamed Bourouissa who work on the world we’re in, Hicham Berrada who reflects upon mankind and Camille Henrot who reflects upon who we are. The artists that attract me are witnesses to our era, ask questions about our world and give a sense of temporality or pulse of our time.

Some people are critical of how you represent artists that were previously with other galleries. What would you say in reply?

The world is open! Tomorrow perhaps one of my artists will tell me that they’re leaving. That’s life. It’s the porous world we’re in.

What do you think about the idea of having contracts between artists and galleries?

I’ve often asked myself about that. It’s a real question because galleries have become production sites with investments and risks. The problem [when artists switch galleries] often isn’t between the first and second gallery but between the first gallery and the artist, how one of them might owe money to the other. It’s quite complex.

Sotheby’s and Christie’s have both launched “online only” sales. Have you considered launching an online sales platform?

We’re not going to open a department in that line of business yet. For the moment, I’m still a classical gallerist. I like the relationship with people. But we need to see how things evolve.

Some gallerists lament that they have fewer visitors in their galleries because so many people only visit the fairs. What’s your opinion?

Today we have very sharp and precise exhibitions in our spaces. We’re careful and self-demanding so we can offer our artists the best platform of expression. But part of our business is the fairs; we seize this opportunity because one needs to understand how the world is evolving and not be nostalgic. One can’t compare a gallery from 1930 to one from 1980 or 2020. Before there were two places in the art world: Paris and New York. Now the art map is worldwide.

A few years ago, you opened a space in the West End of London. With Brexit looming, will you keep it?

Our space in London is extremely small, intimate and well located. We used to have a large apartment there where we held dinners. We’ve dropped the apartment but kept the gallery. It’s important to maintain our presence in London.

Have you thought of opening a space in Algeria, the country of your origins?

I’ve always observed what’s happening there but it would be false to say yes. I’ve always believed that I talk to the world. I run around. Last month, I went to Aros Aarhus Art Museum for Douglas Gordon’s show, another weekend I went to Los Angeles. I do many different kinds of things: seeing exhibitions and fairs and visiting artists’ studios. We’re organising our fourth charity  auction [with proceeds going to Institut Imagine for genetic illnesses] in March/April.

What lessons have you learnt during the last 20 years?

Keeping a childlike soul with the willingness to make things happen. Being demanding, perseverant and tenacious. Always looking at the future with softness. Twenty years ago, I was in a small gallery and there were very few fairs. Today, there’s globalisation [in the art world], an acceleration and interconnection between galleries and institutions, museums and foundations.

What are your predictions for the next 20 years?

I have no idea what will happen in the next 20 years! Will I still be a gallerist? Or will I be doing this job differently? Perhaps I’ll have a foundation. If I look at the Kamel I am today and the Kamel I was 20 years ago, it’s not the same thing. I’m 55 now. I’m not going to repeat the same path. I live in my era and surf around. I like the idea of adapting, anticipating and forecasting. The day I’ll say: ‘It was better before’ is when I’ll stop because it’ll mean that there’s no more joy, pleasure or happiness. Because this profession is about transmitting one’s desire and passion. My dream is to have as much pleasure in the coming years as in the last 20 years.