“Every stone should cry”

The work of an artist is not the same on a set as it is in an exhibition space, and the border between those contexts is where I want to be

This is not the first time Théo Mercier has worked with the Musée de la Chasse et de la Nature. Just ten years ago, the young artist—then relatively unknown—presented a solo exhibition at the Parisian museum at the request of its director, Claude d’Anthenaise. Today, Théo Mercier has made a name for himself not only within the art world (notably for his work entitled “Solitaire”) but also in the theater world. His latest production, “Affordable Solution for Better Living,” in collaboration with Steven Michel, won him the Silver Lion at the 2019 Venice Biennale. Now, with his cabinet of curiosities-style exhibition “Every Stone Should Cry,” the artist is raising questions around man’s domestication of nature. Working between these two different creative practices, Théo Mercier enjoys straddling both, often collaborating with artists like Erwan Fichou, Arthur Hoffner and Grégoire Schaller. We met up with the artist to discuss his hybrid approach.

You presented your very first solo exhibition at the Musée de la Chasse et de la Nature ten years ago. How did you end up back to the museum, and how did you feel about this exhibition?

I have been in contact with Claude d’Anthenaise, the museum’s director, since the beginning of my career as an artist. Indeed, ten years ago I was invited to take over one room on the first floor. I had proposed a kind of fairground exhibition, like a well-staged ecological freak show. Ten years later, I was invited to take over (almost) the whole museum. My exhibition showcases how the concerns within my work have really changed. I initially started sculpting by imagining anthropomorphic objects that imitated the human figure and body. Today, this anthropomorphization of the object still exists in my work, but perhaps in a slightly more abstract way. The body is expressed through a false move: a catastrophe, like a fall or a crash. I call my pieces “choreographic” because there is this dance between the viewer and the sculpture, which is very important to me. I imagine my installations as environments. This is particularly true with the room on the ground floor of the museum. In some places, the exhibition can look like scenery, and the visitor really becomes the actor within this environment. I try to find this “grey” in-between place, between dark room and white cube. The installation on the ground floor really puts the visitor in the spotlight. We’re between diorama, human zoo, behavioral observation laboratory… It tells the story of our contemporary relationship with nature, with animals. I approach the idea that we no longer live with nature, but with an idea of nature: an idea that is distorted, whether enlarged or shrunken down, but multiplied to infinity. Hence this “horizon-spreading”: this series of objects, which has been called an Encyclopedia of a Domestic Nature. 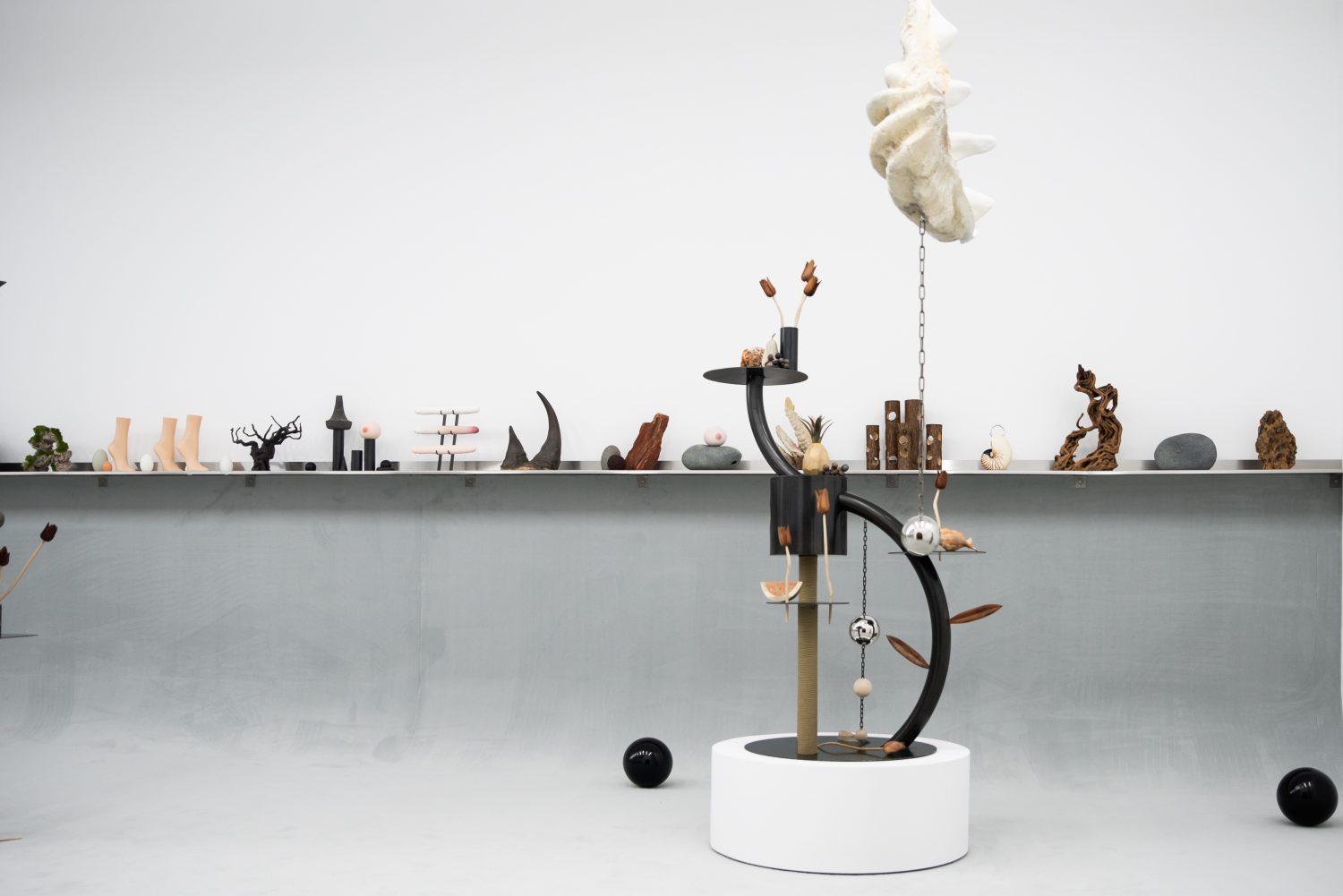 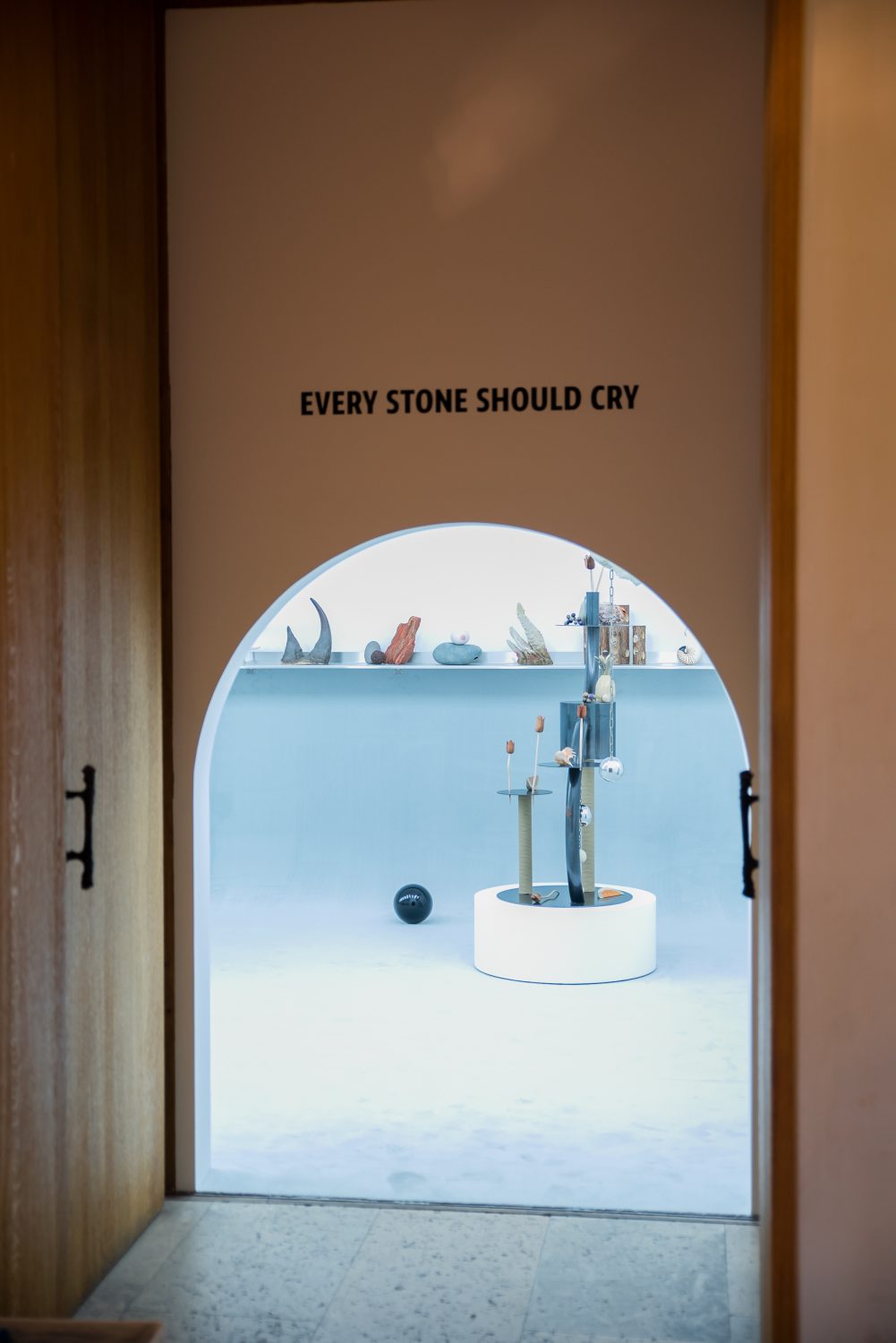 The exhibition—notably the installation on the ground floor—also shows your practice of collecting objects.

I do collect a lot of objects, but this piece really participates in flattening the hierarchies between the beautiful, the ugly, the precious, the rich, the old, the fake, the real… My work creates confusion in the production of objects, in the analogies and confrontations that address 40,000 years of human production.

Today, your artistic practice has extended into theatrical staging. Did this new facet of your work develop after you moved to Mexico?

No, it started after my time at the Villa Medici in Rome. That’s when I wrote my first show, “From the Future Let’s Make a Clean Slate.” It was a moment in my career when I wanted to encounter a different audience; I like new transformations, and I feel very comfortable with the idea of going through different mediums. I am interested in everything, and interested in invoking different magic. The work of an artist is not the same on a set as it is in an exhibition space, and the border between those contexts is where I want to be. It is the place I want to exist in: between two countries, between two practices… In my production of objects too, the question of the border is very present.

Two years ago, during your “Panorama Zero” exhibition at Galerie Bugada & Cargnel, you told us you tend to “work in cycles.” Is your latest exhibition a continuation of an ongoing cycle, or the beginning of a new one?

It is the beginning of a new cycle; the exhibition at Bugada & Cargnel represented the end of another. The cycle follows “Affordable Solution for Better Living,” my last piece, which received the Silver Lion at the Venice Biennale.

What’s the meaning behind the exhibition title “Every Stone Should Cry?”

There is a lot of talk about stones, and about object-transference—and animal-transference. There is also a lot of talk about our contemporary anxieties, our fantasies… The stone represents the forced humanization that we make nature undergo, in general. We push nature until a stone cries! Also, it sounds like the title of a song, and I like that. 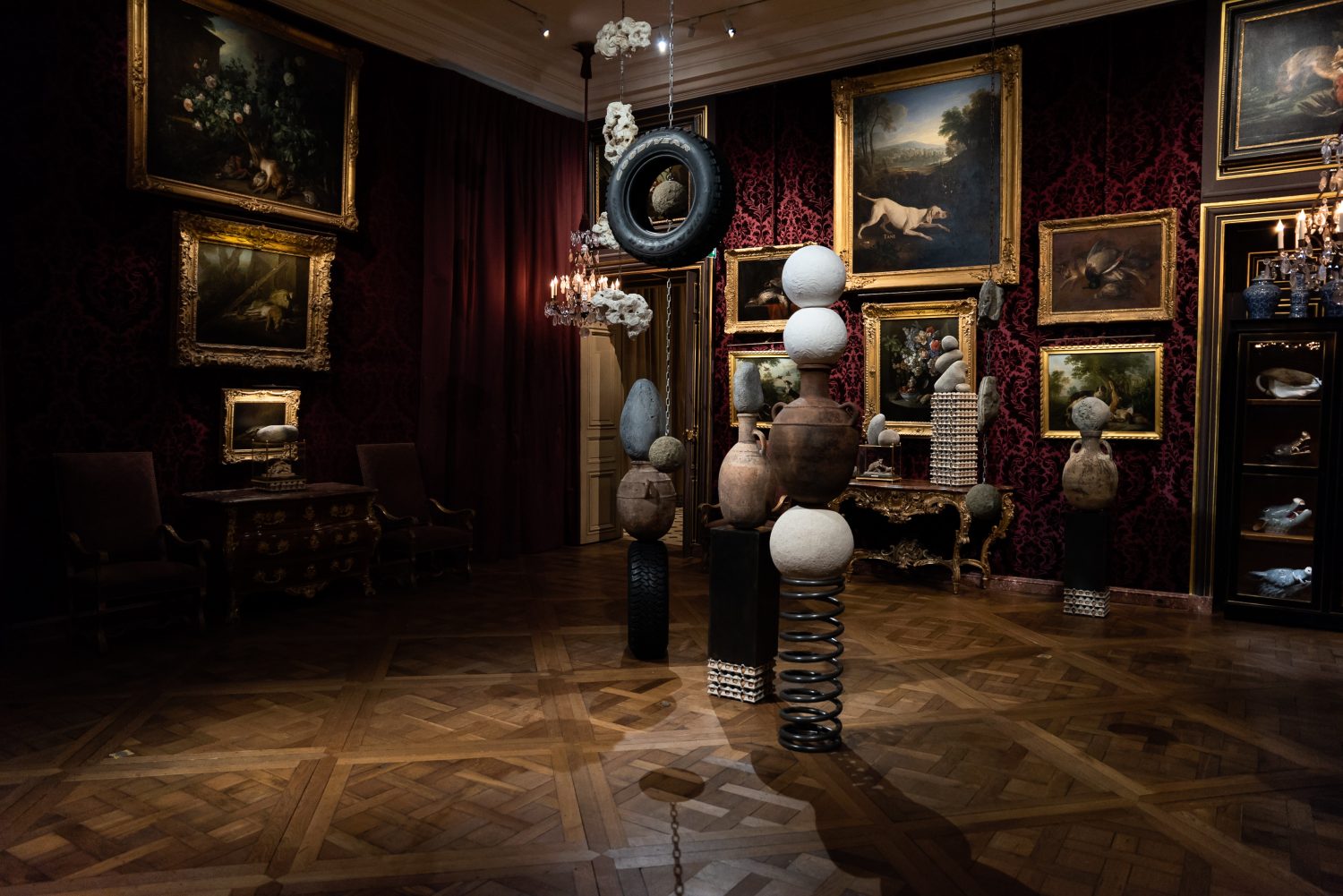 You inject humor into the exhibition, especially with the titles of your works. But is this also a way to alert the viewer to the world’s dysfunction?

Yes, I’m an “alerting” artist, in a way. One of my priorities, in recent years, has been to bring danger into the museum. It is a place of fiction, a place that does not really exist, where time stops. We are completely transformed when we enter a museum: we walk slowly, we don’t speak the same way, we have a different perspective. It is true that I establish a kind of dramatic tension between the viewer and the work. The viewer is potentially the last person to see the work before it falls over and crashes. There is the idea of this frontier, this precariousness, this fragility—of our lives, of our cities, of our love stories, of our societies. Of obsolescence.

You have often been called ‘the archaeologist of the future.’ Do you recognize yourself in this description?

Yes—and as an archeologist of the present, too. This is also true through the collections of stones, which are a bit like post-industrial geology… The stone has always evoked time immemorial, permanence. Here, the stones are hollow resins, reproduced to infinity and without any future. They evoke the trompe-l’oeil, the void, the disposable… the time in which we live! 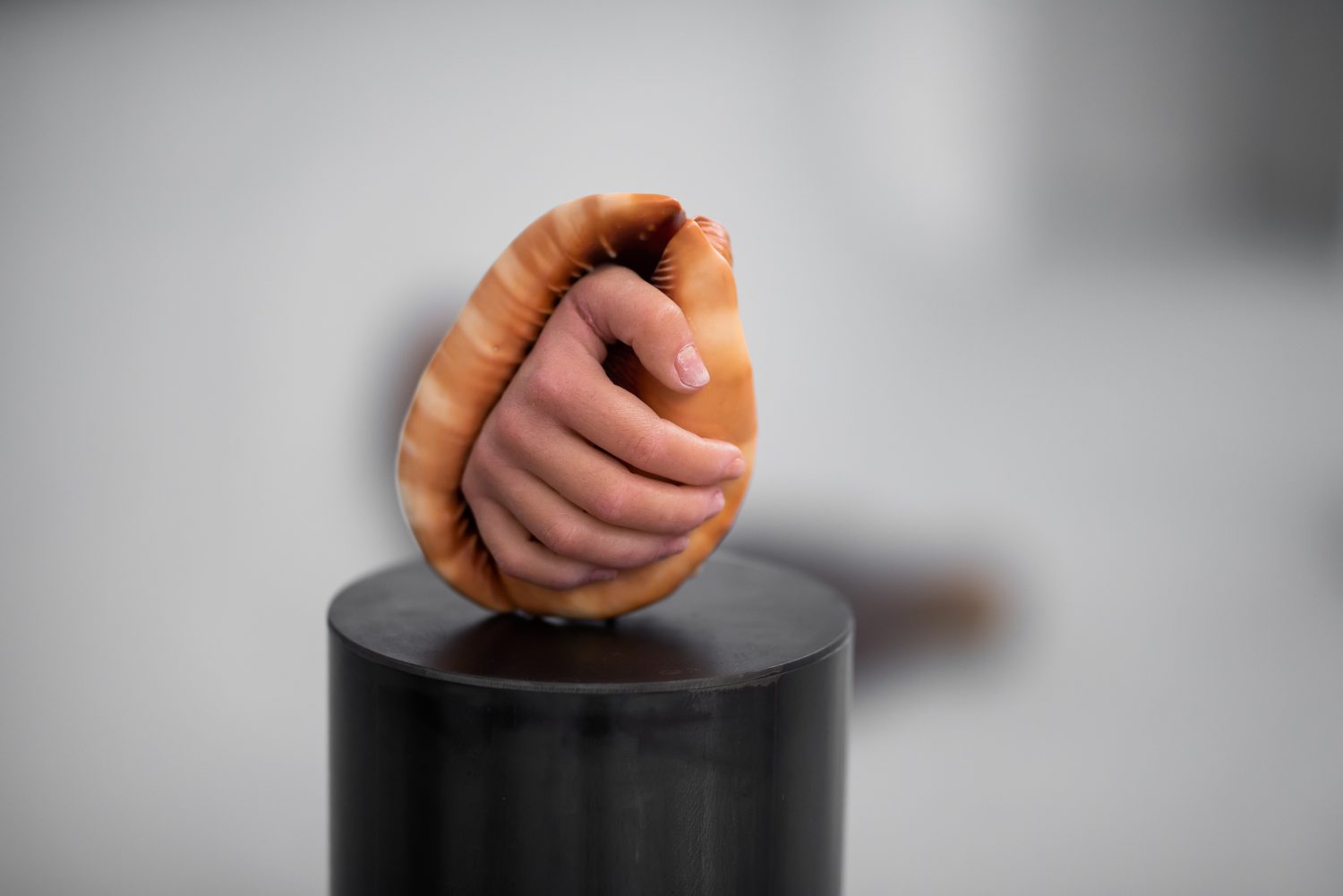 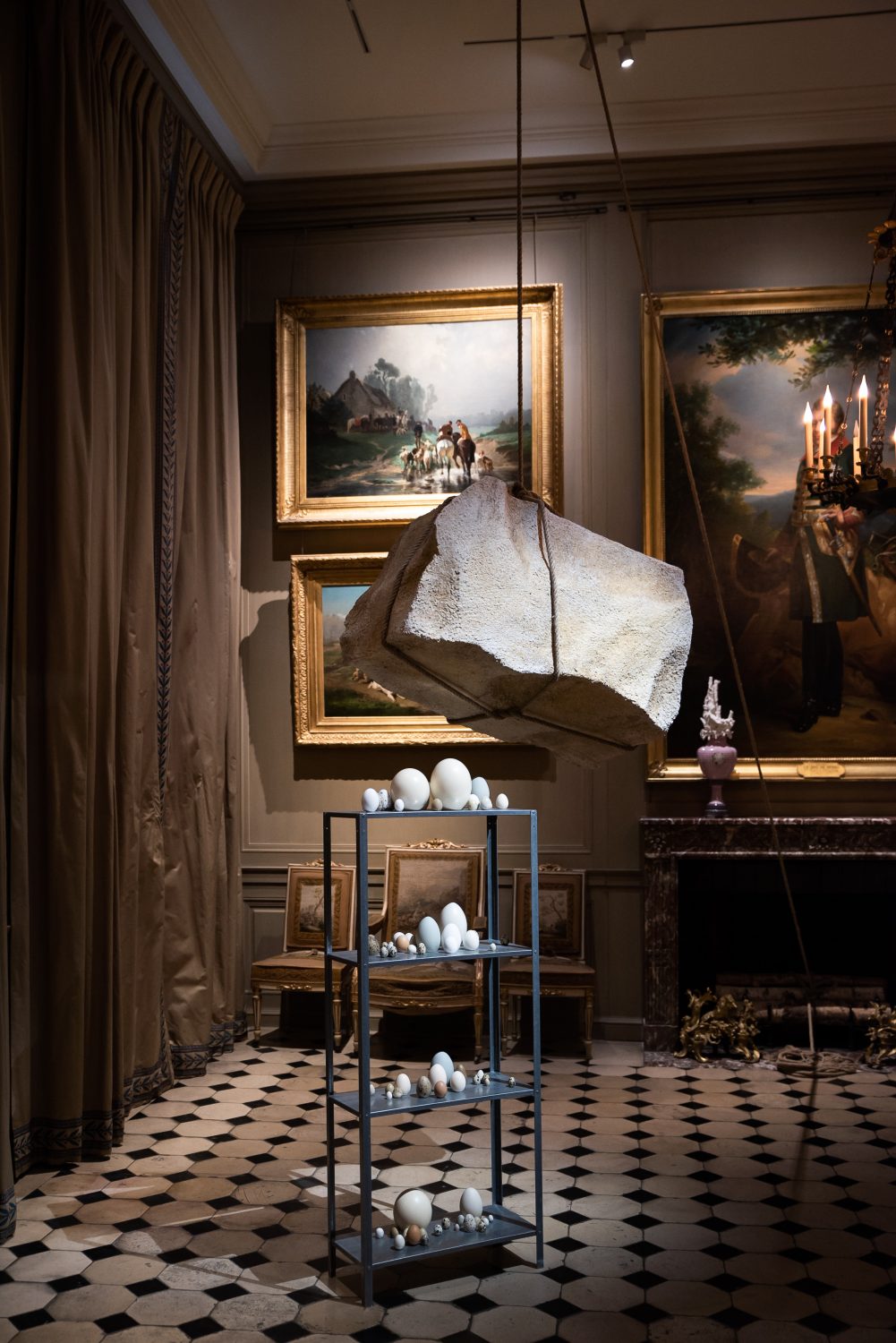 Can you talk about the performances around the exhibition and the artists you invited?

I invited Steven Michel, with whom I co-wrote “Affordable Solution for Better Living.” I invited Arthur Hoffner and Grégoire Schaller, who are two of my former assistants. I worked with Arthur for over ten years; he now has his own design practice, and it’s going very well for him. Together we made the small bronze in the museum’s inner courtyard—“Modern Art for Cats”—and I invited him to perform with fountains. Grégoire Schaller is a young director whom I worked with for two years. They’re like family! Jonathan Drillet and Pauline Jambet (who is replacing Marlène Saldana) will reproduce a scene from “La Fille du Collectionneur” in the museum. This was also an opportunity to showcase what is happening for me with artists outside of the museum. There will also be an evening with Laurent Le Bon, the director of the Picasso Museum.

Do you still live between Mexico and France?

No, I’ve been back in France for a year and a half. I closed my atelier there, but I will reopen it at the beginning of next year… It’s a new cycle that will begin!